As I wrote last Friday, I wanted a second opinion about the problems we’ve been having with our heating system. Our trainer suggested the company he’d used, A-1 Heating and Cooling, and they sent out a tech today, Steve.

He spent a long time in the attic, and when he came down, he had pictures and options for us. He showed video of the furnace lighting up and belching flames – it’s called “rollout,” caused by too much gas, and it’s not a good thing. There’s a rollout safety switch that senses it and turns off the gas; a bit later, the furnace tries to light again and there’s less gas, so it works. But it’s not safe. He reduced the gas pressure temporarily to avoid rollout, but that’s not a real fix.

He also found condensation that had leaked out of poorly sealed PVC pipes and was accumulating.

The good news is that he didn’t propose replacing the furnace, just the gas valve and resealing the pipes – it’ll cost about 15% of what it would cost to replace the furnace. So we said “yes”.

I didn’t get a chance to take a walk today, so I have no new photos; instead, I found a photo I took on this date in 2019, when we were at the Angkor Thom Temple in Siem Riep, Cambodia. Our guide posed us so we could hold up one of the faces carved into the walls of the temple. 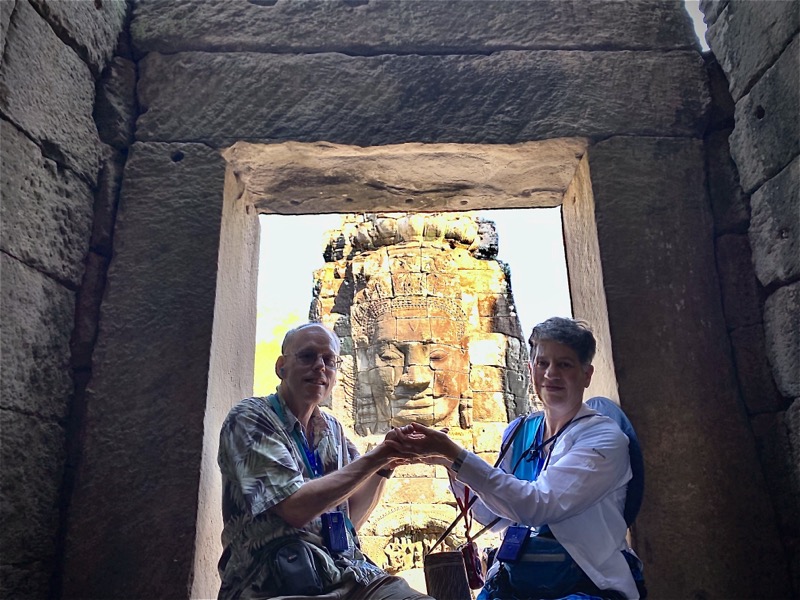