We had no firm plans for today other than to walk around Porto and see what we could see. We had a leisurely breakfast at the hotel and set out just before 10am.

Our first stop was the Igreja dos Carmelitas Descalços, one of two adjacent churches owned by the Carmelites – although a “Secret House” was discovered between them a few decades ago. The church is lavishly gilded. 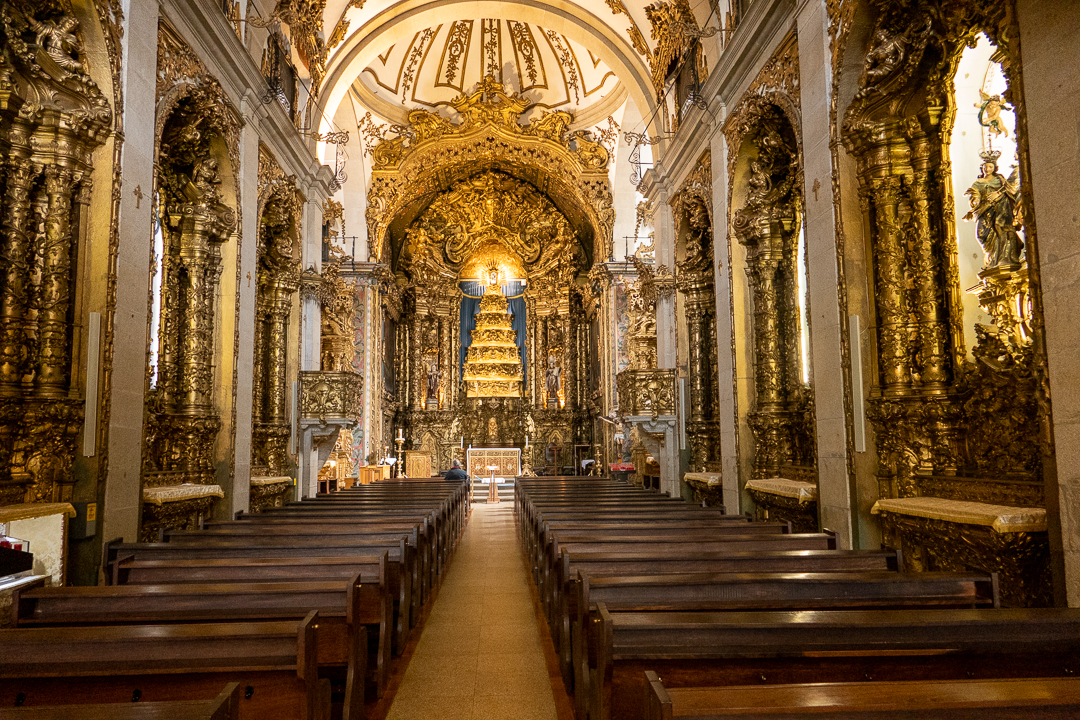 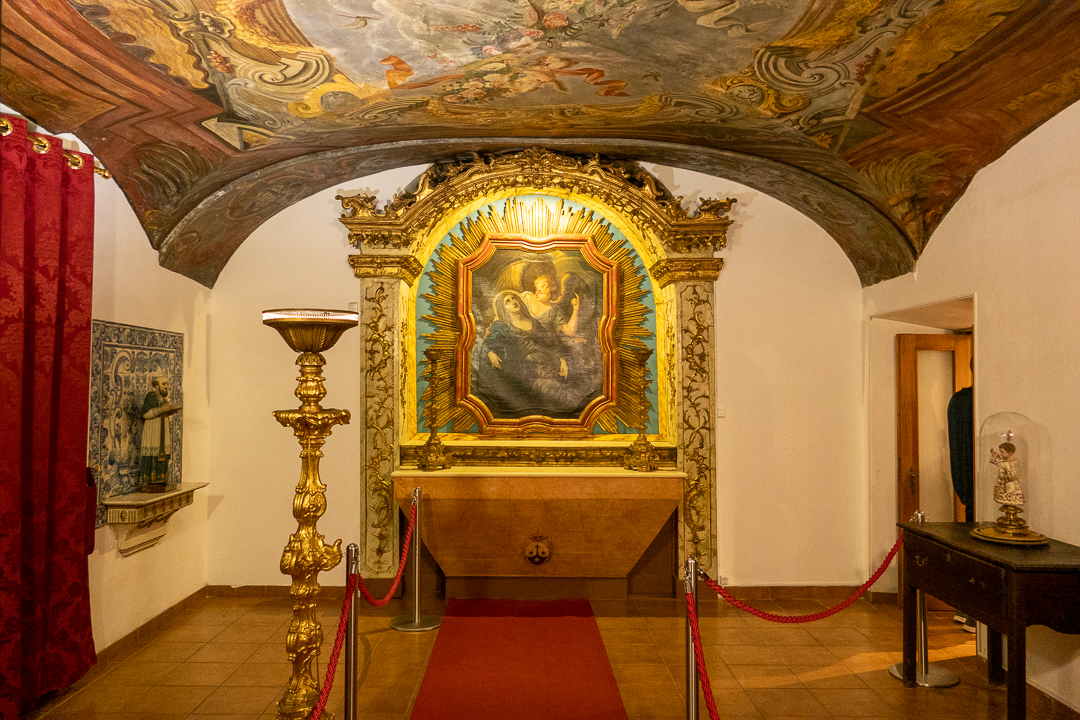 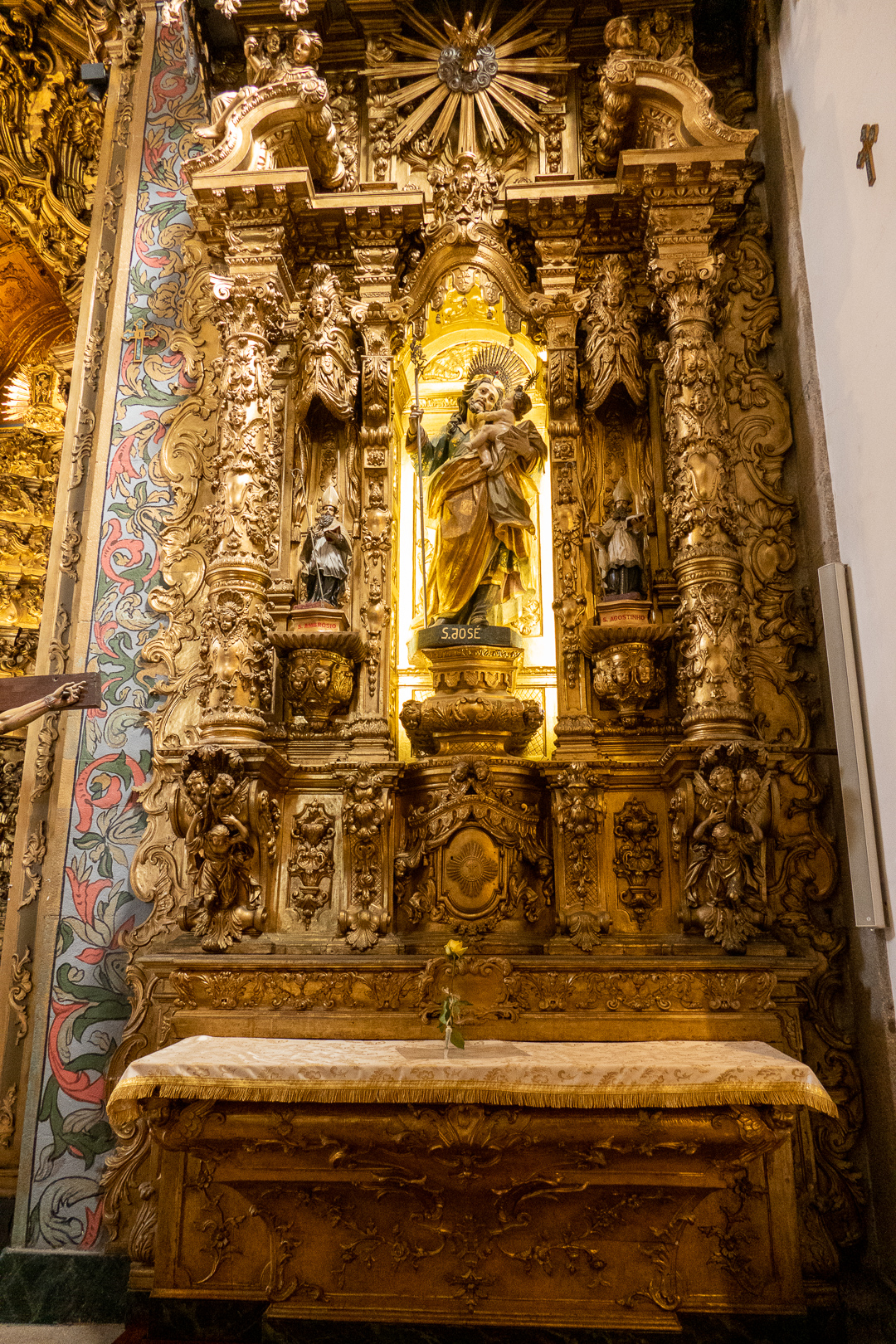 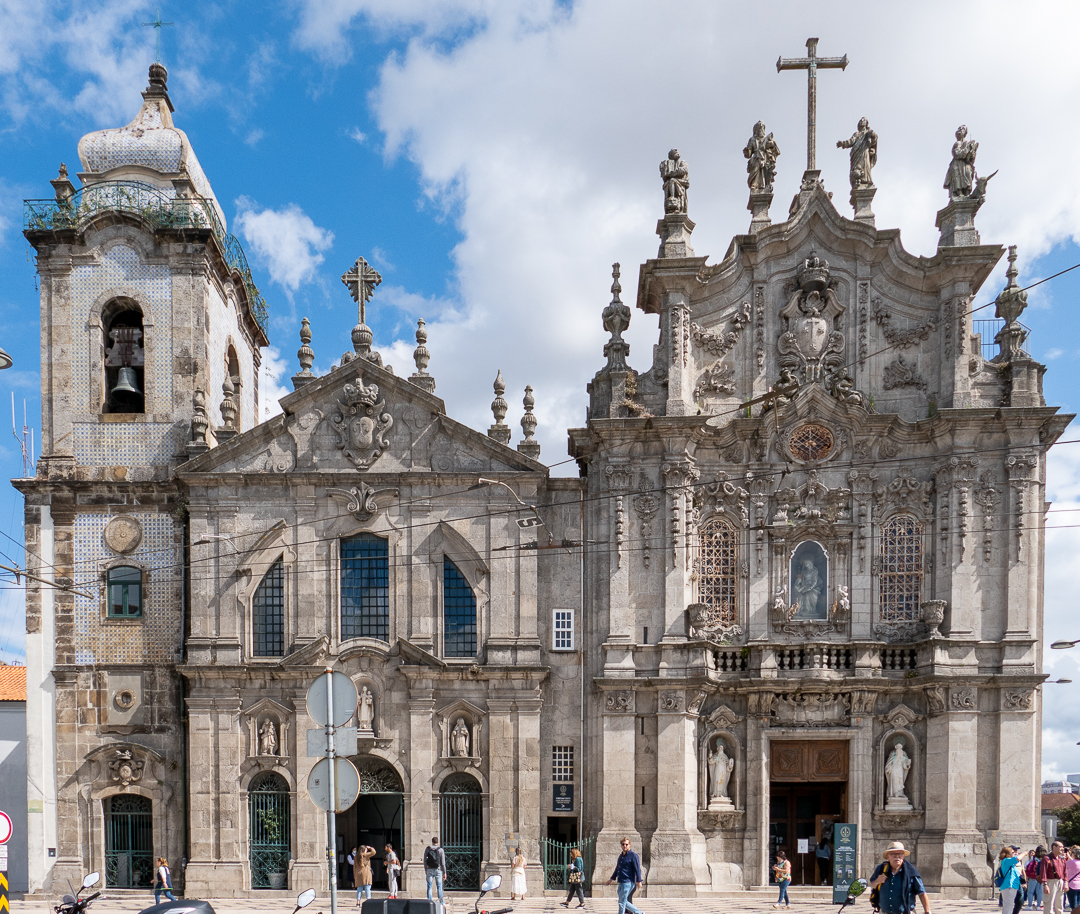 Our next planned stop was the Palacio da Bolsa (the former Stock Exchange); Google Maps offered us several walking routes with similar ETAs; we decided to take the one that led us through a row of sanctioned street vendors and a park. We escaped with wallets intact, and soon we were across from Porto’s very modern Justice Building. 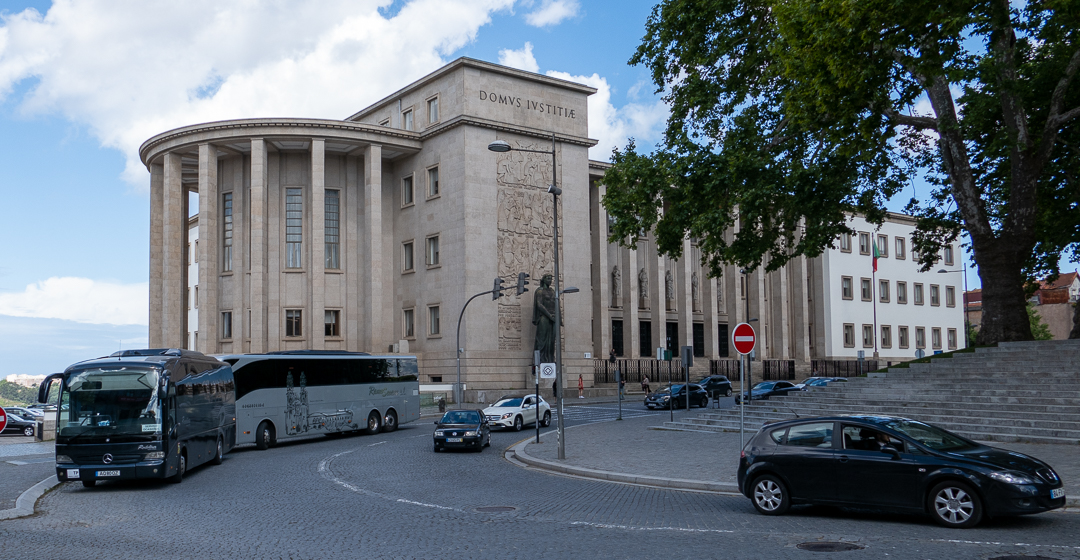 We then found ourselves passing the Igreja de São José das Taipas. We were going to keep walking but the sign outside said that there was a painting inside of the disaster of the Bridge of Boats, so we went in. I wasn’t surprised to see that the altar was gilded! 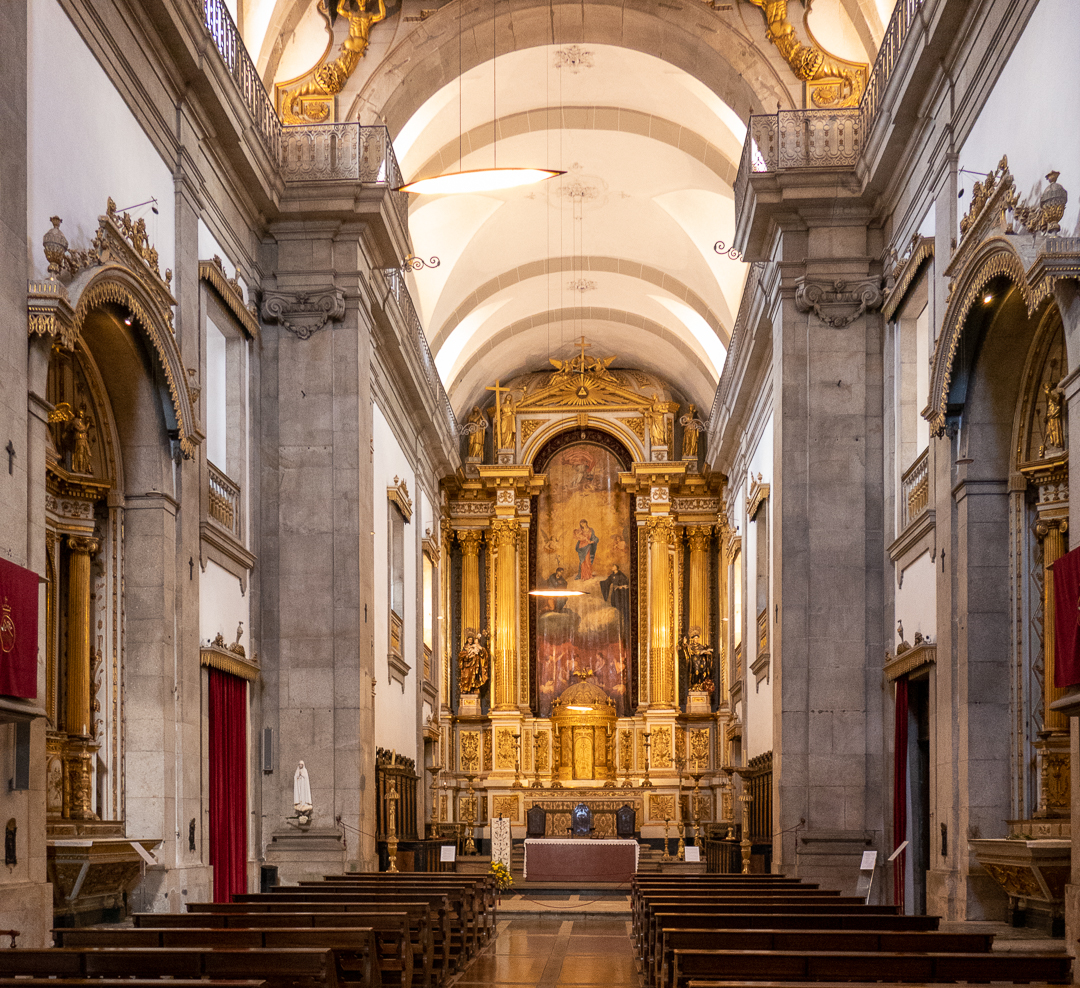 Thousands of civilians died in the first Battle of Porto during Napoleon’s campaign in Spain and Portugal when the “Bridge of Boats” that crossed the Douro collapsed under the weight of the people trying to flee the city. The painting in the church shows the disaster. 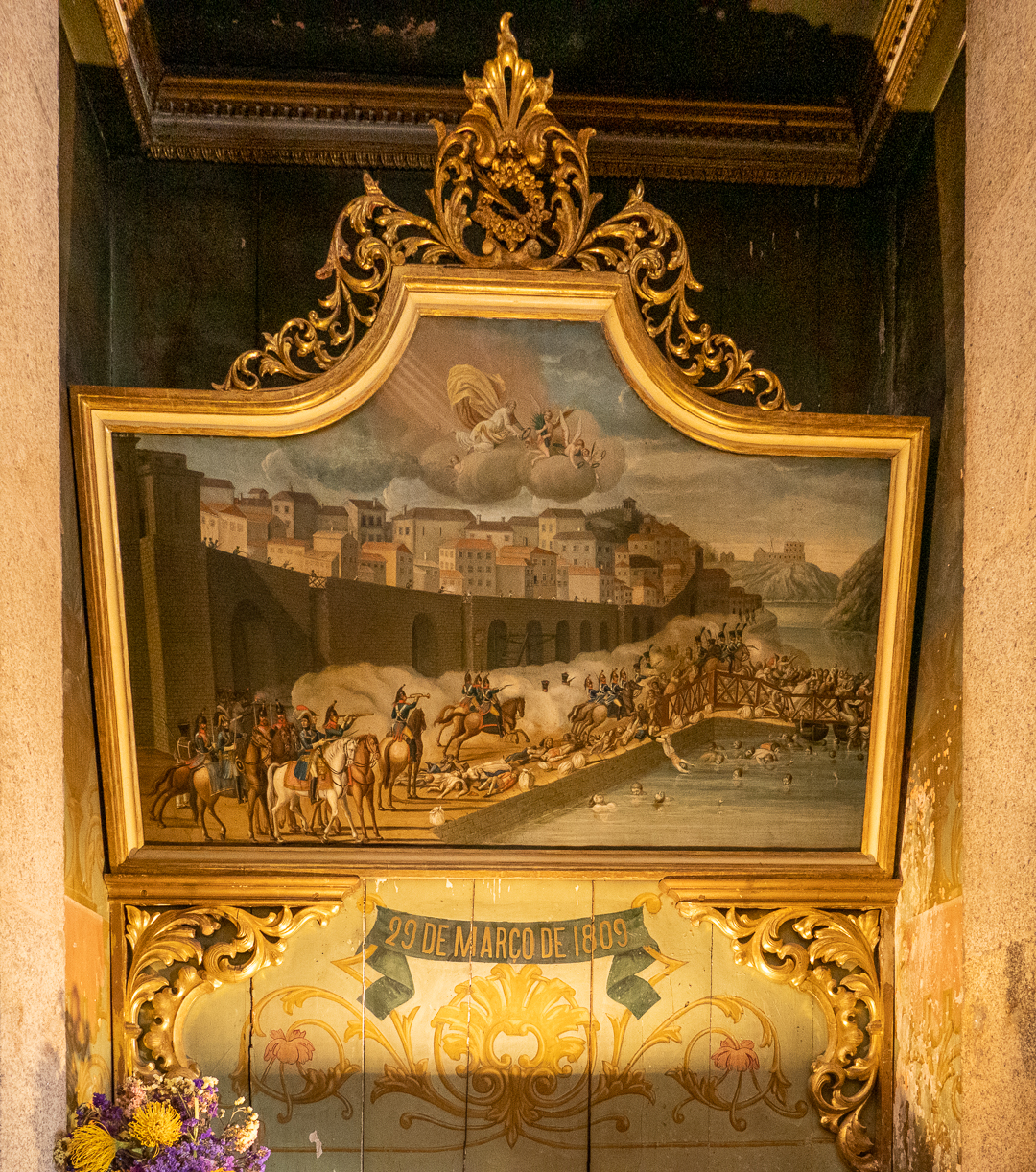 We avoided stopping anywhere else until we got to the Bolsa. The only way to see the Bolsa is on a guided tour, and we arrived with barely enough time to get on the only English-language tour on the schedule.

We began in the Court of Nations; it had a magnificent skylight and the coat of arms of twenty nations that were friends of Portugal at the time the room was built. 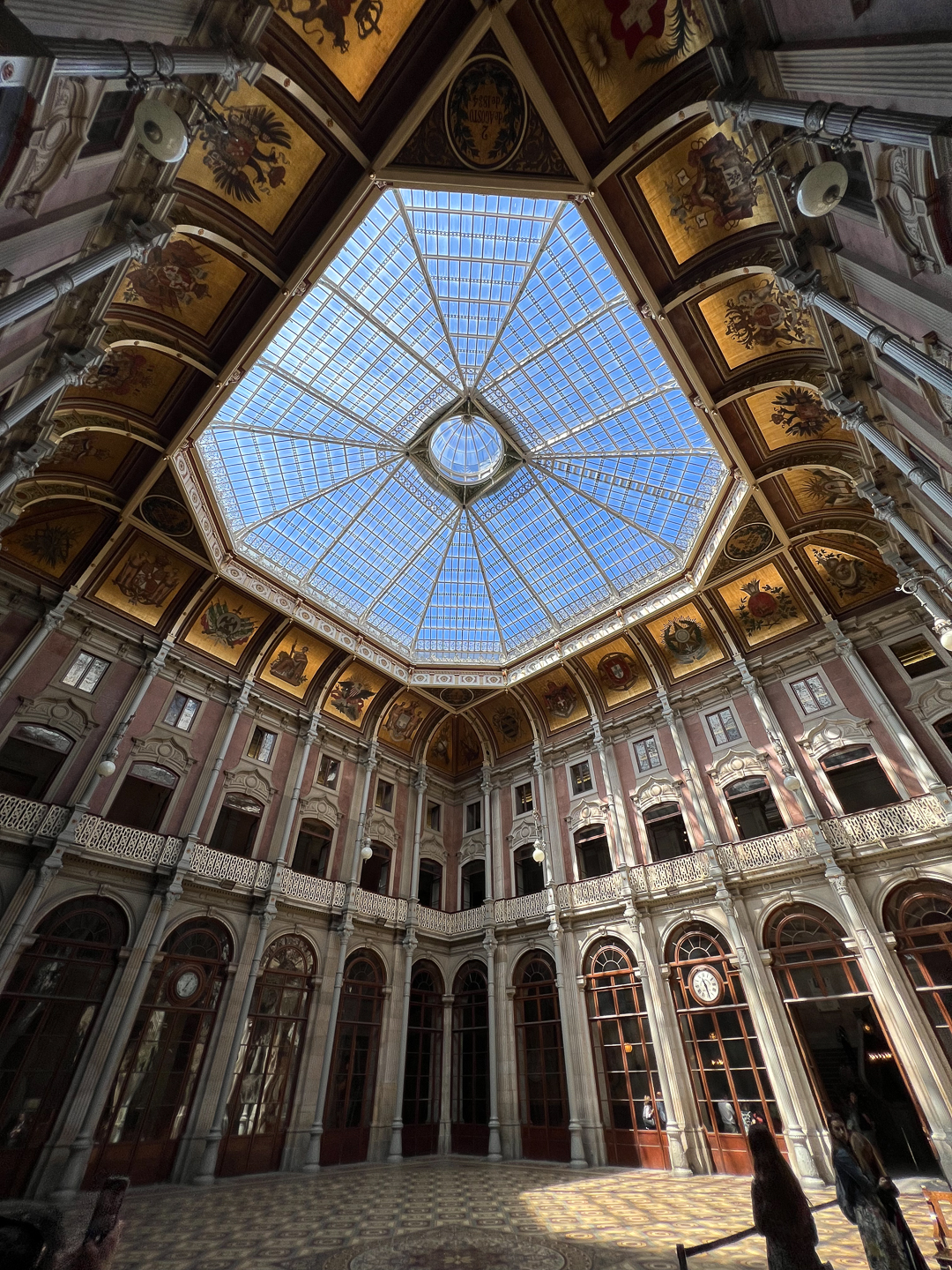 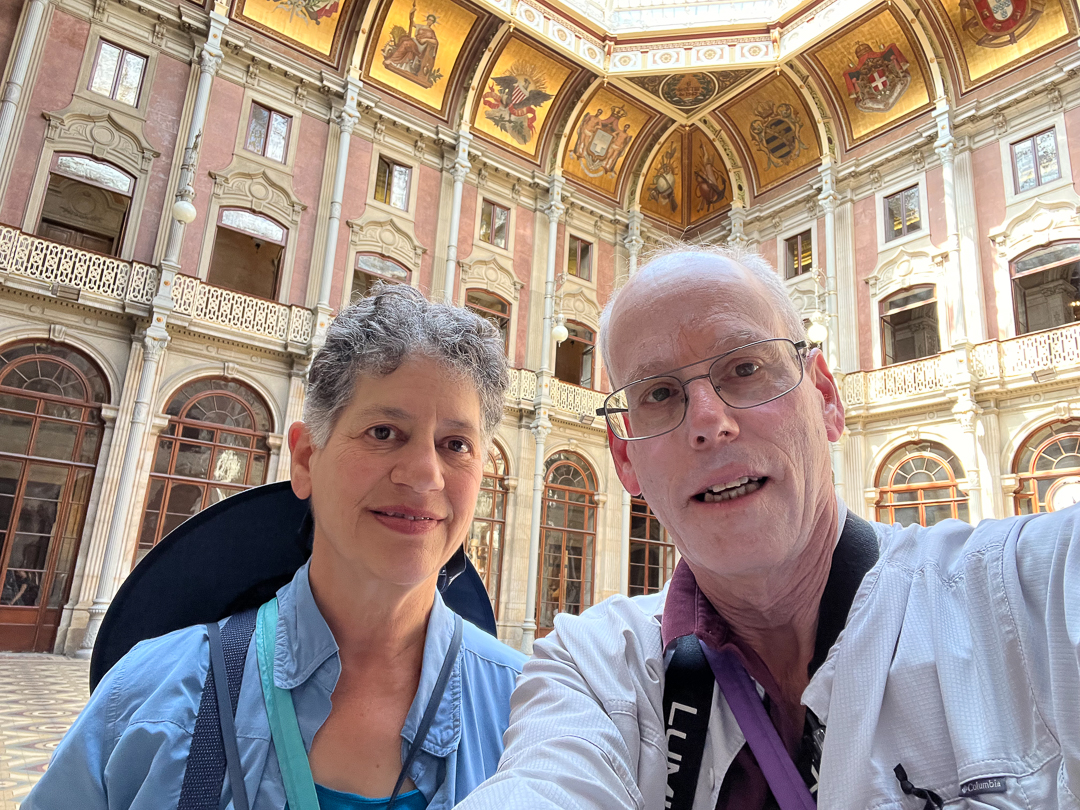 The tour continued through the palace, ending at the Arab Hall which is still used for formal visits and official city events. 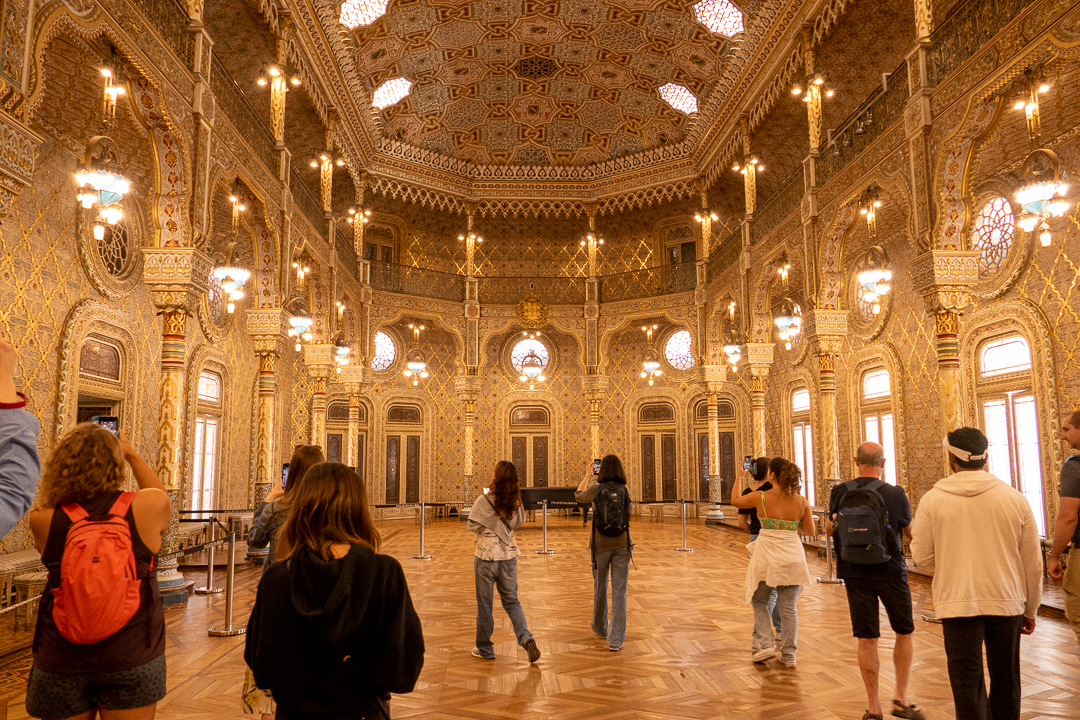 After the tour, there was yet another interesting-looking church on our route, but we avoided going in. 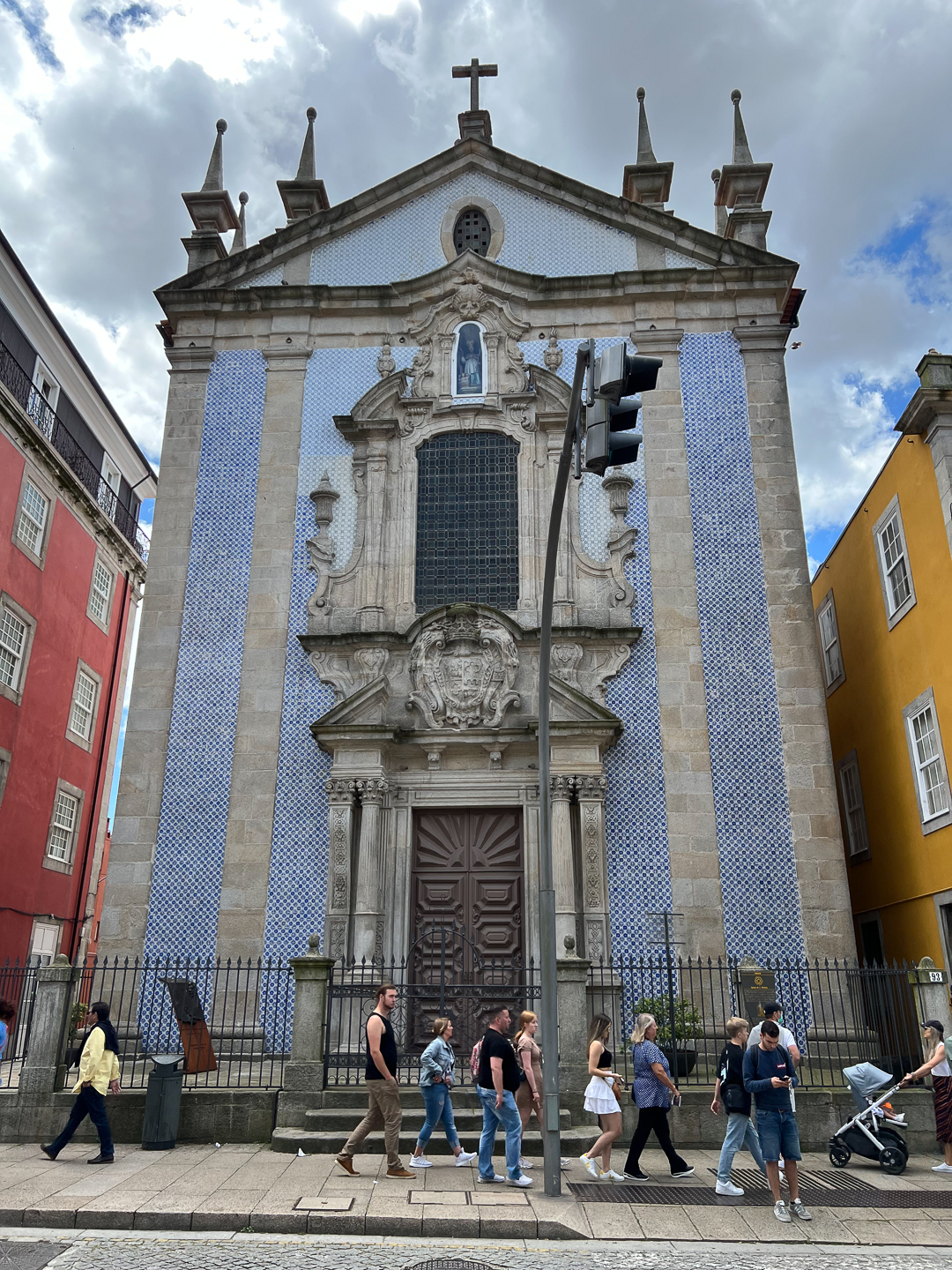 We wanted to have lunch on the Ribeira, but didn’t like the restaurants we saw at river level; instead, we went to A Grade in an alley away from the river itself. We had the house codfish and liked it a lot. 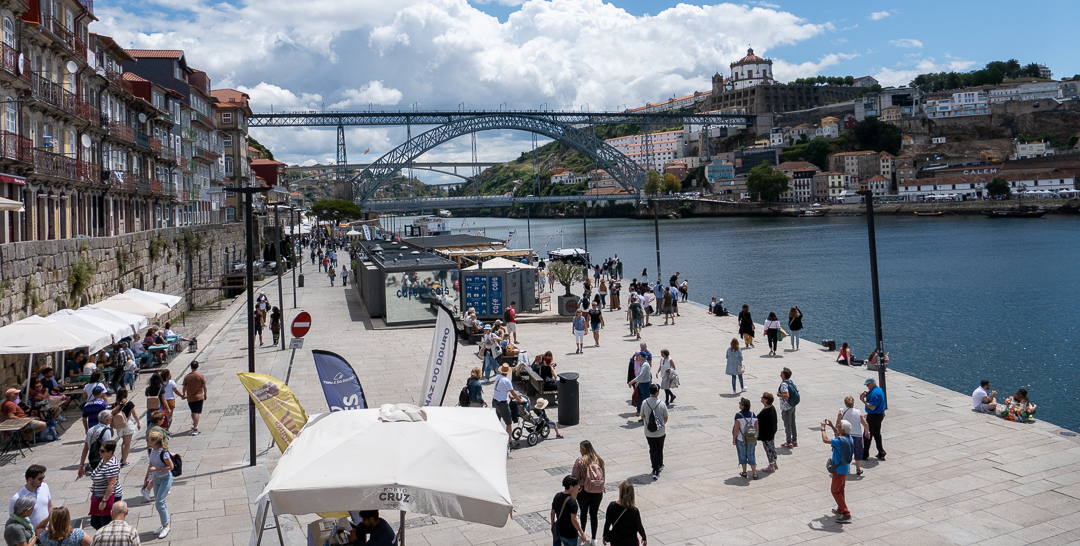 We wandered around the Ribeira and discovered a branch of the City Museum of Porto that was devoted to the Douro; it had some interesting exhibits (including a 1960s documentary about the last “rabelos” on the Douro, bringing port to Porto by rowing it there). An artist had decanted soil from various places along the Douro into wine bottles and mounted them on racks. 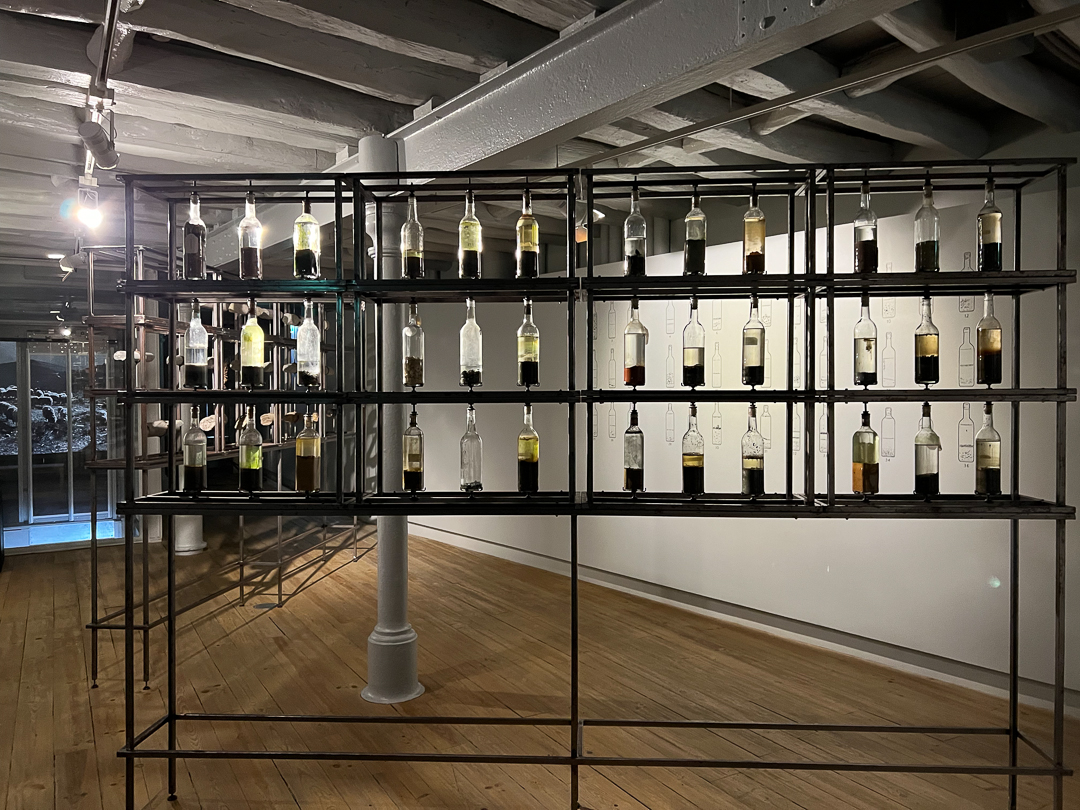 It also had a wine bar with Port tastings and comparisons; we indulged. 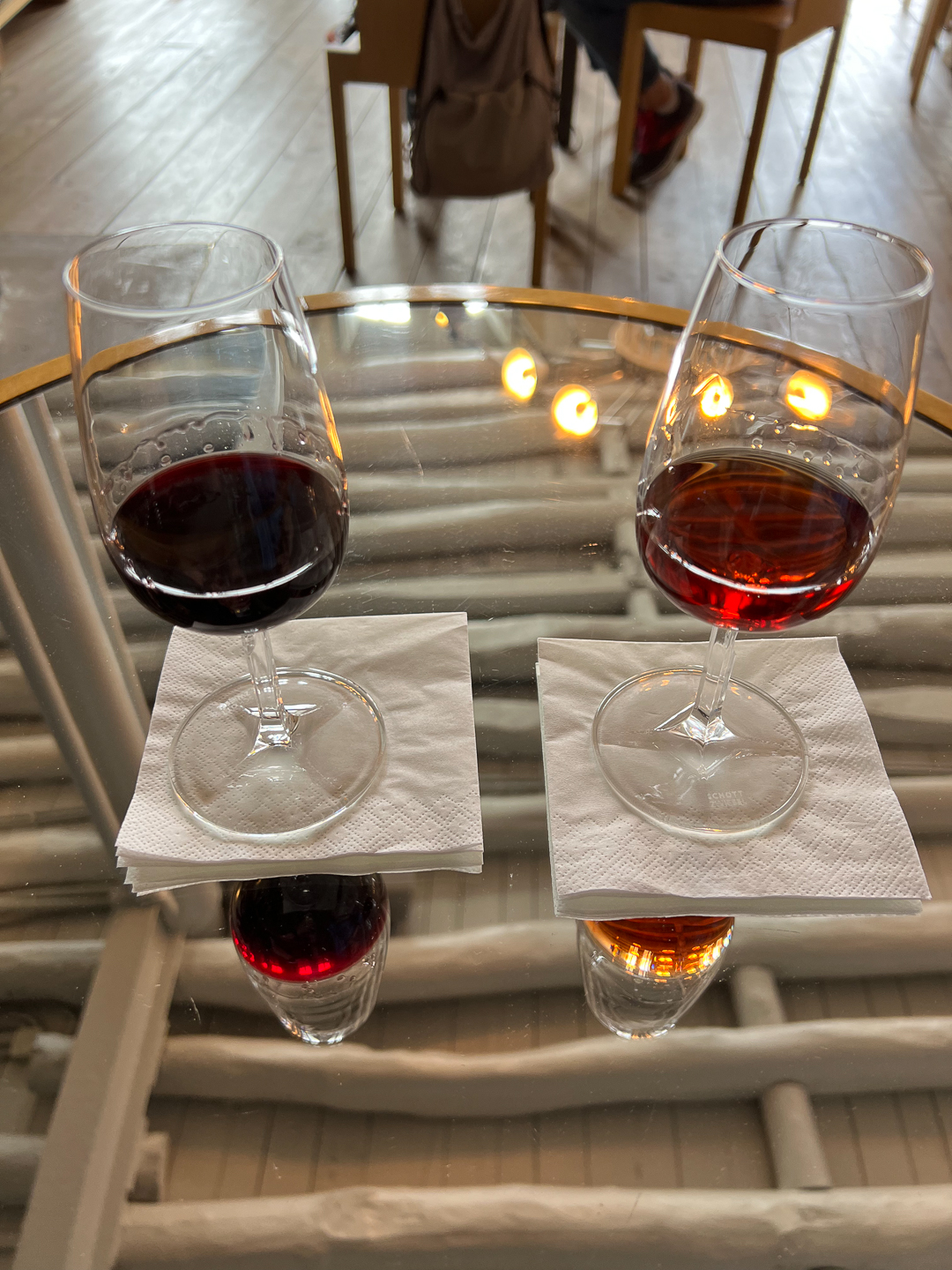 We paid our respects to Prince Henry the Navigator before going back to our hotel to regroup. 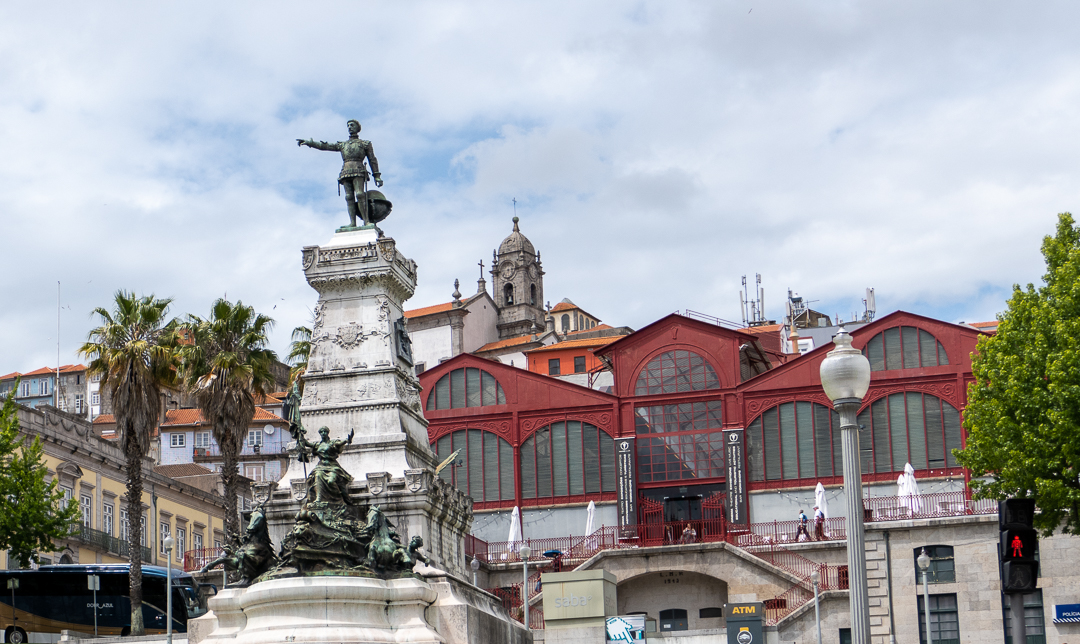 We headed out again for a chocolate and Port wine tasting at Chocolataria Equador; we decided against buying either, at least for the time being.

Our hotel offered a free “welcome drink” to its guests; the only catch was the timing – it was only available from 11am to 6pm, and we didn’t expect to be at the hotel then. But we were there this afternoon and tried the Madeira – not bad!

We walked to the Santa Caterina shopping district and had a simple dinner at Mengos. On the way back to the hotel, we enjoyed a nice view of Clergiós Tower passed by the Igreja Paroquial de Santo Ildefonso (we didn’t even check to see if the church was open!). 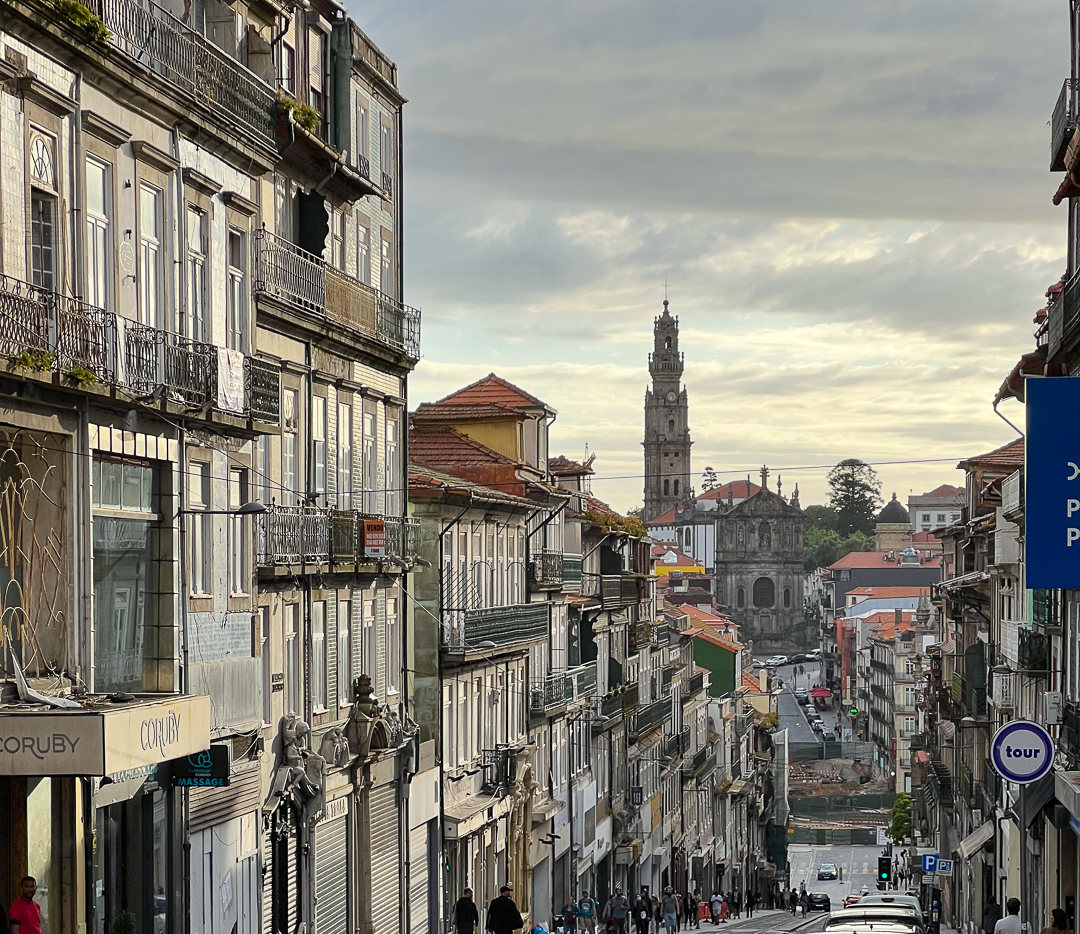 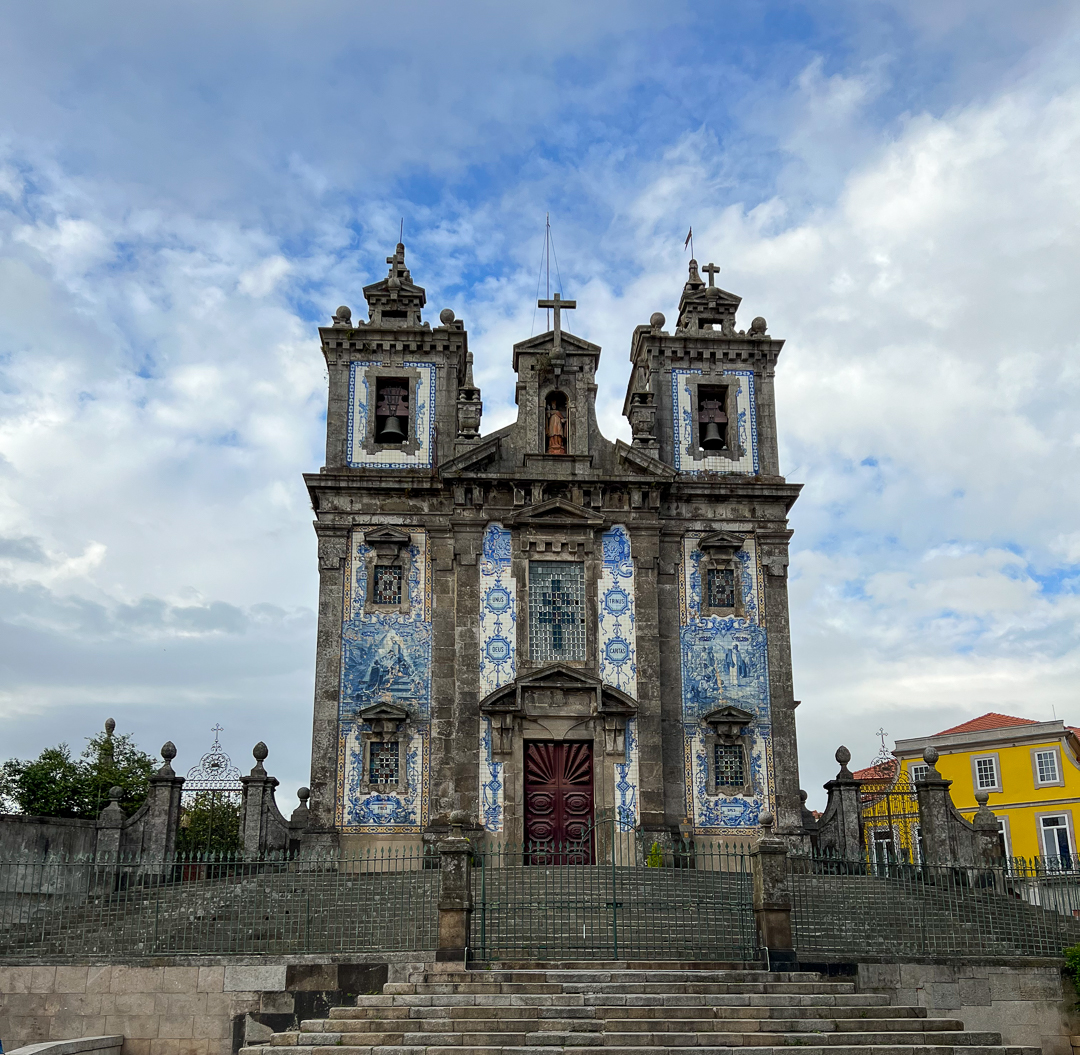