We pushed off from the dock (well, actually we pushed away from the ships between us and the dock) a little after 7 this morning and soon found ourselves on a quiet stretch of the Douro. We weren’t alone, though – we saw a few boaters out for a morning row. 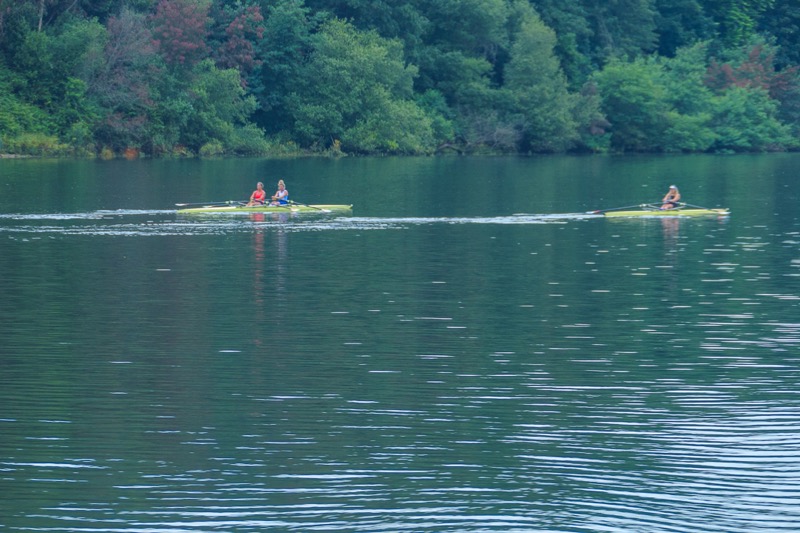 We had one lock to traverse before reaching our first destination, Entre-os-Rios. We stopped before approaching the lock – there was a worker keeping the hillside vegetation under control.

I went up to the Sun Deck to watch the traversal; they’d lowered the canopy over the lounge chairs so that we could get through the lock, so I got to see the solar cells that Ama is using to partially power the ship. 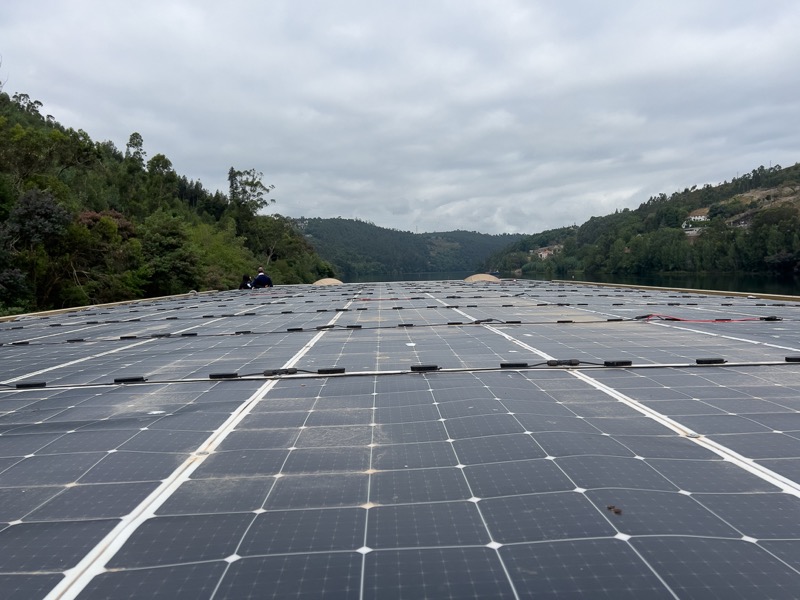 And then we were at the lock. There were sailors on either side of the ship making sure we didn’t bump the sides. 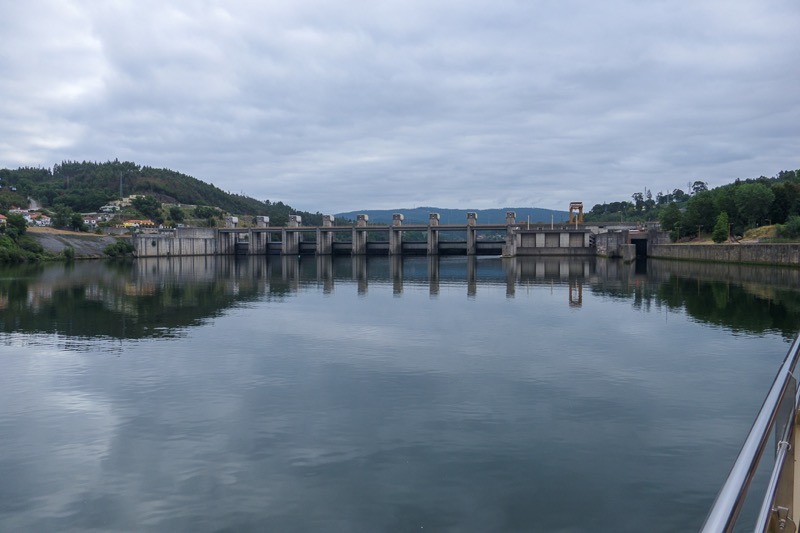 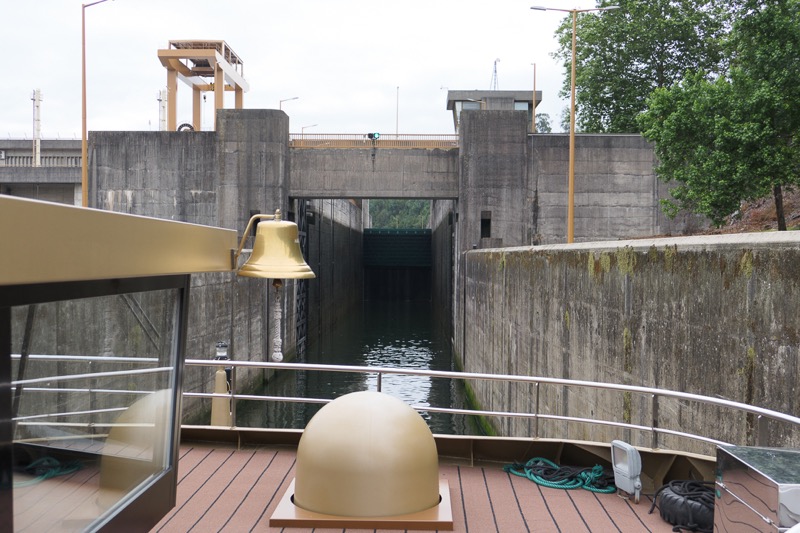 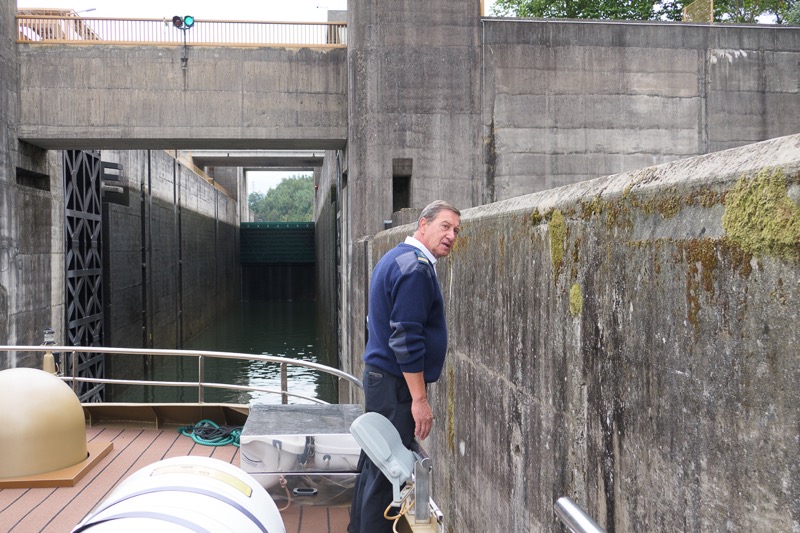 The captain came onto the deck to make the final adjustments. 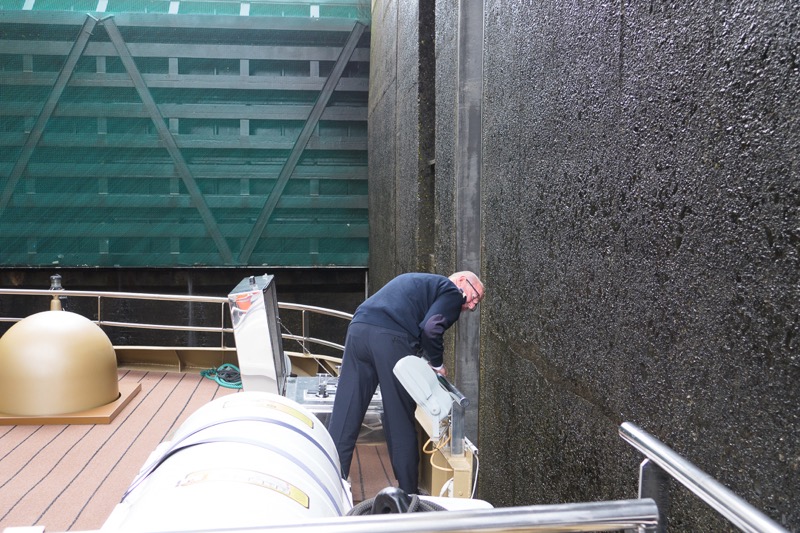 And we were through to Entre-os-Rios, where we disembarked and got onto buses to take us to Quinta da Aveleda for a scenic walk, lunch, and wine.

The route took us through Penafiel. Penafiel has some interesting artwork in their roundabouts – this one has 70 slabs of granite commemorating both the importance of granite to the economy and the 70 parishes in the province. 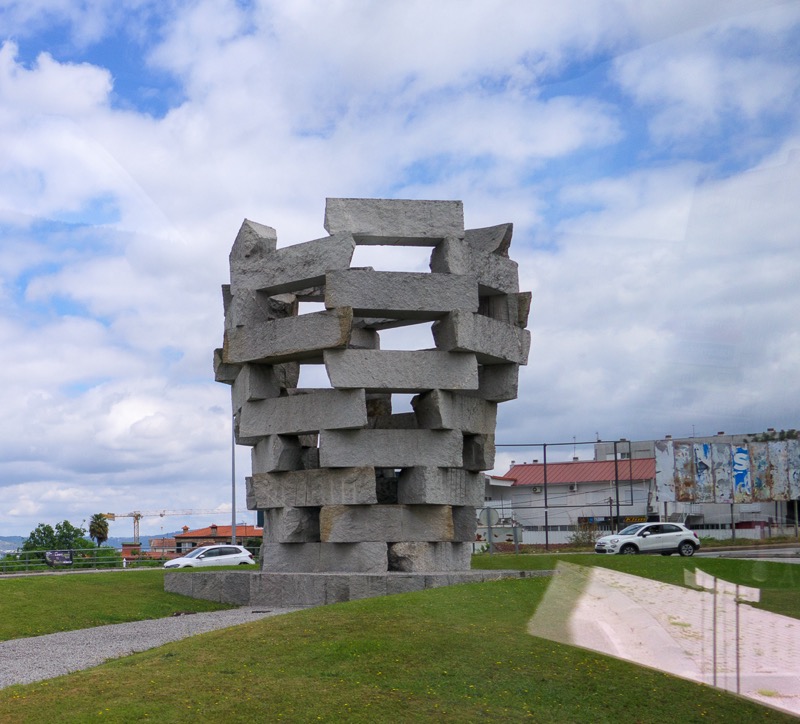 And cyclists were everywhere – in fact, we had to slow down several times because bicyclists were in the lane, going very slowly up hills. This guy wasn’t a problem, though. 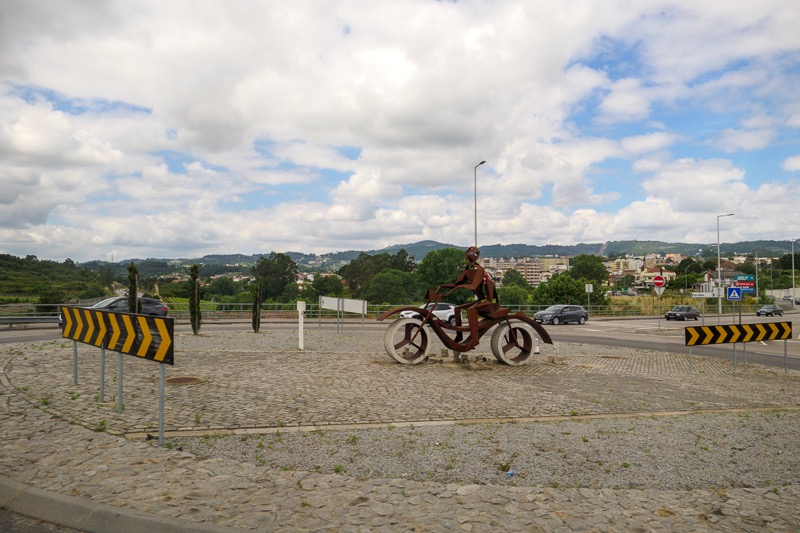 And then we were at the Quinta. 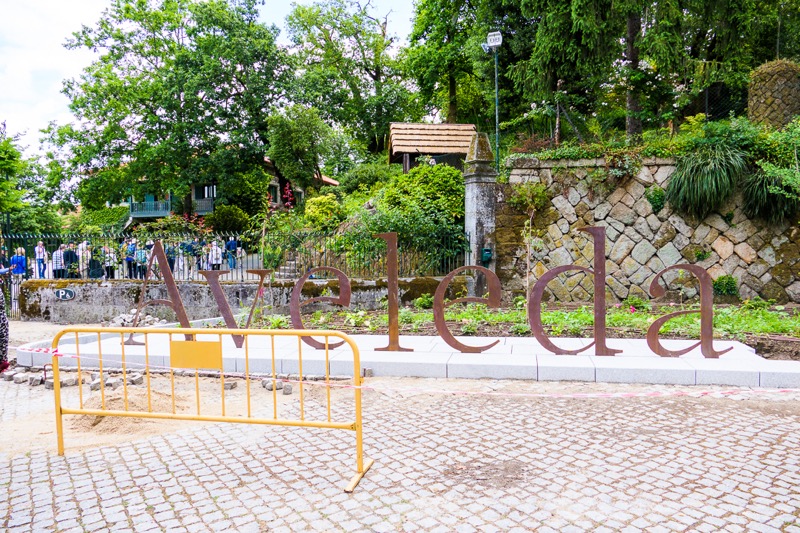 The estate has been under one ownership since the 17th Century, and it’s been a winery and vineyard for a couple of centuries. Much of it is taken up by flowers and wildlife.

There were dozens of varieties of hydrangea. 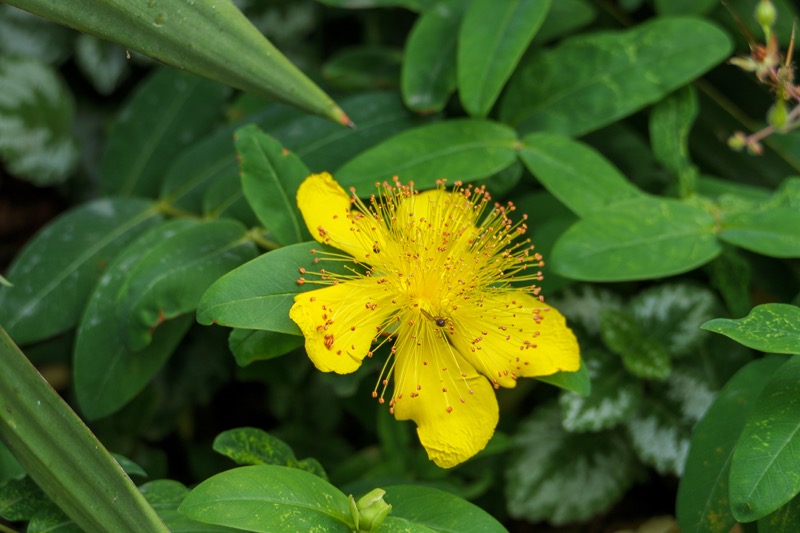 This bush is called “yesterday, today, and tomorrow” because the flowers change color so quickly. 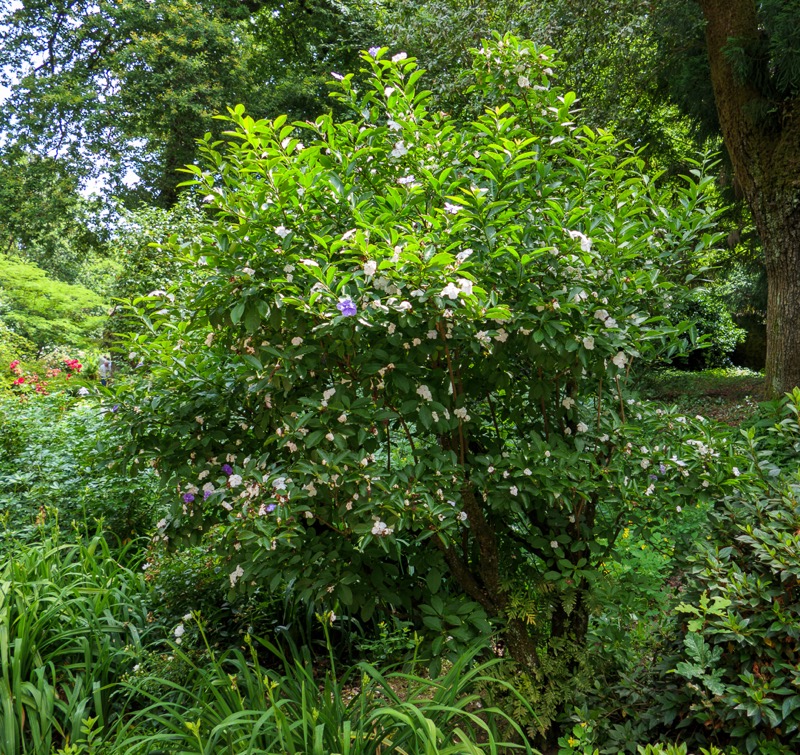 There were many fire lilies. 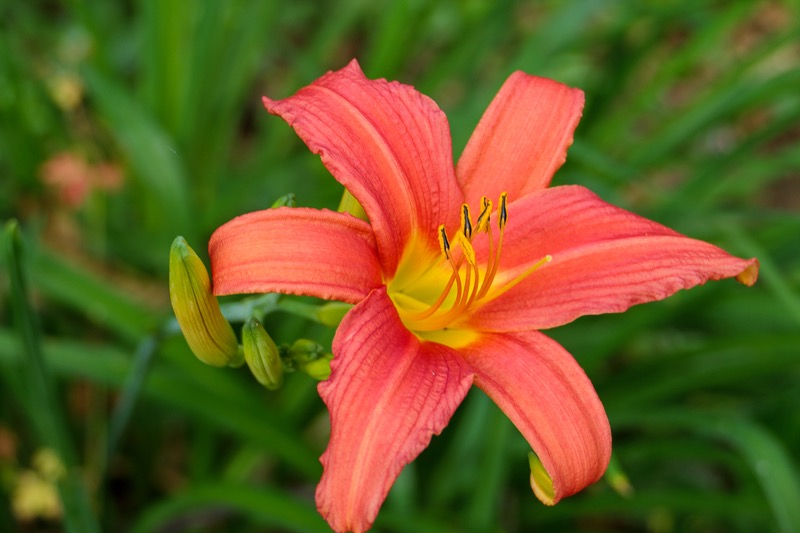 This hydrangea is also called “Tea of Heaven”. 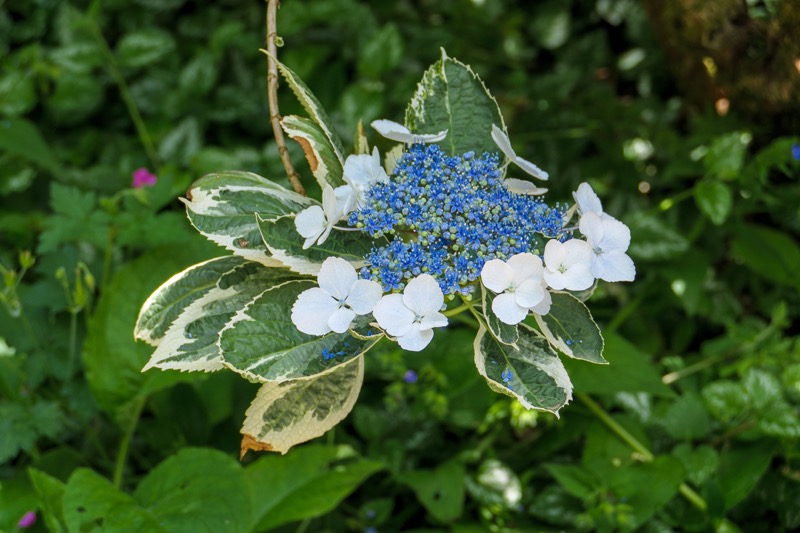 They have a small flock of goats. 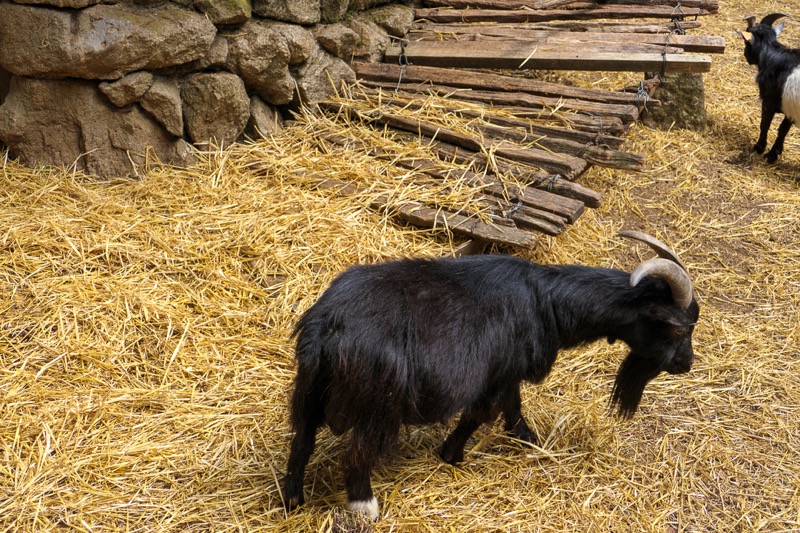 The family preserved this window from a 16th Century building in Porto; it has some relationship to Henry the Navigator, but I didn’t take careful enough notes to remember what it was. 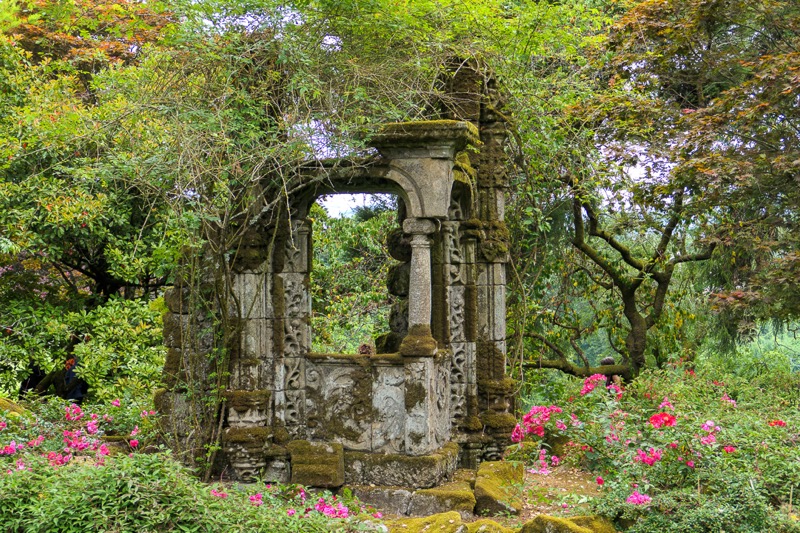 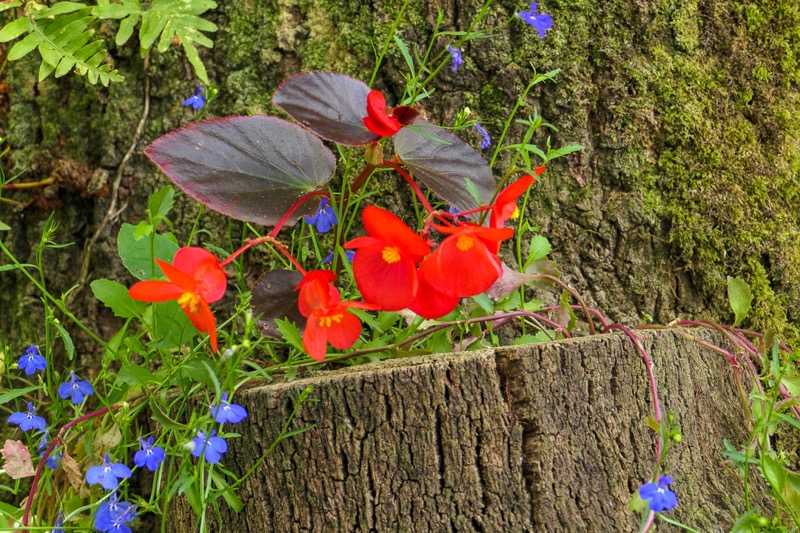 The family who owns the estate is a Big Deal; the Royal Family visited from time to time, including having dinner outside in 1901. 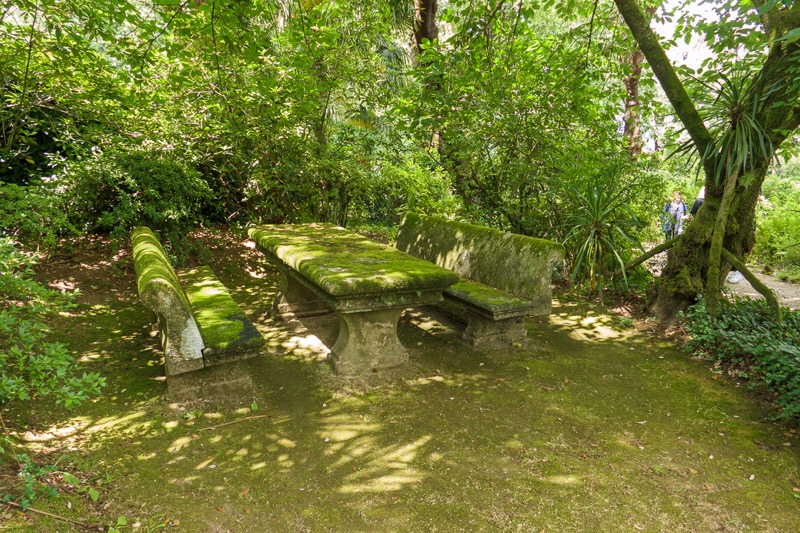 One more tiger lily for the road! 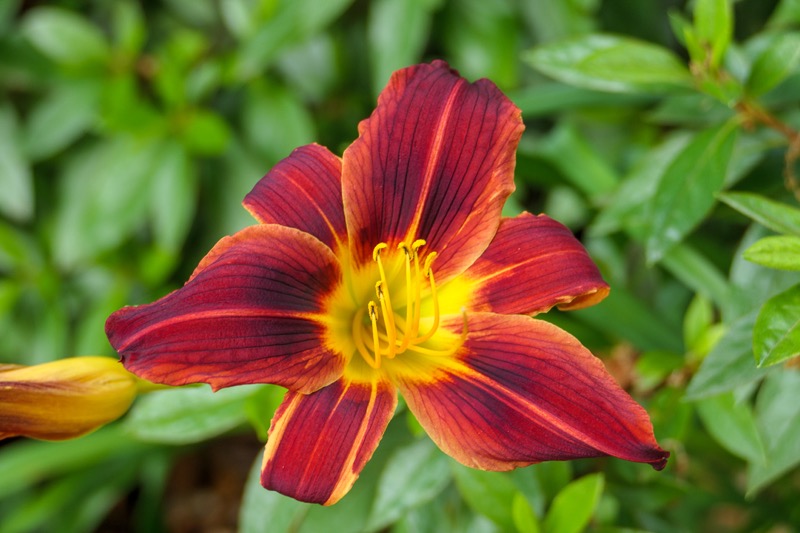 We finished the tour with a visit to the Brandy Aging Room. The smell was heavenly, but we didn’t get to taste any brandy. 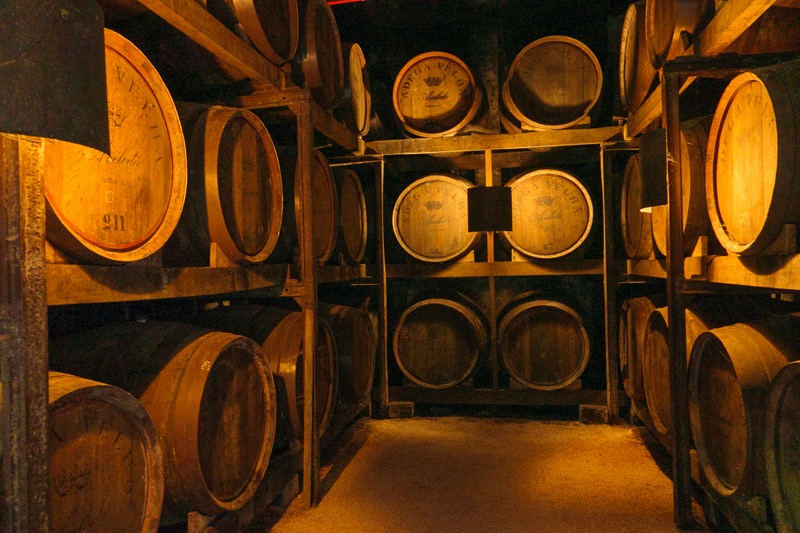 Lunch was pleasant but not picturesque; we had to leave Aveleda to return to the ship. The gift shop wasn’t even open! 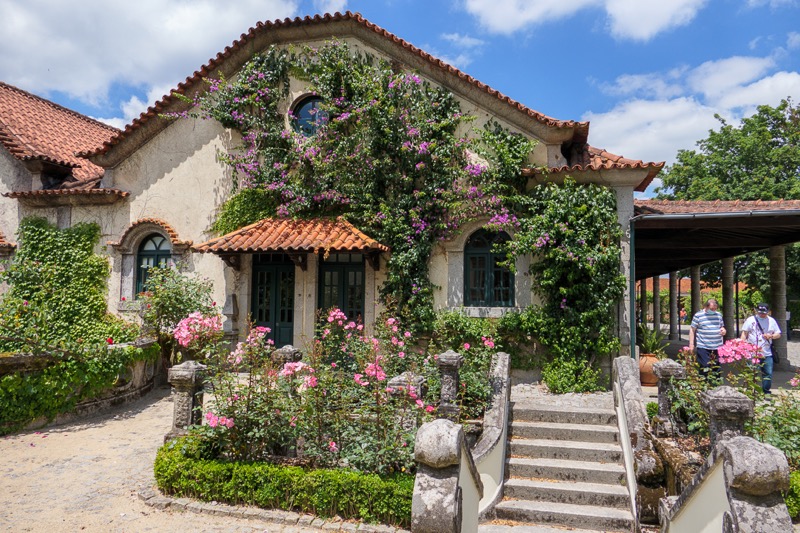 The drive back to the ship was fast – no cyclists.

I don’t know what the connection is between this statue of Christ and the bullhorns mounted on it; I don’t even know how to ask. 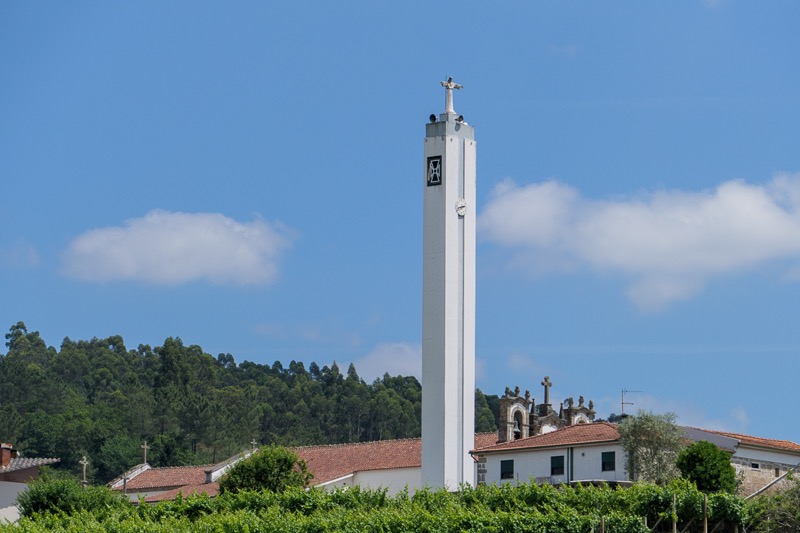 We returned to the ship for a beautiful afternoon of cruising down the Douro. 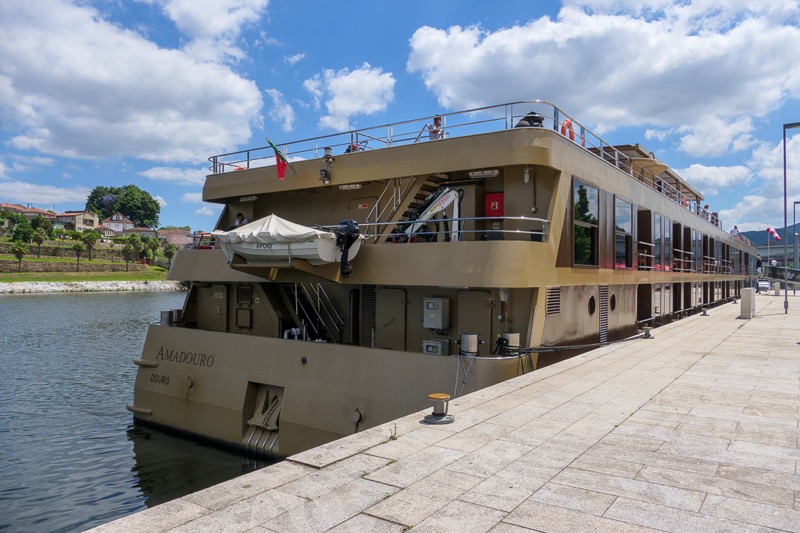 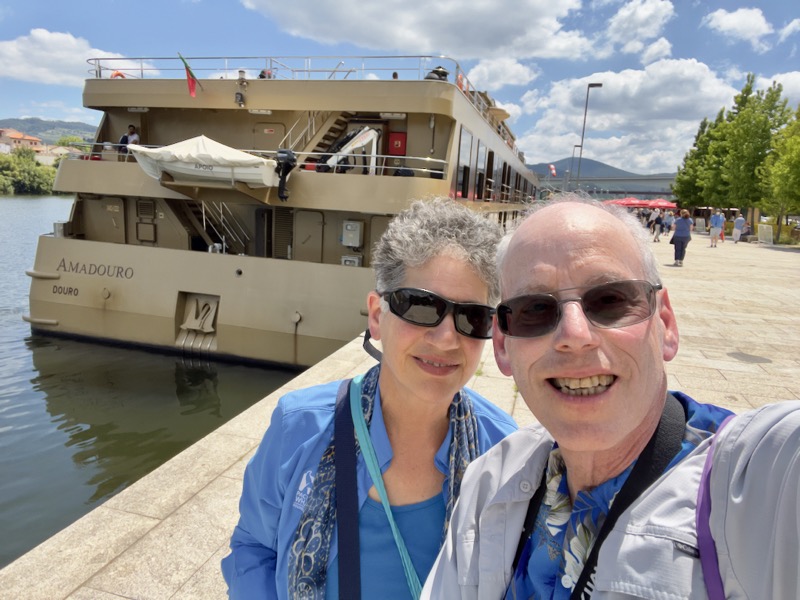 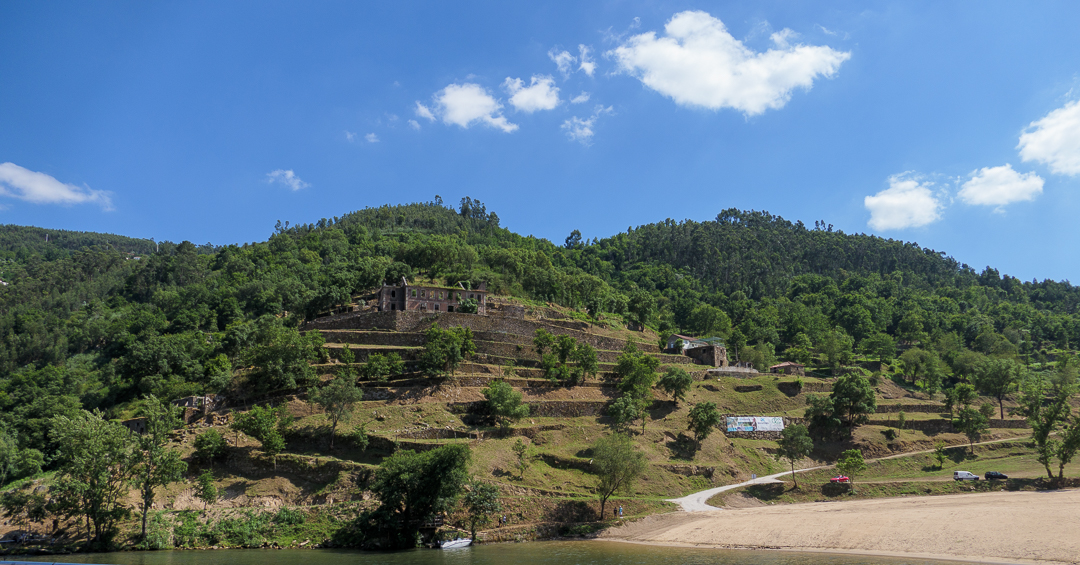 We traversed the Carrapatelo lock, the biggest lock on the river. We barely made it! 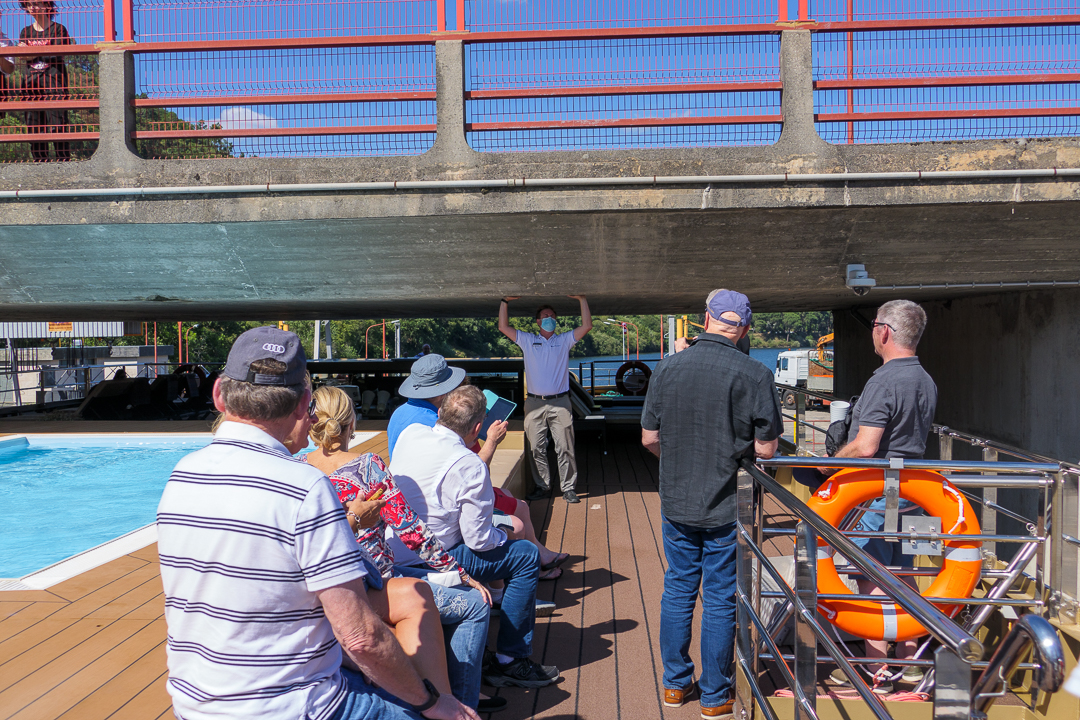 The Douro valley is very beautiful.

Tonight, we dock at Régua and will have a Fado show after dinner. Should be fun!