When we checked into the Westin Palace, the desk clerk offered me the choice of 1,000 Marriott points or daily breakfast for two in the hotel restaurant, La Rotonda. It wasn’t a hard choice; I chose the breakfast.

This morning, I realized the wisdom of the choice; not only was the breakfast buffet amazing in its breadth of choices (little hamburgers for breakfast, sparkling wine, churros, omelettes, two kinds of smoked salmon, and much much more) and very tasty, but the room was almost worth the price of admission by itself. 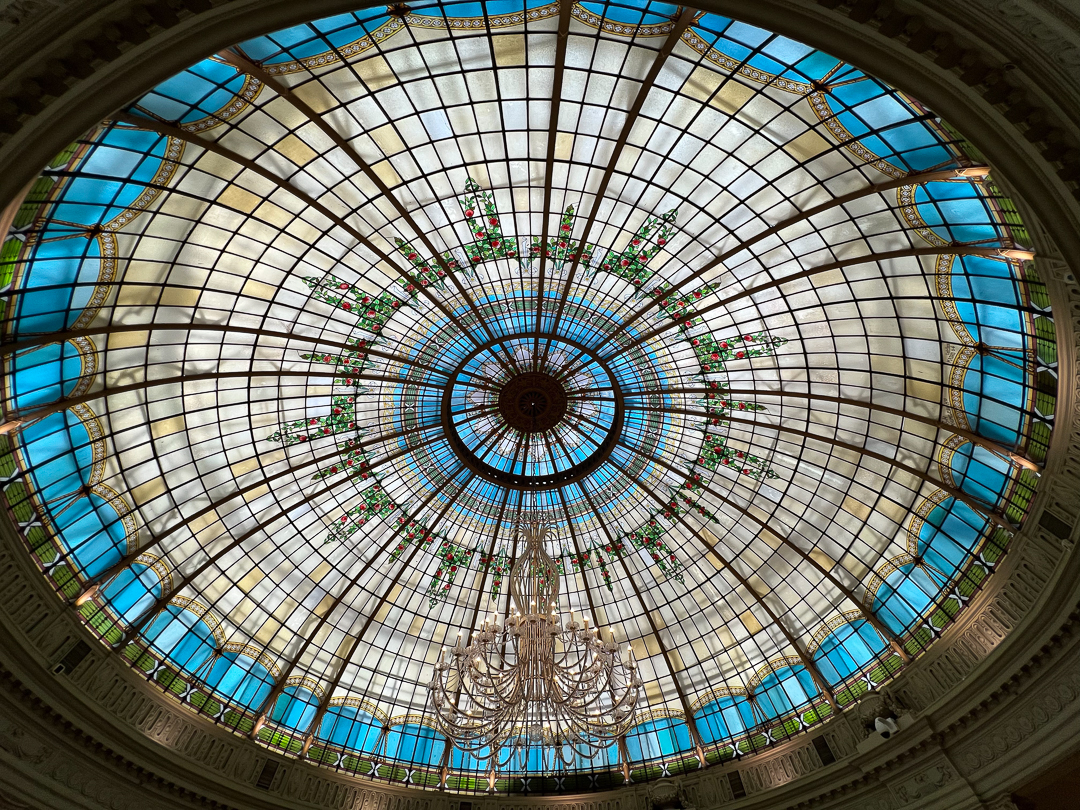 The big plan for today was a guided tour to Segovia. Our guide, Pepe, also did the driving; it took a little over an hour to get to Segovia, much of it spent in Madrid traffic.

On the way there, I noticed this huge cross near the highway – it is the largest cross in the Western world (500 feet high) and was built between 1940 and 1959 at the order of Francisco Franco. He was buried there but was exhumed in 2019; he is, however, still dead. 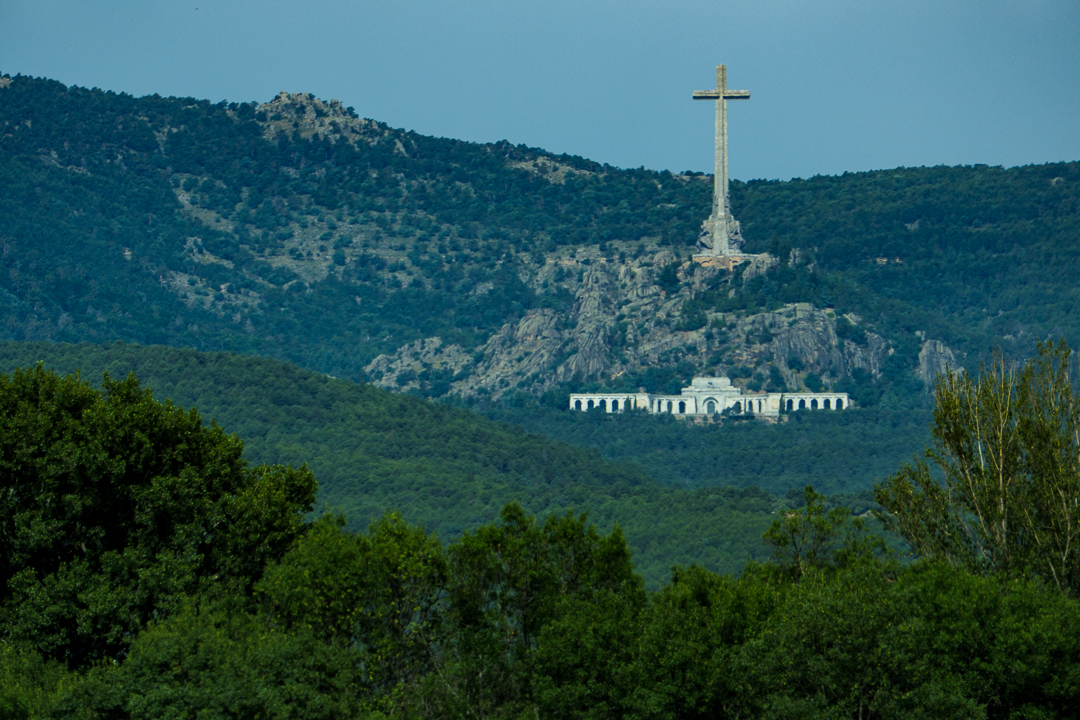 We parked on the outskirts of Segovia, near the old Roman aqueduct, which was in use until late in the 19th Century. 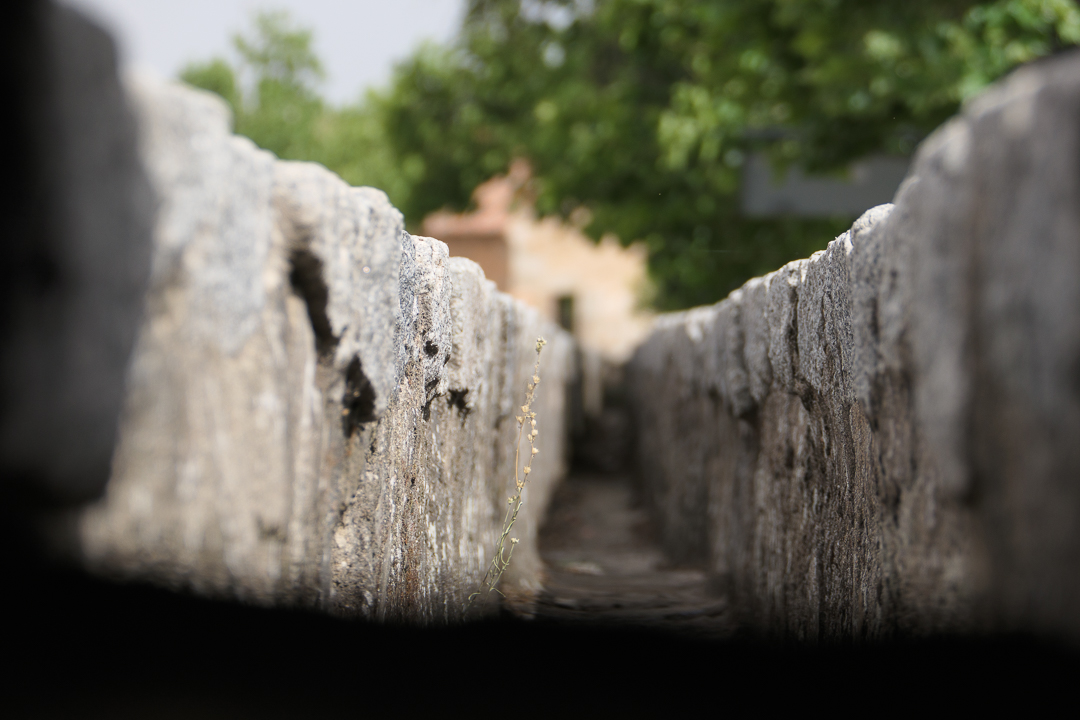 It’s more impressive as it gets closer to the city and is carried on arches to maintain the gravity-powered flow of water. 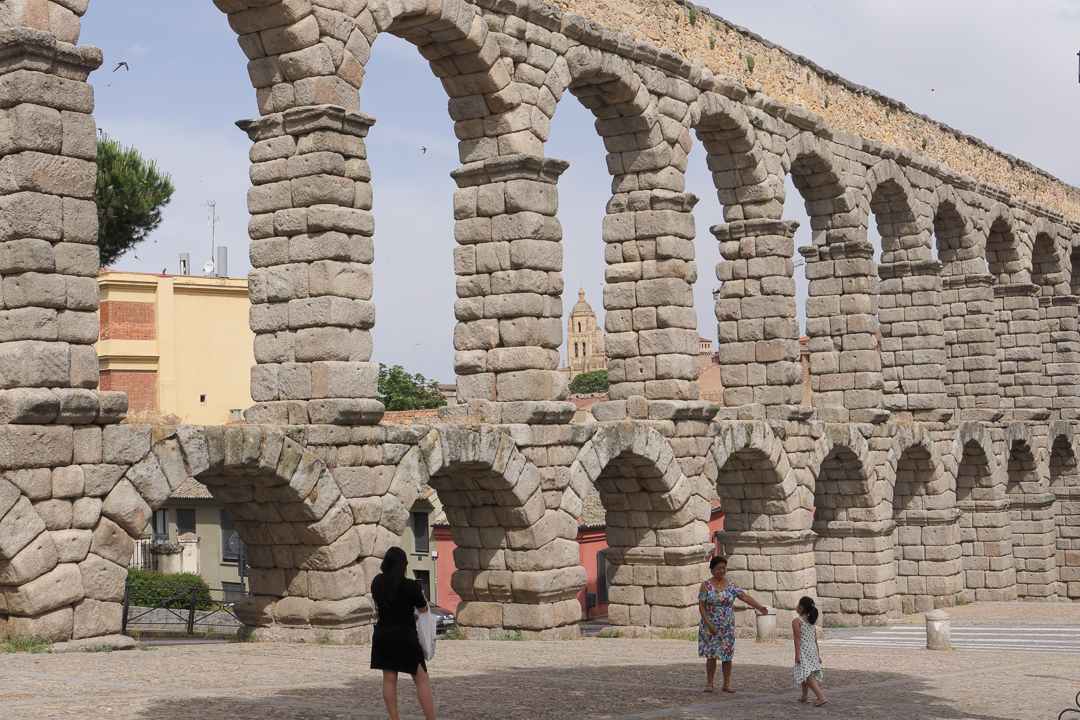 It discharged into a cistern which is now drained; Pepe showed us how the water flowed in and out and how the iron content had stained the granite over the centuries. 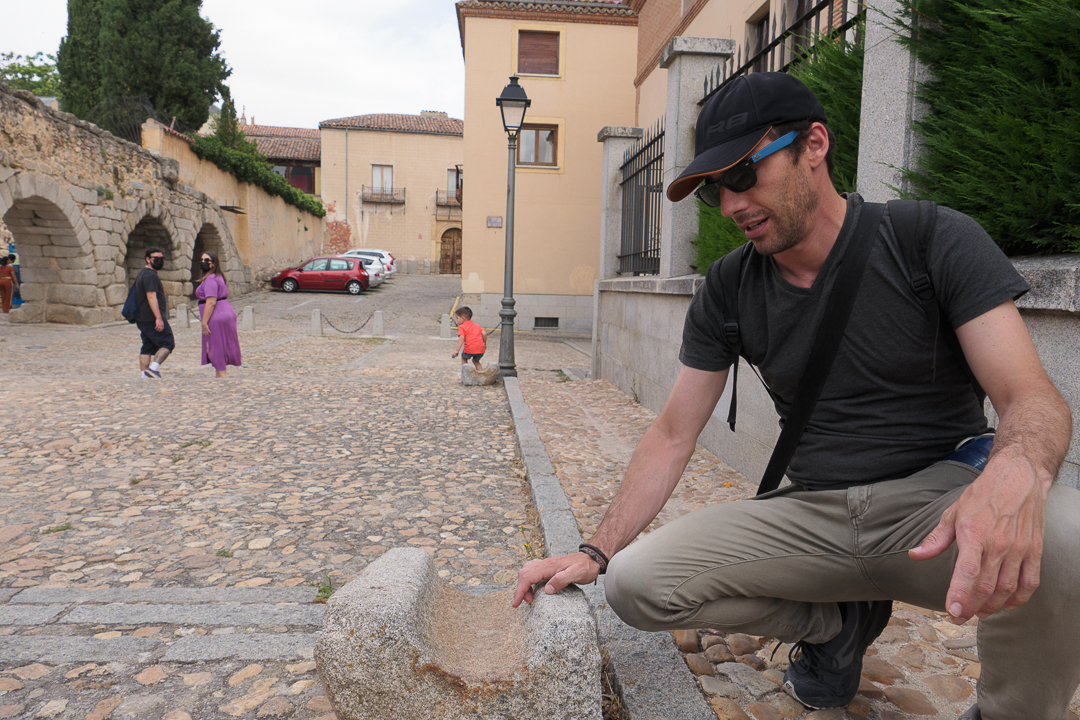 On the way into Segovia, we passed a billboard advertising the Sixth International Swift Conference – it was for the birds, not the language, and we found quite a few of them flying around. 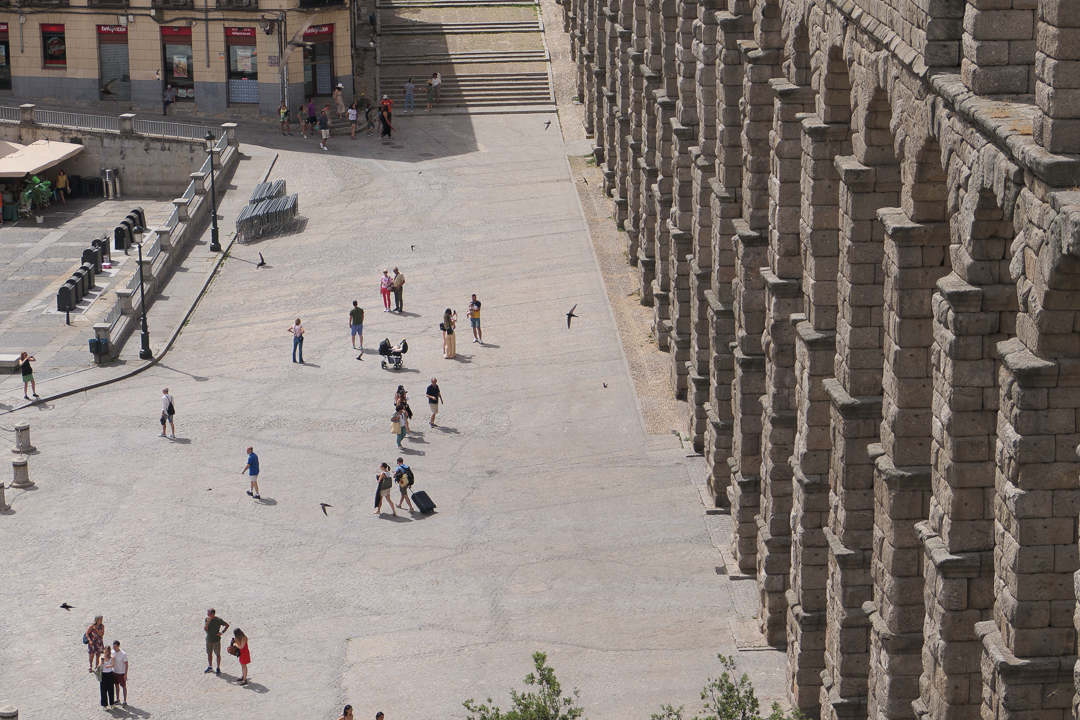 Pepe told us a lot about the Spanish Inquisition (which continued until 1834), complete with drawings illustrating the process of getting the accused to confess (waterboarding was part of the process). They built a church for the Inquisition to do its work outside the walls of the city – plausible deniability is nothing new. 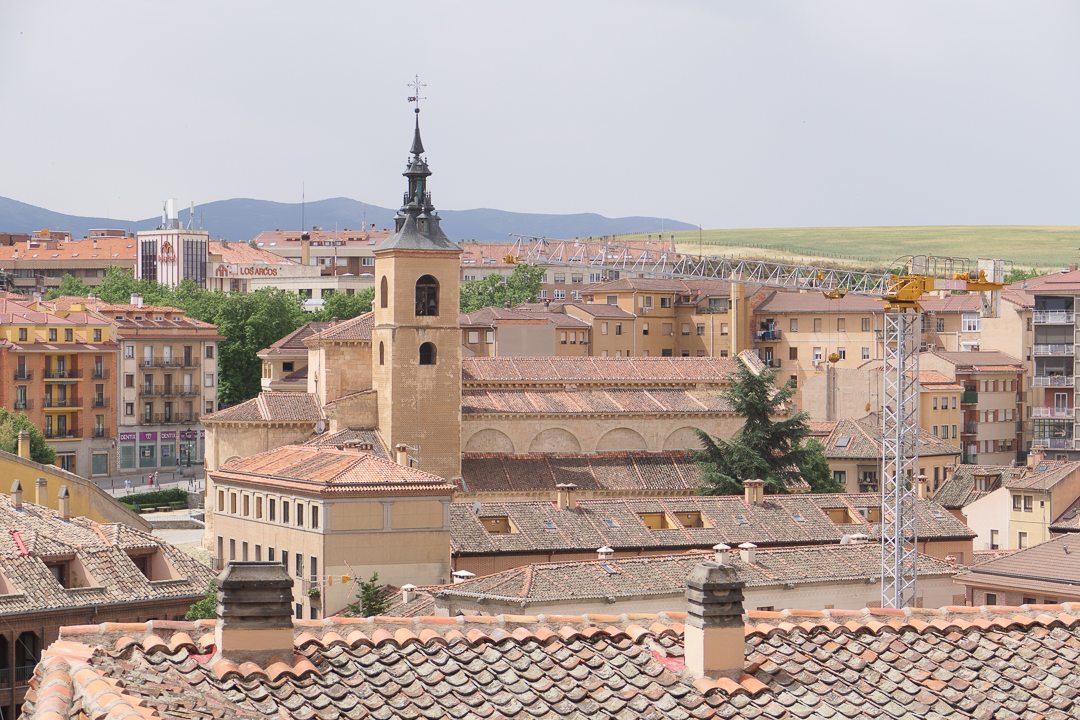 Pepe told us about some of the civil wars that had happened in Spain, including, of course, the Spanish Civil War of the 1930s. After Franco died, the city put up a monument to those who were persecuted during and after the war. 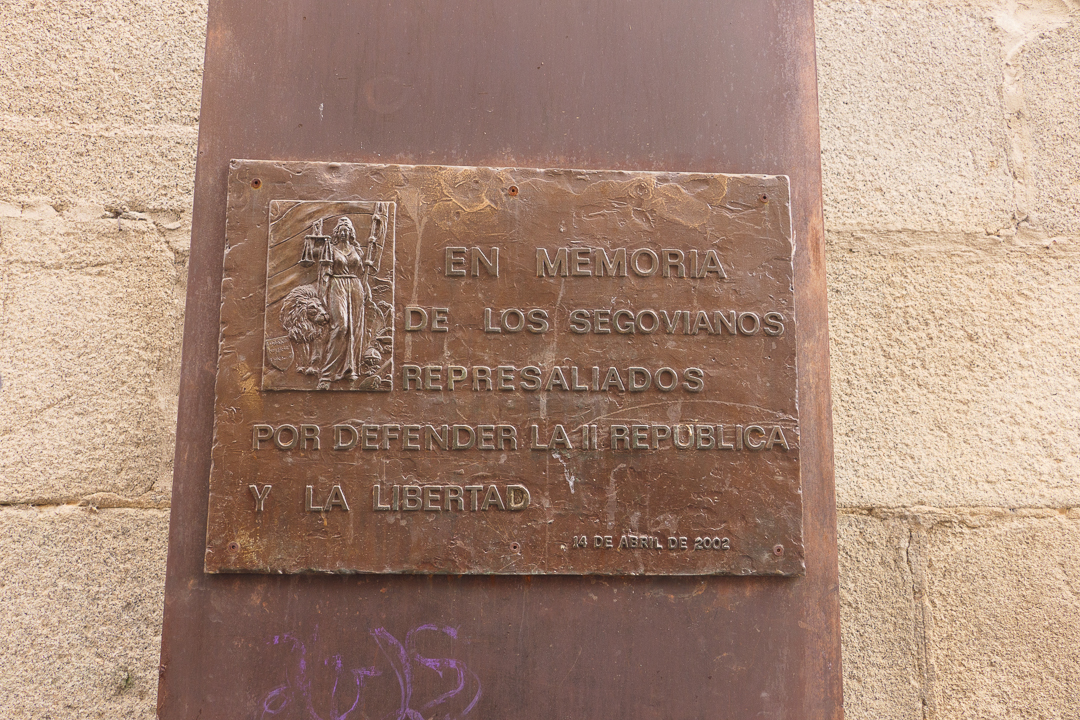 We walked through the Jewish Quarter; it was rather small and not terribly photogenic. Pepe said that Jews had lived thoroughout the area before the Inquisition, not just in the one area, which was quite close to the Cathedral – you could see the gargoyles which provide the drainage for the Cathedral from there. 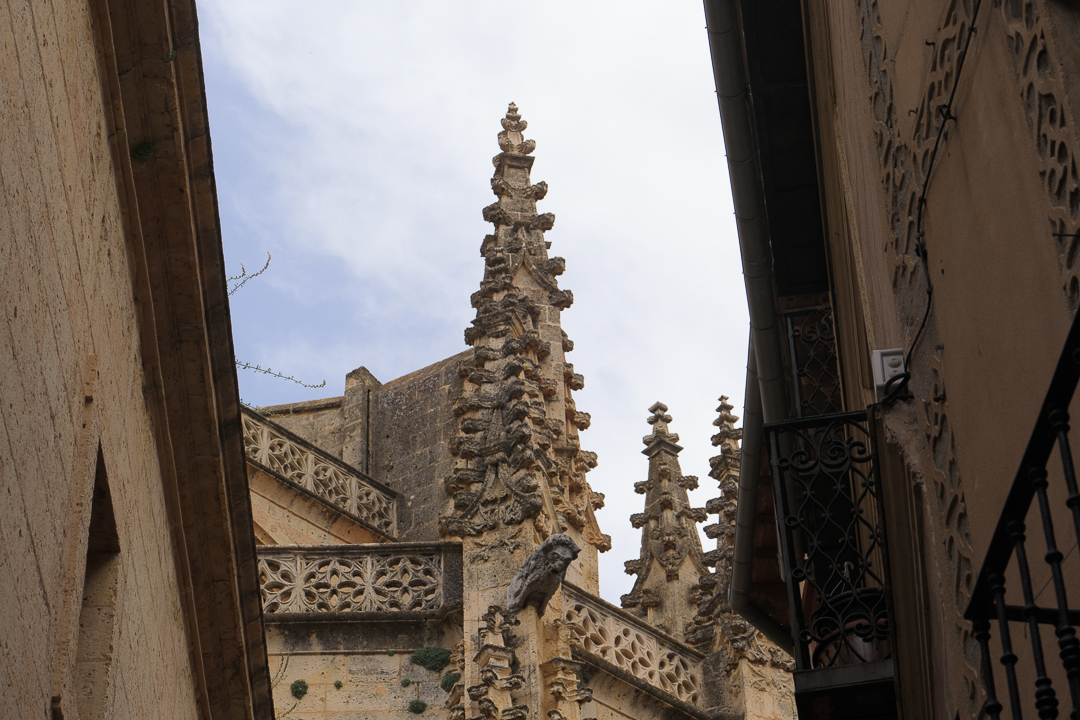 We walked to the Plaza Mayor, which was lovely. During the Inquisition, it was the site of the weekly executions of the guilty; again, Pepe showed us drawings and described the process in detail. 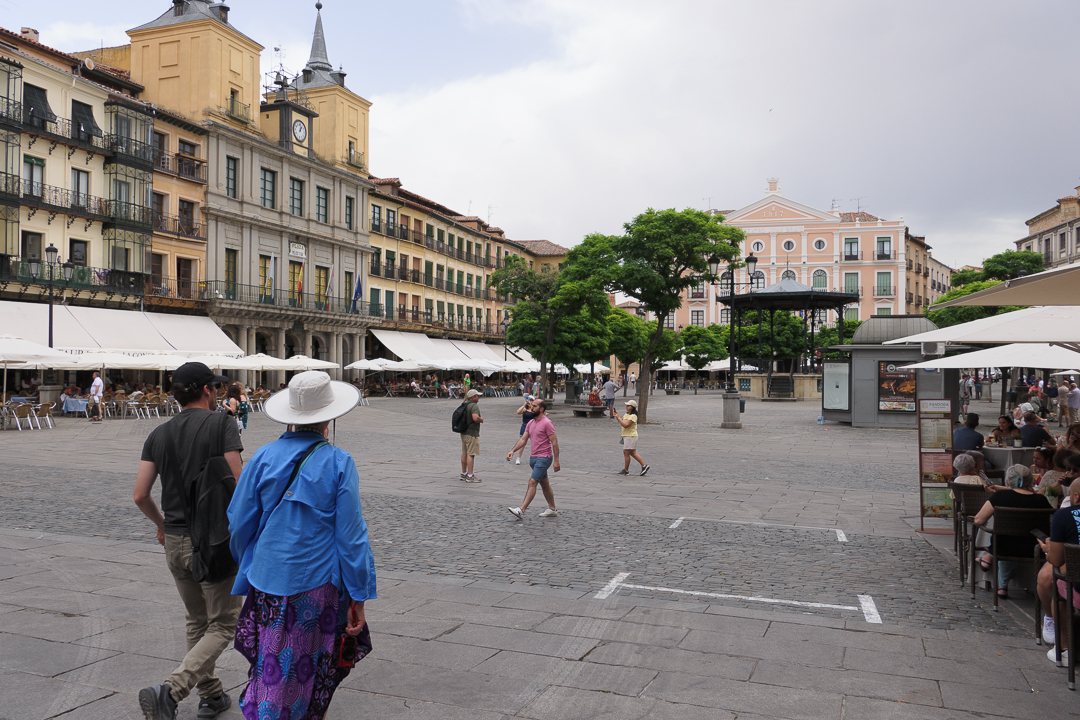 We walked by the Cathedral; it’s impressive. 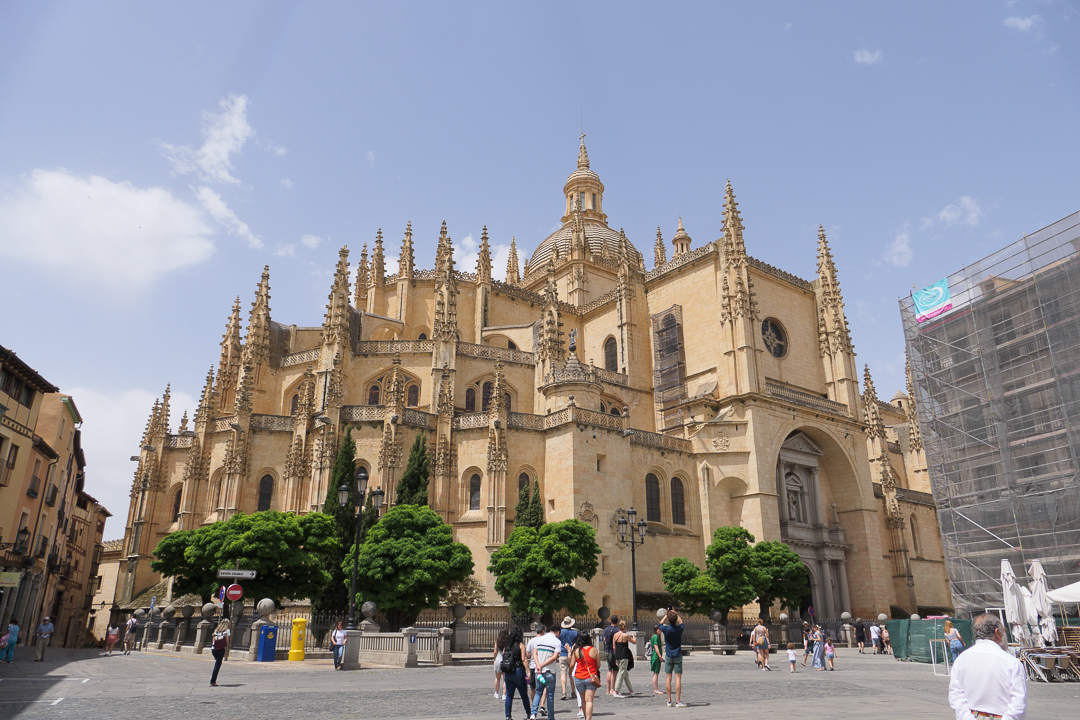 Diane noticed some interesting markers on the street – at first, I thought they might have been a Spanish twist on the Stolperstein (stumbling stones) you see in Germany, but they’ve been placed by the Network of Spanish Jewish Quarters to mark the old Jewish Quarter. 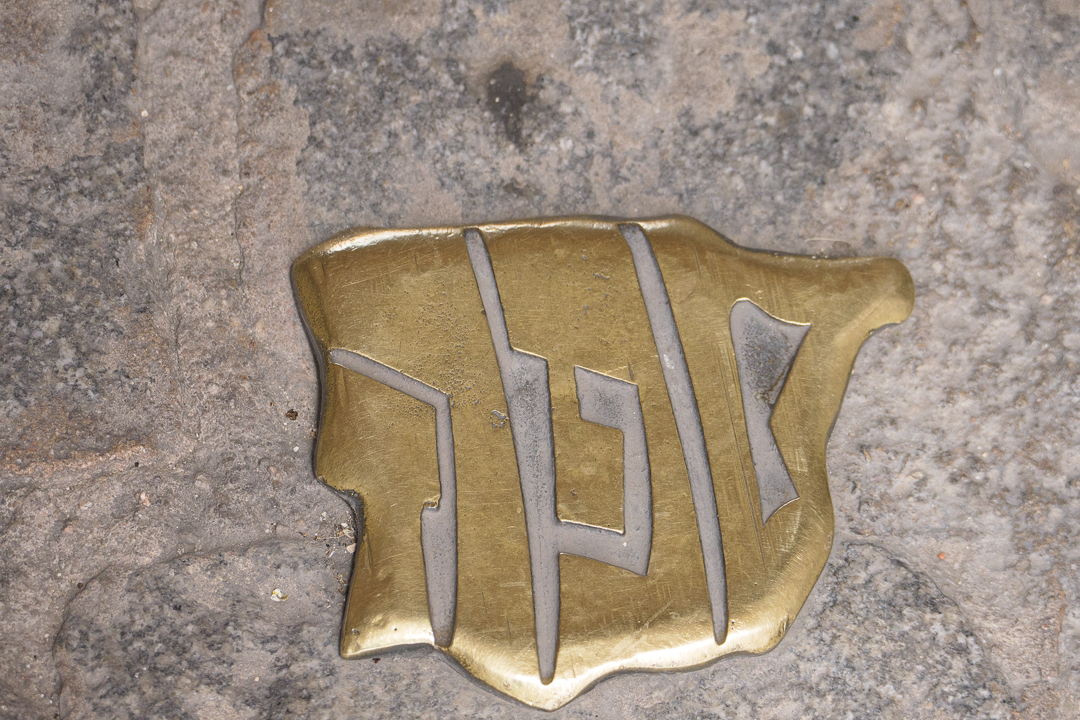 The crown jewel of the day was our visit to the Alcázar of Segovia (Segovia Castle), where Queen Isabella I (of Columbus fame) was enthroned. 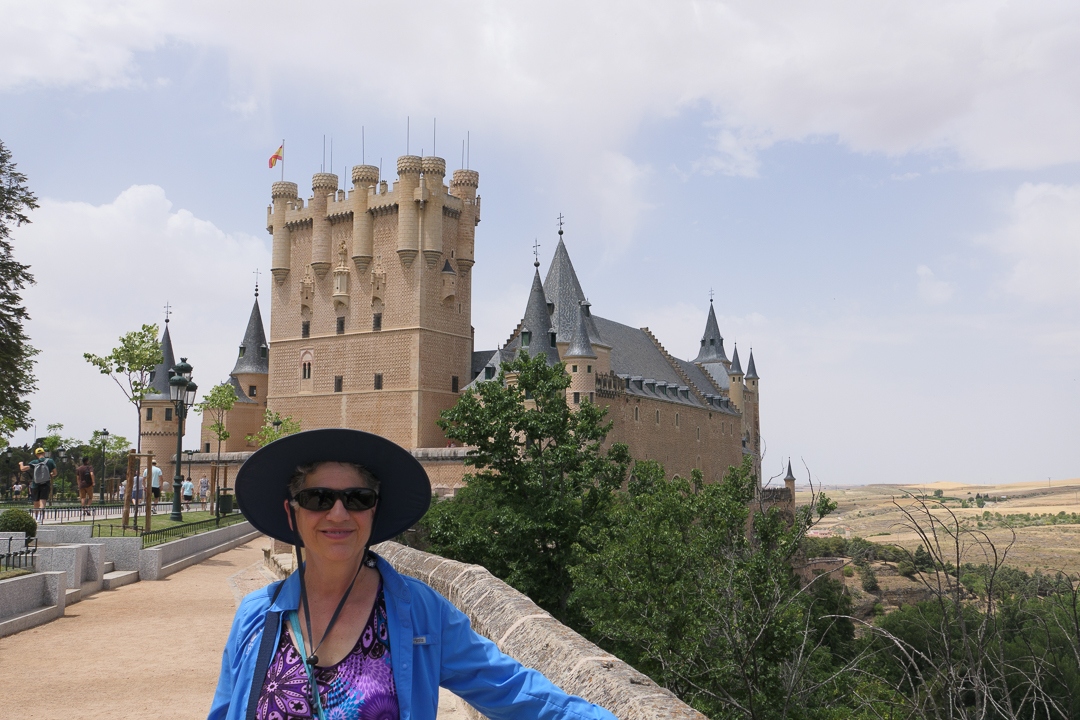 No castle was complete without a moat – Pepe said that they fed the alligators in the moat through the hole in the rock. 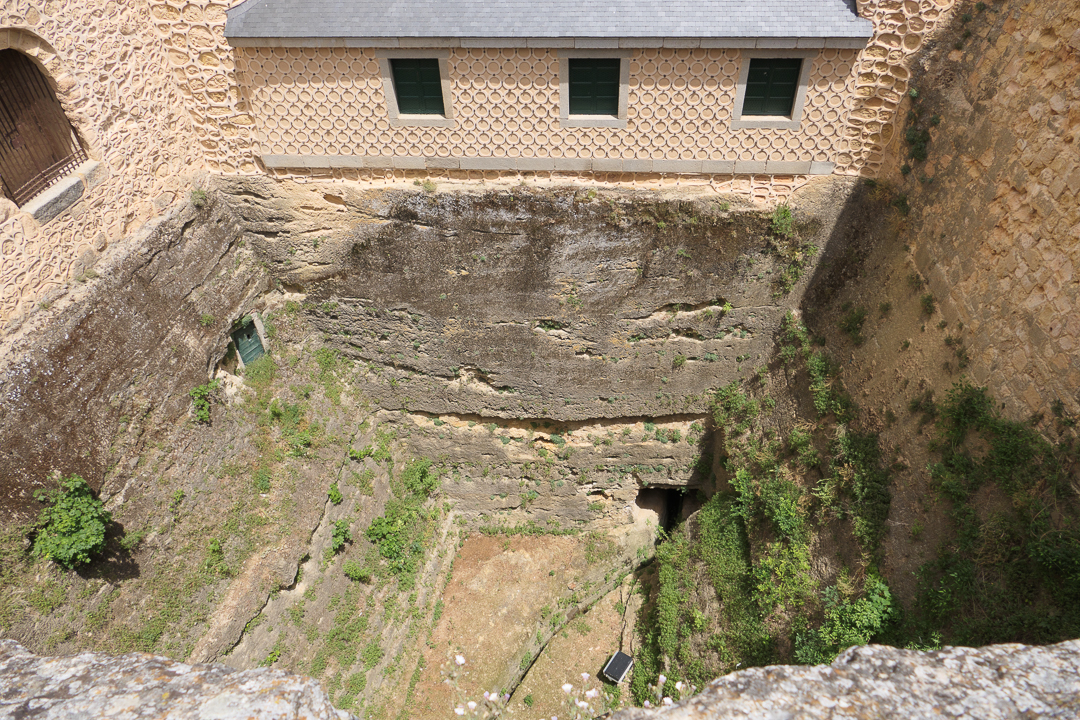 Children did a lot of the fighting in wars in the Middle Ages; they were enthusiastic and easily replaceable. 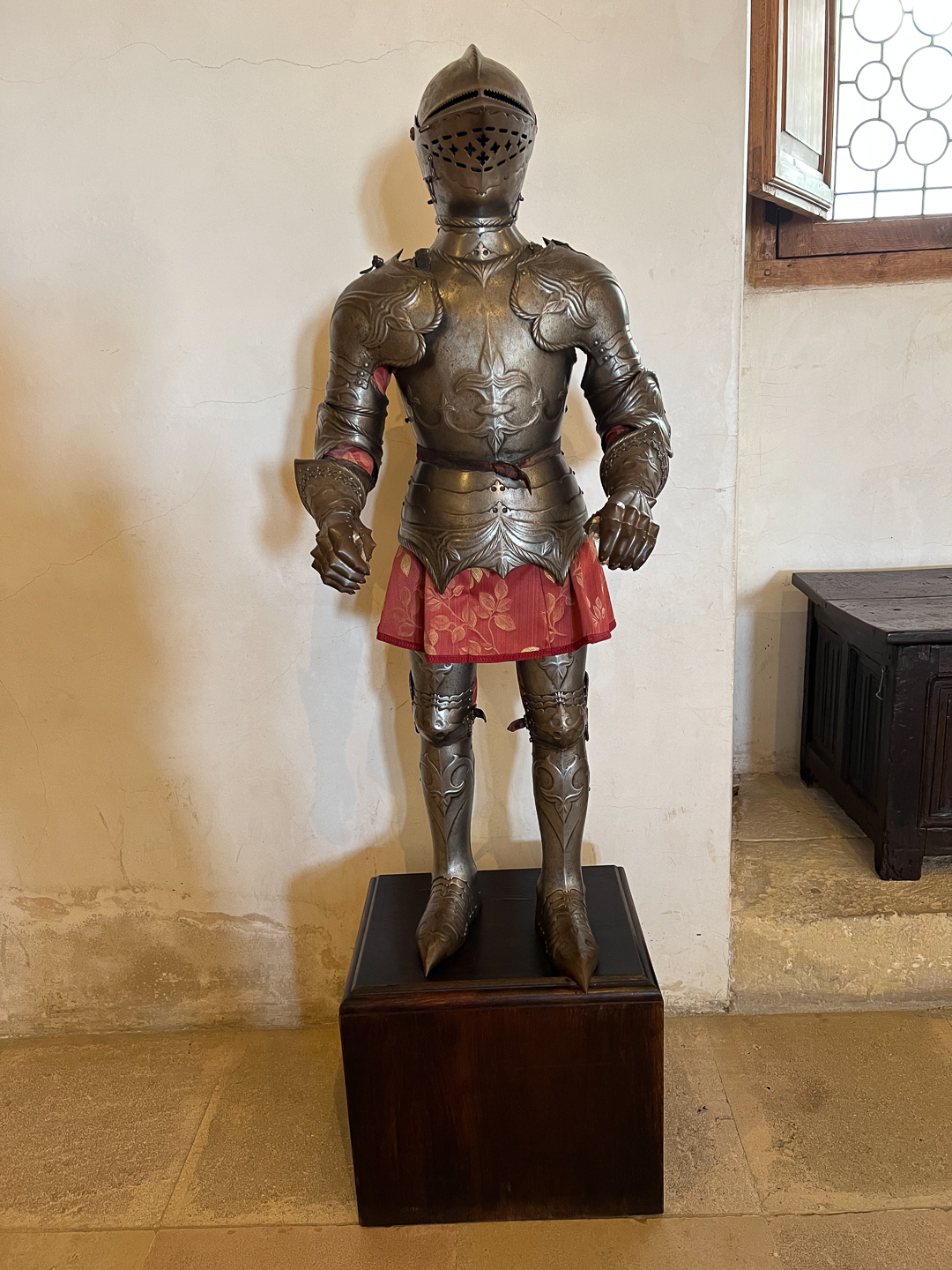 We visited the ceremonial Throne Room, complete with tapestry on the wall and a stained glass window showing Ferdinand on his horse which is standing on the severed heads of a number of Moors. 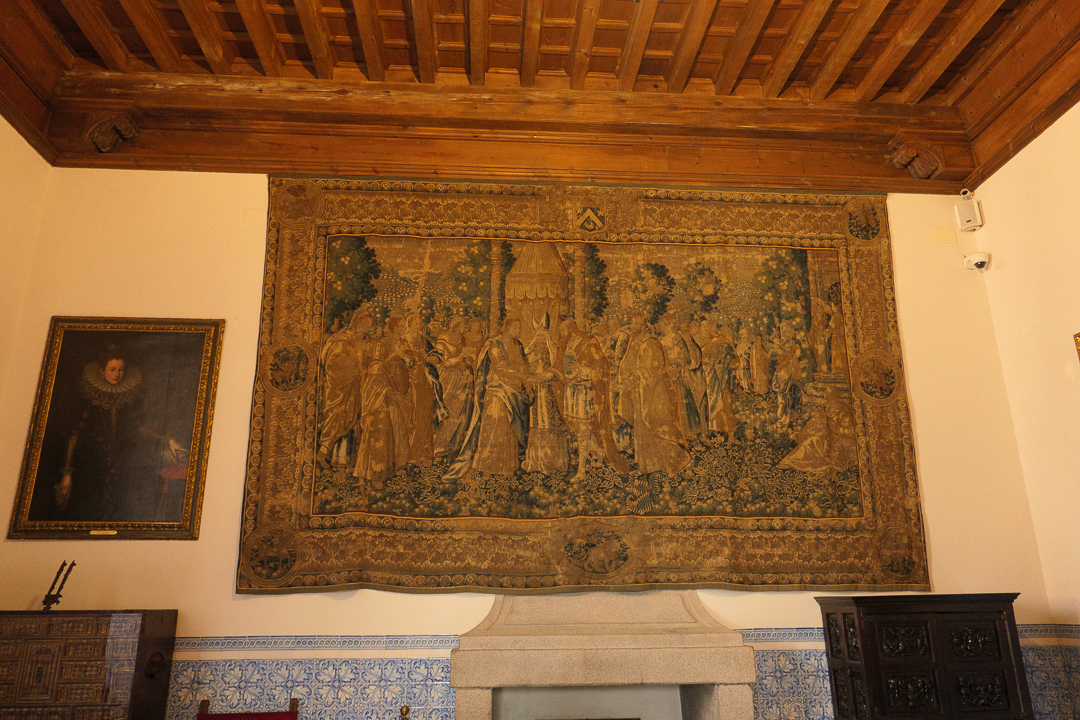 Ironically, the Castle is filled with Moorish designs and architecture. 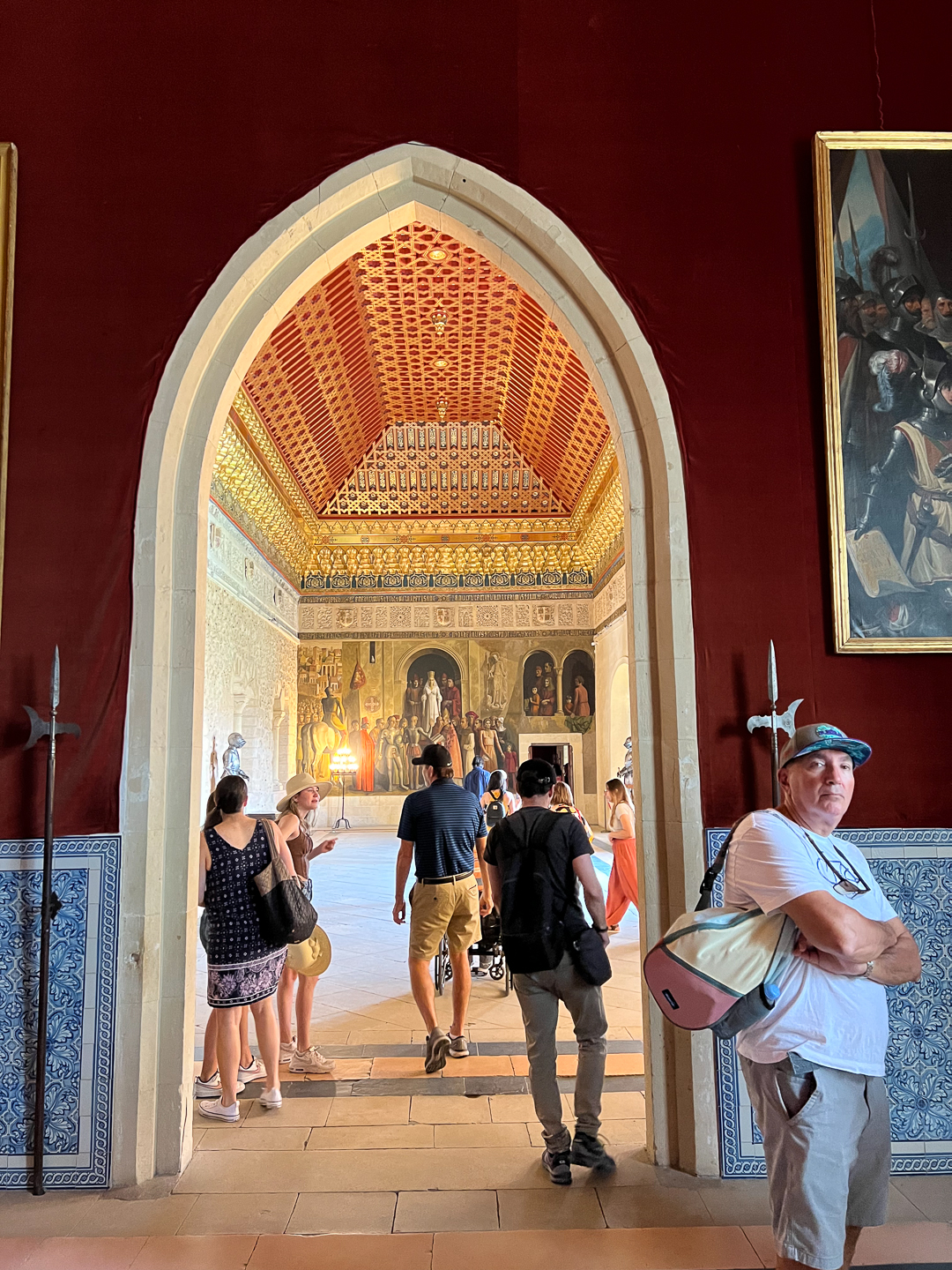 Isabella’s coronation was commemorated on the walls. 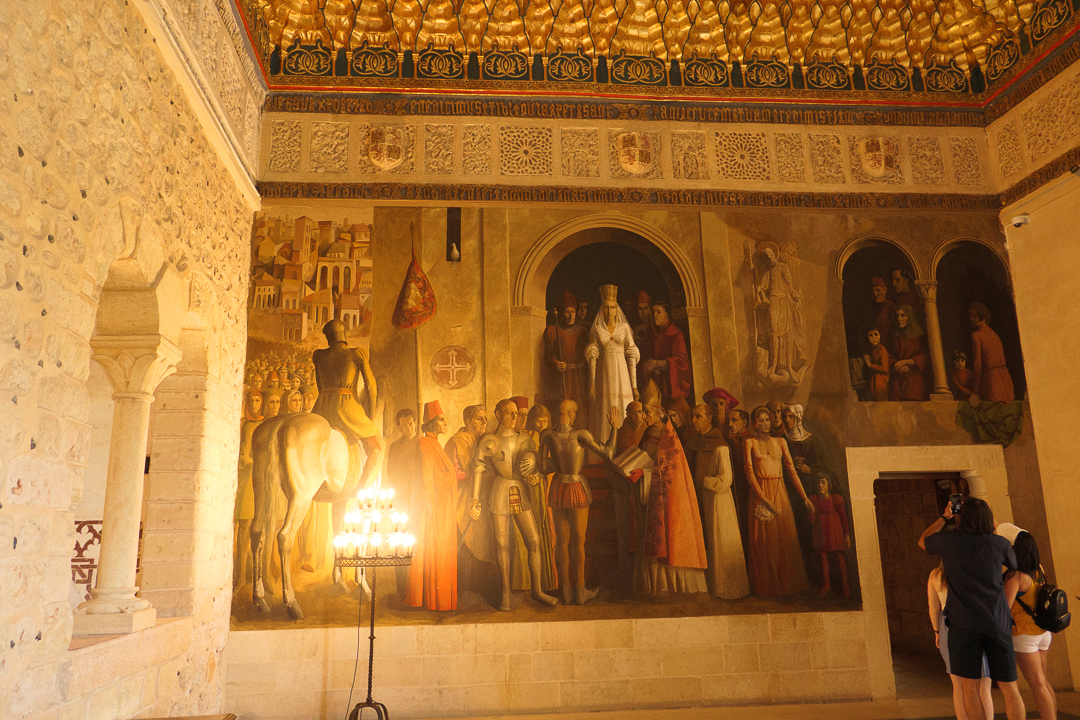 It was well worth the visit.

We doubled back to the Jewish Quarter to see the Abraham Seneor House; Seneor was a major funder to Ferdinand and Isabella, and was so important to them that he was given a coat of arms and they didn’t force him to convert. He was, however, posthumously converted to Catholicism. 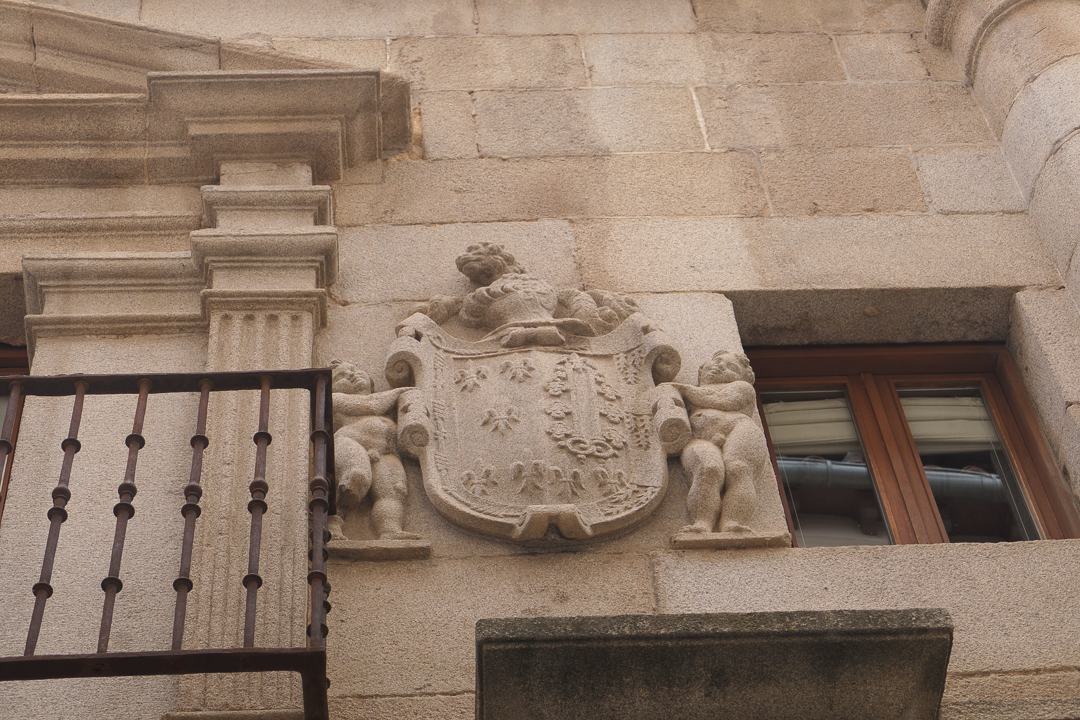 Pepe had made reservations at Casa Duque, an old family restaurant (the current owner is the fourth generation) serving traditional cuisine. We couldn’t have their speciality, roast suckling pig, but what we did have was delicious: Judiones de La Granja con puerro (beans with cod and leeks) as an appetizer and two kinds of lamb as a main course. We had Spanish wine, of course – Muruve Crianza, a 2016 Toro from Zamora. It was time to leave Segovia, but we took one last look at the aqueduct. Pepe had told us that when the Christians came to Segovia, they were reluctant to use pagan constructions like the aqueduct, so they Christianized them by adding, for example, the statue of the Virgin Mary and Baby Jesus in this photo. 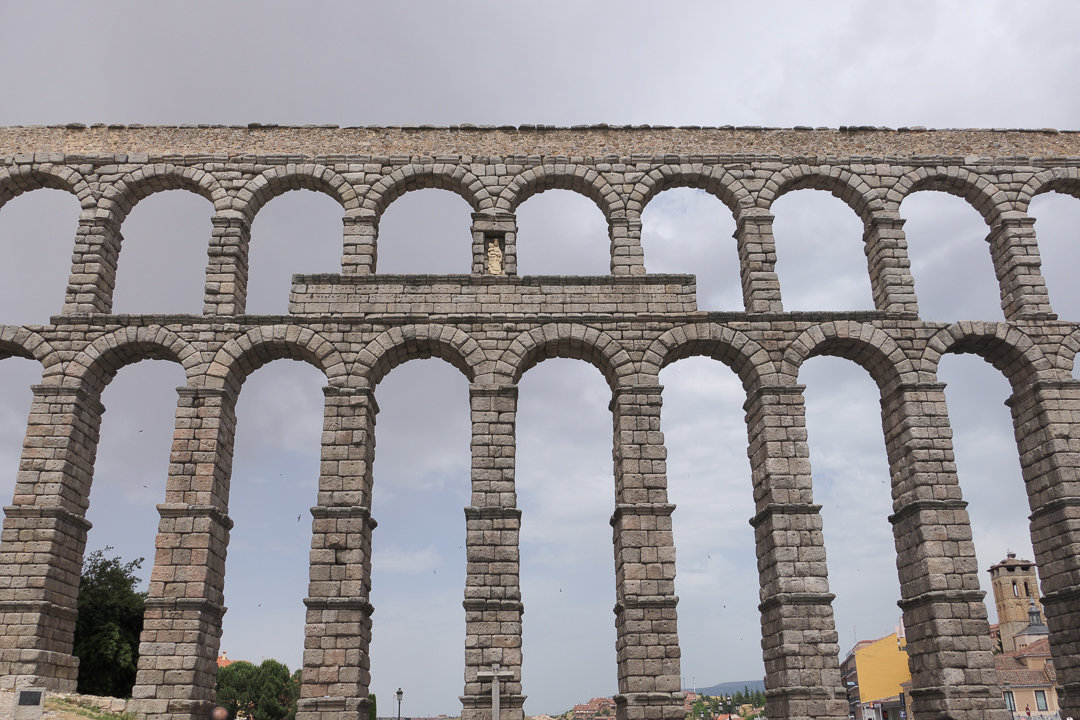 And here we are, saying goodbye to Segovia. Possibly the most shocking thing I saw all day were the fountains – they run 24 hours a day, offering water to all and sundry. I can’t imagine such a fountain in California! On the way back to Madrid, we saw a bridge which reminded me of the Sundial Bridge in Redding; it’s the same architect.

When we got back to Madrid, we holed up in our nice air-conditioned room for a few hours, but ventured out after 8pm. We went to Eccolo Gelato for dinner again, but wandered around a lot and found a few interesting sites.

Our hotel is at the edge of the Barrio de las Letras; there’s a statue to Cervantes across the street from the hotel, but many other Spanish authors are honored by statues throughout the area. 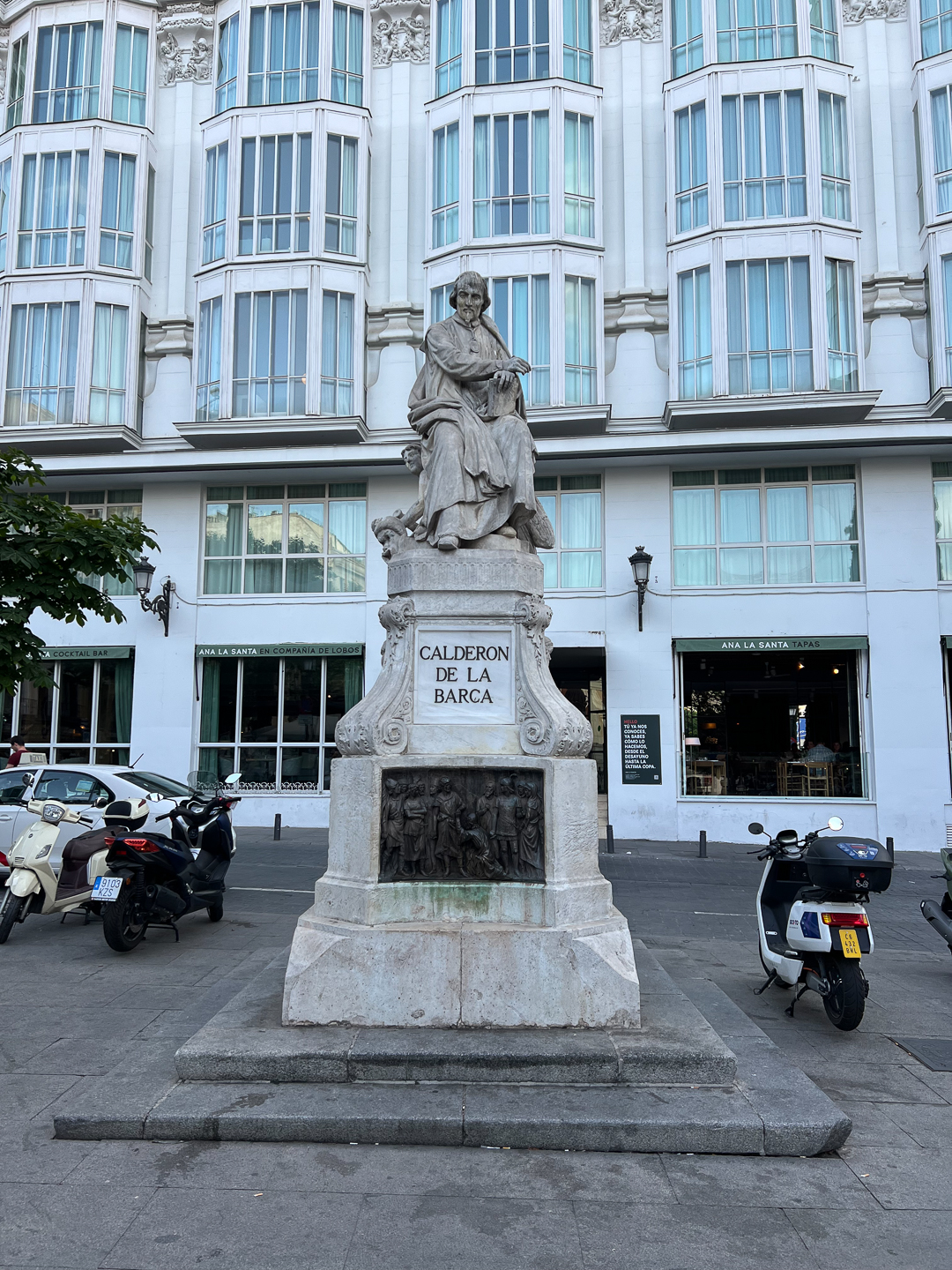 Not all the statues are of authors – here’s one we found near the Sol Metro station. Tomorrow is supposed to be hotter than today, and we have a walking tour of Madrid planned for the morning. I’m hoping the temperature will stay under 100°F, but I doubt it.