Our day started with a trip to Robben Island, which was used as a prison by the Dutch, the British, and the South African governments; its most notable prisoner was Nelson Mandela, and our guide today was his guard, Christo Brand. 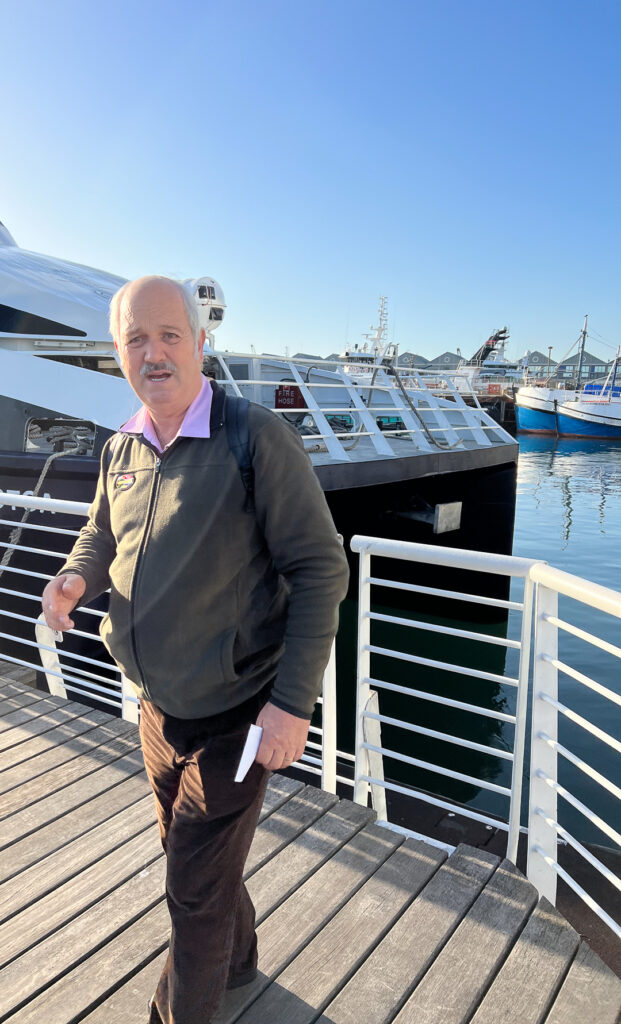 We boarded the good ship Krotoa at the Nelson Mandela Gateway to Robben Island and were quickly on our way for the half-hour trip. They showed a very interesting video on the way out, giving the history of Robben Island since about 30,000 BCE and taking us right up to the 1980s. I did manage to pull myself away from the video long enough to enjoy the view of Cape Town and Table Mountain.

We boarded a bus to tour the island. Our guide was a man named Thabo (which means “Happiness” in Southern Sotho, one of South Africa’s eleven official languages) – he had come to work at Robben Island after it became a museum.

Robben Island, in addition to having been a prison for centuries, also served as a leper colony from 1846 to 1931; our first stop was at the Leper’s Graveyard. 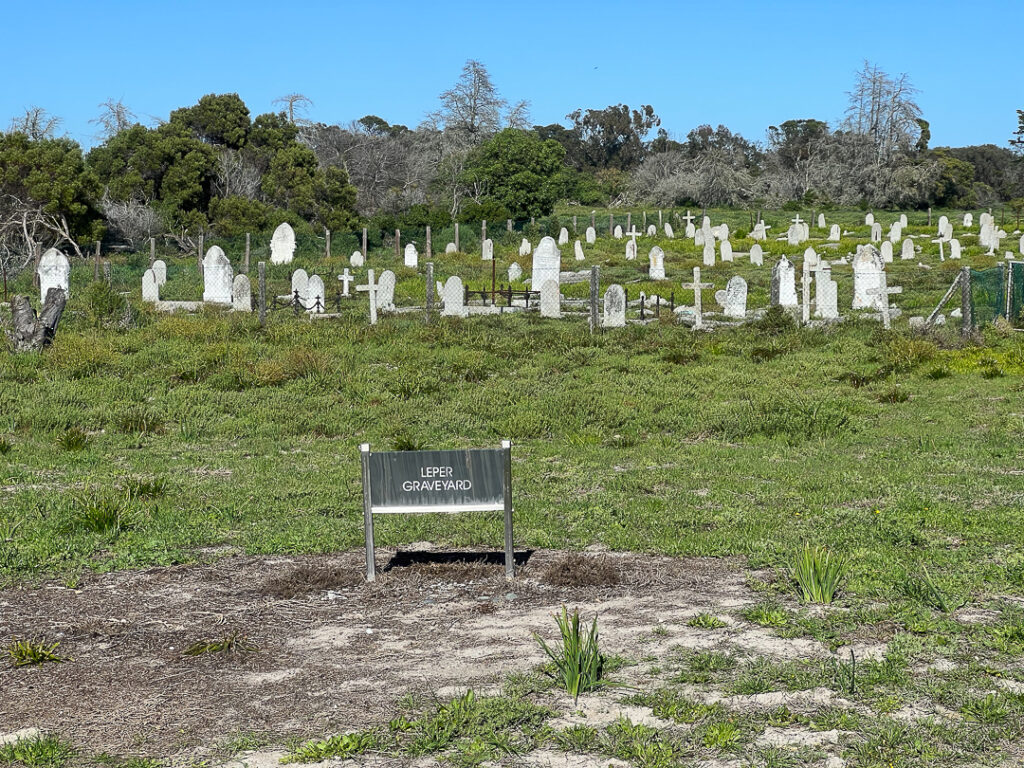 All of the buildings used for the leper colony were destroyed after the colony was closed down except for the Good Shepherd Church. 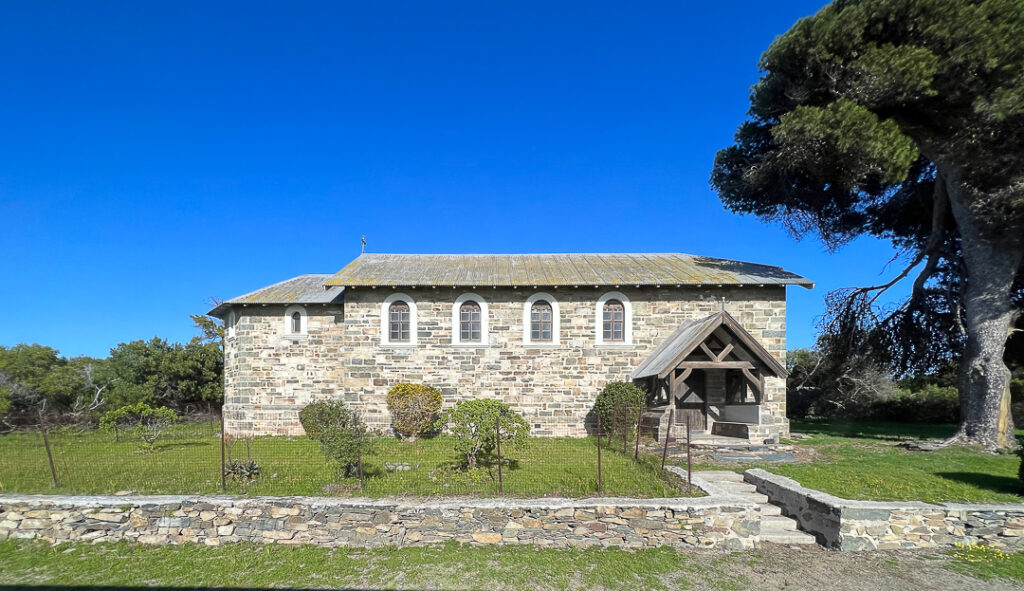 The guards and their families worshiped at the Garrison Church. 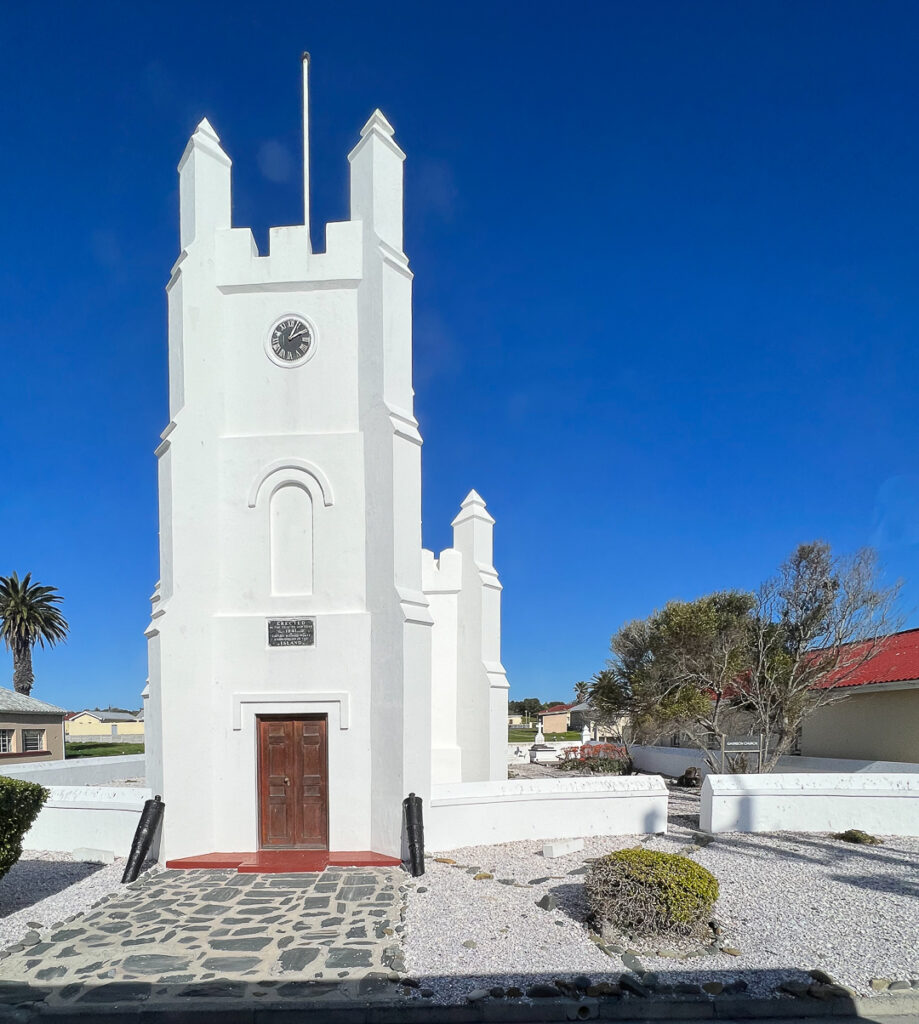 We stopped for refreshments and enjoyed a great view of Table Mountain. 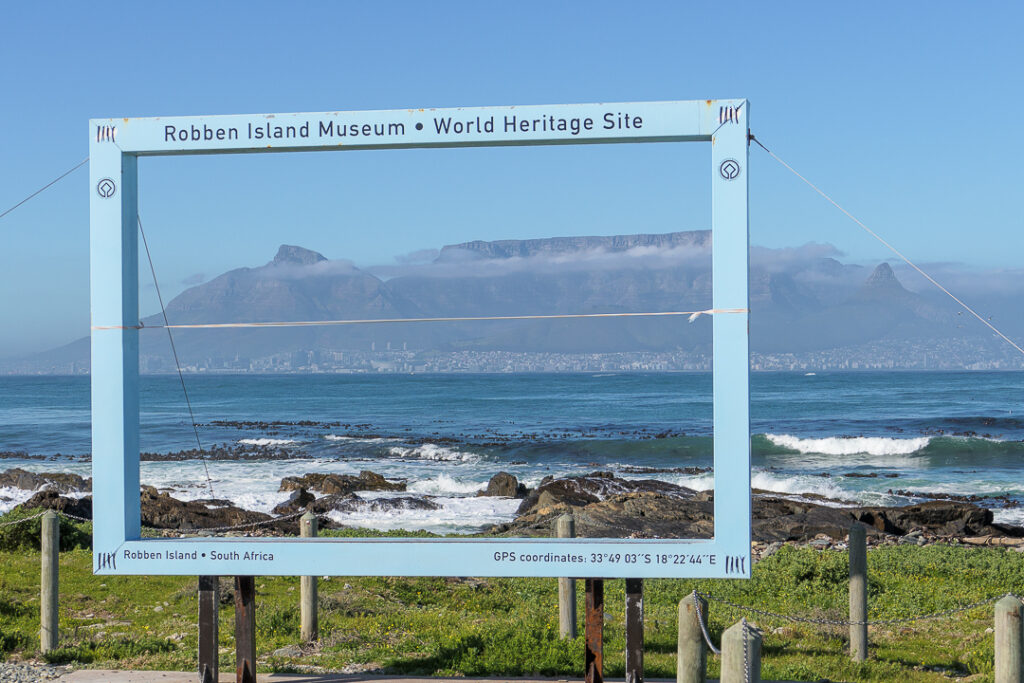 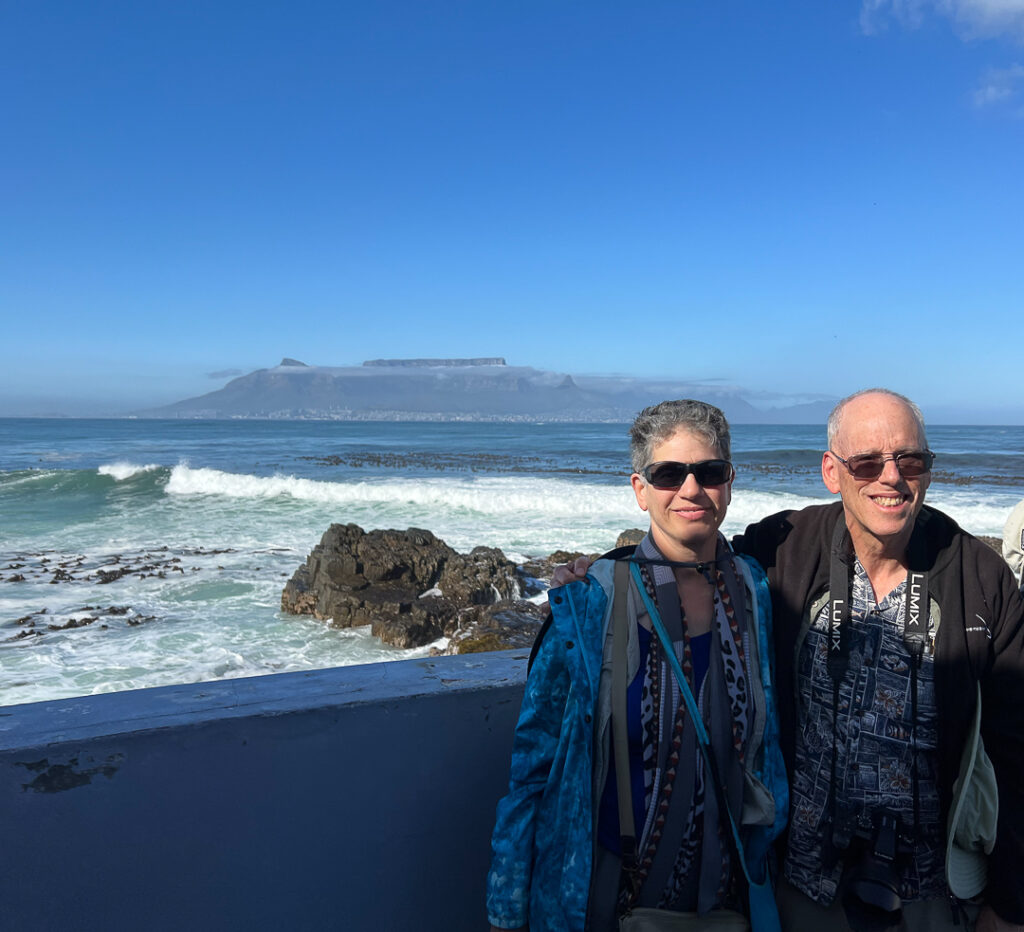 Then it was back on the bus to see more of the island; there were lots of birds and other animals in the veldt. 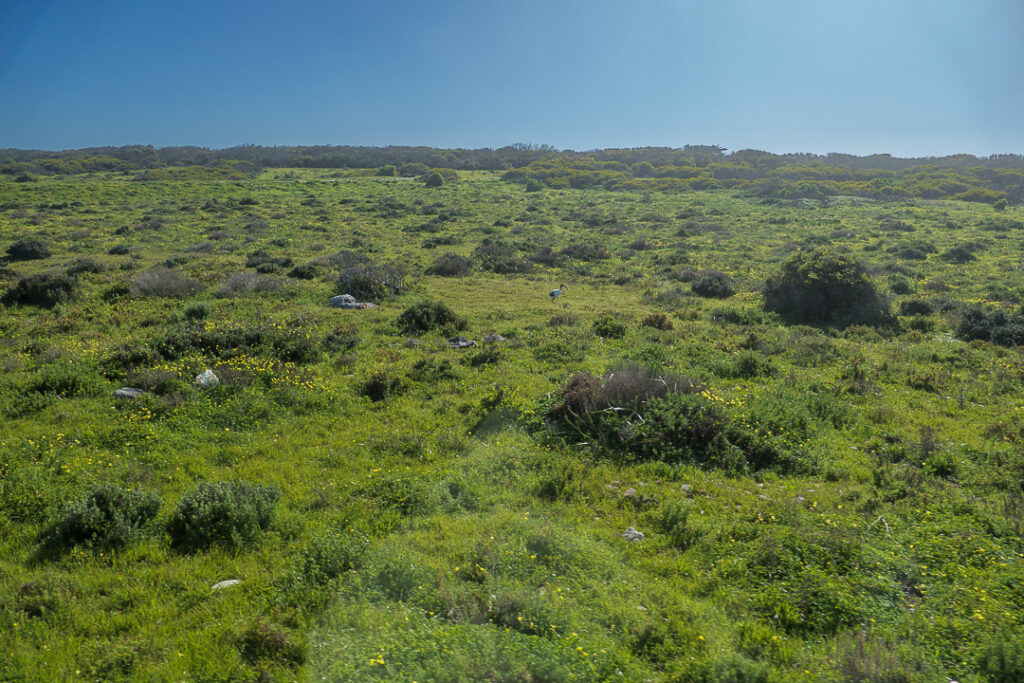 There’s been a lighthouse on Robben Island for a long time; the current lighthouse is automatically controlled. 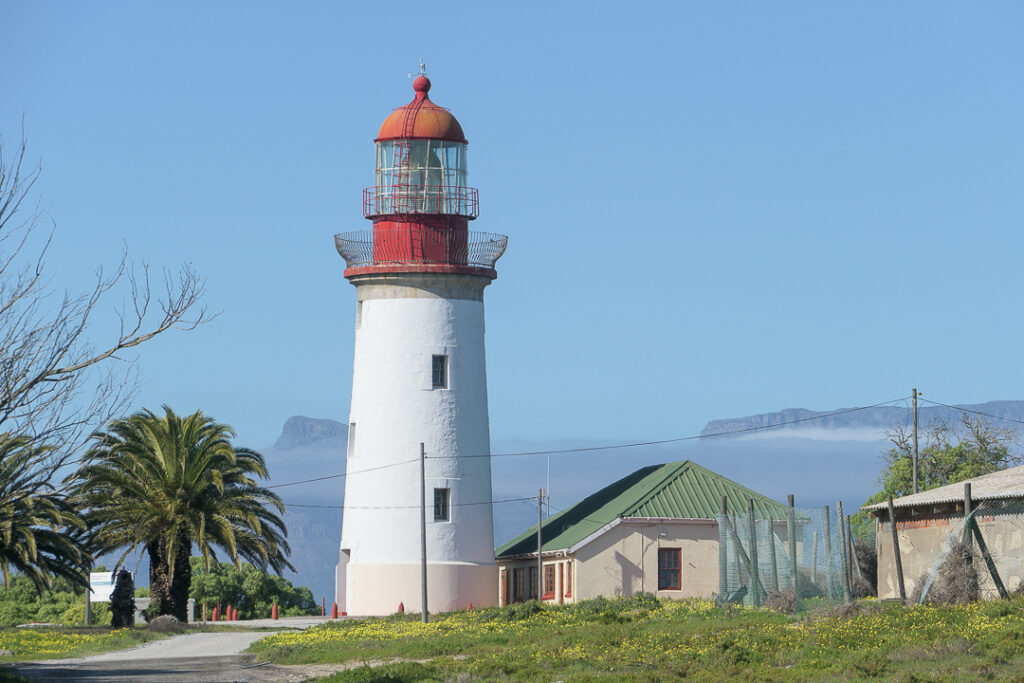 One of the early prisoners on Robben Island was Sayed Adurohman Moturu, the Prince of Madura. He was exiled to the island in the mid 1740s and died there in 1754. The Moturu Kramat was built in his honor in 1969 and is considered a holy site for Muslims. 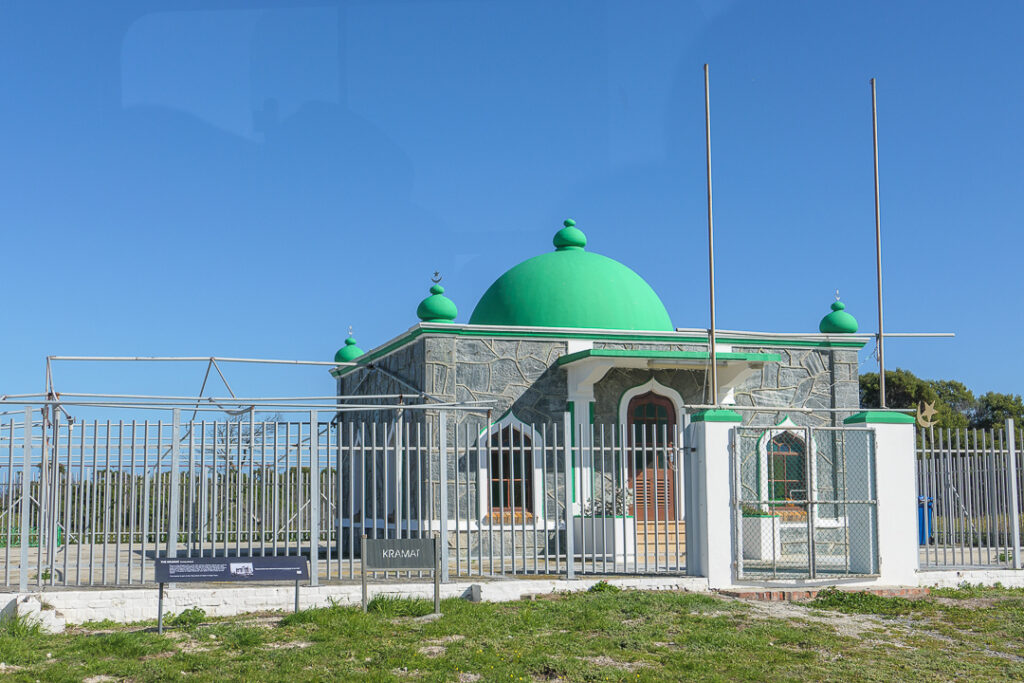 Thabo left us when we reached the prison.

We were joined by Sipho Msomi, who had been a prisoner on Robben Island from 1984-1988 (he was 22 when he was imprisoned); Christo had been assigned to his cellblock and the two of them had become friends during their time at the Museum. 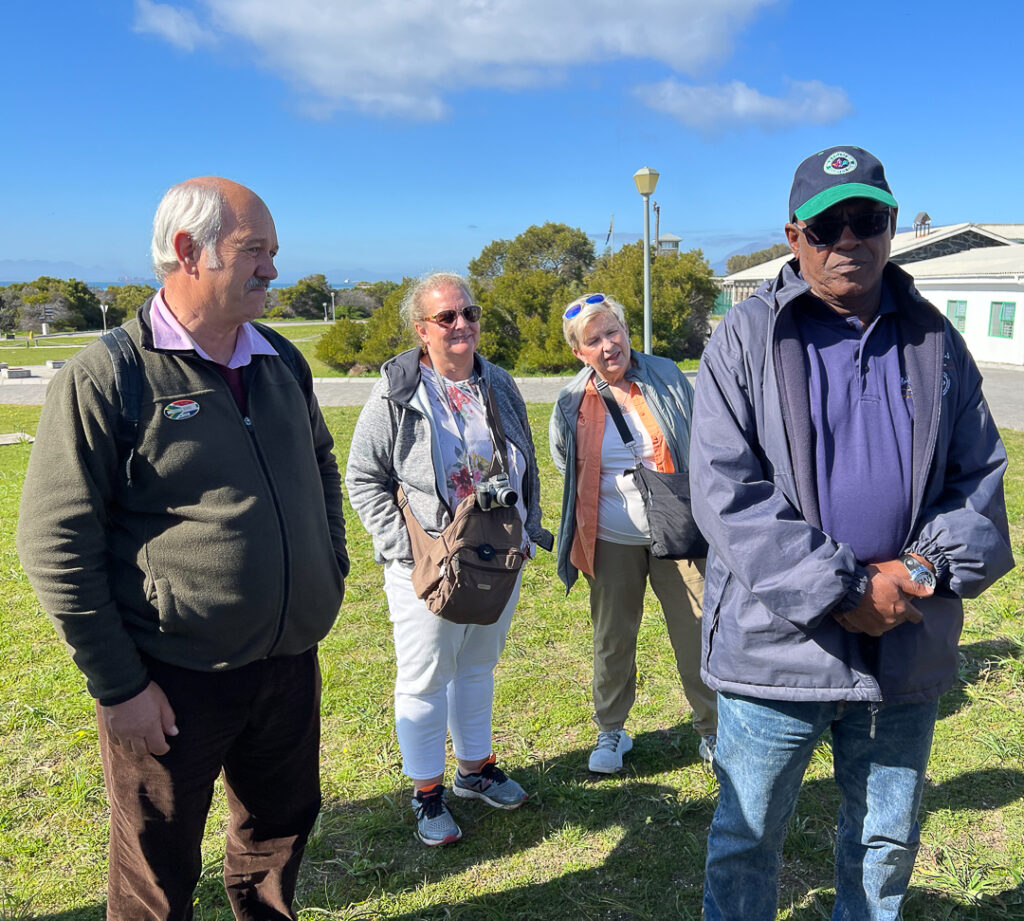 Sipho pointed out some of the leaders of the anti-apartheid movement who had been imprisoned on Robben Island. 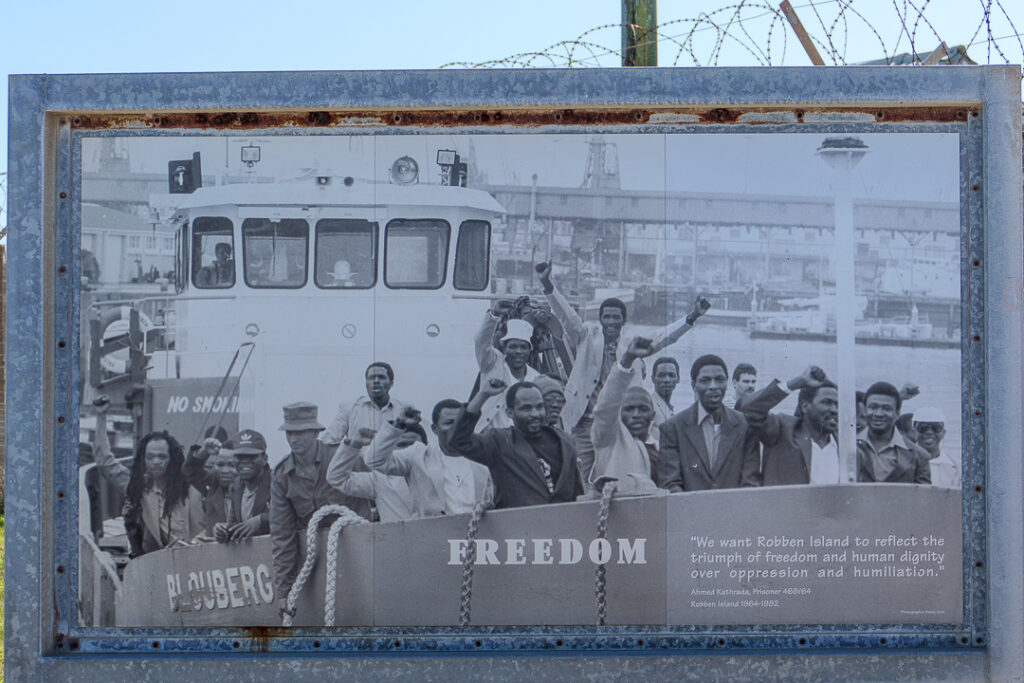 He took us into the cellblock and told us what life was like there. The prisoners had secret ways to communicate (including putting messages in tennis balls), and, over time, a little more freedom, including being able to compete in sports. Christo told us that the guards trained the prisoners they were guarding and bet on their teams! 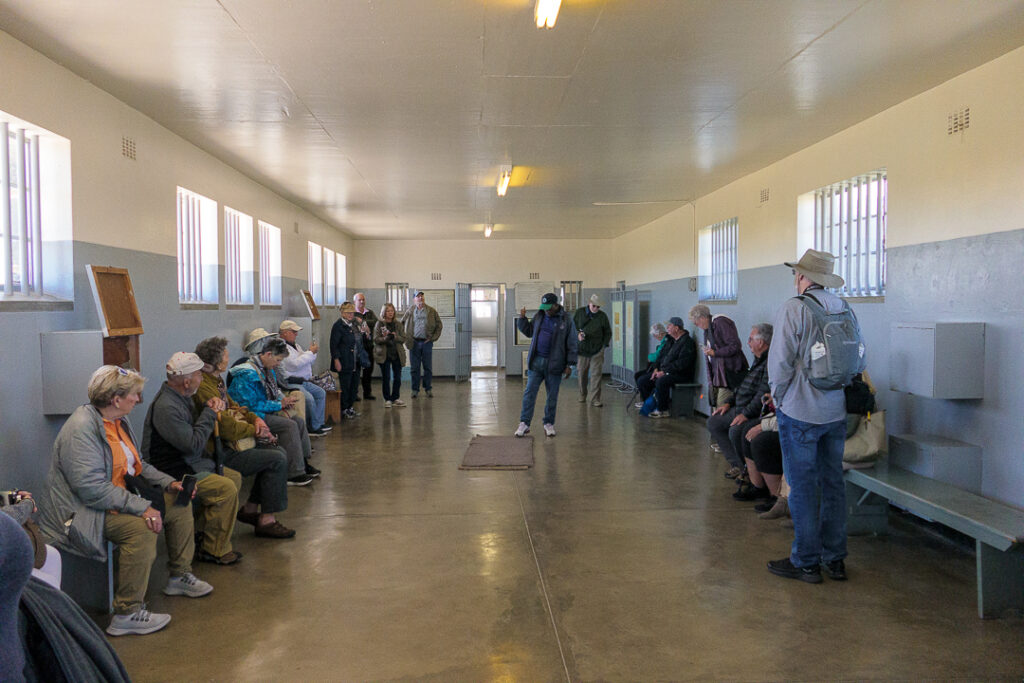 “Petty apartheid” covered a lot of arbitrary restrictions on non-whites, and it existed even in the prison. Blacks were fed less well than Asians and Coloreds – but they had to work as hard. 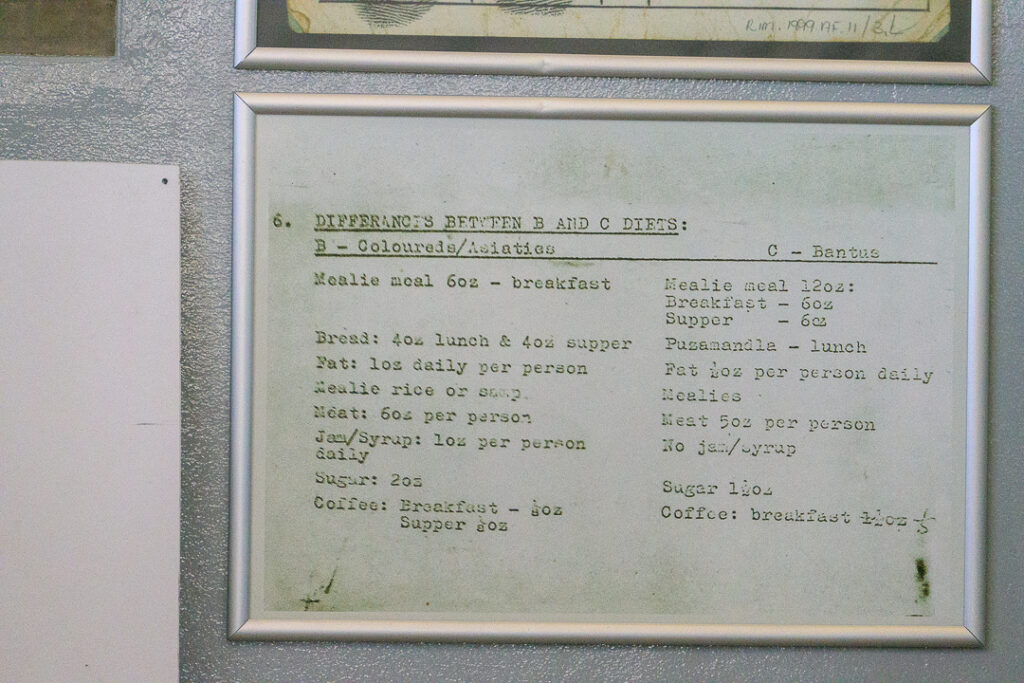 Christo and Sipho told us stories of the interactions between guards and prisoners – fascinating and frightening, but also hopeful. 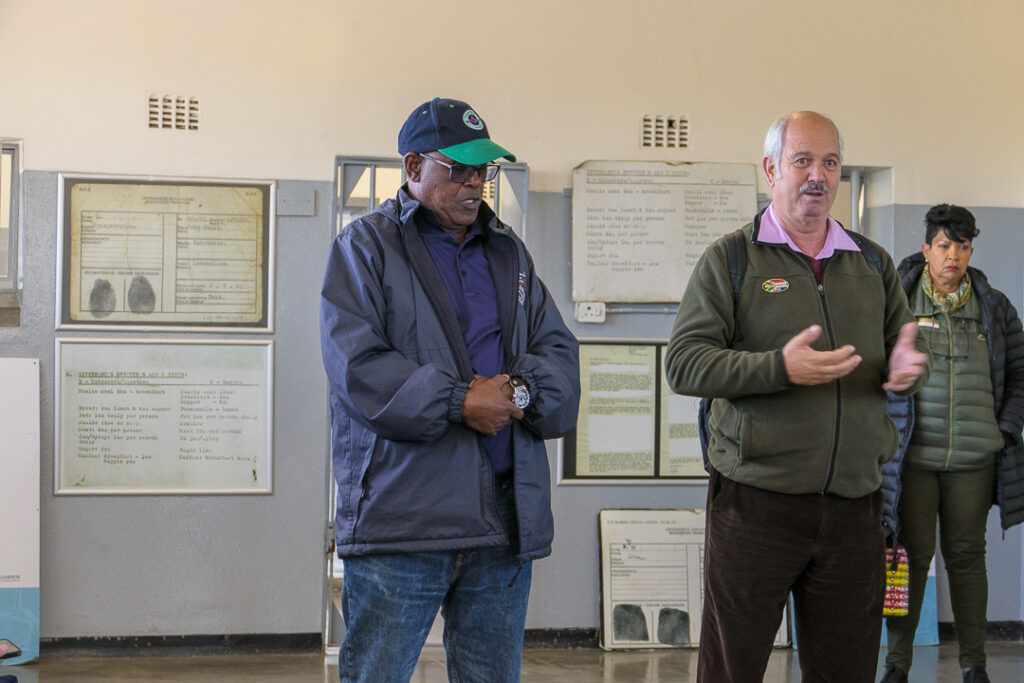 Prisoners could receive mail from the outside, but not much, and it was heavily censored. 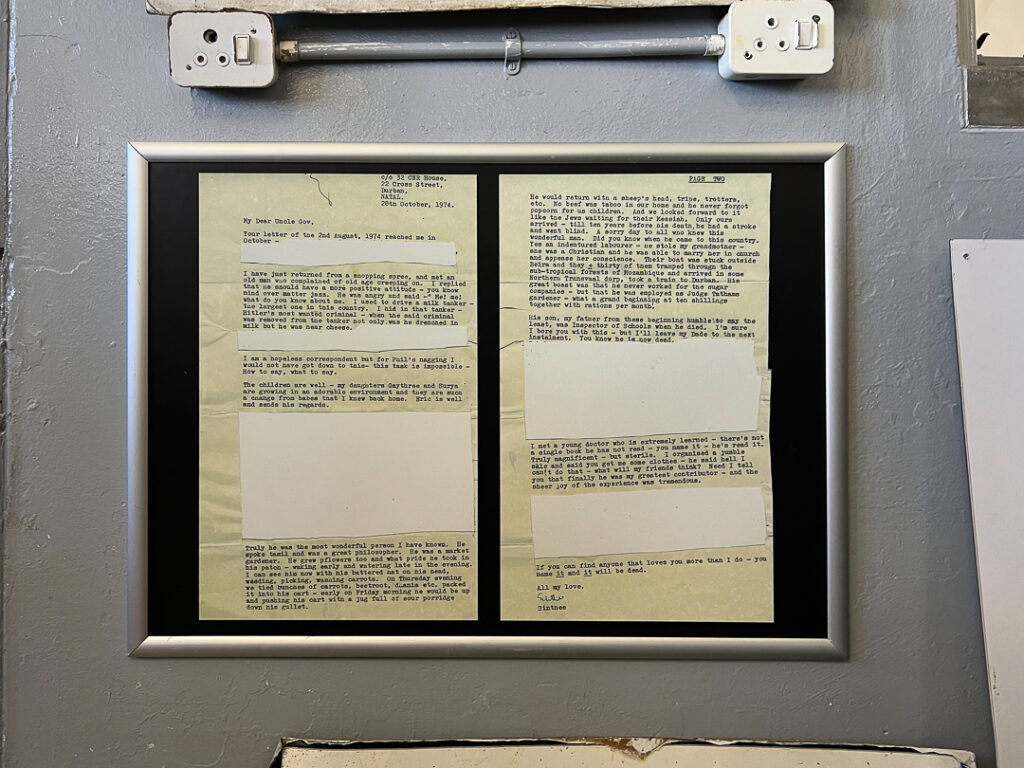 Our final stop in the prison was a quick visit to Nelson Mandela’s cell (he was kept apart from the general prison population) for a photo op; Christo took the picture, but I still think it qualifies as a cell-fie. 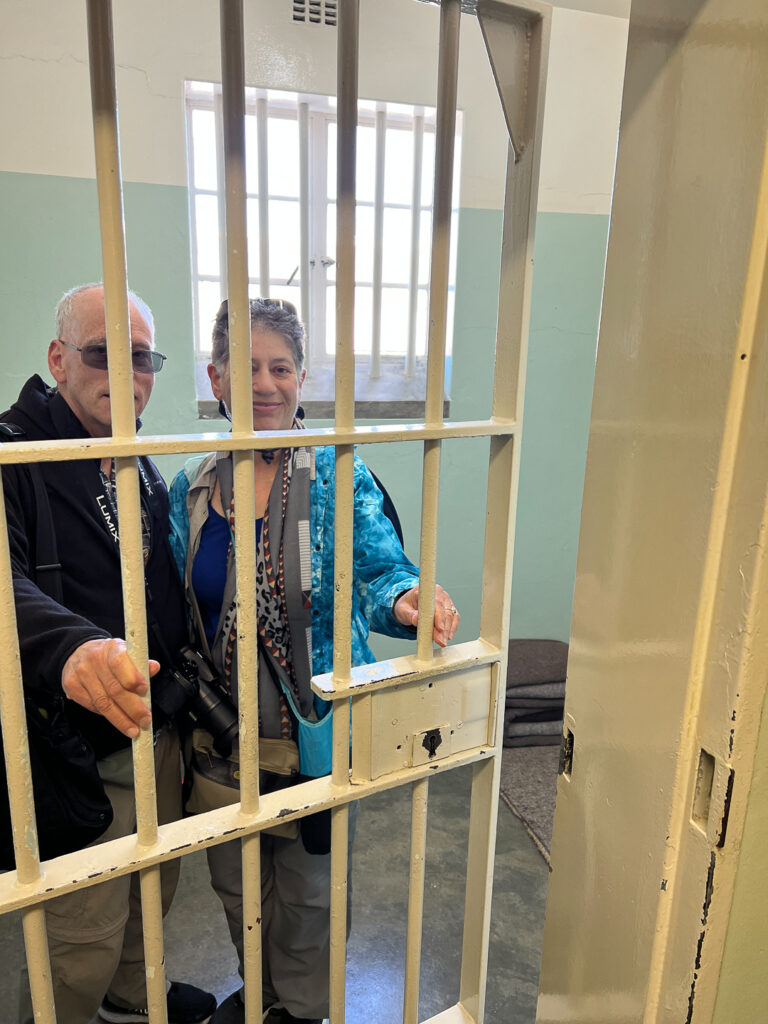 On our way back to the dock to board the Krotoa for the trip back to the mainland, we saw a few World War II artifacts, like this pillbox.

When I saw this sign at the entrance to the museum, I was afraid it had been erected by the guards (much like the signs leading into Nazi death camps). I was happy to learn that the museum created it; everyone I met there was proud of the work that the museum is doing, and I was very happy to have gone there. 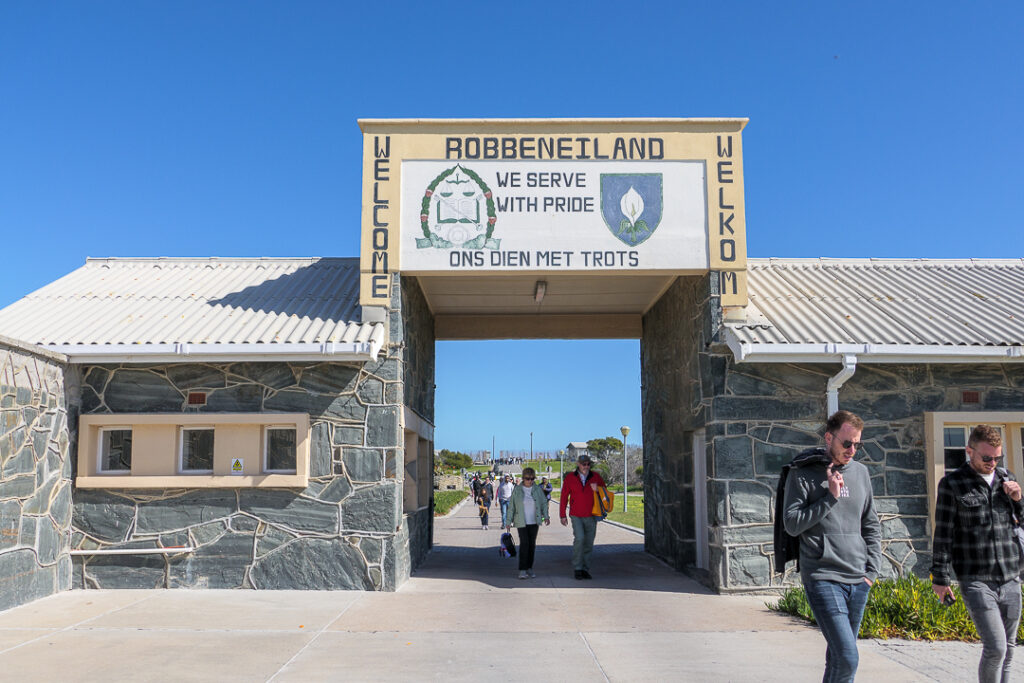 We returned to Cape Town and walked through the V&A Waterfront to meet our bus. Table Mountain was out in all its glory, and I couldn’t resist another photo. 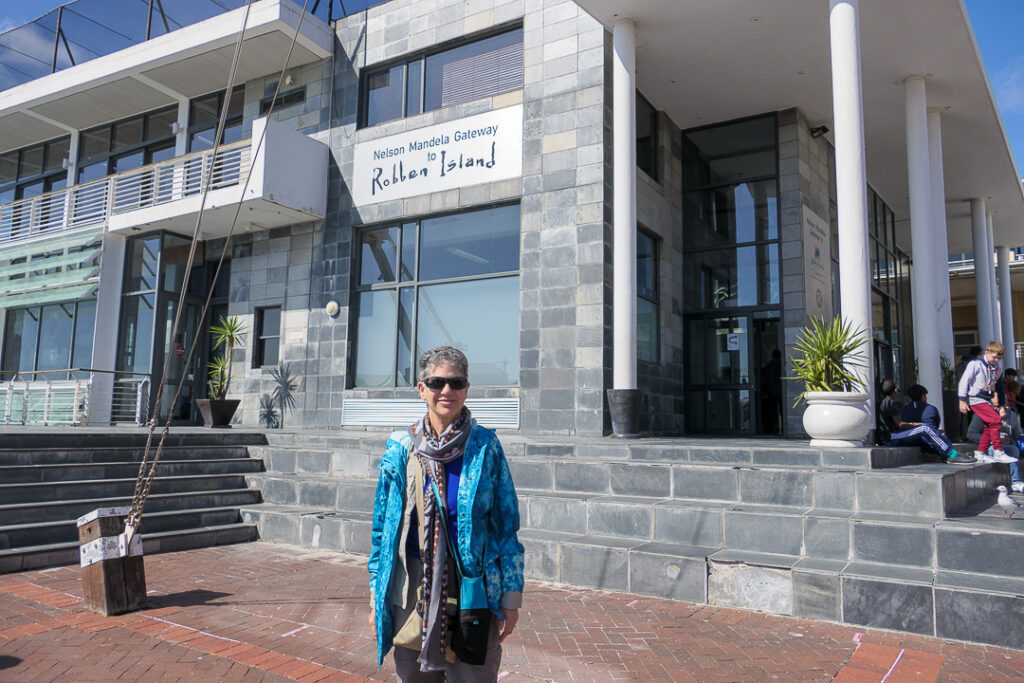 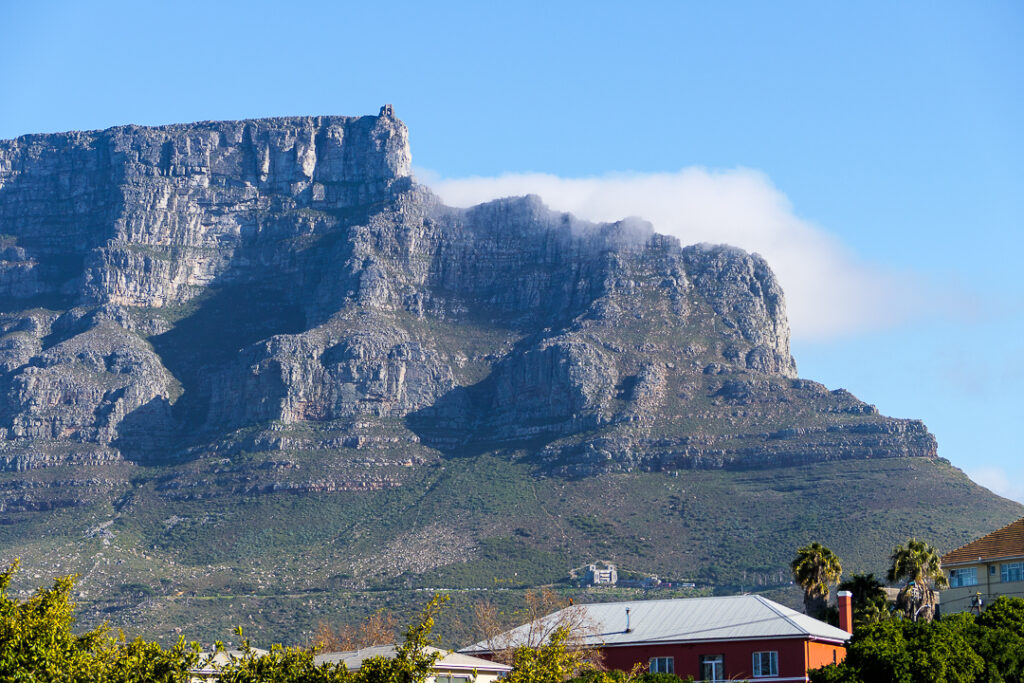 After another terrific lunch (this one at Karibou in the Victoria Mall), we boarded the bus for a tour of Bo-Kaap, the former Malay Quarter of Cape Town. Our guide told us about its history and showed us around; today, it’s known for its brightly colored houses and shops, like these. 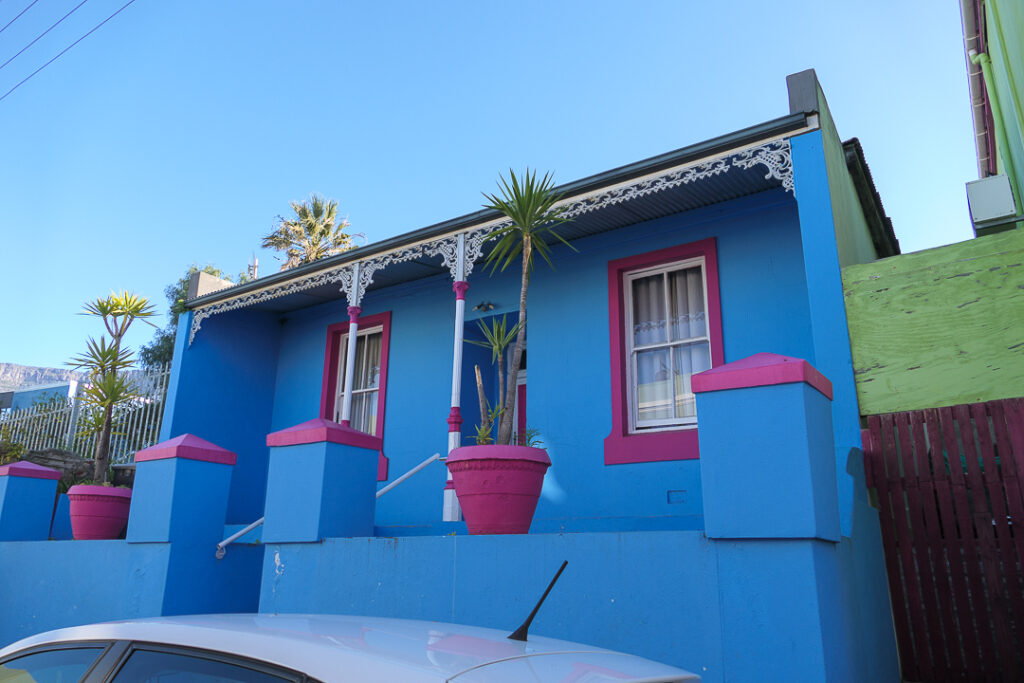 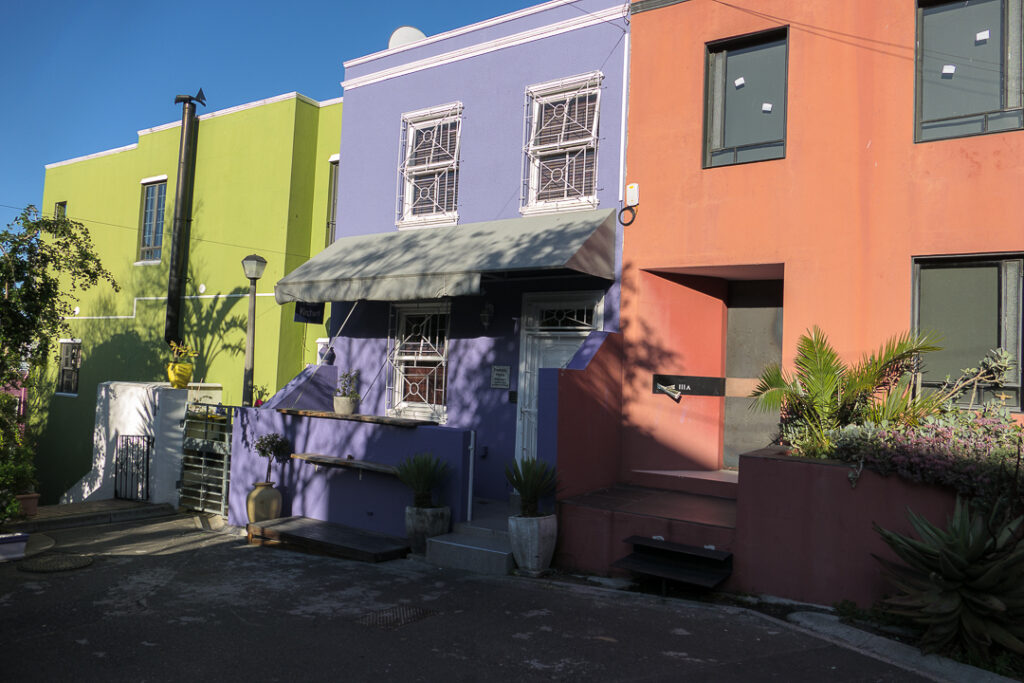 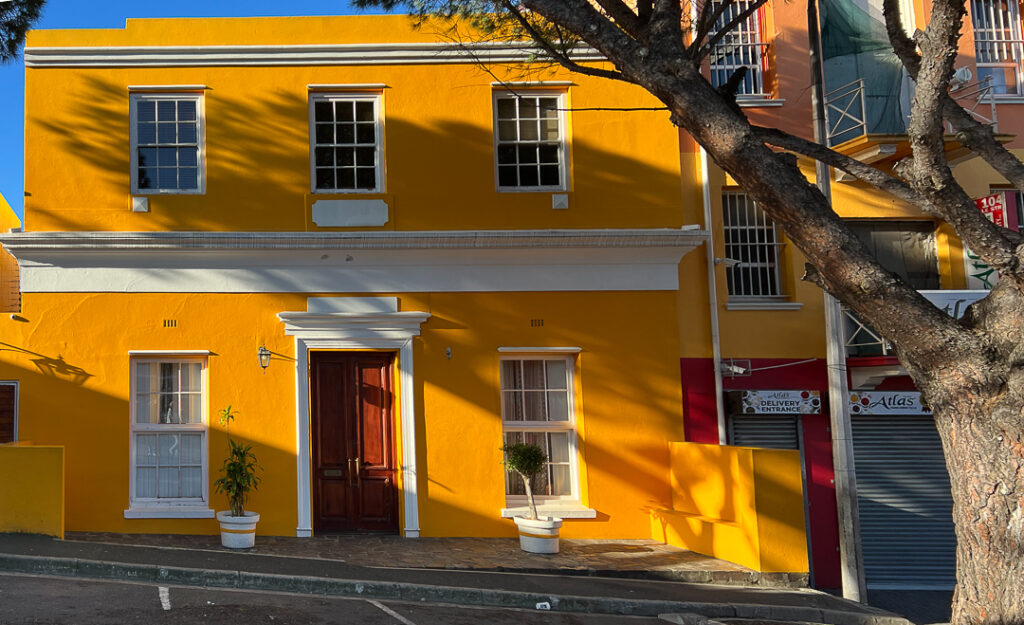 Our final stop for the day was at Table Mountain – specifically, at the lower station of the Table Mountain Cable Car. The cable car is closed for annual maintenance until the end of the month, so we couldn’t ride it, but we could see where it would have taken us. 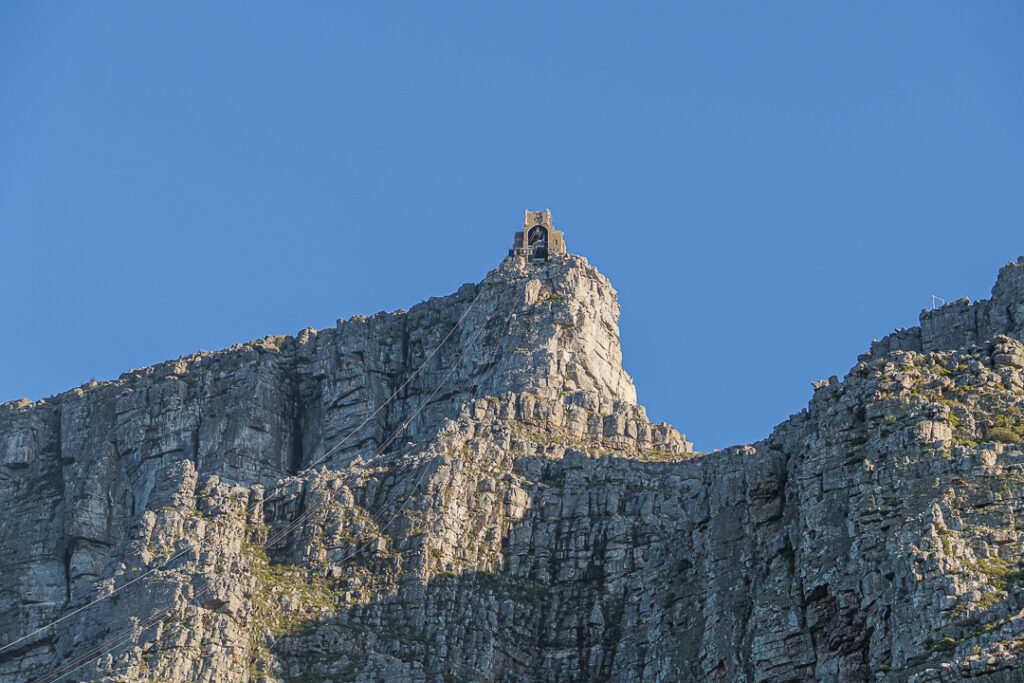 There were a few people walking up or down the mountain trail (it takes about 90 minutes each way), but I was happy with the view from the station. 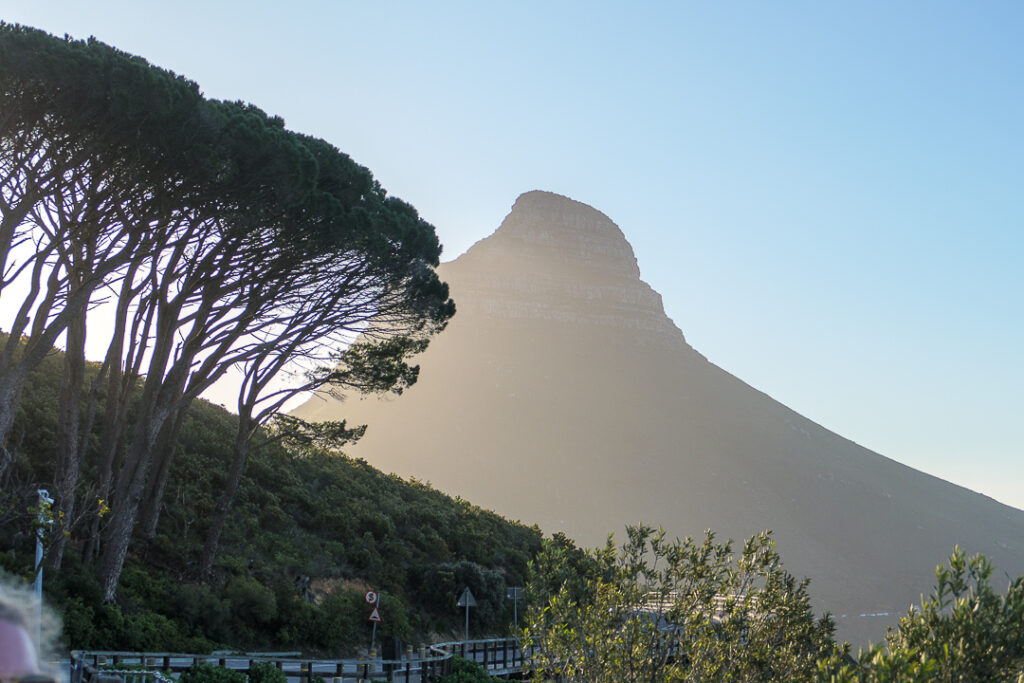 And then it was back to the hotel to pack and prepare for an early departure tomorrow for the trip to the Zambezi Queen.