The only excursion available today was the “West Point Experience”, a guided tour of West Point. We chose the early departure, so we were on the bus at 8am and were at West Point just before 9am, where our guide, Bill, met us.

Our first stop was the Cadet Chapel, which is the largest of the nine chapels on post. It dates from 1911 and is built, like most of the other buildings on post, in the “Military Gothic” style. 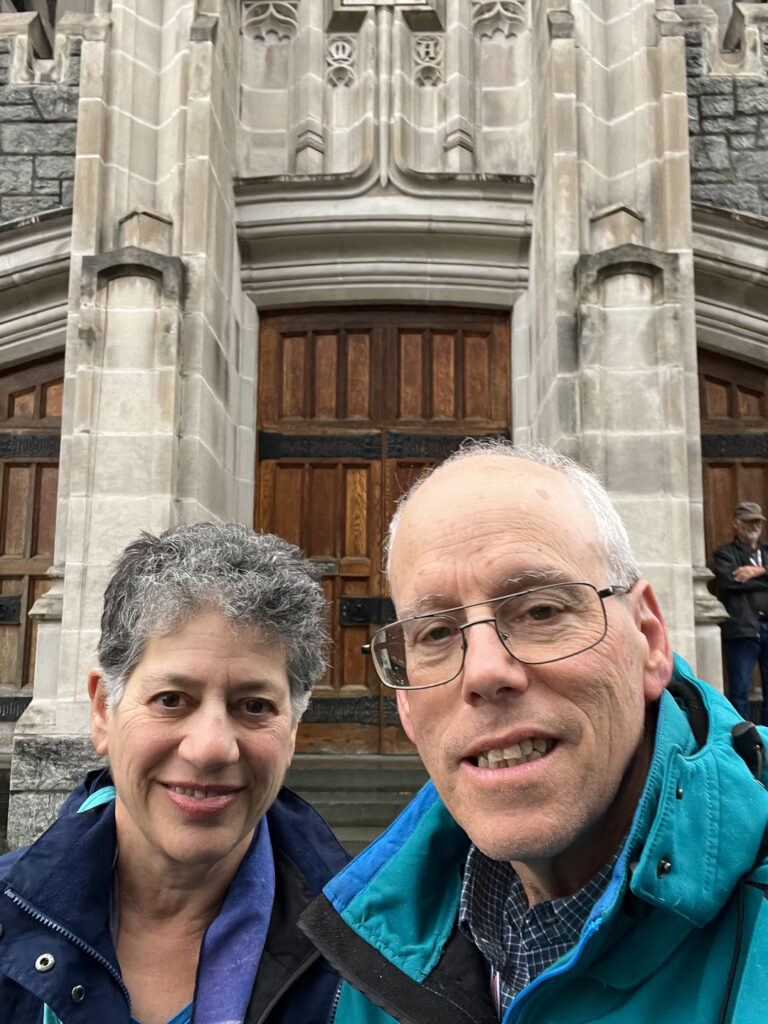 When we entered the building, the first thing that struck me was the meticulous arrangement of the prayer books in the pews. 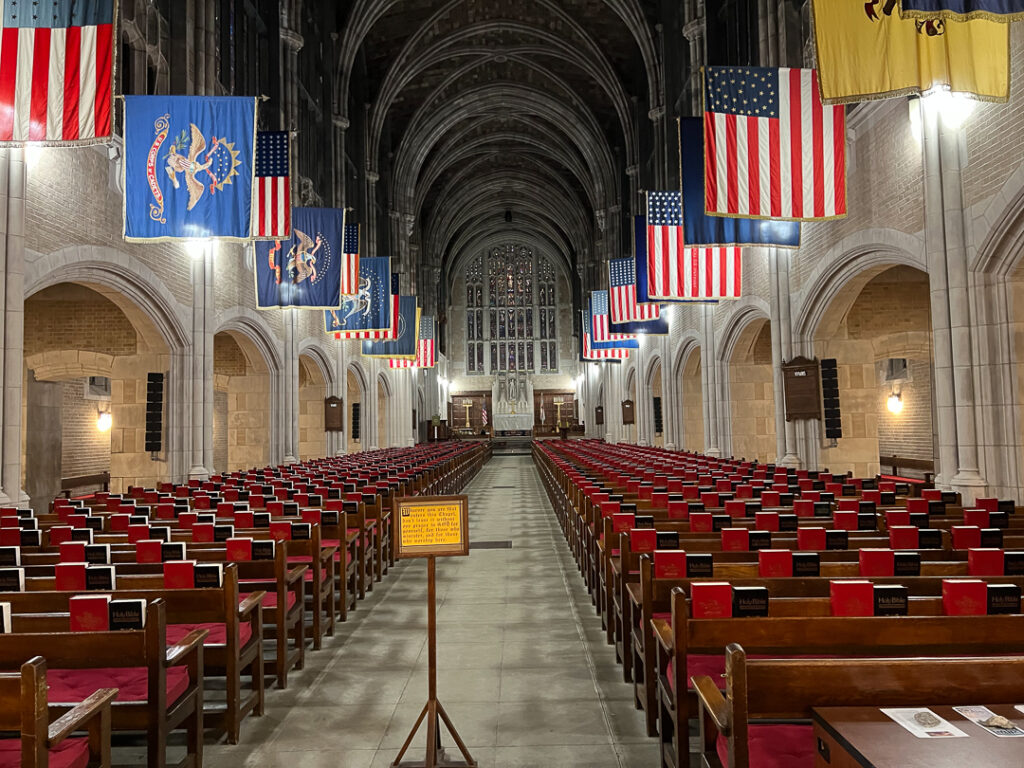 One pew was roped off and marked with a candle. It is in honor of missing POW/MIA service members. 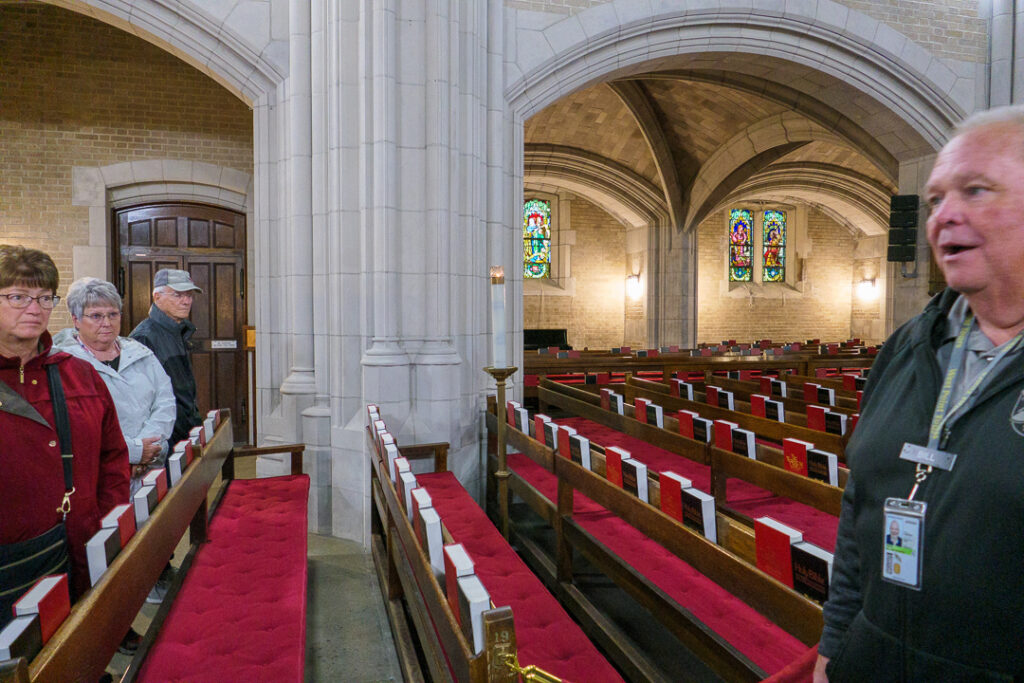 The chapel has the largest church organ in the world, with 23,511 pipes. The control panel is intimidating. 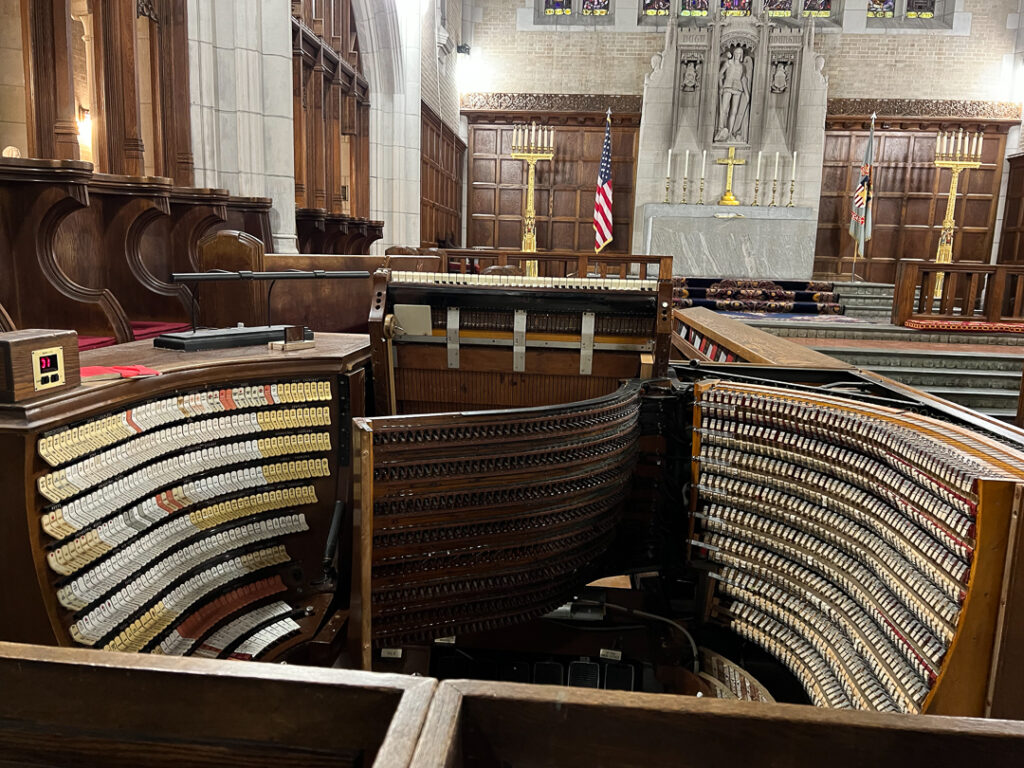 We didn’t visit any of the other chapels on post, even the Orthodox Chapel of Saint Martin, which is in the basement of the Cadet Chapel. I would have liked to have seen the Jewish Chapel, of course.

We got back on our bus and were dropped at the parking lot near [The Plain](https://en.wikipedia.org/wiki/The_Plain_(West_Point), where I saw a most unusual sign. I wonder how they enforce it? 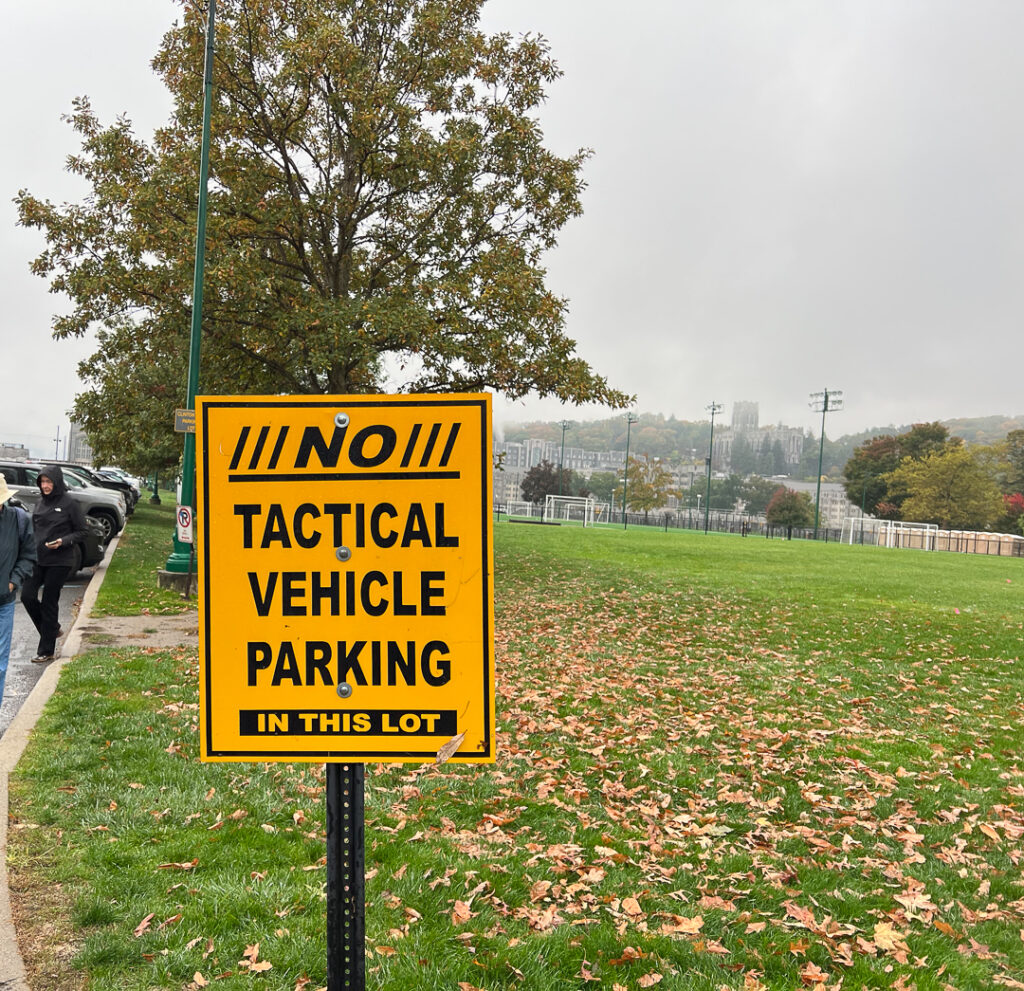 We crossed the road to get a better understanding of why West Point was so important during the Revolution. The view from Sherburne’s Redoubt tells the story – West Point is in a commanding position to control the Hudson River. The view wasn’t bad, either! 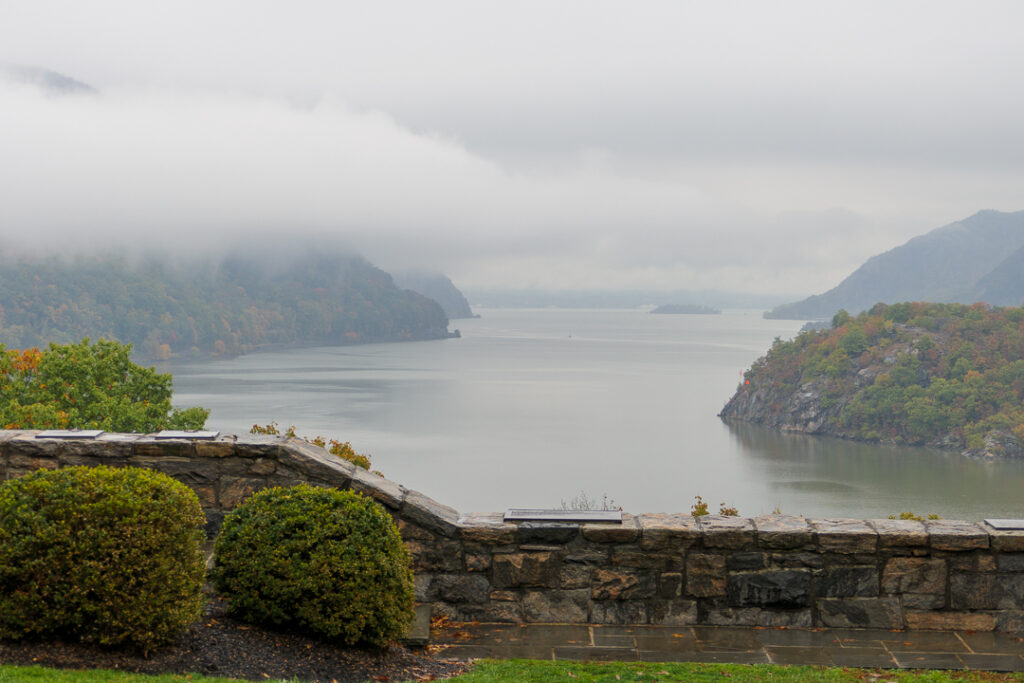 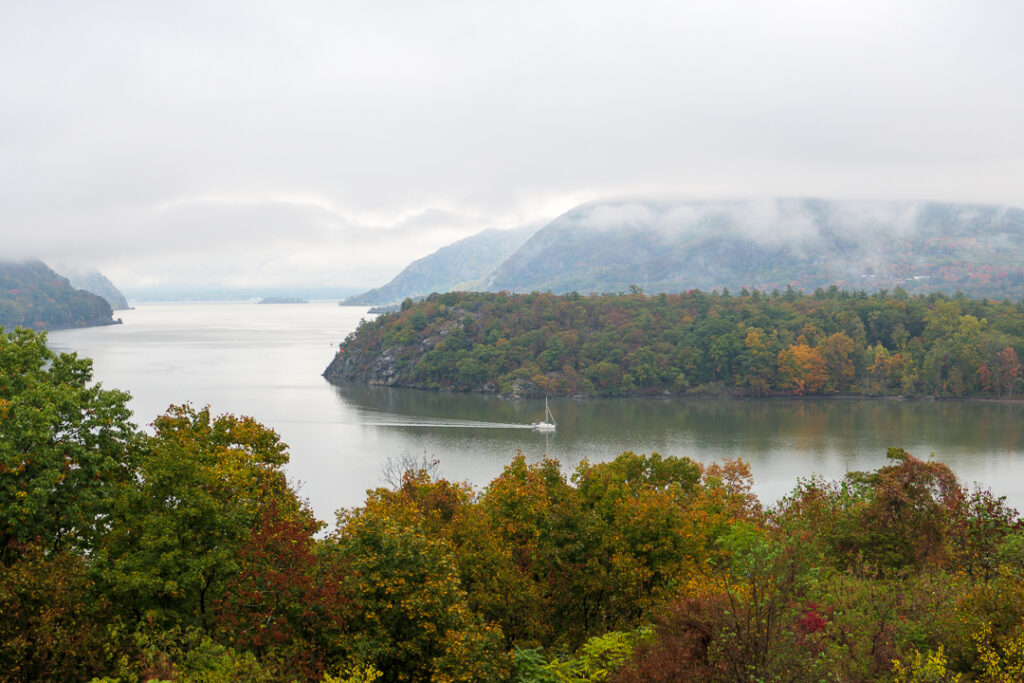 The Americans were worried that the British might come up the Hudson and cut off the New England colonies, so they built the “Great Chain” to prevent British ships from doing so – it was made of 100-pound links of iron, connected by pieces of wood, so that no ship could get through. And the British never tried. 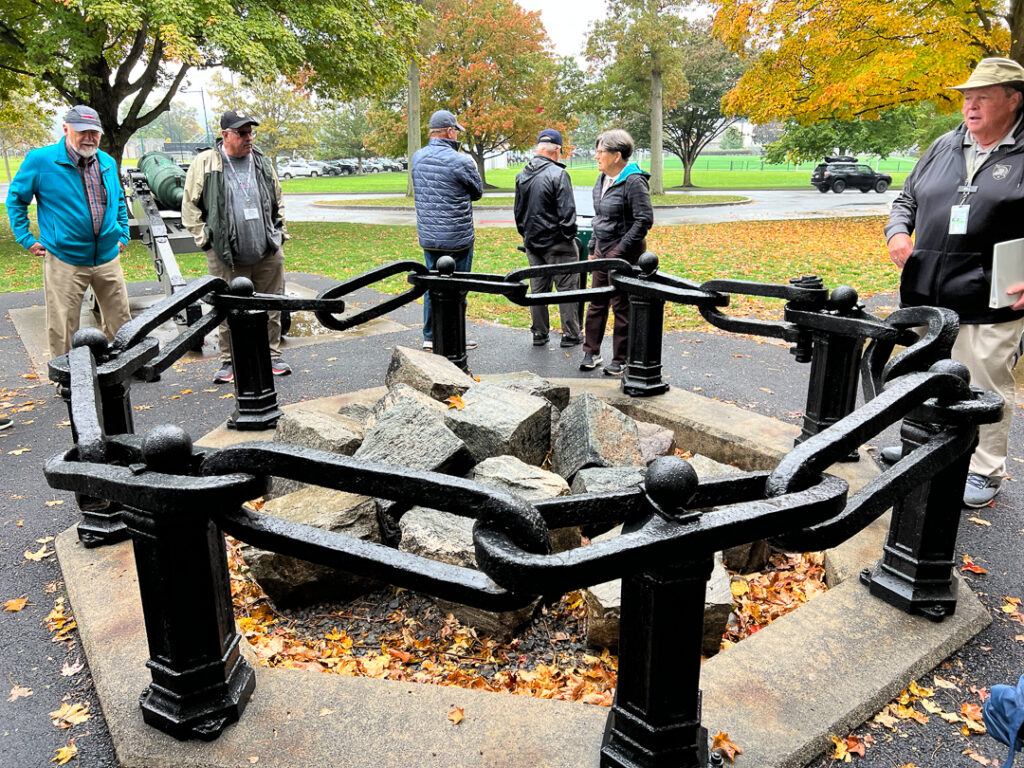 The area we were exploring is also called “Trophy Point” and is decorated by cannons captured by the Army over the years. 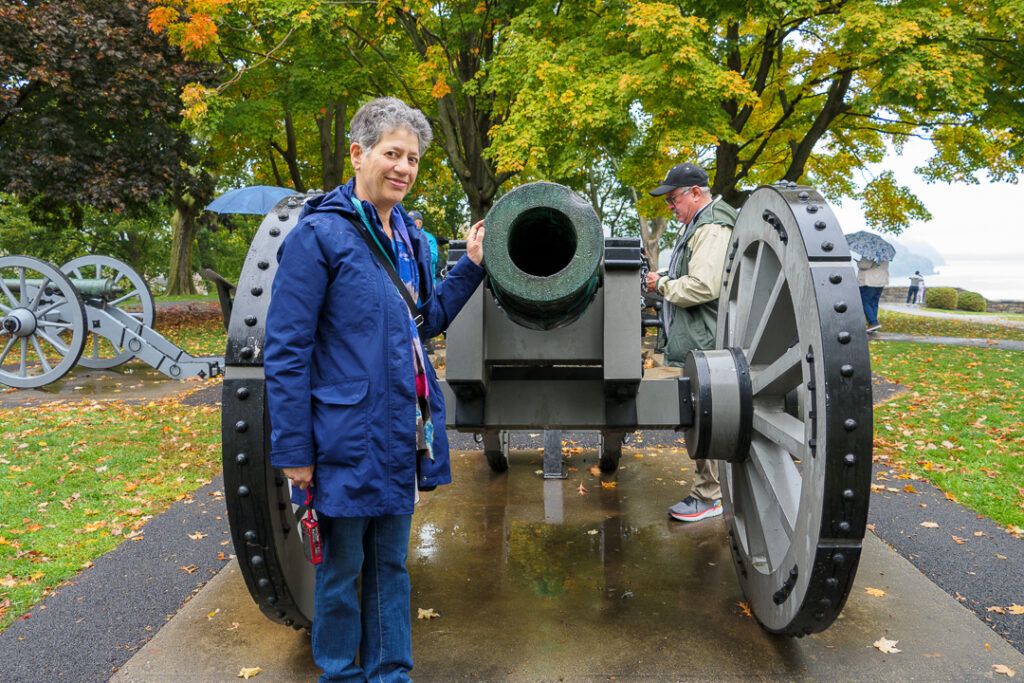 Trees were turning bright colors, making for a nice view, even on a rainy day. 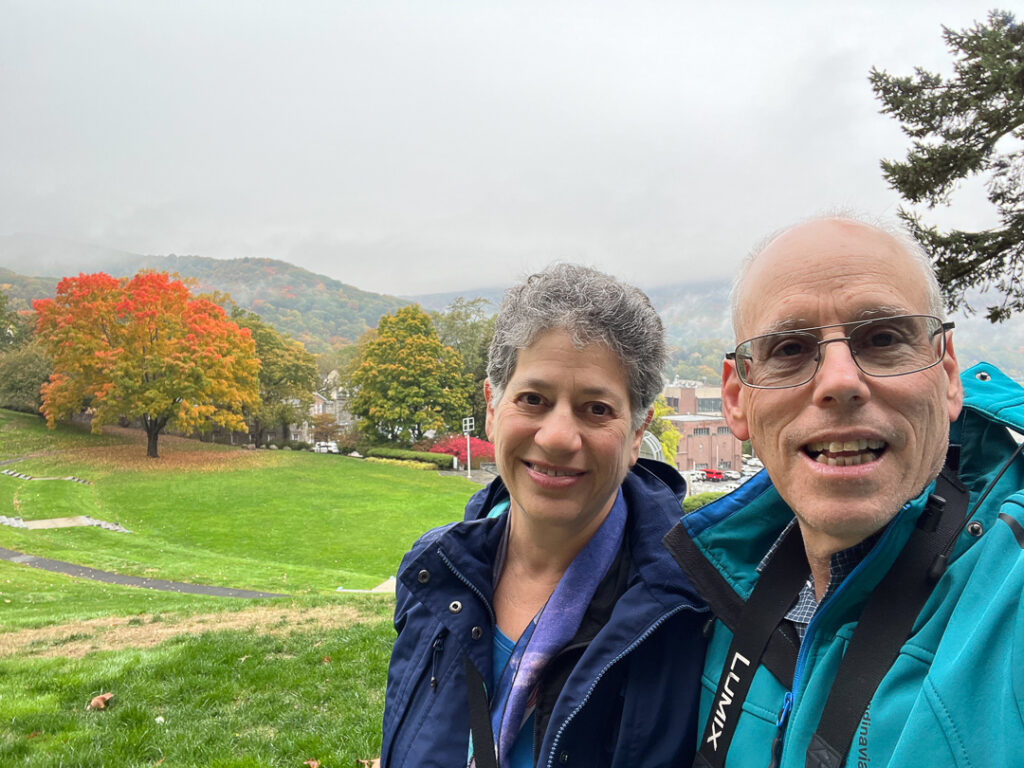 We didn’t get to see Bannerman’s Castle when we sailed past it last night, but it was clearly visible from West Point. 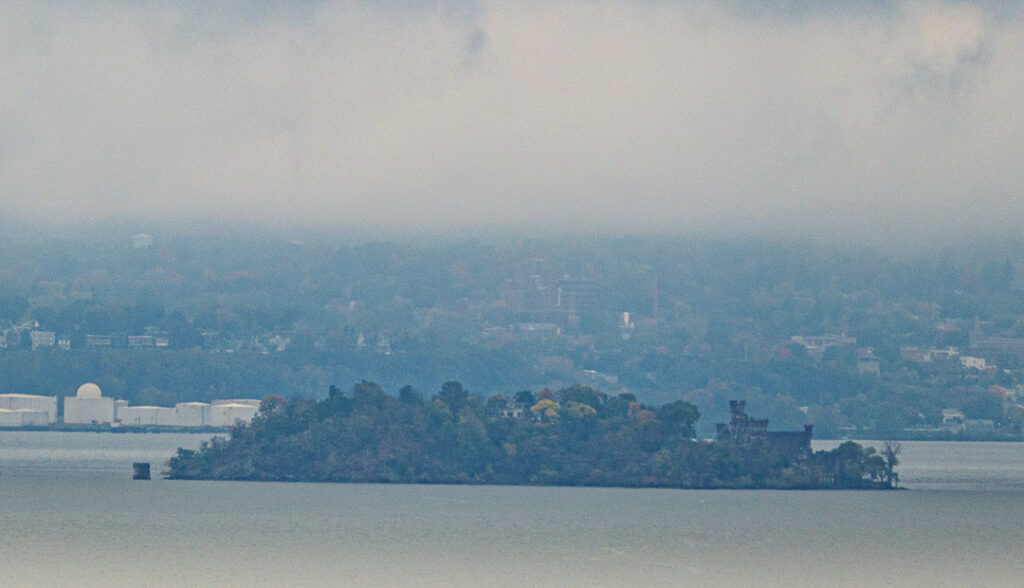 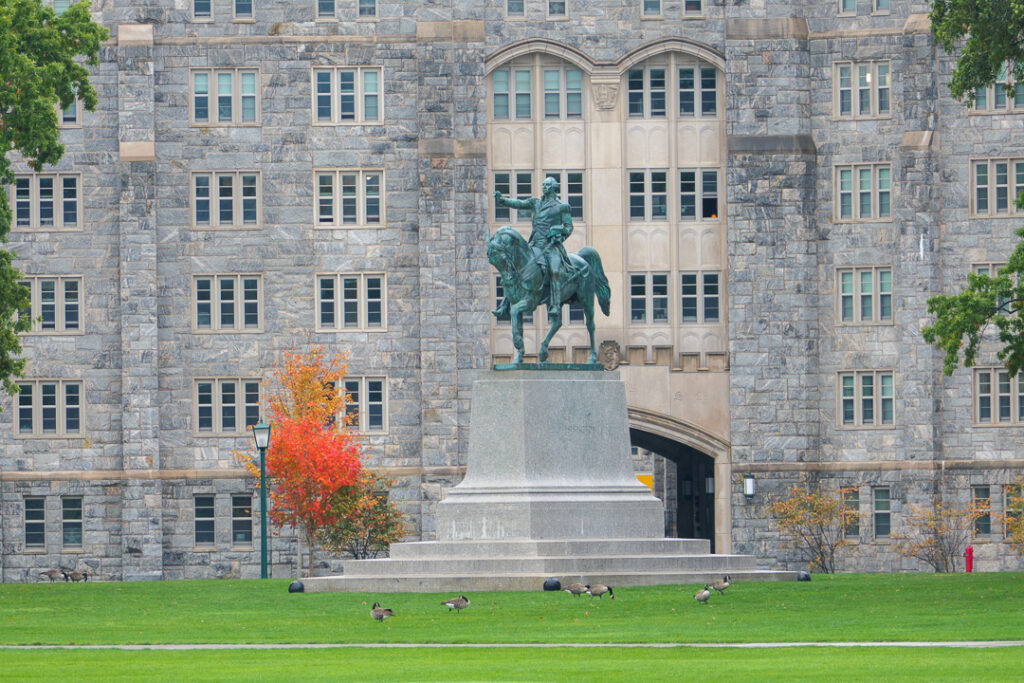 The trees around The Plain were turning beautiful colors. 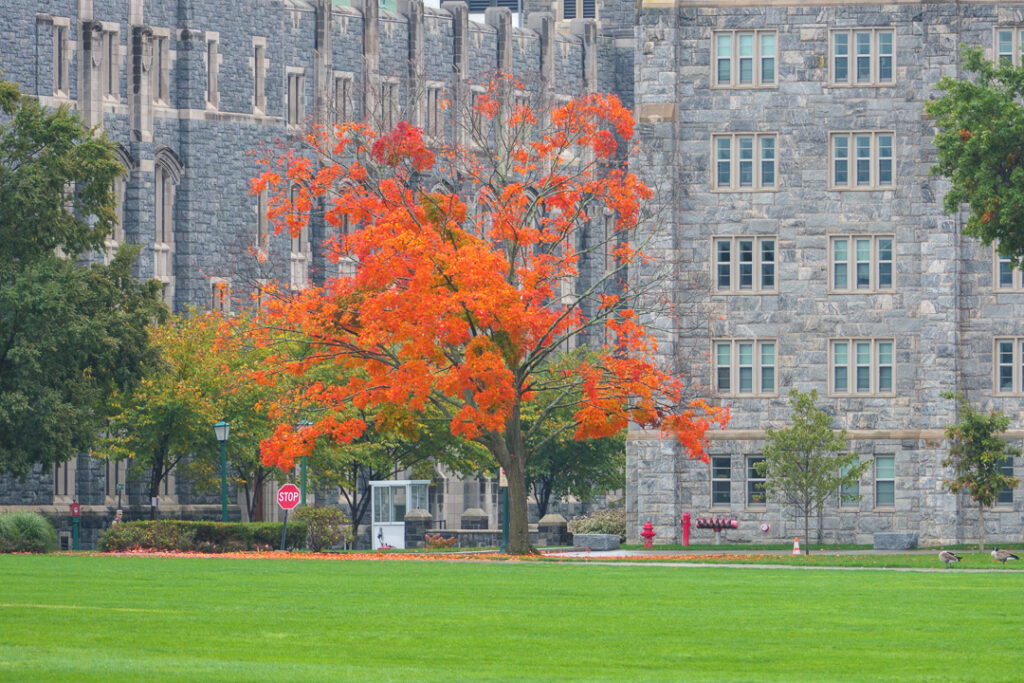 The Superintendent of the Academy lives in the oldest building on the Post, Superindentent’s Quarters. 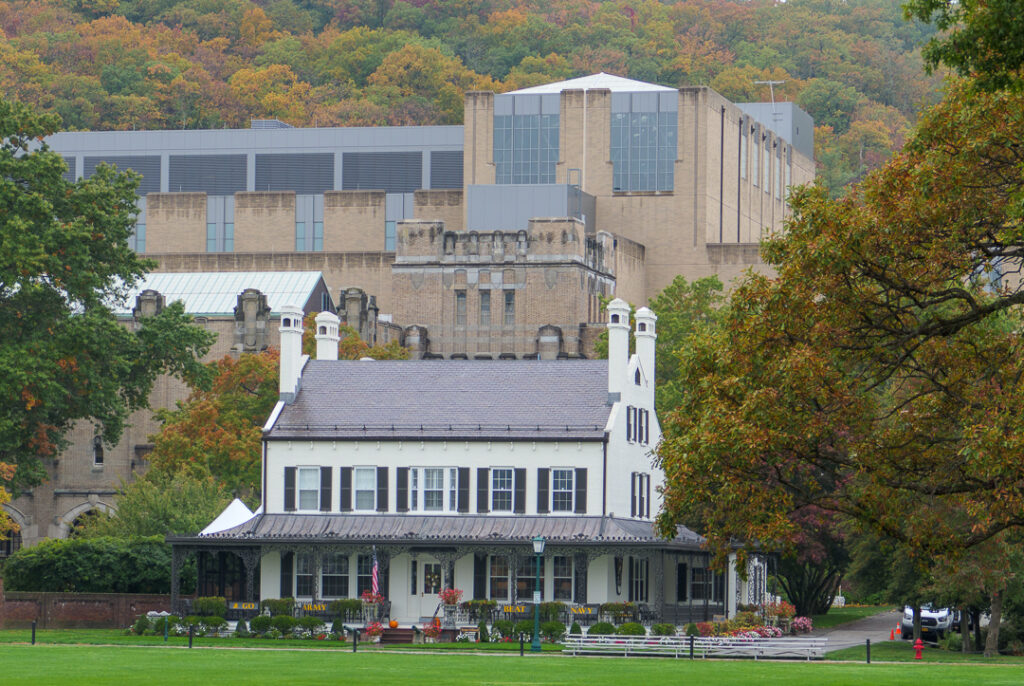 The two barracks are named after Douglas MacArthur and Dwight Eisenhower. 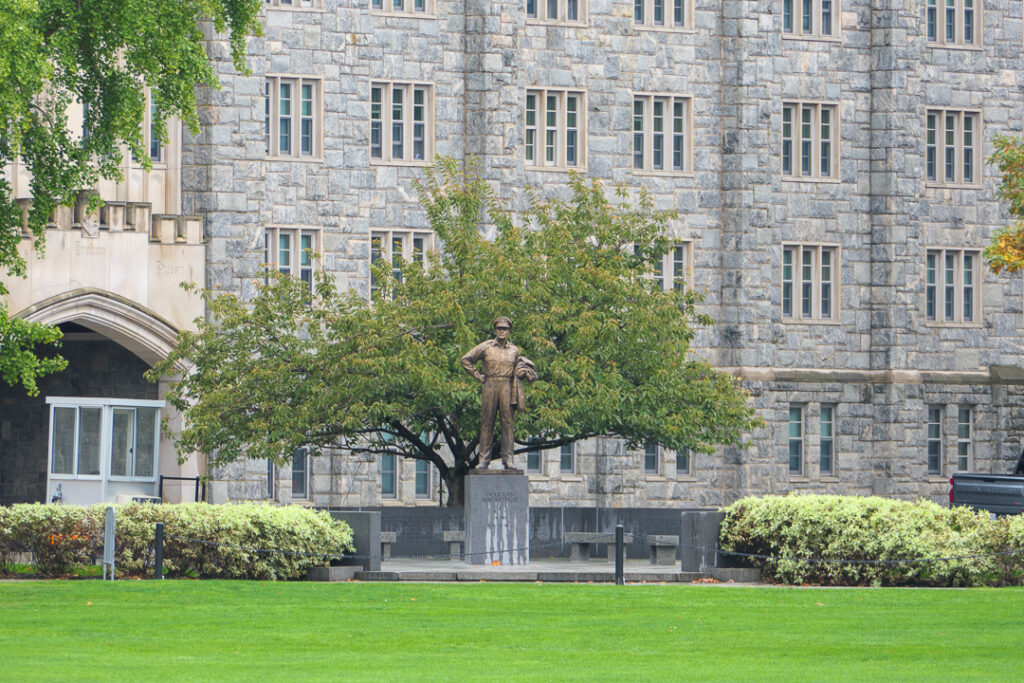 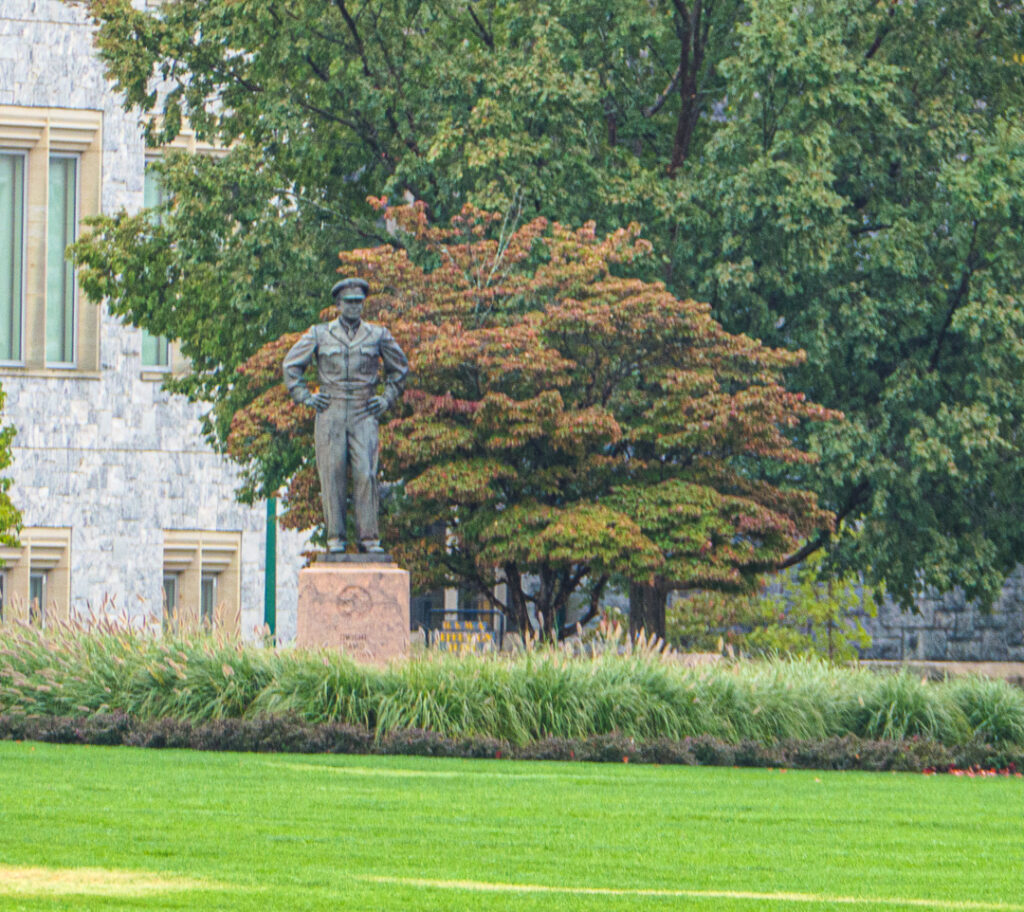 George Patton took five years to graduate from West Point – he claimed it was because he couldn’t find the library. His statue is in front of the library, but with his back turned on the building. 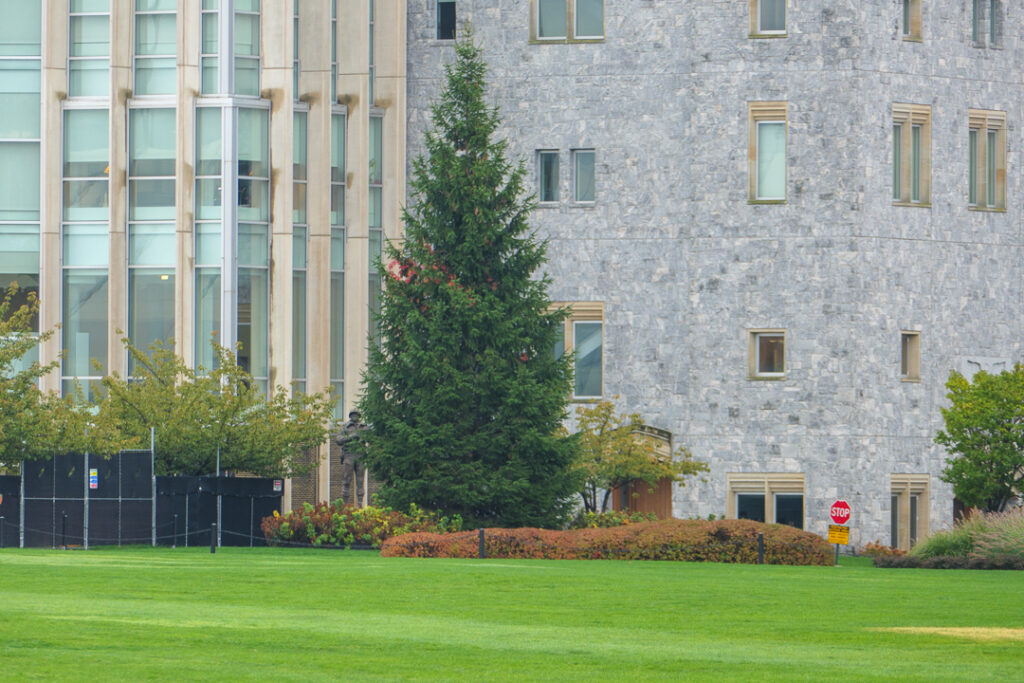 We had a few minutes at the Visitor Center, and then it was back on the bus for the drive back to the ship. I set my camera to 1/3200 of a second and tried to get some interesting photos. 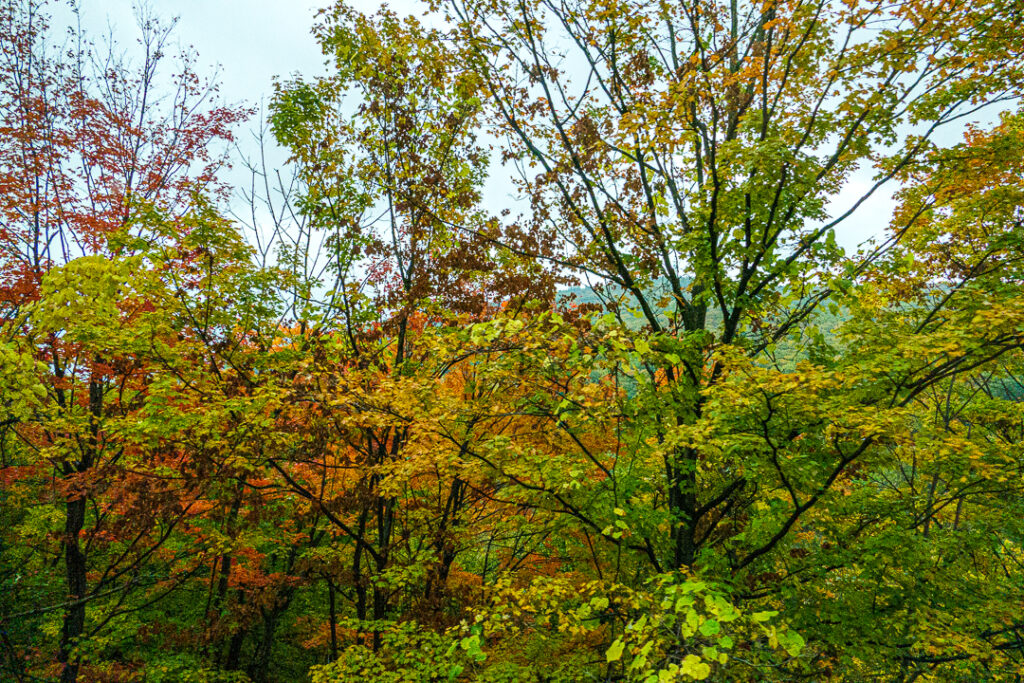 The road took us above West Point. 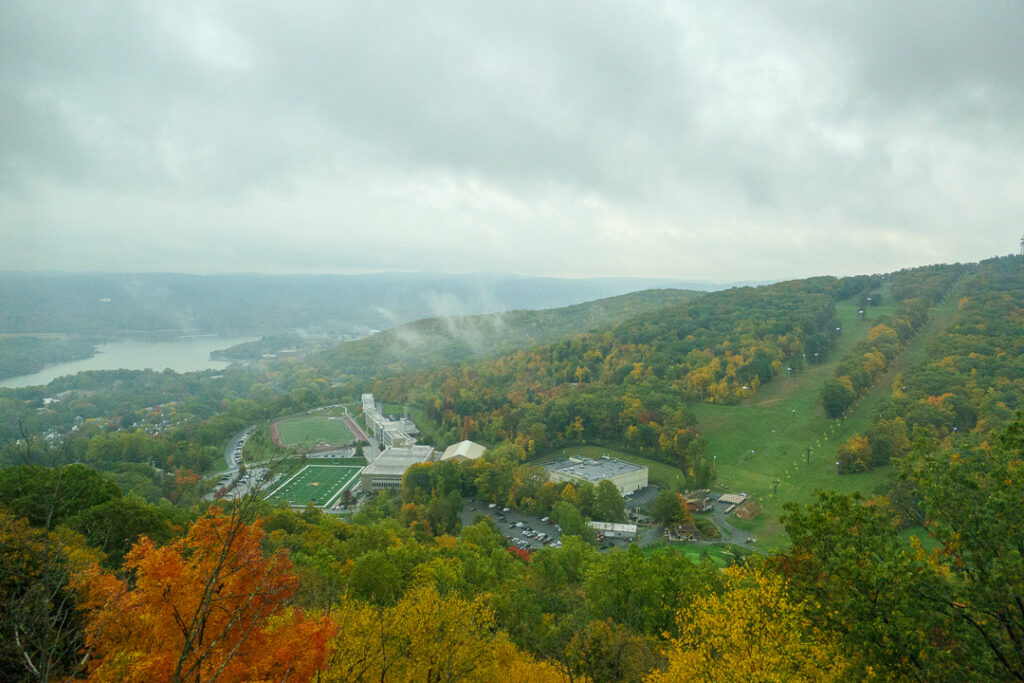 We returned to the ship just in time to see food for the next day or two being delivered. Like the army, a cruise ship travels on its stomach! 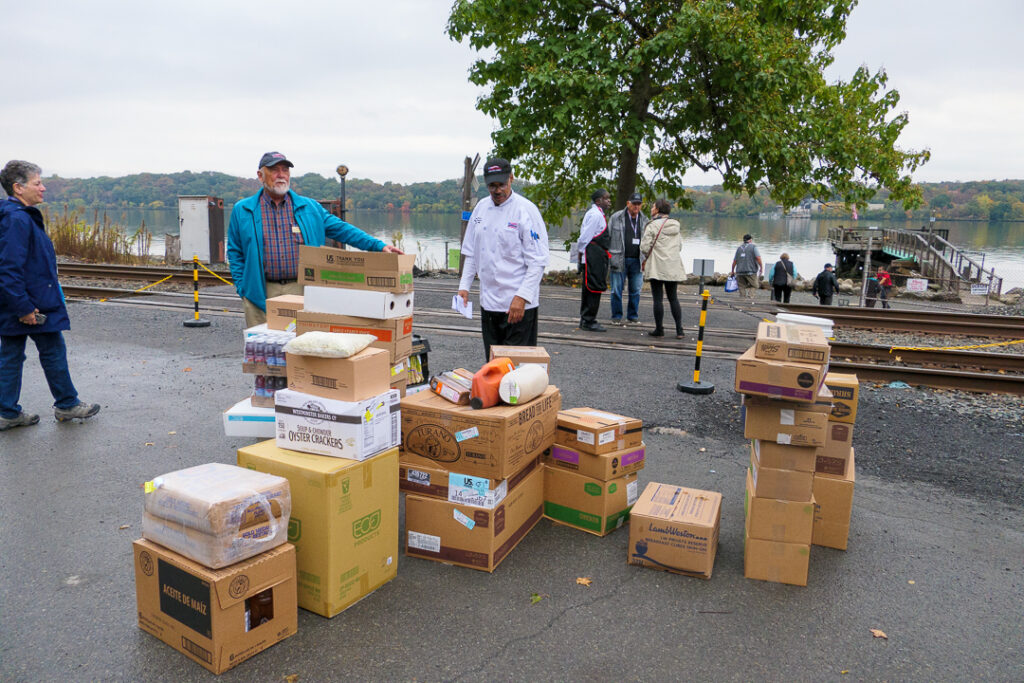 We had to cross busy railroad tracks to get back to the ship, but we were there between trains. There are no gates on the crossing, which surprised me. 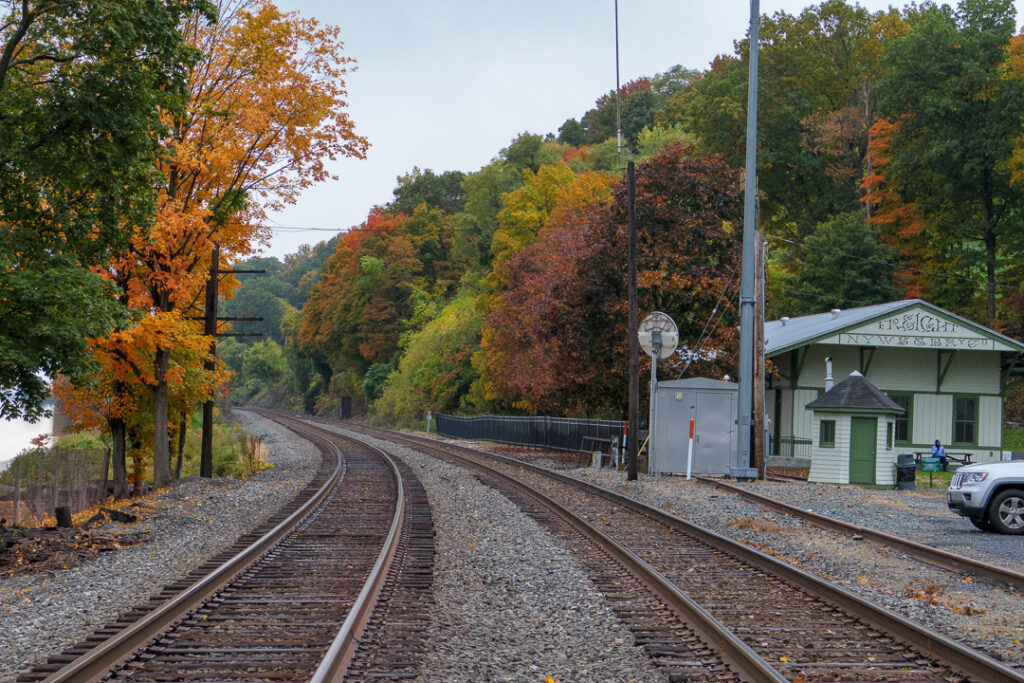 After lunch, Diane and I took a walk up to the town of Milton. 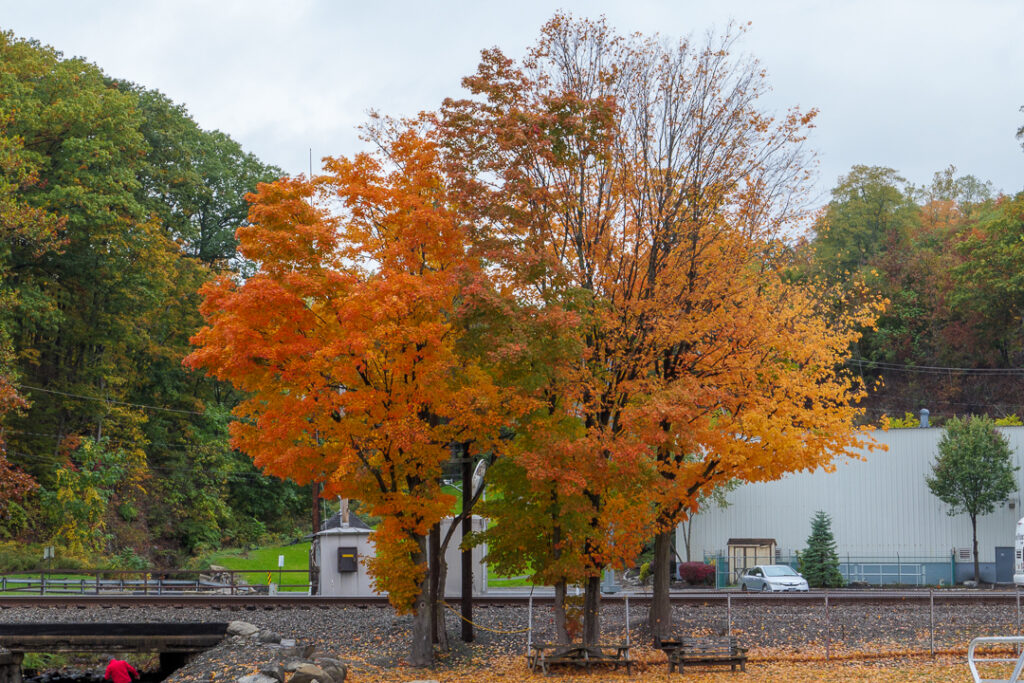 There was a pond (Marlboro Water) on the way with an interesting pattern of algae on it. 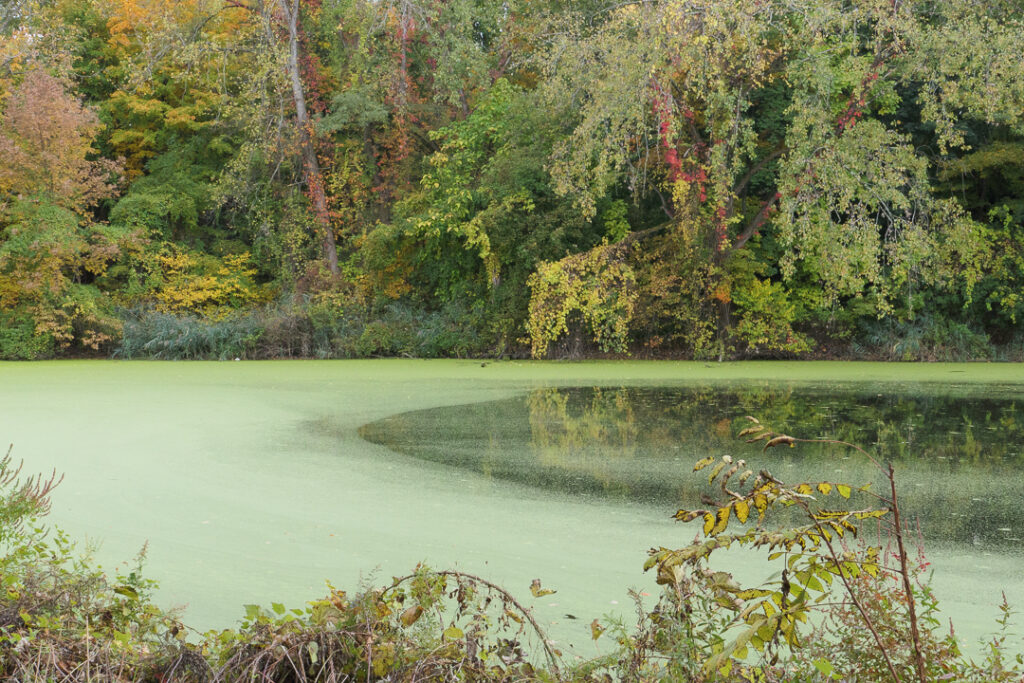 Milton itself is rather small, but there were a few nice trees to enjoy (and Diane found flowers to post). 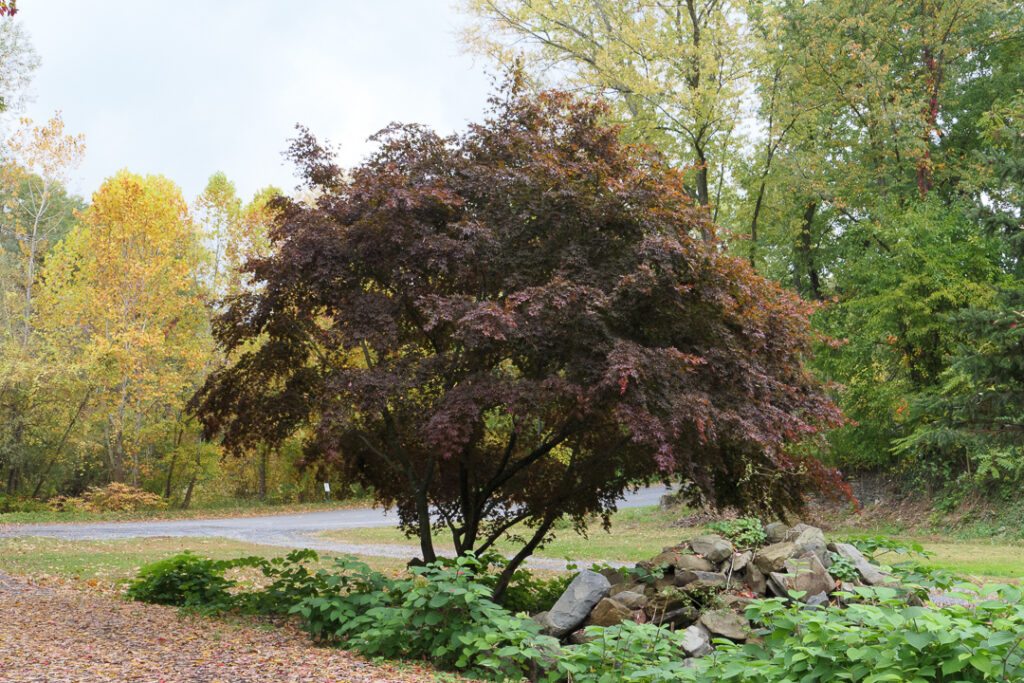 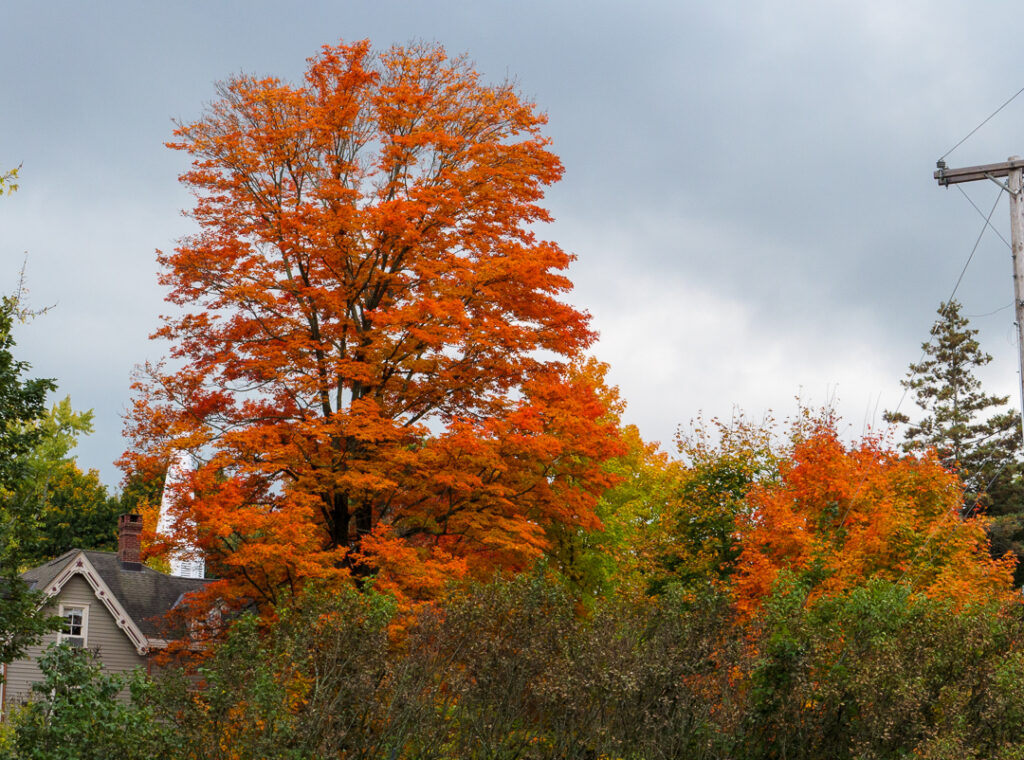 The streets leading to the town didn’t have sidewalks or much in the way of shoulders, so I was happy to find a real pedestrian path to take us down the last block or two. I didn’t expect to find a waterfall, but there it was! 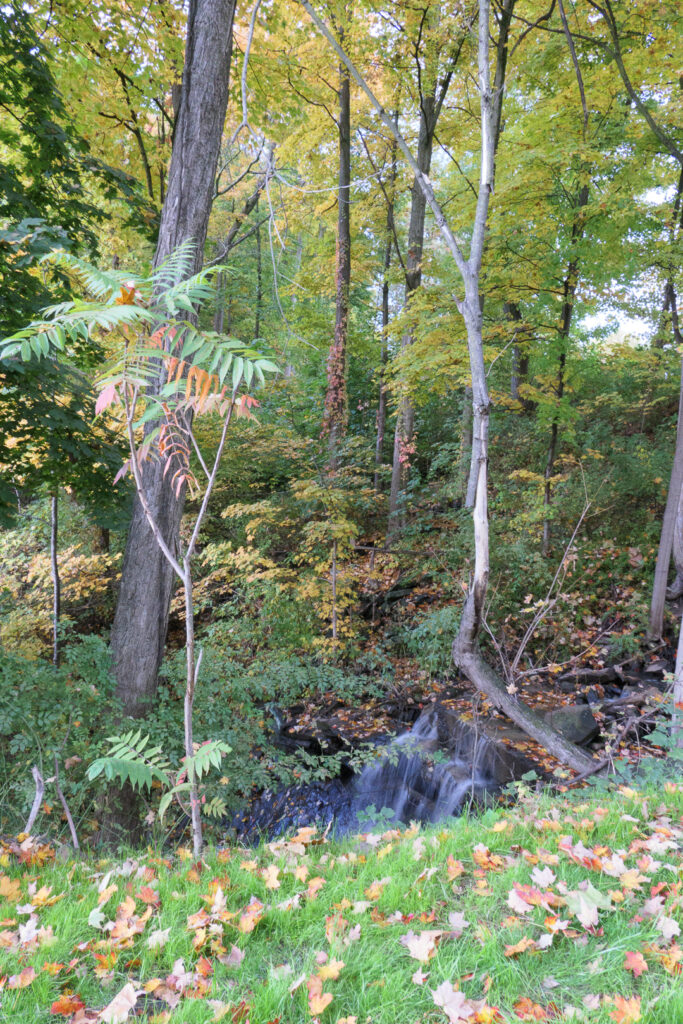 We got back to the ship just before the rain really started, in plenty of time for cocktail hour and dinner, followed by a magic show – you never know what to expect in the way of entertainment on a cruise!