Today, we paid the price for Wednesday’s 2-for-1 helicopter ride deal by going to our timeshare’s Owners’ Update presentation. We had no intention of buying more points, but I did want to find out about the changes from the Marriott Vacation Club/Vistana (Westin) merger. Our agent, John, described his role as “marketing”, and he took us through the entire merged portfolio and the options it gave us, none of which actually required us to spend more money.

So far, so good. Then he started explaining what we could do if we did spend money and buy more points, and then he brought in his sales manager to run some numbers. By this point, we were two hours into our 90-minute commitment, and I have to admit that I was considering the deal, especially with the incentives she dangled. Diane was less eager, and we decided to go back to our room and look at the Vistana website to see what the additional points would buy.

That gave me a chance to look at my email, where I found an email from Vistana with some details about the new program. I discovered that we were going to be put into the new program at the same level as we would have gotten by buying the points; I also discovered that I couldn’t find out how many new points it would cost us to take the trips we usually take to the timeshare. So we decided not to buy anything and went back to “check out”.

It took a while for the final person to come and talk to us, but that conversation was less than five minutes (of course there was one more offer, but it was easy to refuse).

We left the resort and finally had lunch at Lotus Garden in the nearby Princeville Center; both of us had the Ono Thai Curry, which was interesting, but not thrilling.

Diane suggested we go to the Kilauea Lighthouse. We’d tried to go on our previous Kauai visit in 2017, but it was closed. I went to the website and made the necessary reservation and we drove over.

Somehow, we hadn’t realized that the site wasn’t just the lighthouse; it was a wildlife refuge, too! We parked and walked up to the main viewing area – we were a few hundred yards from a large colony of red-footed boobies (a bird we’d barely seen in the Galapagos). 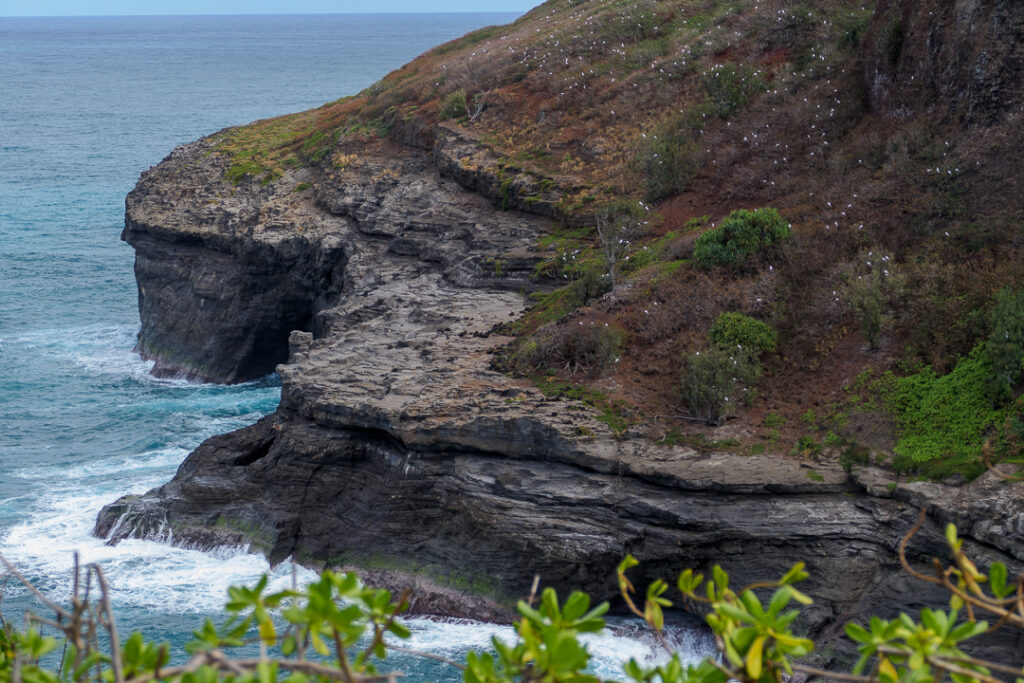 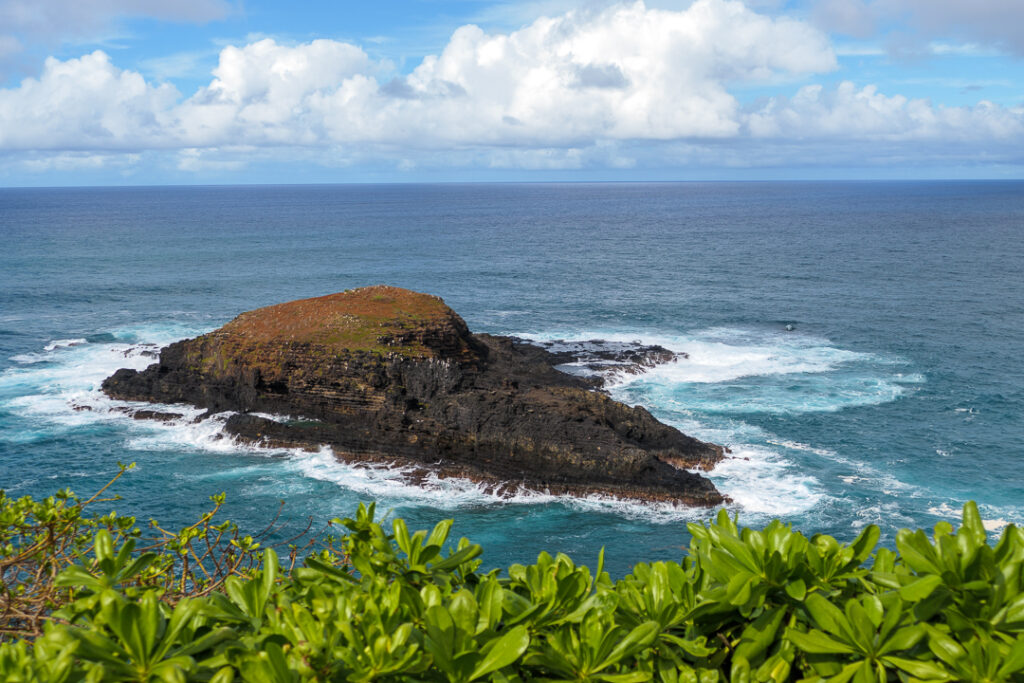 I spent a long time trying to get a clear photo of a Leysan Albatross (Mōlī); it was only after I got back to the room and looked at the photos that I discovered it was one of the first birds I’d photographed on the visit. 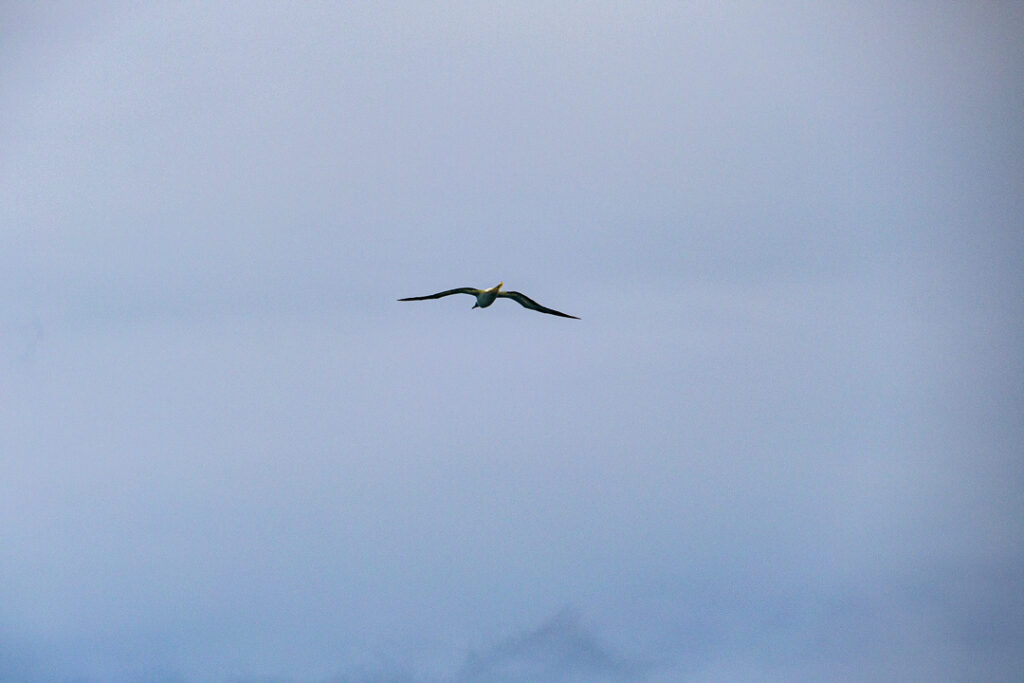 There were others, though, like the White-tailed Tropicbird (Koa’e kea). 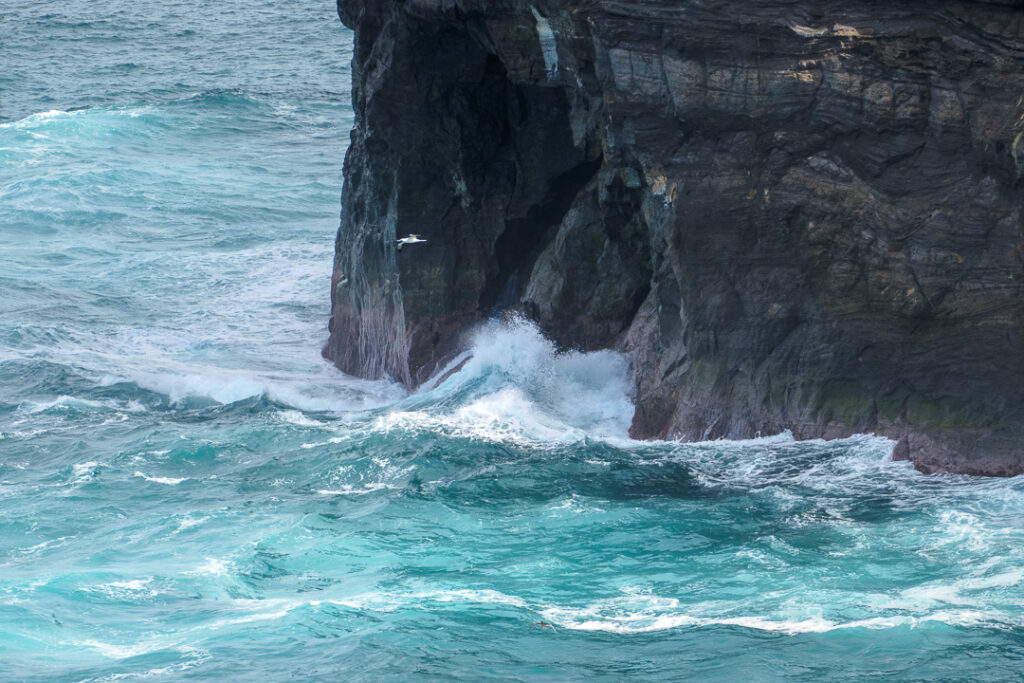 I finally got a fairly clear picture of the red-footed booby in flight! 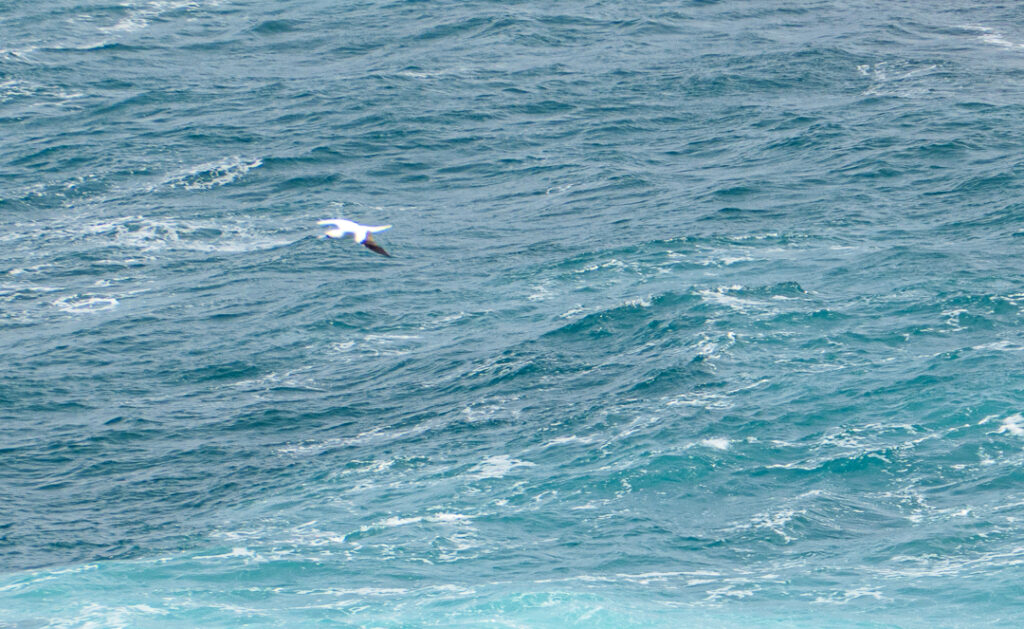 The Great Frigatebird was also familiar from our Galapagos adventure. 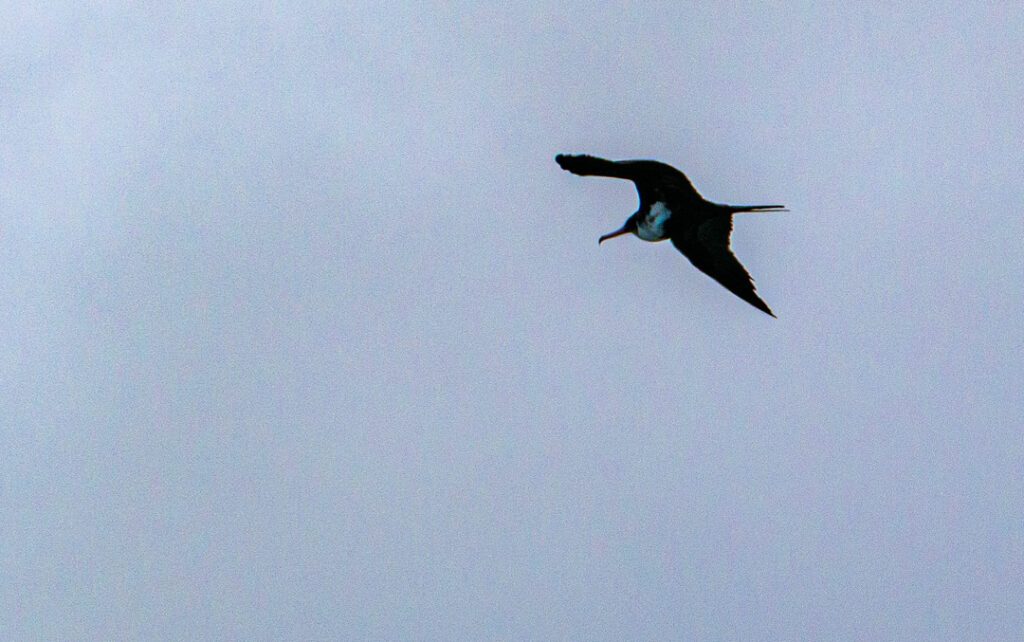 And here’s the lighthouse itself (they don’t allow visitors to enter any more). 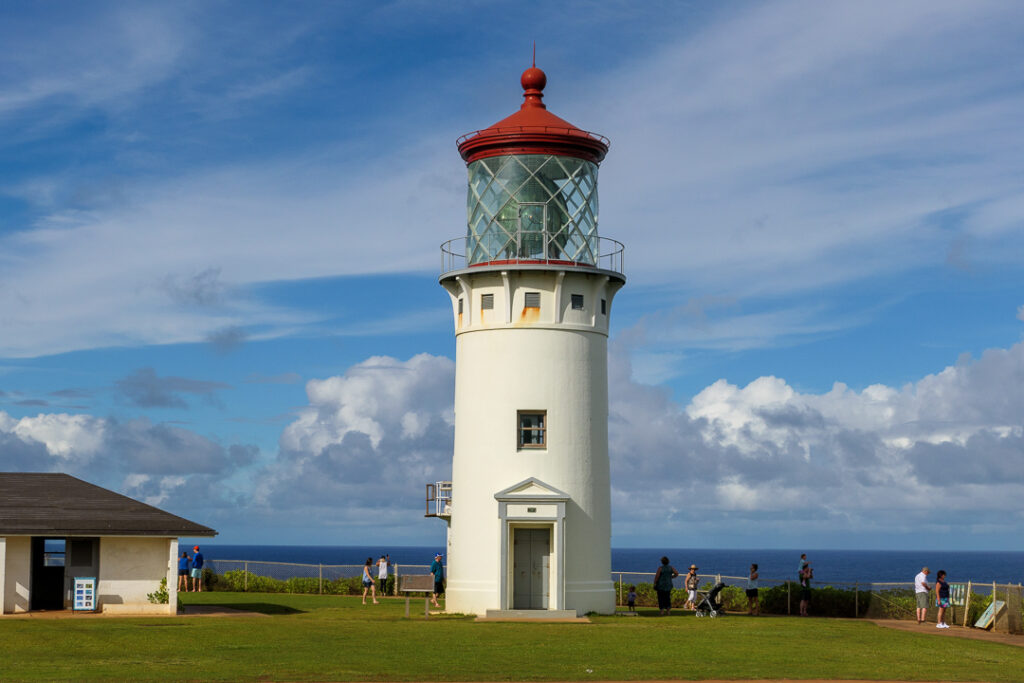 It was too early to go back to the resort, so we headed for another ocean viewpoint at Kaiakea Point, just north of Kapa’a. We parked and walked down to the Ke Ala Hele Makālae path and started going south. 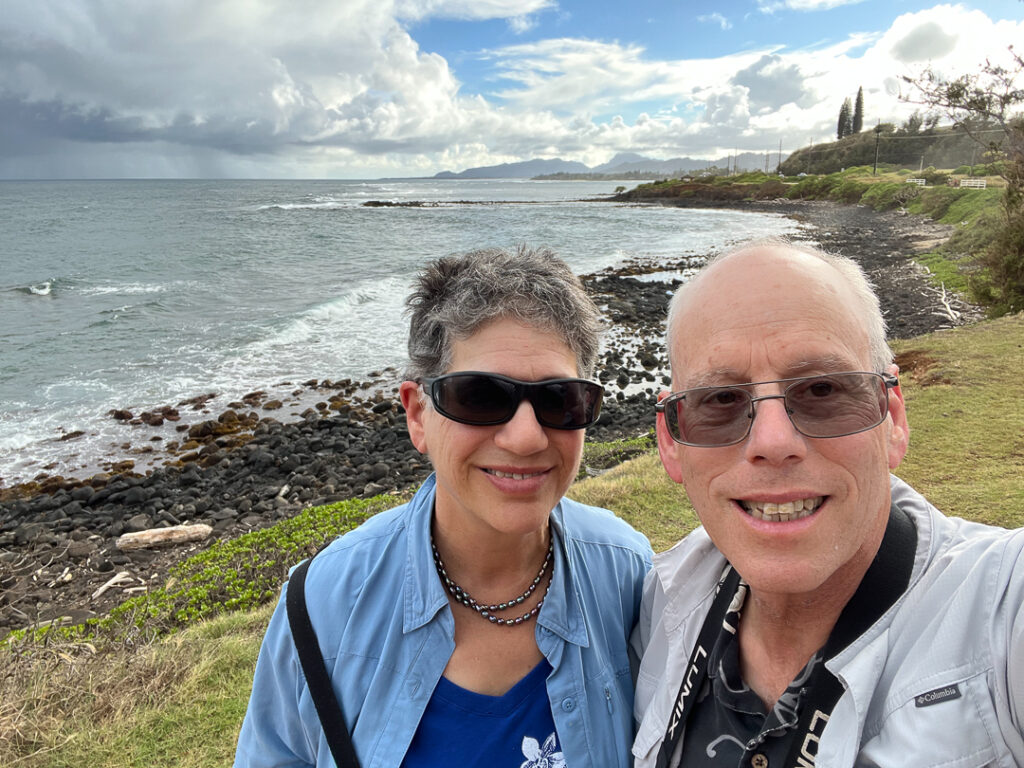 There was a beautiful rainbow to our North; I didn’t realize it at the time, but it was an omen. 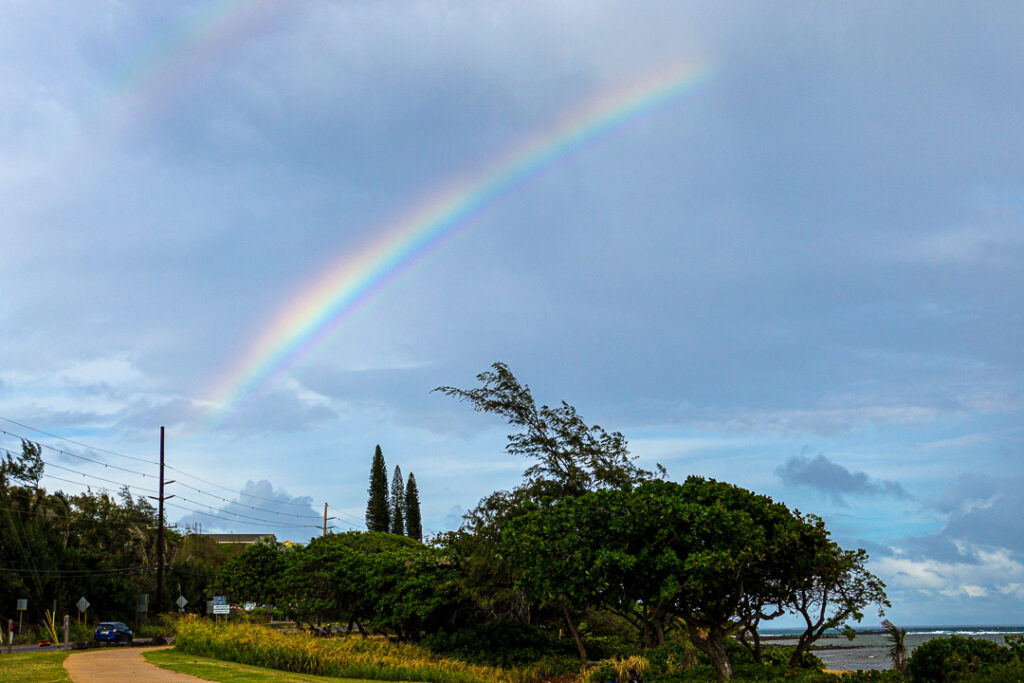 The path is supposed to be a good place to see dolphins and whales. We didn’t see any, but there was interesting vegetation like this Portia tree. 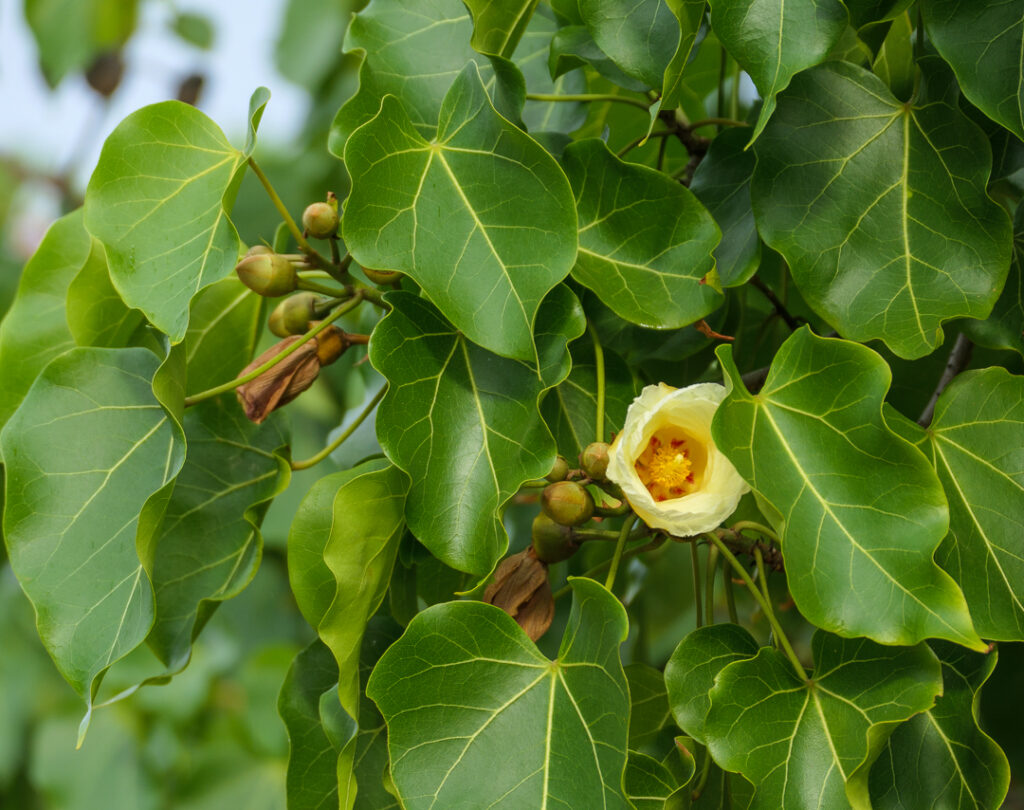 We turned around and started back – and the sky opened up. There was no thunder or lightning, so we took shelter under a path-side tree and waited for the squall to move on. 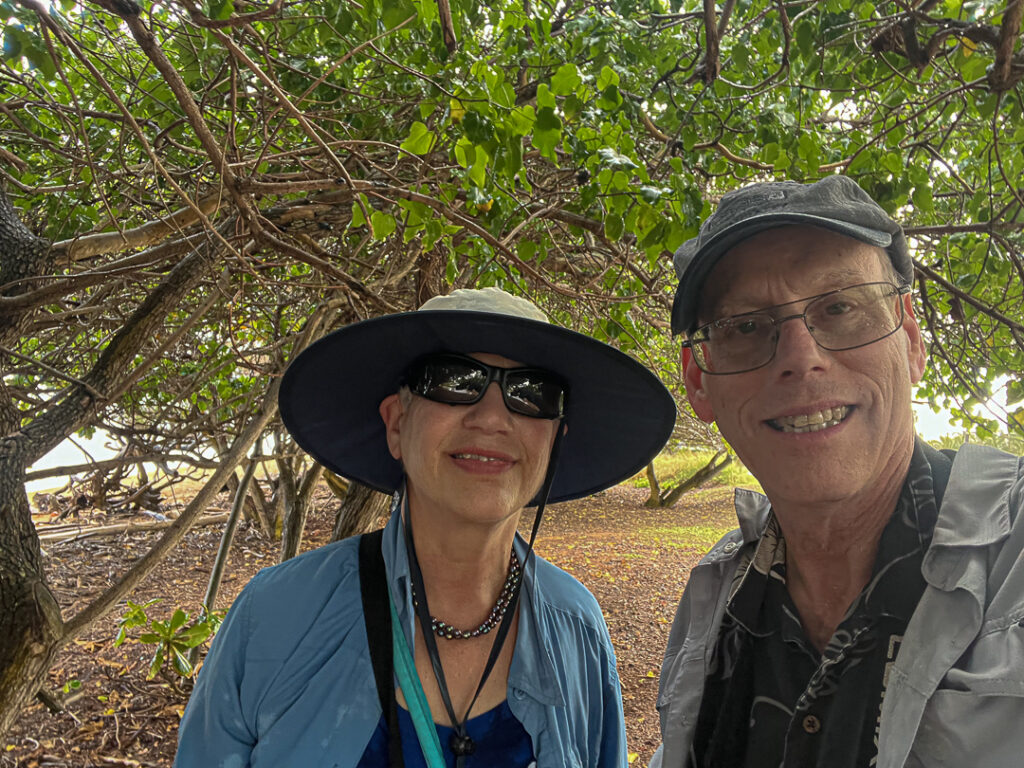 We drove back to Kilauea and had dinner at the Kilauea Fish Market: ahi wraps. It was very good.

We’re packed up (mostly) for our flight to Maui tomorrow morning. Onward!