I had a wonderful morning today, attending Simchat Torah services with the members of the South Hampshire Reform Jewish Congregation. They’re a small congregation without a permanent location (they use the Southampton Orthodox shul about twice a month and move around the area the rest of the time to be closer to the widely-scattered membership; today, they were at a member’s home on Allington Lane, about 10 miles from Winchester) and without a full-time rabbi or cantor (in fact, I found out today that no UK Reform congregation has a cantor). But they do own two Torah scrolls, and today, that was what counted. 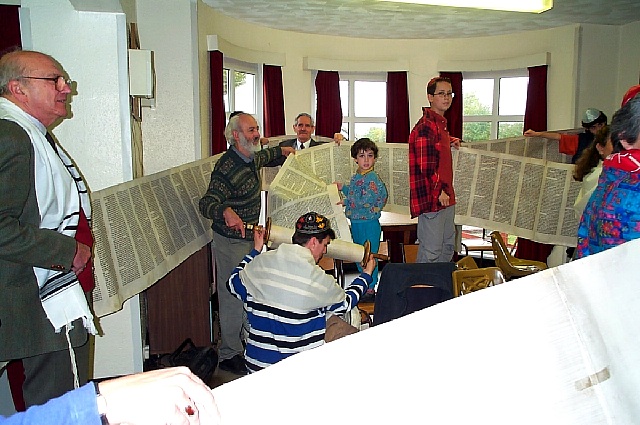 I’d actually never been to Simchat Torah morning services before — I’d been to the evening service, where the congregation dances with the Torah and processes around the sanctuary; it’s a fun evening. Morning services are a bit different, since we actually read the last and first parts of the Torah, and to do that, we unroll the complete scroll and literally wrap ourselves in the Torah. Today, in the small space available, we wrapped ourselves three layers deep in the Torah, which was a bit of a logistical challenge, especially when it came time to reroll the scroll. 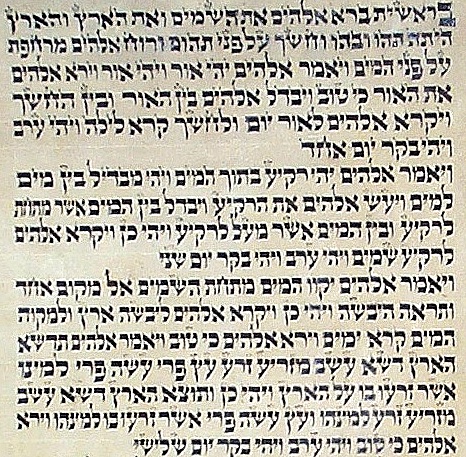 I was given the unexpected honor of being Katan Torah, that is, called to the Torah to “read” the final portion of Deuteronomy. I put “read” in quotes because, like many contemporary Jews, I can’t actually read the Torah itself (there are no vowels in the Torah, for one thing, as you can see above), but in practice, that’s not a problem — all I had to do was read the blessings before and after the Torah reading, and the service leader read the Torah (she’s an Israeli who now lives in England, so her Hebrew was more than up to the task). Some day, perhaps, I’ll take on the challenge of actually reading (chanting) a Torah portion at services at Shir Hadash — Diane does it once or twice a year — but so far, I have found being asked to give a drash (explanatory talk) on the portion (in English, of course) to be sufficiently daunting!

I took a lot more pictures while we were rerolling the scroll, so I’ve written a photoessay to help tell the story.

After leaving services, I started heading towards my hotel near Heathrow. We’d had a very light kiddush lunch at services, but I was hungry, so I stopped at a shopping center in Eastleigh for a more filling lunch. Parking was more of a challenge than I’d expected — fortunately, the parking lots here are “pay and display” rather than the “take a ticket” style which is common at home, so there’s no additional hassle leaving if you didn’t find a space. I succeeded in the second parking lot I tried; then I discovered that the one restaurant in the shopping center wasn’t very good. And I wasn’t successful at any of the other shopping I tried to do, either. But at least the parking was cheap.

Then I got on the M3 on my way to the hotel. All was well until I got off the highway, at which point I got thoroughly lost. I eventually found a place to park and called the hotel; they gave me directions, but unfortunately, their directions assumed I was starting from a different place than where I really was (I guess I told them the wrong thing!), and I got more lost; after a few more miles, I stumbled across a Sainsbury’s, parked, took out my map, and figured out where I was and where I had to be (I still have no idea how I got lost). Carrying a GPS is not very helpful if you have no way to cross-reference it to reality! But the UK mobile phone was quite useful; I’m glad I bought it.

But after the stop at Sainsbury’s, I was oriented, and found my way to the hotel in only a few more minutes. By this time, I was hungry again, but I didn’t want to eat in the hotel. So I walked out in search of the unknown. The first restaurant I saw was the McDonald’s in the Airport Bowl; I decided I could do better. A mile or so later, I found the next business district, which had an interesting-looking Indian restaurant…but it was closed. The Indian takeaway next door was open, though, and they had a couple of seats, so that’s where I ate (it was nice and spicy and filling, too!). Then I walked back to the hotel.

I spent the next 90 minutes trying to get connected to the network and failing. I had a hard time getting my computer plugged in to the wall, too — I still don’t have a UK power adapter, and the trick I used in Winchester to force the ground plug open enough to let an European plug go into the slot didn’t work here! The hotel found a UK adapter for me; I just have to remember to give it back to them, or I’ll be out 10 pounds (not a bad markup for something which costs about 2 pounds).

If you get to read this, I was successful at dialing in. That hasn’t been so easy this trip, either…half the time, the modems don’t successfully negotiate the connection.