I still haven’t had any time to do any real sight-seeing (and probably won’t; I thought tomorrow would be more or less free, but I now have meetings until the time I have to leave for the airport. sigh), but I did manage to take a couple of pictures.

The area I’m in is fairly near the harbor, and there are quite a few bars around — some of them have signs saying “US Navy Pub”, and my colleagues here advised avoiding them! I don’t actually have any problems avoiding bars in general (British pubs are an exception), so that was no hardship, but I did find the name of one bar here slightly interesting: 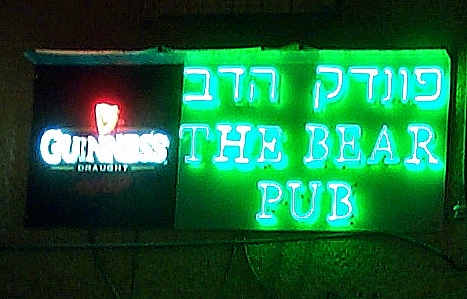 Other than the businesses which cater to sailors (there’s even a USO here), this is not a particularly touristy area; most of the shops have signs in Hebrew only. Last night, I had dinner at a Chinese restaurant — unfortunately, it wasn’t a Kosher Chinese restaurant (I know they exist, but I haven’t found one yet). But the chicken was just fine anyway.

The view from my room is very nice, including the Bahai headquarters:

I’ve just been told that they will be having a grand opening on May 22nd to show off the gardens, but I think I’ll have to miss it.

Last night was not a good one from the jet lag standpoint; I woke up at 4:15am and couldn’t get back to sleep. So if my writing appears incoherent, there’s a good reason! More later, perhaps….

After a very full day at IBM, two of my colleagues and I went to dinner at the Mongolia restaurant, about five minutes from my hotel. At home, Diane Reese introduced us to Su’s Mongolian BBQ, and now we go there several times a month. We like it because it’s fresh, fast, fun, and cheap — although the choices are somewhat limited (four meats, six vegetables, and a dozen sauces), that still gives more combinations than I’ll ever have a chance to try. And so, I had a mental model of what to expect at a Mongolian Barbecue place.

My model got jolted as soon as I saw the interior of the restaurant. Su’s is very plain — they’ve taken a huge step lately by putting up a few science-fictiony paintings; before that, the most interesting thing on their walls was the poster with the minimum wage notice. Mongolia is definitely not plain — it looked like a typical “yuppie” restaurant, with nice wrought iron on the walls, nice chairs, and lots of wood.

We sat down, and I got my next surprise — like Su’s, you pay one price for all you can eat, but unlike Su’s, it’s not all self-service. First, they brought out an assortment of fancy appetizers including ostrich liver and chicken sate, and even more surprisingly, bread (something I don’t think I’ve ever seen in a Chinese restaurant in the US). Everything was tasty (though I chose to skip the ostrich liver — I’ve never met a liver I liked yet), and then we were ready to go cook.

Again, Mongolia far outdid Su’s — instead of four meats and six vegetables, there were a dozen of each, and many, many sauces (plus fresh herbs). Fortunately, everything was labelled in English as well as in Hebrew, but there were still things I couldn’t recognize (what kind of herb is “aspodhel”?). But I didn’t need to try everything — nor did I want to — I just wanted a tasty meal, and I was pretty sure I could manage to create one.

At a Mongolian barbecue, you control what goes into your food (though trained professionals actually cook it), and so selection is critical. Just like Su’s, Mongolia provided some suggested recipes; unlike Su’s, they were printed in Hebrew. And the font was quite different — at home, I often see posters in English printed in a Hebrew-looking font; here, they printed Hebrew in a Chinese-looking font (I wish I had brought my camera!), not exactly designed for the non-native.

I could have asked my colleagues to help me follow the printed suggestions (in fact, they offered to do so), but what fun would that have been?

Instead, I decided to adlib. I stuck with what I knew for the first bowl (chicken as the meat, and spices and sauces which seemed familiar), and I quite enjoyed it (though I probably went a little heavy on the peanut sauce). I experimented more on the second bowl (turkey as the meat), and it wasn’t as successful — the sauce I concocted went better with the vegetables than with the meat, so I was a good boy and just ate my vegetables.

And then it was time to pay the bill, and I discovered the last big difference between Mongolia and Su’s. Su’s is inexpensive: $8 for all you can stand (if you’re a big eater, it can be quite a bargain). But in Israel, Chinese food is one of the fancier options, and Mongolia was no exception; my share of the bill came to a bit over 100 shekels (about $25), the most expensive meal I’d had in Haifa. But it was a nice change of pace, and I enjoyed the company at dinner (and I think they liked the food, too, though they did stick pretty closely to the suggestions).

I wonder if I can find a decent Mongolian barbecue restaurant in Paris this weekend?