Last night, I was up fairly late doing work (I wanted to take advantage of the overlap with the US business day), but finally was ready to go to bed just after midnight. I had had the TV on for background noise, and was flipping through the channels aimlessly before turning it off, but the program on Channel One caught my eye and I took my finger off the remote control.

What they were showing on screen was a passage from the Torah (probably from this week’s parasha, though I couldn’t tell), with a yod pointing to the words as they were being read, almost as if it were being done during services (almost — there were illustrations on the scroll, which is not the case with a real Torah).

After that, they went to a still shot of the words (in Hebrew, of course) “Lilah Tov m’Yerushaleim” (Good Night from Jerusalem), and I realized that they were about to sign off for the night. I was ready to turn off the set, but before I could, the screen changed again, showing an Israeli flag waving, with the Israeli National Anthem, Hatikvah, playing, and the words scrolling up the screen.

Much to my surprise, I found myself singing along, with tears forming in my eyes — and that’s something that never happens when I hear The Star-Spangled Banner.

I’d had much the same reaction two years ago when our tour group stopped at Herzl’s grave and we sang Hatikvah together (it was the first time I’d sung it since finishing Hebrew school, many years ago — they made us sing it there during every class, and once I learned to sing it well enough to get by, it bored me). I thought it was largely due to the intense environment — we’d just come from Yad Vashem (the Holocaust Museum), and we’d spent a couple of weeks touring Israel in a very Jewish environment, so I was clearly primed to react, and I thought no more about it.

But this time, it was just me, alone in my room on a business trip — hell, I’d just turned off my laptop after dealing with a day’s worth of e-mail, so I definitely shouldn’t have been affected.

But I was. Somehow, without noticing it, I’d turned into an ardent Zionist, and I felt truly at home, involved, and committed. Not committed to the extent that I have any plans to make aliyah (Diane will probably be relieved to know that!), but I certainly feel more than casually invested in what goes on in Israel, and I’m very interested in spending more time in Israel and visiting more frequently than I’ve done in the past — and that doesn’t just mean arranging more short business trips like this one (though I do think IBM has gotten significant value on my trips so far).

Watching TV can be dangerous.

When I originally planned this trip, it had three purposes. First, I was going to speak at the official opening of the Israel Office of the World-Wide Web Consortium. Second, I needed to meet with the team in Hursley, England, who will be hosting our internal WebAhead conference this fall (I’m the co-founder and permanent co-chair, but all the hard work gets done by the folks in Hursley — I just fly in, talk a lot, and visit pubs in the evening (that’s why we picked England for the conference in the first place: the beer is better there than at home)). And the third reason was to attend an internal meeting in Paris, where the people in the CIO’s office will be planning how IBM’s computing environment will evolve over the next year or so (my role there is simple; I’m a spy). Because the dates of the events in Paris and Israel were set by others, I found myself with a few spare days, and I decided to spend two of them at IBM Haifa and the weekend between events playing tourist in Paris.

Two weeks before I was to leave, terrorists set off a bomb in Netanya (between Haifa and Tel Aviv, on the coast, well inside the original boundaries of the State of Israel). And the W3C folks thought it might be better to postpone the grand opening for a few months. And I nearly cancelled my trip — or at least the Israel part of it — but after talking with my hosts in Haifa, I decided that they’d put together an interesting agenda, and that I wanted to come if it was at all possible.

So I kept a close eye on the news (mostly the Jerusalem Post, but also other Israeli English-language Web pages and the BBC). And I kept talking with people who were well-connected to Israel, like the Rabbi and her husband (who’s a physicist and makes frequent visits to his colleagues in Israel). And made sure my manager was still willing to send me. And, of course, I stayed in touch with my hosts in Haifa — I was using instant messaging with them right up until the car service came to pick me up at home last Sunday. Everyone said that I should be OK, and Diane didn’t seem too worried, so off I went…nervously.

Then I landed at Ben-Gurion Airport, and I noticed that all of the Israelis I talked with were proceeding with life as usual. Sure, there were incidents reported in the paper and on the news — and the “situation” (as everyone calls it) was always the lead story — but for the most part, it seemed to have much less effect on the people I was with than the energy situation in California has had on my family (and so far, we haven’t been hit with a blackout). People were shopping, taking buses, going to work, planning vacations…business as usual. And pretty soon, the situation receeded in my mind, too.

But while I was there, I didn’t feel that terrorists were a significant danger. Israeli drivers, on the other hand, scared me every time I went outside — and especially when I was on the road (this trip, I chose not to rent a car, so I didn’t even have the illusion of control). The most popular bumper sticker in Israel isn’t political — it’s a small sticker on the back of about half the cars which reads “Sh’mor Mirchak” (keep your distance). It doesn’t work, of course — and there are far more deaths in Israel from traffic accidents than from terrorism.

At the airport today, I had to go through Israeli security. I arrived in plenty of time, and even had a letter from IBM Haifa confirming that I’d been specifically invited to meet visit them so that I could show it to the agent. Clearing security only took about five minutes, including opening my bags to verify that everything in there was mine (I had left them in a semi-public area today, so I couldn’t say that they’d been under my control the whole time), and I didn’t even have to use my letter. I suspect having other Israeli stamps in my passport helps; flying Business Class probably didn’t make the quiz any less thorough (I wish I knew why they asked whether I have any family in Israel), but it did mean I didn’t have to wait in a very long line for my turn.

And now I’m on my way to England, where foot-and-mouth disease is the big story, and supposedly the entire country is depressed by it. I wonder if that’s exaggerated, too.

One advantage of clearing security so quickly was not having to rush to make the plane; instead, I walked back outside to enjoy the good weather for a few minutes. I even had time enough to cross the street and look at the Dali Menorah outside Arrivals: 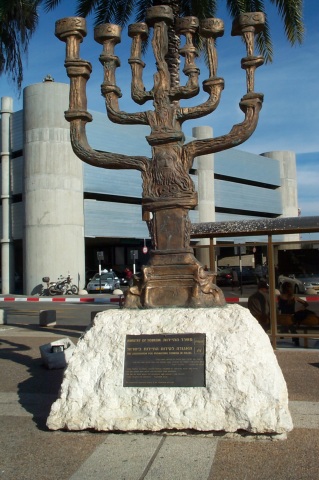 While I was taking my pictures, some other Americans walked up, and we started talking — they were just arriving to start a ten-day tour (since they were planning to spend time in Tiberias and mentioned the Sea of Galilee as a special place, I doubt they were with their synagogue) and were worried about terrorism. I told them that I’d felt safe on that score while I was there — but to watch out for the drivers. Perhaps I would have been more effective at setting their minds at ease without making that last remark!

And here I am at the lovely Heathrow Marriott

I upheld my tradition of getting lost on my way here, but this time I recovered within only a couple of minutes (I think the Hertz person gave me bad directions) and had hardly any trouble thereafter. I may have to switch to automatic cars, though; I’m way out of practice on shifting and clutching.

Tomorrow, it’s off to Hursley. But for now, time to face a day’s worth of e-mail. Oh, boy!