…and that’s where I’m typing this entry. Pardon any incoherencies; I’m trying to stay awake until a decent hour, but it’s not clear my brain is playing along.

At any rate, I woke up at 7am Hong Kong time, giving me plenty of time to pack, eat, and check out before taking the 9:30 airport shuttle to make my 11:55am plane. Oh, yes, and to upload pictures from yesterday — my dial-up connection died last night while I was in the process of sending up my pictures, and I decided to take the hint and go to bed.

Sure enough, the shuttle arrived promptly at 9:30, and we drove east to pick up passengers at the City Garden hotel, about 15 minutes away through heavy traffic. And then the bus turned around and drove to the airport, passing right by my hotel on its way; I can’t figure out why they didn’t start with the City Garden instead of sending us on the loop-the-loop, but the trip did let me make one more shot at getting photos, only one of which panned out — this is the Causeway Bay Typhoon Shelter. I wonder what it looks like when there’s a typhoon if it’s this crowded normally! 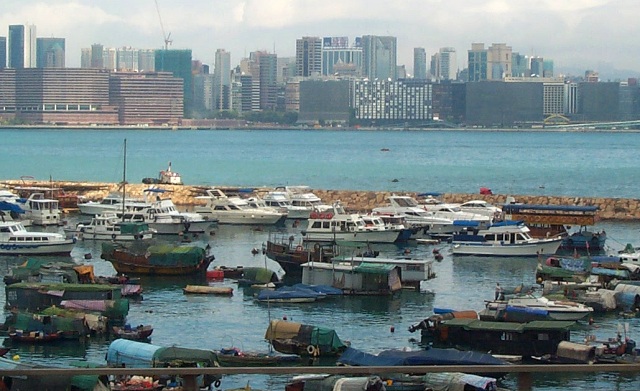 We reached the airport at 10:30; I checked in, got rid of my last HK$70 (I had saved HK$50 for departure tax, but United rolls it into the fare; apparently some airlines don’t), and took the golf cart to the First Class Lounge, where I had a quick snack while waiting for flight 806 to be called. We ran a little late, which gave me enough time to catch my breath and relax — next time, I won’t cut the trip to the airport so short.

This time, the plane was equipped with the United Suite in First Class, and I hoped to get some sleep on the flight home. But, even though the seat (5F) did open up so that I could lie down on a flat surface, I didn’t find it all that comfortable; it was plenty long, but not wide enough for me to have a good place to put my hands and arms. Despite that, I’d upgrade again — and I might sleep better on a flight which leaves later in the day, such as flights from California to Europe. Trying to go to sleep just nine hours after waking up is not easy for me, though my seatmate seemed not to have any problem sleeping. I did sleep some, though, but gave up the attempt about 8 hours into the flight.

Just before they closed the door, two women came into first class carrying young babies (I later found out the babies were eight and three months old). One of them took the seat across the aisle from mine, and I have to admit that I wasn’t happy about the idea — I was afraid that the baby would cry the entire flight (not without reason — unbeknownst to us, Jeffrey had a cold when we took him on his first flight…you can guess the rest). But that didn’t happen — the babies were amazingly quiet (the eight-month-old made a little noise once or twice; I don’t think I heard anything from the three-month-old, who was closer to me). About the only disturbance I noticed happened when the women took the babies on a walk into the galley and the flight attendants oohed and aahed — but that was no noisier than when an adult passenger went back to the galley and asked for something to eat.

I forgot to take a menu, so I don’t remember the wines or any of the entrees other than the one I had (filet mignon, which was tasty). Breakfast was more substantial than the second meal on the flight to Hong Kong, but nothing outstanding. They did have Godiva chocolates; the purser (who’d been on the flight I took to HKG last month) told me that they were carrying them outbound from Hong Kong until the supply ran out and suggested I write UA to complain.

Flight time was just under 12 hours, and I was out of Customs 30 minutes after wheels down. The car service was waiting for me, and I was home about an hour later; I’m now waiting for everyone to come home. School should be out in a few minutes, and I suspect Jeffrey will want to see his Game Boy sooner rather than later!

It’s hot here — but much drier than Hong Kong. I took a walk at lunchtime to get some sunshine, and came back only slightly damp; in Hong Kong, I was soaked by the time I’d walked half a block. And there were long stretches of my walk (through a populous suburb) when I didn’t see any other people; that never happened in Hong Kong! And finally, the air here smells of roses and citrus; that wasn’t the case in the urban areas of Hong Kong.

It’s good to be home.