This afternoon, I gave a talk on “The Emergence of Service Science” to the “Introduction to E-Services” class at Peking University. The talk went well, I think — their English was far better than my Mandarin. I spent the morning with the professor’s grad student (who is also a full-time IBMer at the China Software Development Lab) — he played tour guide for me and took me to Dashilar (shopping, though I didn’t buy anything, and my first sight of Beijing’s hutongs), Tienanmen Square (where I snagged my first Chinese geocache), and the Forbidden City (where I snagged my second Chinese geocache). 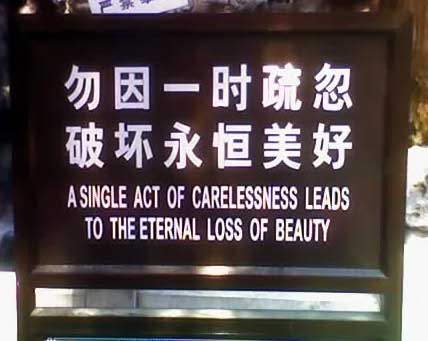 I took a lot of pictures, which I’ll edit and post some time when I’m more awake (hmmm, I think I said that yesterday, too). I would have had even more, but I forgot to charge my camera after yesterday’s all-day expedition, and my battery died soon after entering the Forbidden City. But I had a plan B — my cellphone camera; unfortunately, the lens is dirty and the pictures didn’t come out well, hence the shot of the sign above (which I took with the cellphone — it was the best shot I took with it, too).

Dinner tonight was interesting; two of my colleagues and I went to Ding Dine Xiang, a Mongolian hotpot place. Mongolian hotpot is almost exactly the same as shabu shabu, so it wasn’t as exotic as we had expected when we picked the place. Ordering, on the other hand, was a bit of an adventure, because the place didn’t have an English menu. Our waitress was able to tell us that they had lamb and beef (which was fine with us), but that was as much as we were able to communicate — but then she called the manager and he spoke enough English for us to know what we were getting. I think the waitress was much more flustered by the inability to communicate than we were. And the food was excellent (especially when dipped in sesame sauce). I’d happily go back on a future trip to Beijing.