We left the ship just before 8am. 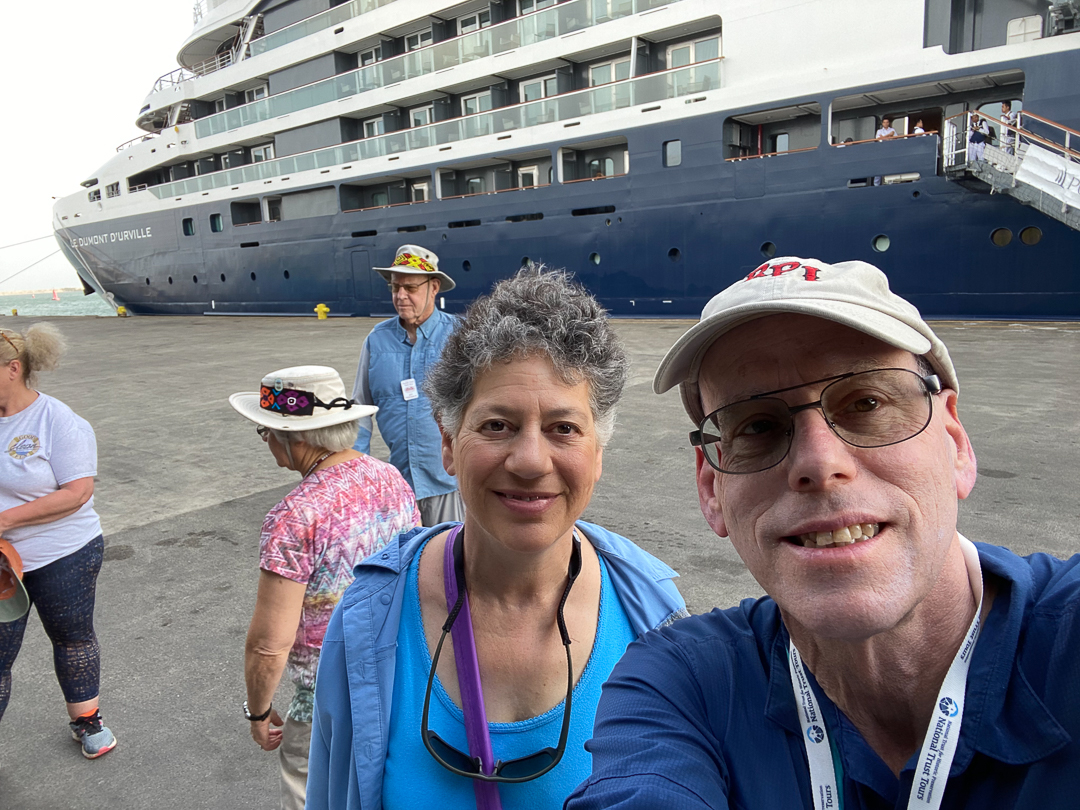 Disembarkation was easy – though they did have dogs sniff all of our luggage! We boarded a bus and took a quick driving tour through ColÃ³n en route to the Panama Canal Expansion Visitors Center. There wasn’t much to see in ColÃ³n, but our path did take us by the Monument to the Founders of ColÃ³n, who were Americans working on the Panama Railway. 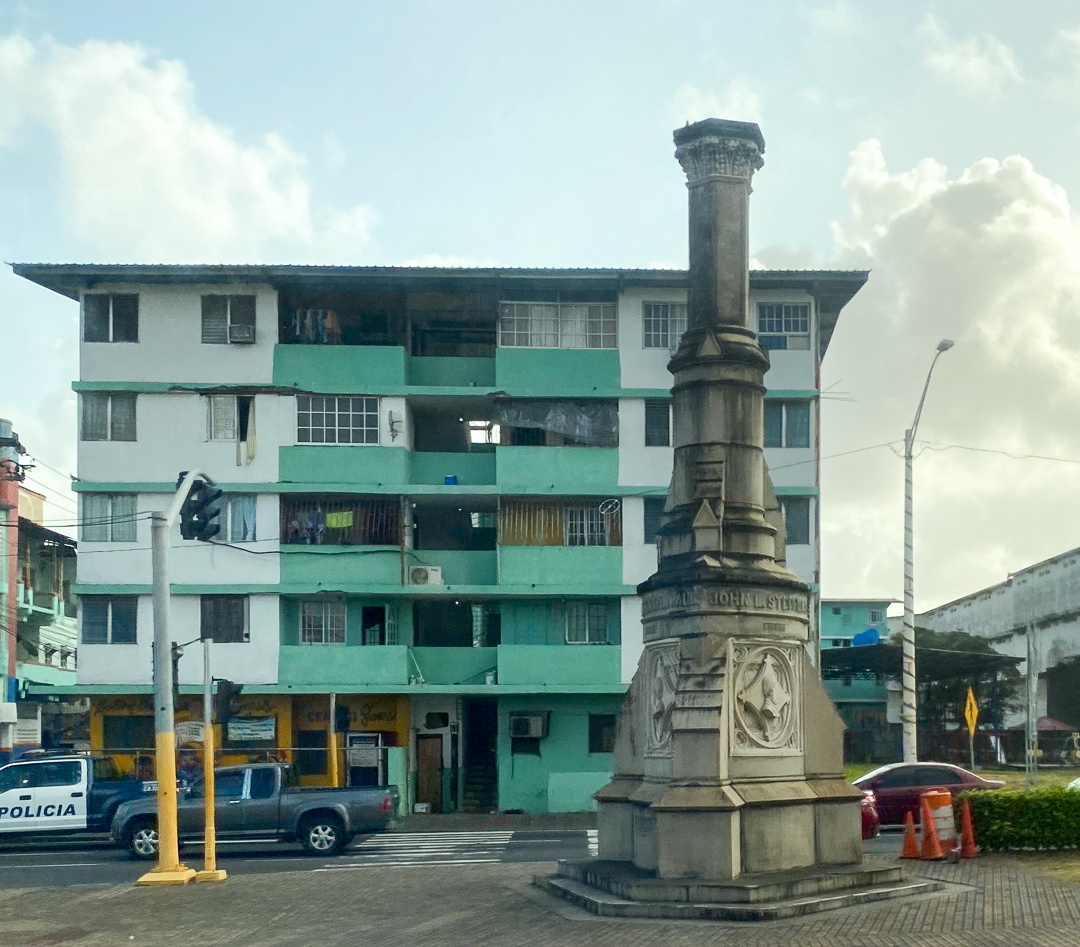 A short time later, we were at the Agua Clara Visitor Center near Gatun Lake, on the Canal Expansion. We watched a movie about the canal, saw a very large ship go through the lock (note the sliding lock gates here, versus the mitre gates on the original canal), and spent some time and a little cash in the gift shop. 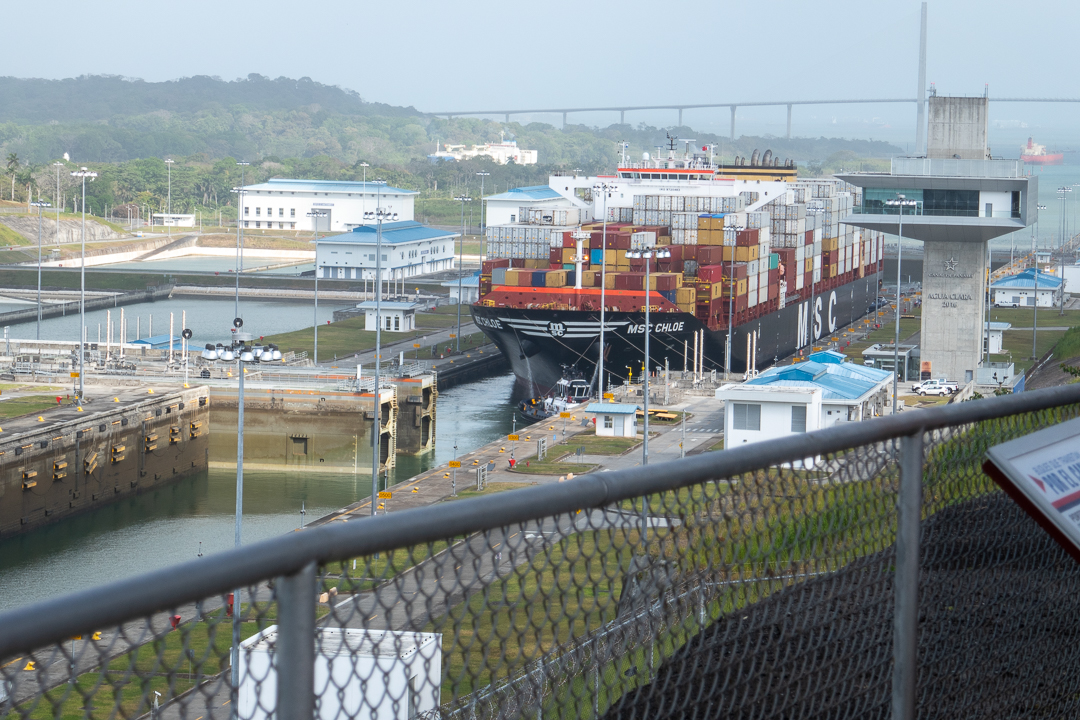 The highlight of the day, though, lay ahead, in the Gatun Basin. The bus parked under an overpass and we walked down a path to the Gatun River, where we met our guides and boarded their dugout canoes for a journey to the village of Embera Drua. 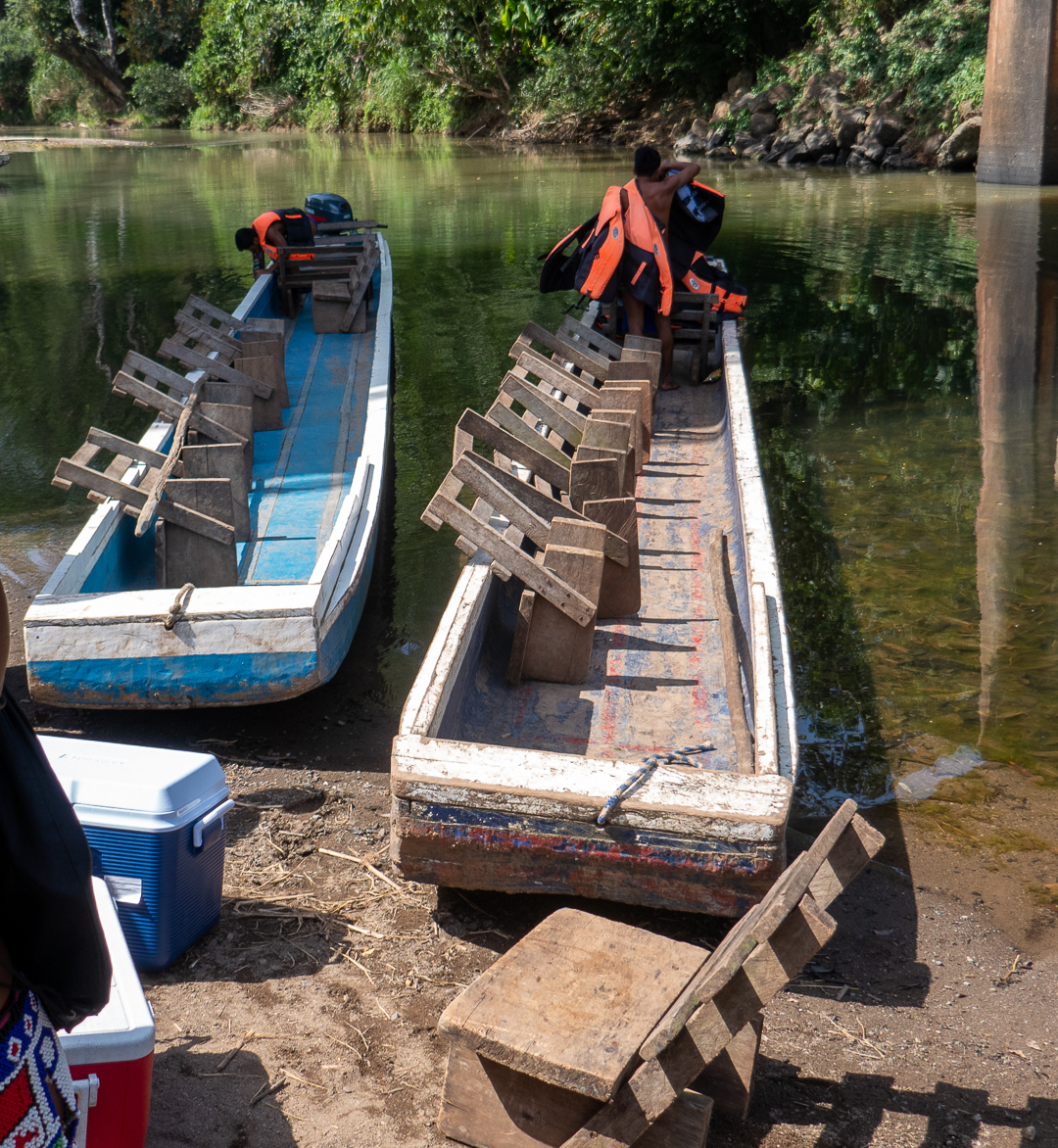 Of course, the canoes had 40-horsepower outboard motors and we were required to wear life vests! 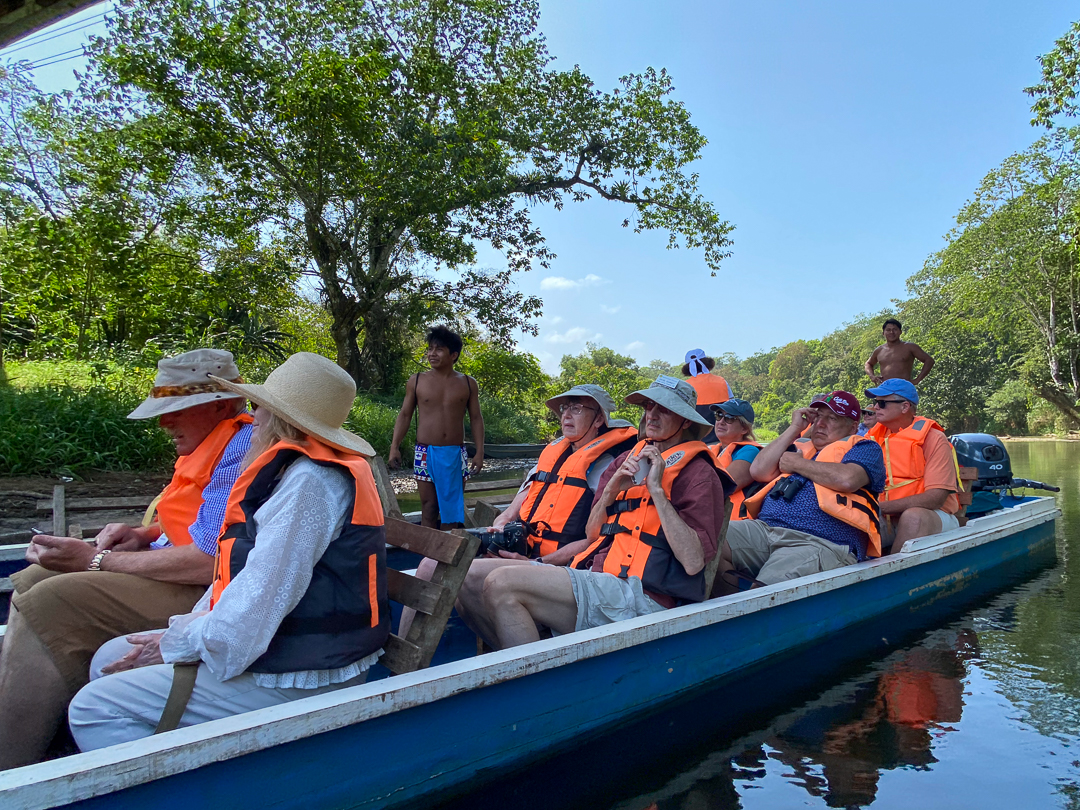 It didn’t take long to arrive at the village.

This village makes its living from tourism, so they greeted us enthusiastically. 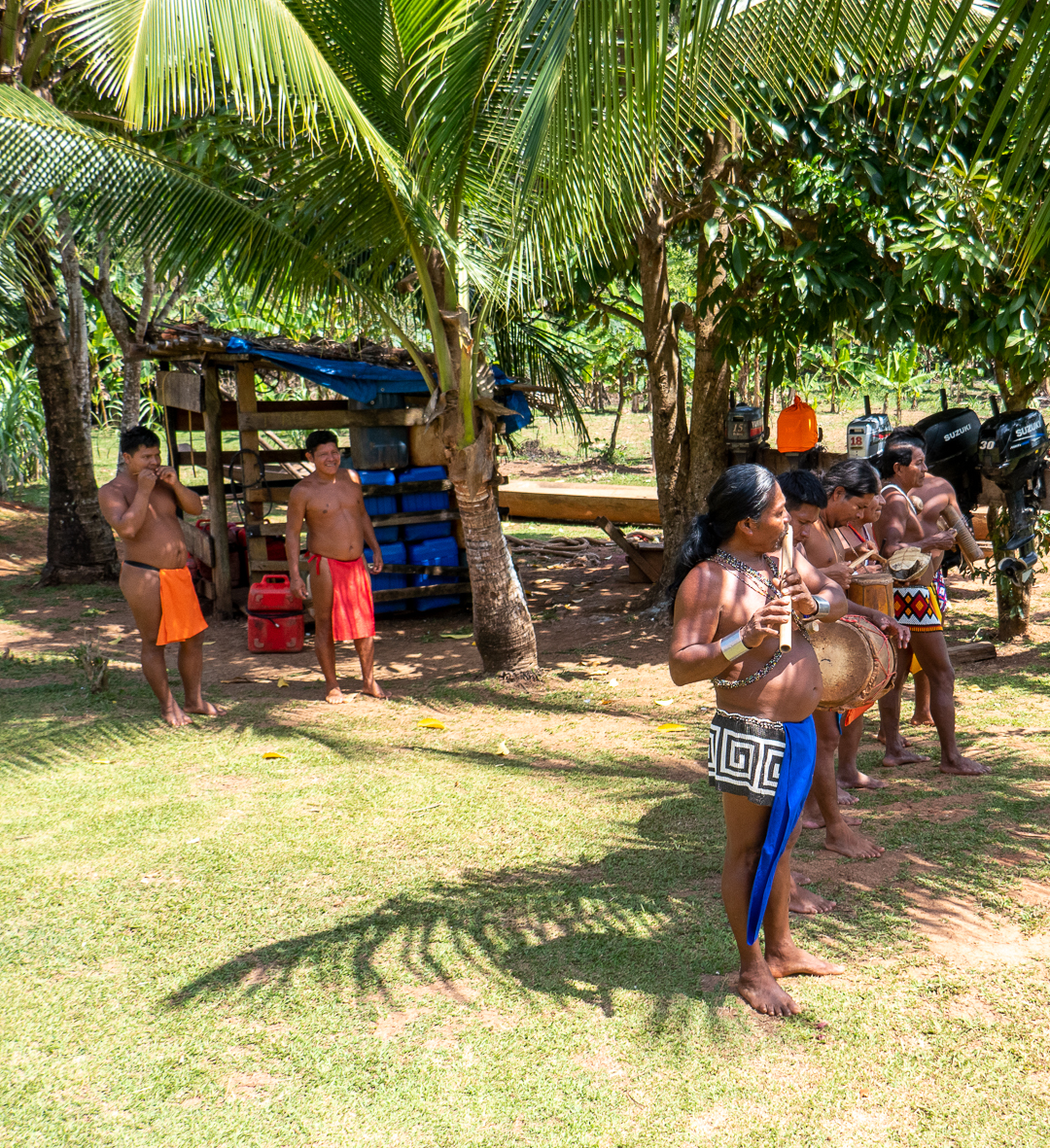 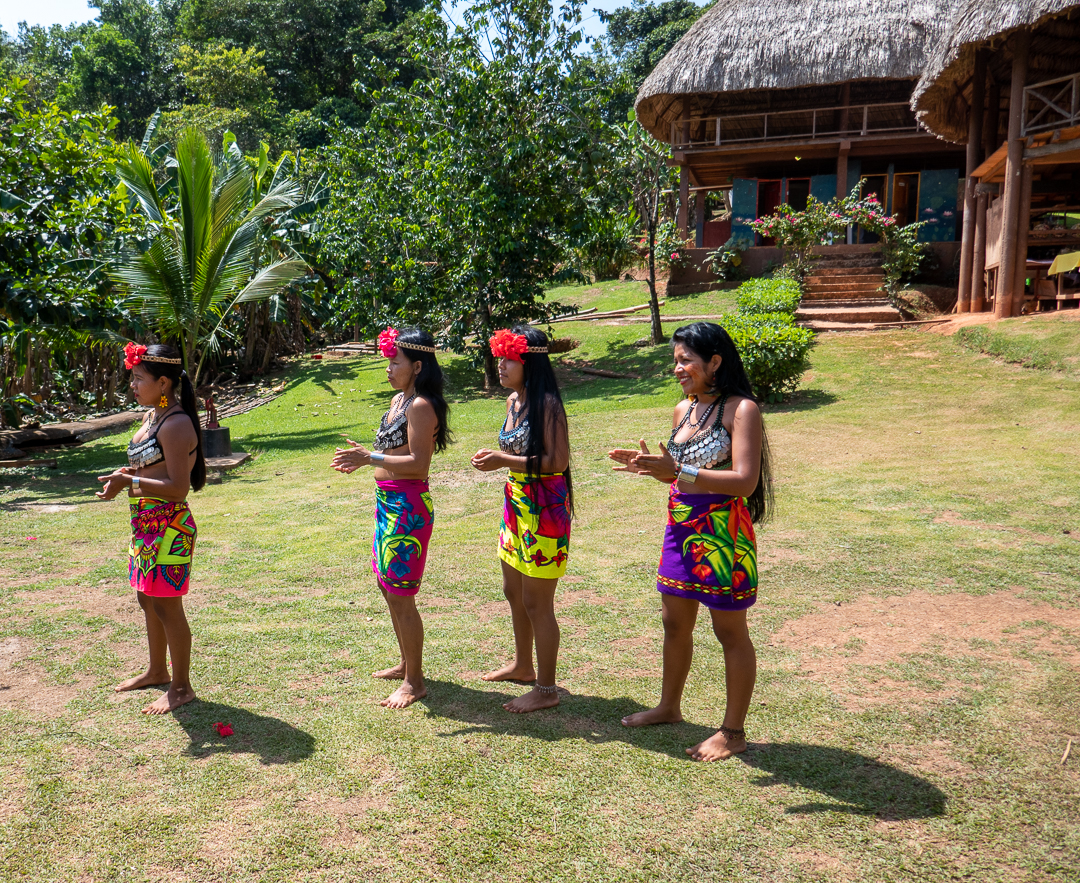 Millie, a 23-year-old who had a BA in Business, was working on her MBA, and would be going to Japan in a few months to present at a conference if the coronavirus permitted, gave a brief talk about the village and its people. There were 20 families, about 80 people; they had moved here from the Darien in Colombia about 13 years ago because FARC controlled their area and it wasn’t safe. They had better economic opportunities here, and better education was available for the children – in the Darien, going beyond elementary school required leaving their community, while they have an elementary school here in the village and the junior high and high schools are only an hour away.

Tourism gives them the chance to make money and preserve their culture instead of moving to the city and being absorbed by it – they want us to share our experience on social media and encourage friends and family to visit (and I’m happy to comply!).

While Millie was talking, some of the women prepared lunch for us (fruit, followed by fried tilapia and plantains served in a banana leaf cone – absolutely delicious!) 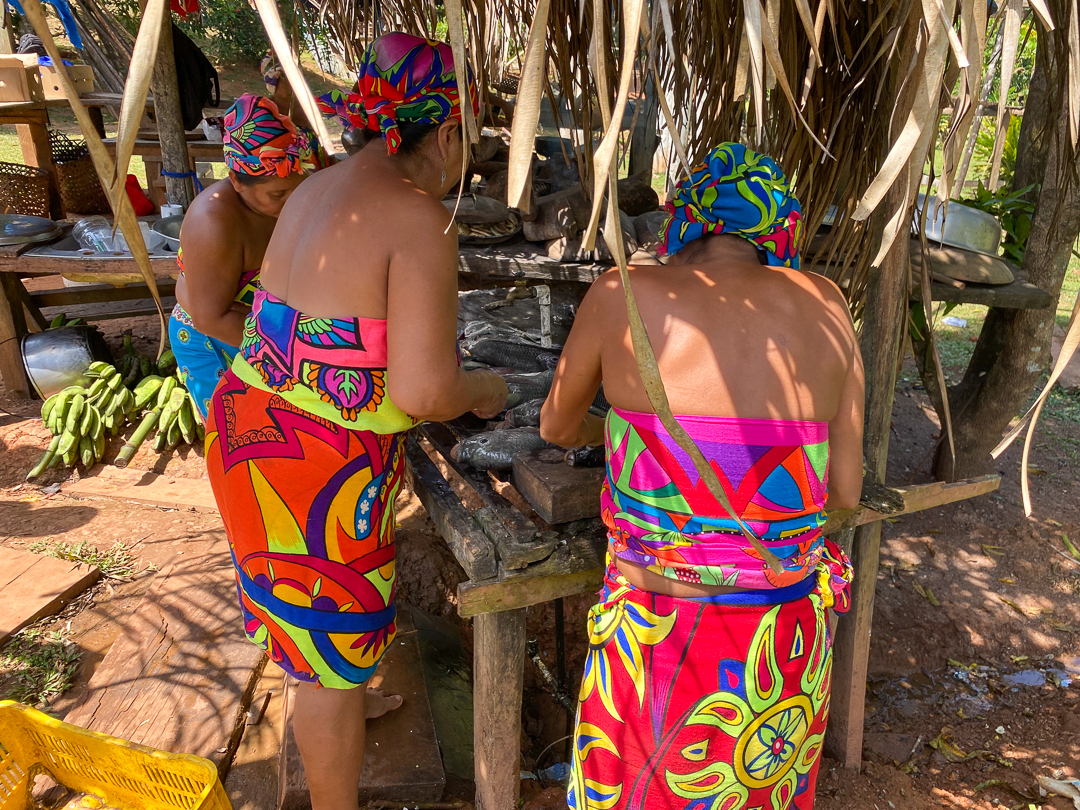 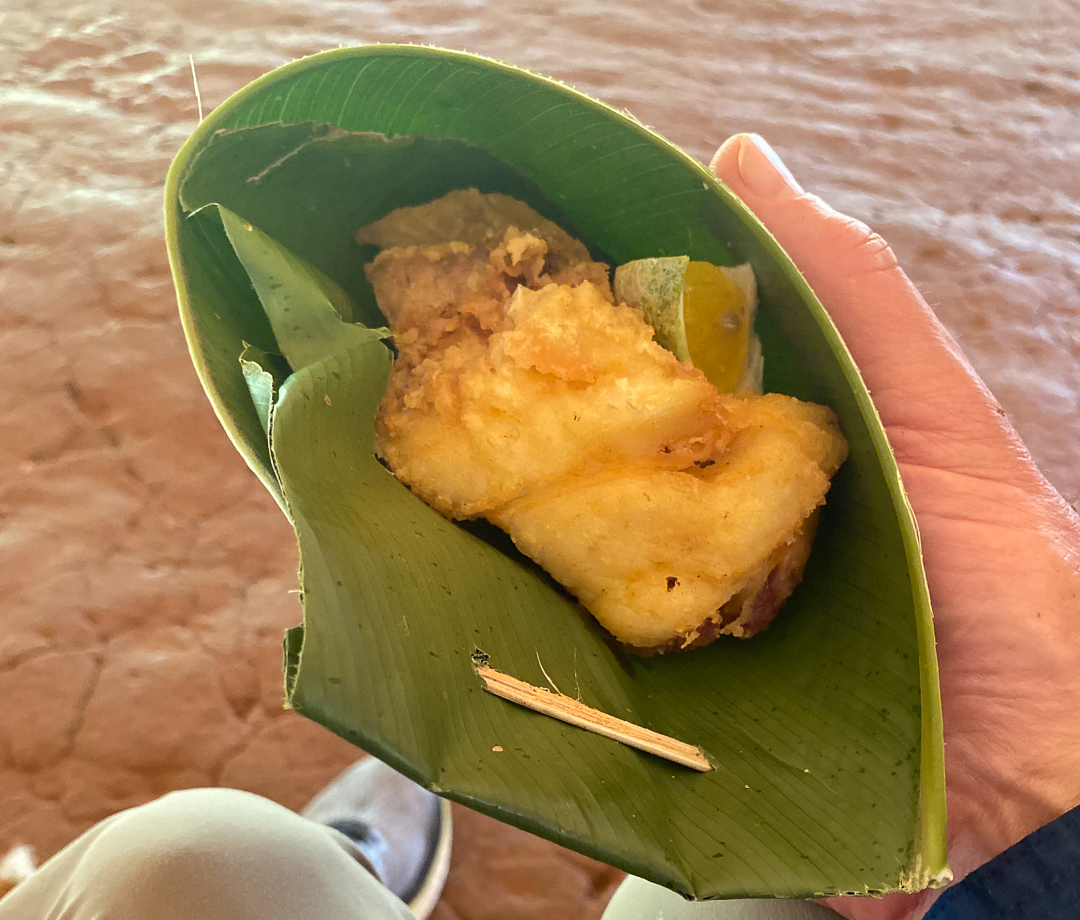 After lunch, we took a tour of the village, including the most distracting classroom I’ve ever seen. 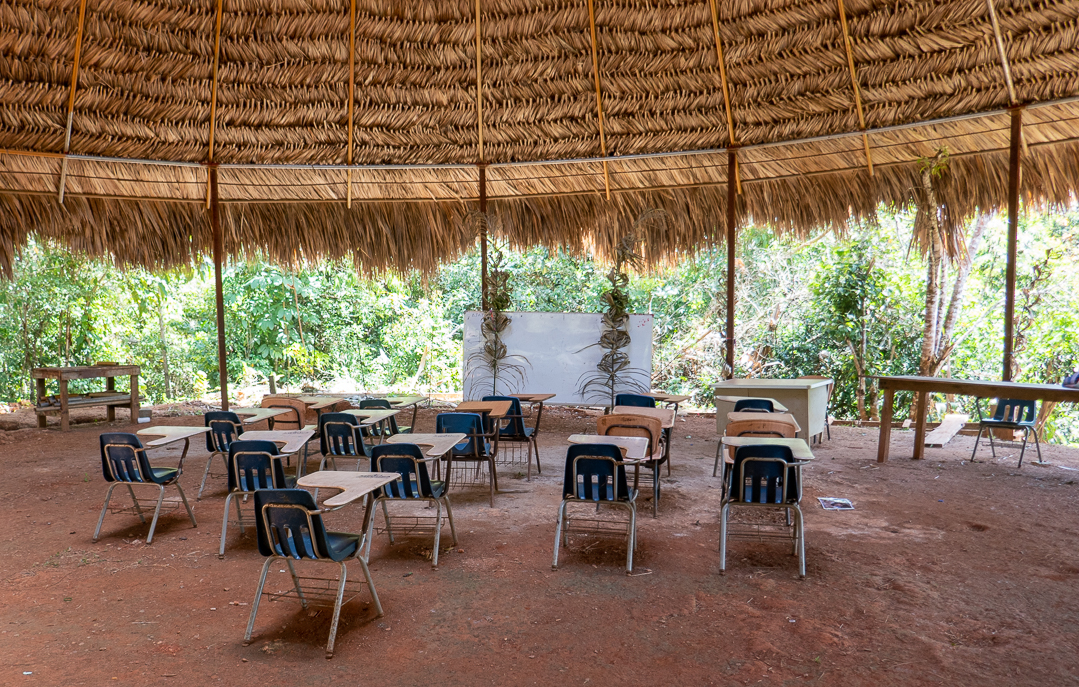 Our guide was one of the village elders. 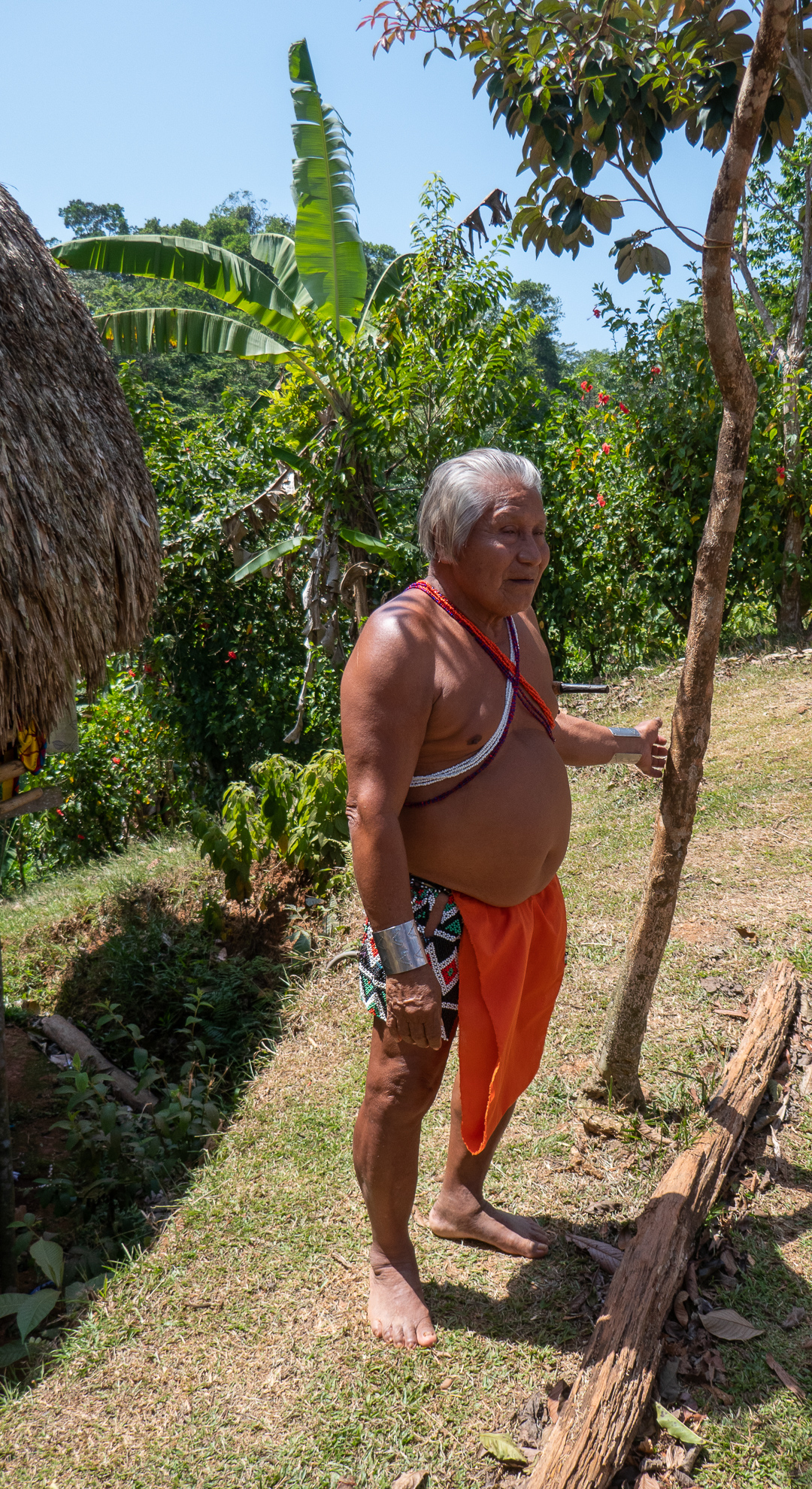 We returned to the center of the village for a show of music and dancing. 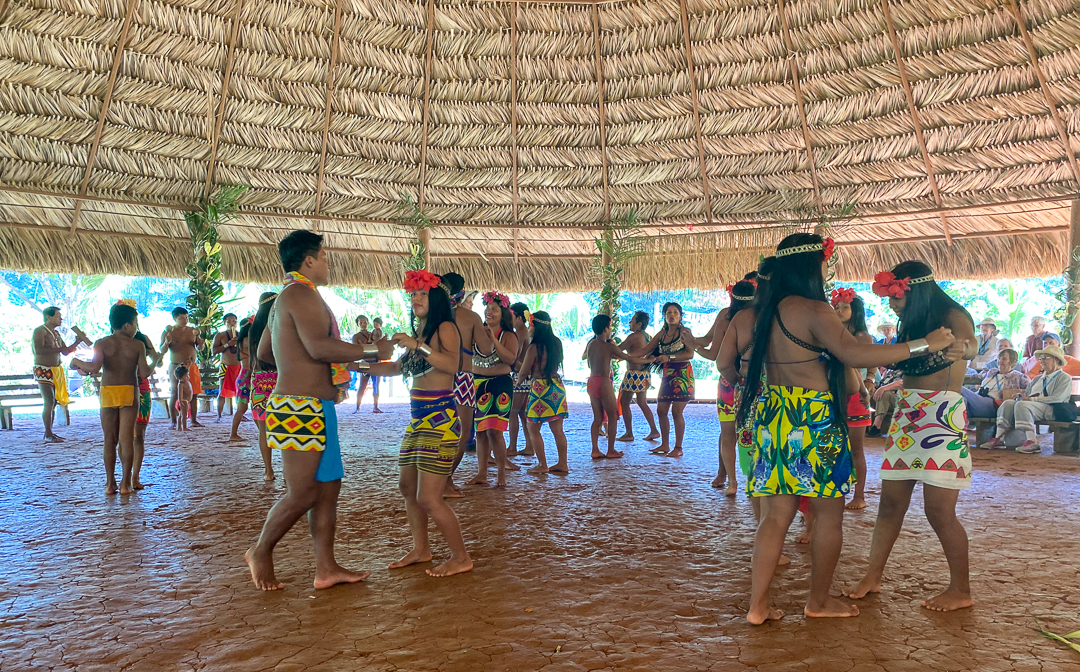 There was one more chance to shop (some of the villagers accepted credit cards, and there was good cellular Internet available), then it was farewell. 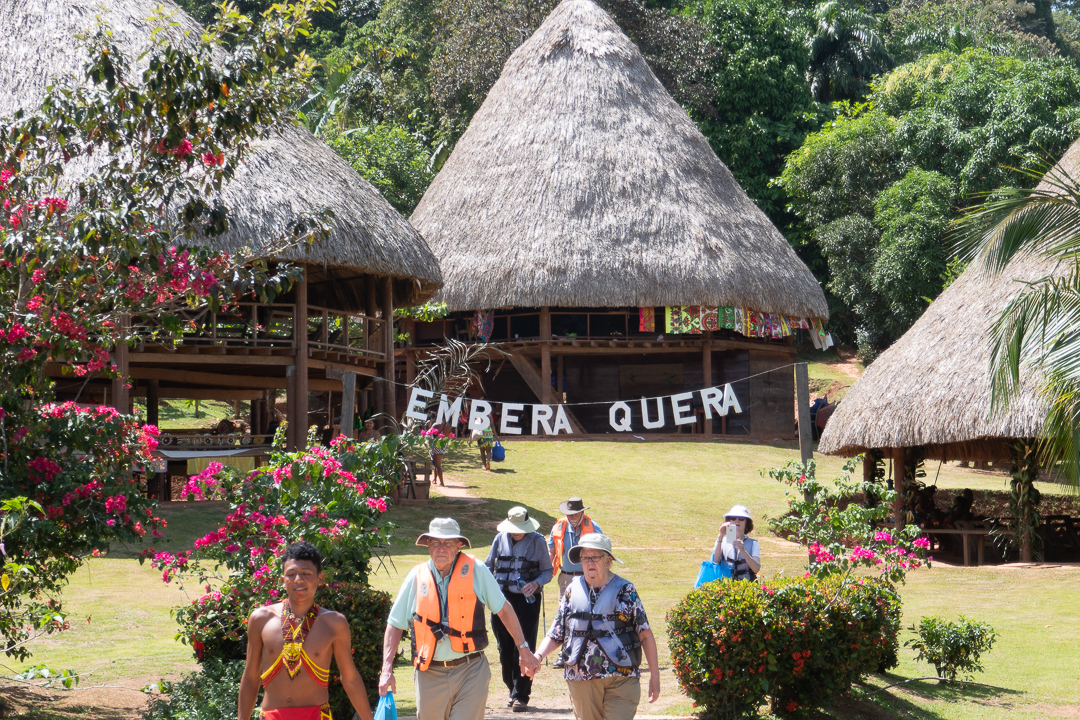 A couple of hours later, we were in a very different environment – Panama City. 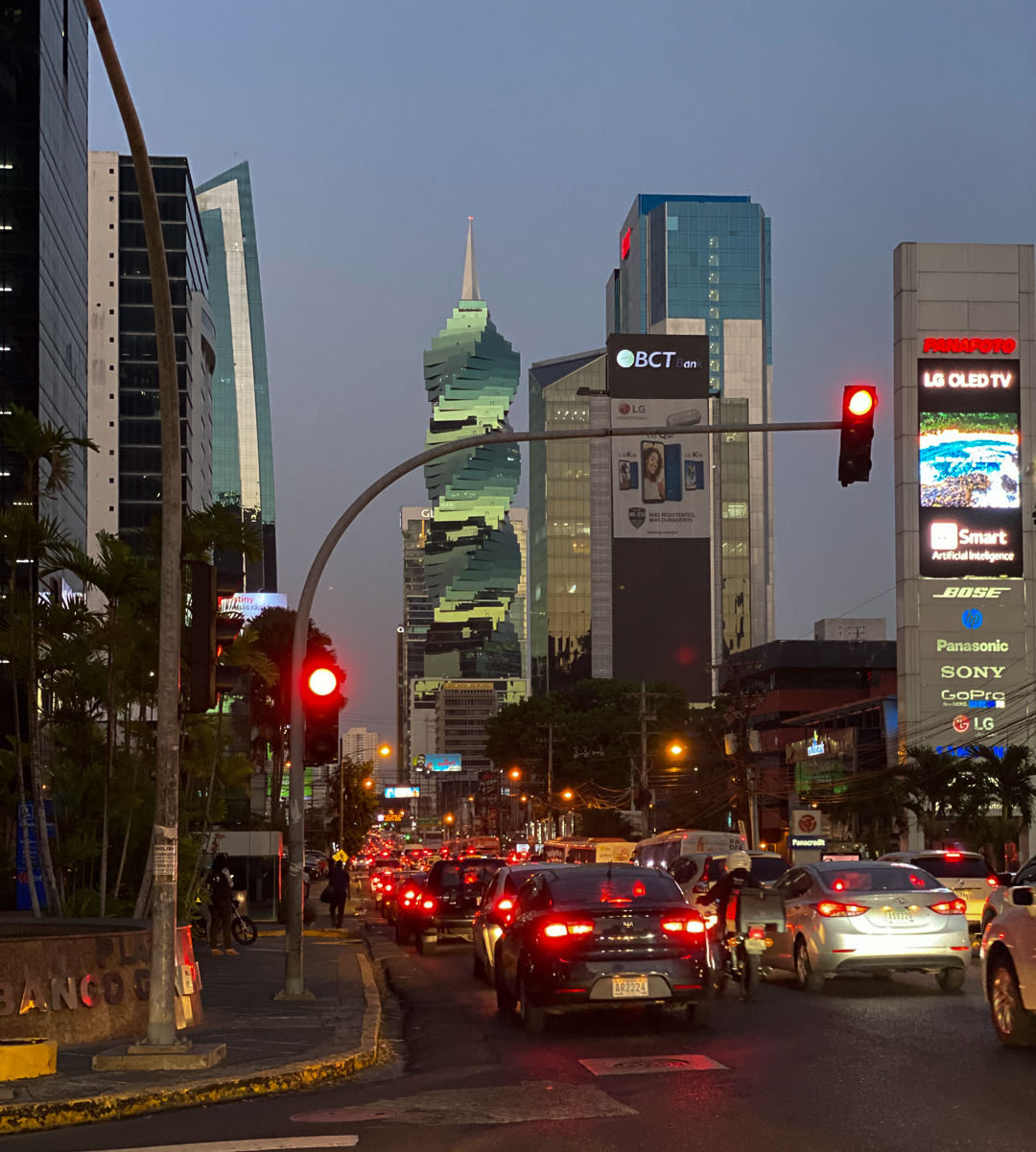 We had to figure out dinner on our own for the first time in a week; we walked a few blocks with friends to the waterfront and had wonderfully delicious seared tuna at Azahar. 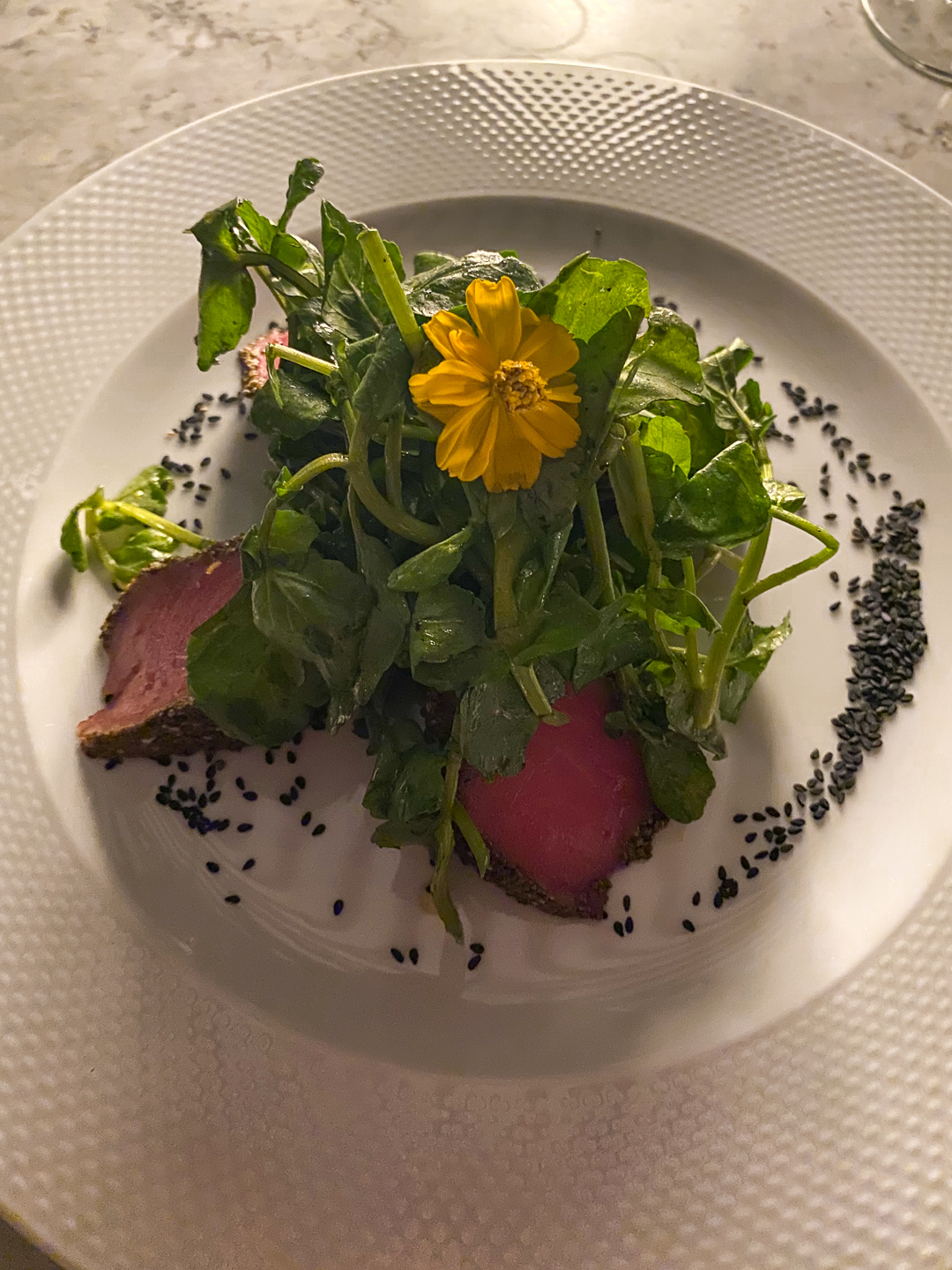 We ate outside – the view wasn’t half-bad! 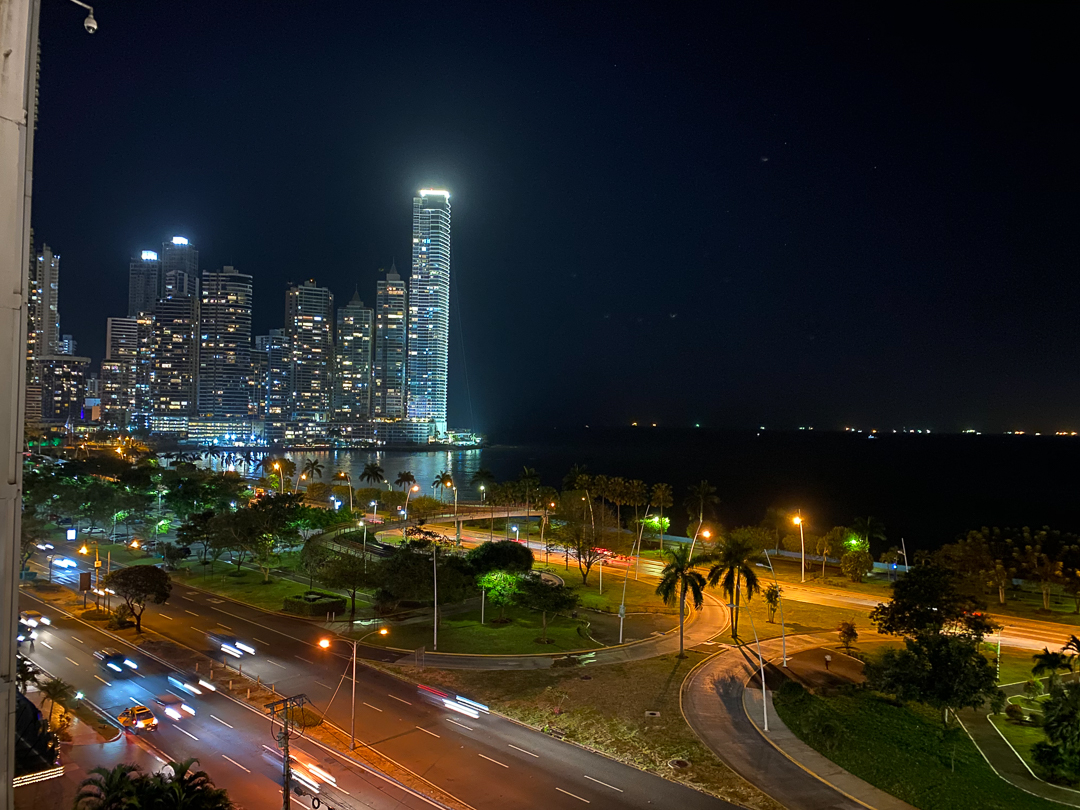