We were the last group off the ship this morning, which gave us the luxury of sleeping late and having a leisurely breakfast and time to wander around the ship before boarding the tender for Vigur Island. The island is family-owned and only a limited number of visitors are allowed on at any time.

The main attraction of Vigur Island is the wildlife – puffins, Arctic terns (which can be vicious – we had to carry sticks to avoid being attacked by them), and eider (ducks). The island produces about 50kg of eiderdown per year, of a world production of only 3500kg – the down is harvested from the nests of the ducks after they shed it.

We survived the terns and were treated to “happy marriage cake” before leaving the island.

After lunch, we sailed to Isafjördur and visited the Maritime and Folk Museum. There, we sampled some Icelandic delicacies – dried fish, preserved shark, and Black Death (Brennivín Icelandic schnapps). The schnapps was the best of the three offerings.

After that, we stopped at a waterfall where we drank water right from the glacier that fed it – untreated! 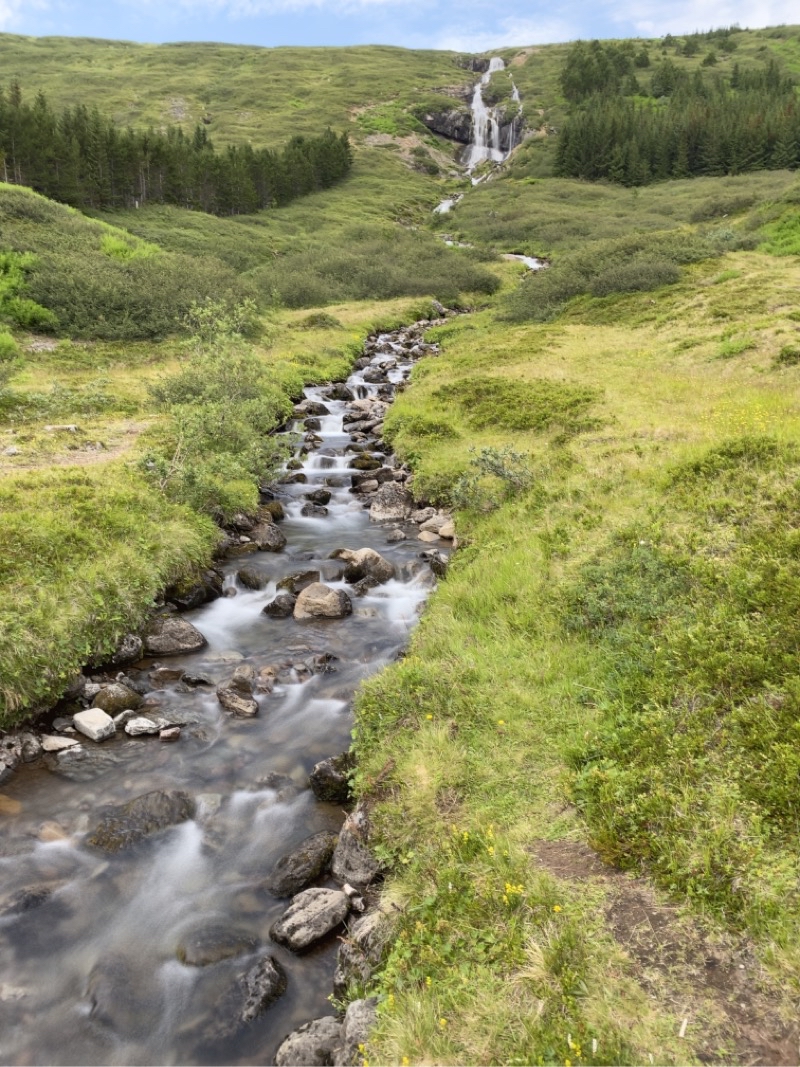 Then we drove through a six-kilometer long tunnel to Bolungarvik for a short concert in an old church and a visit to the Fisherman’s Museum.

And now we’re back on the ship, en route to Grimsey Island and the Arctic Circle. I expect to lose connectivity soon, so I’m posting now!

We said farewell to the Hotel Borg this morning and boarded our bus for the Golden Circle tour.

We drove past the geothermal power plant, nearly to Selfoss, through Geysir, and on to Gullfoss where we got off the bus and walked to the end of the trail over the falls. Along the way, we took photos of a big glacier and of fishermen in a river.

Back to Geysir for a walk to Strokker geyser, which erupts every few minutes. It wasn’t easy to capture it, but I finally got some video.

Lunch was at Geysir Restaurant – salmon with Icelandic barley, potatoes, and a vegetable soup. Also South African wine (Cape Heights Cabernet Sauvignon), though Icelandic beer was on offer, and I had an Icelandic orange soda, Applesin.

Next stop: Þingvellir, the original seat of the Icelandic Parliament, and the place where the European and North American plates touch. I took many photos, but bandwidth restrictions prevent me from sharing them now.

Boarding the ship was complicated because of Covid; we are their first passengers since Before, and things are still a bit uneven. 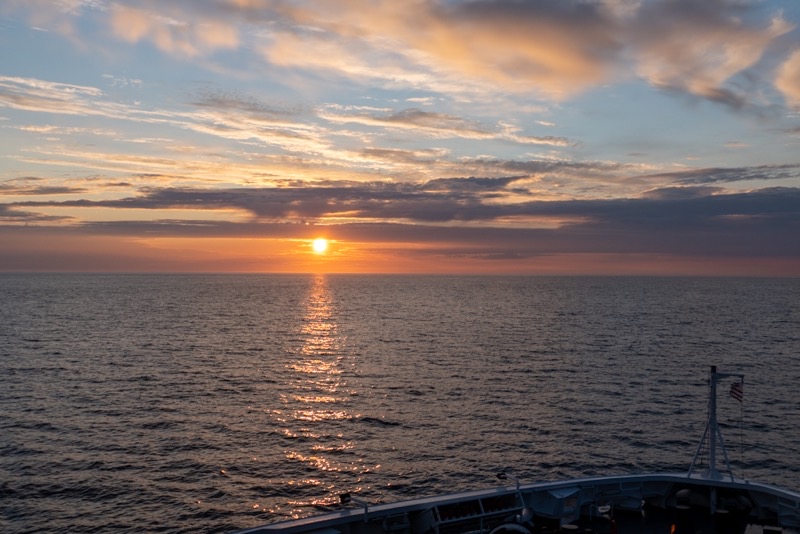 Connectivity is very slow out here, but I’ll do what I can!

This morning, we began our tour with a trip to the Perlan to get a preview of the wonders of Iceland, including a trip through their Ice Cave (kept at -5C, made with more than 350 tons of snow). 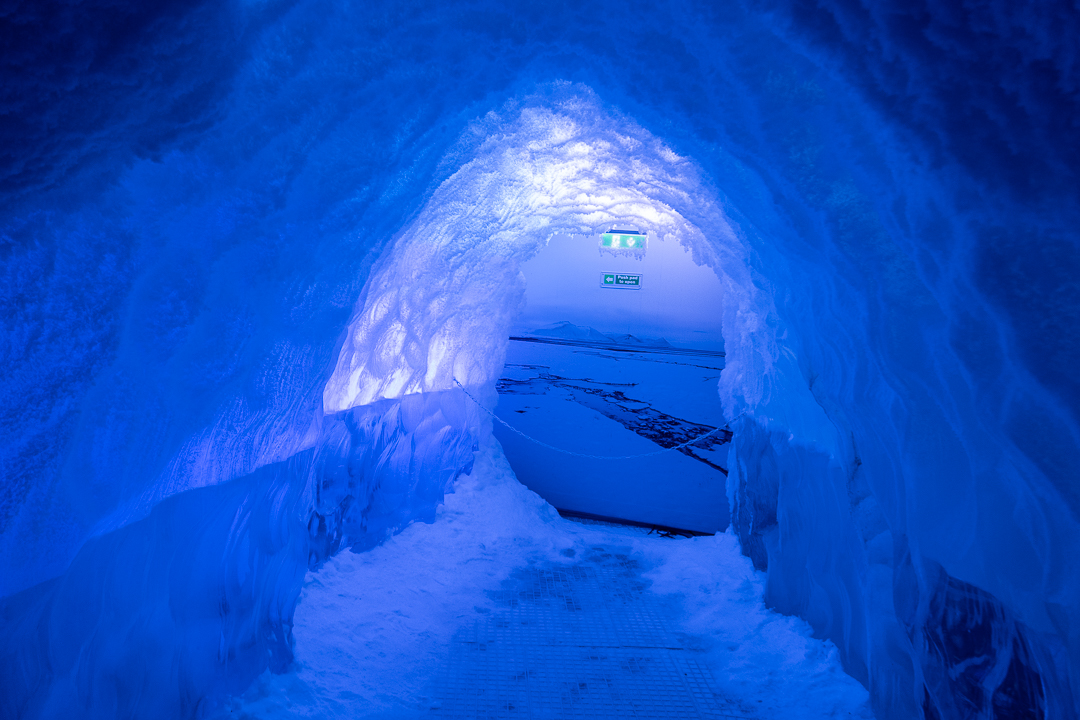 The Glacier exhibits were fascinating, and more than a little scary when they used time lapse photography to show how much glaciers like the Mendenhall in Alaska have shrunk during the 21st Century; there was also an obituary for the Okjökull Glacier, which was declared dead in 2014.

I also enjoyed going outside on the fourth level to take in a 360Âº panorama of Reykjavik – while we were out there, the guide told us that you could get a very nice 3-bedroom apartment in a very nice part of town for about 1 million US dollars – those of us from the Bay Area wondered why it was so cheap!

From the Perlan, we took a long bus ride through the outskirts of town, eventually winding up at the National Museum of Iceland. This was the last stop of the day; the bus left 30 minutes after we got there, but several of us stayed behind to explore more of the history of Iceland (the museum was a 15-minute walk from the hotel, so planning to miss the bus wasn’t a big deal).

Lunch was at an interesting Middle Eastern restaurant, Mandi, near the hotel. The food was good, the prices reasonable, and the atmosphere non-existent. Diane and I had a “mixed plate” with lamb, chicken, and cod, plus plenty of salad. We also tried basil seed drinks which were bottled in Thailand for a company with Jordanian and Swedish phone numbers – the label, of course, was entirely in English, and the size was given in US fluid ounces first, with metric as an afterthought. 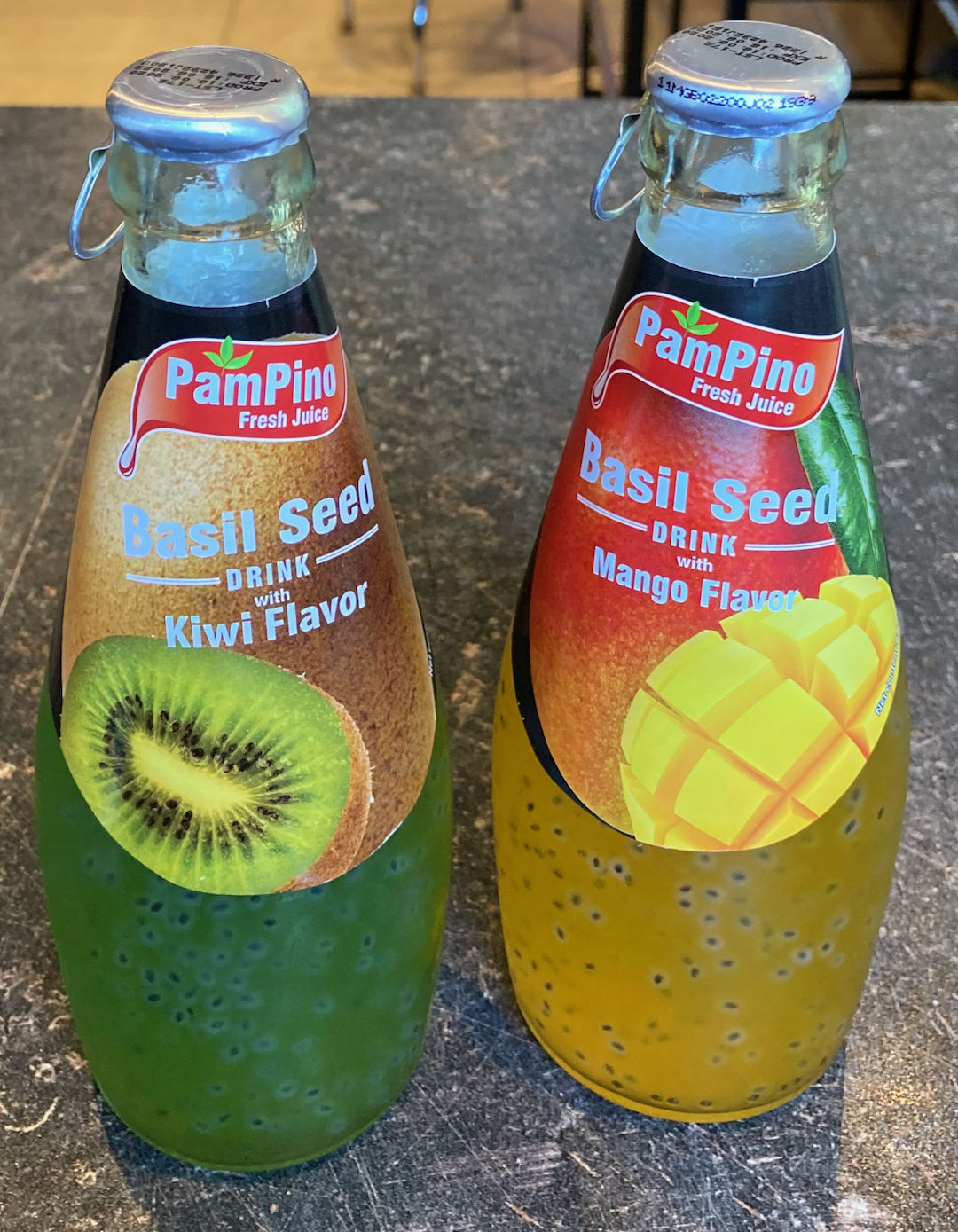 We spent the afternoon roaming around the city (if you want total honesty, it was so I could buy candy – I had to use a self-service cash register with Icelandic prompts!) and returned, one more time, to Caruso for dinner.

Tomorrow morning, we leave the hotel for a Golden Circle tour and end up on the ship – it’s already in Reykjavik, where the crew has been serving a two-week quarantine before starting to sail with passengers; I guess we’re the beta testers!

Our pre-tour officially began this morning when we got into a mini-bus with a dozen other travelers for our excursion to the Blue Lagoon. 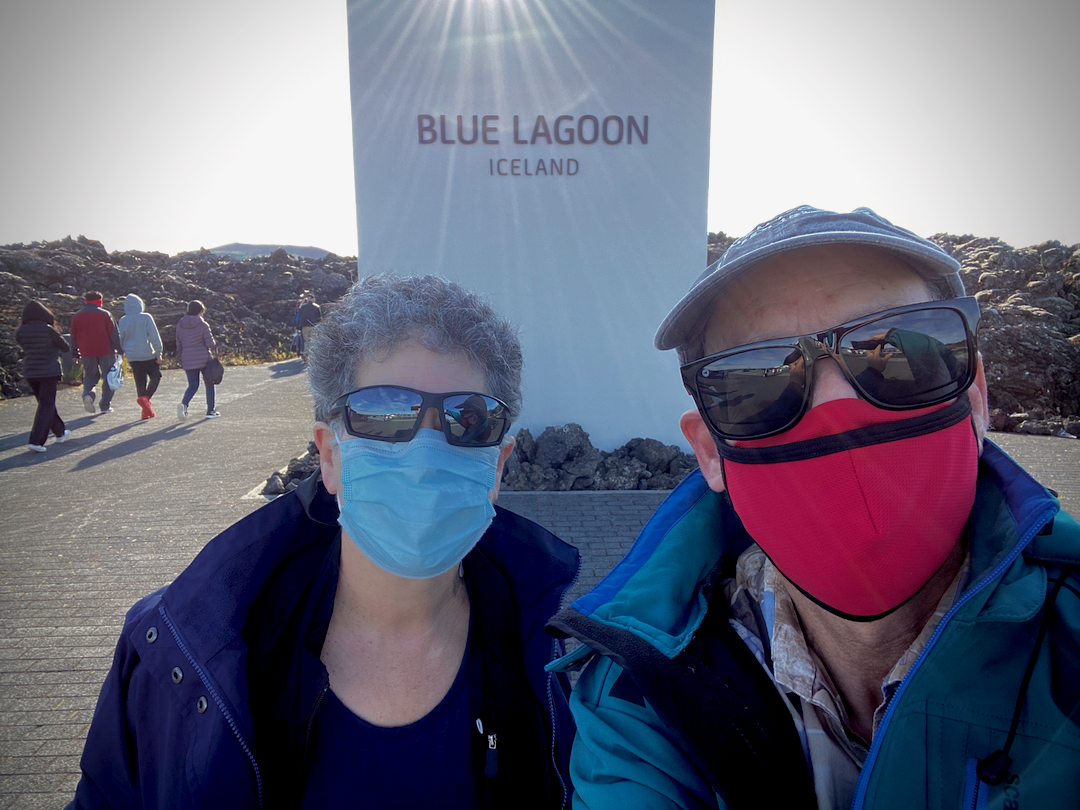 The trip included a buffet breakfast (in Iceland, such things still exist!), a swim in the lagoon, a drink, and their silica mud mask – we took advantage of all four. 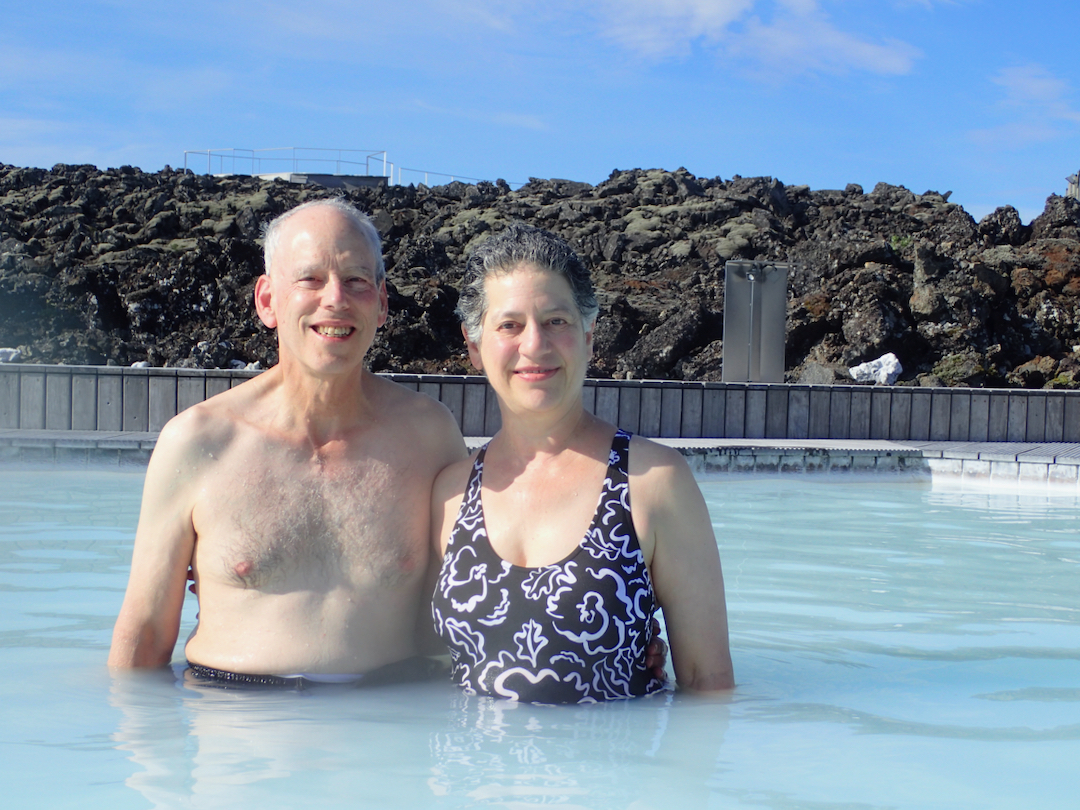 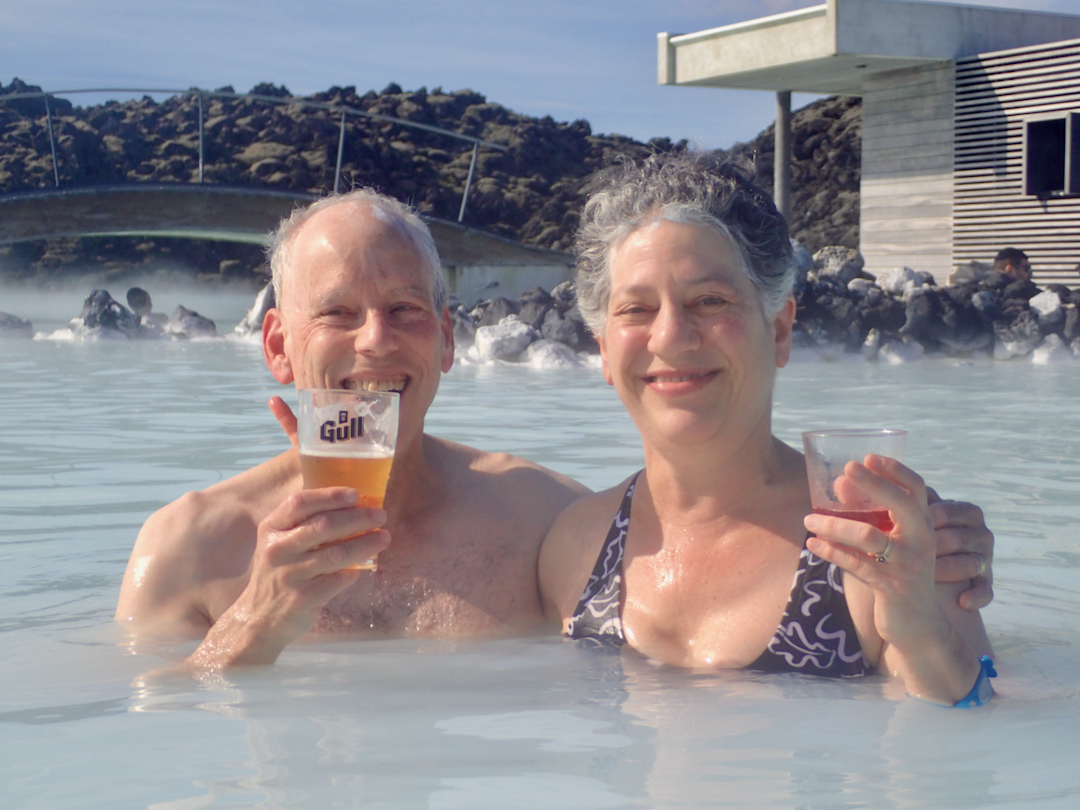 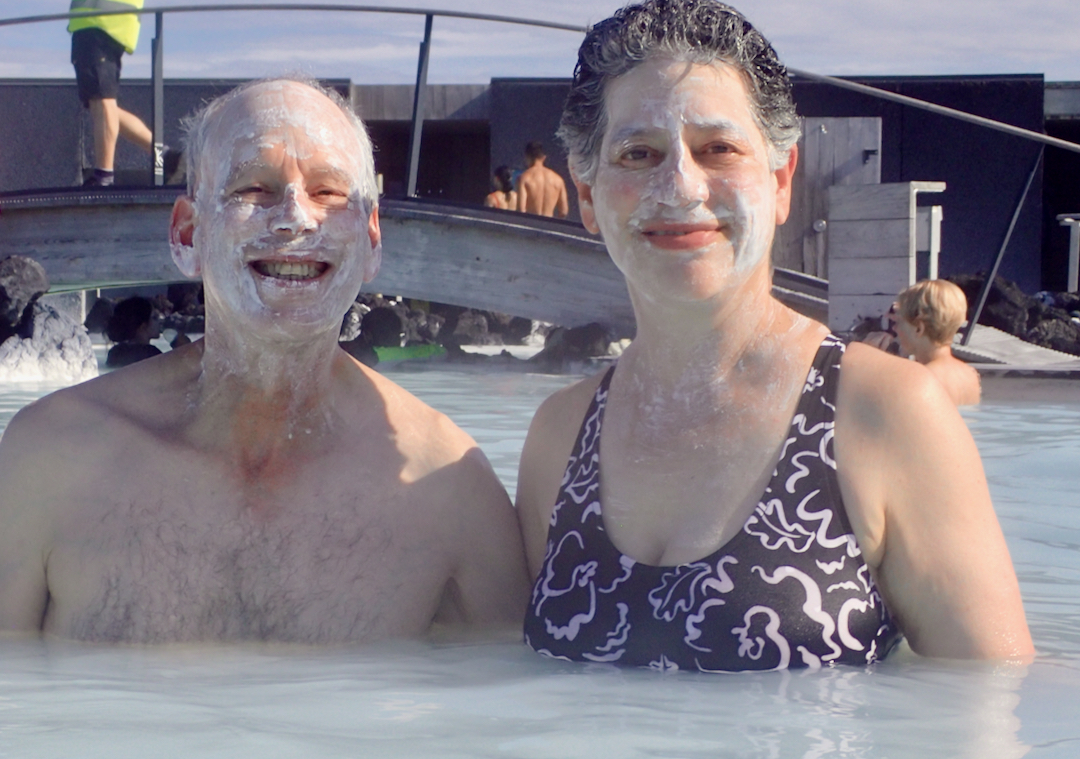 After the lagoon, we got onto a bigger bus for the trip into town and a visit to the HallgrÃ­mskirkja Church – since we’d been there already, we left the group and had lunch at 101 Reykjavik Street Food. I had the plokkfiskur (traditional Icelandic fish stew) and Diane had the lamb soup. I’d go back – even if they didn’t also give us free Prince Polo bars for dessert. 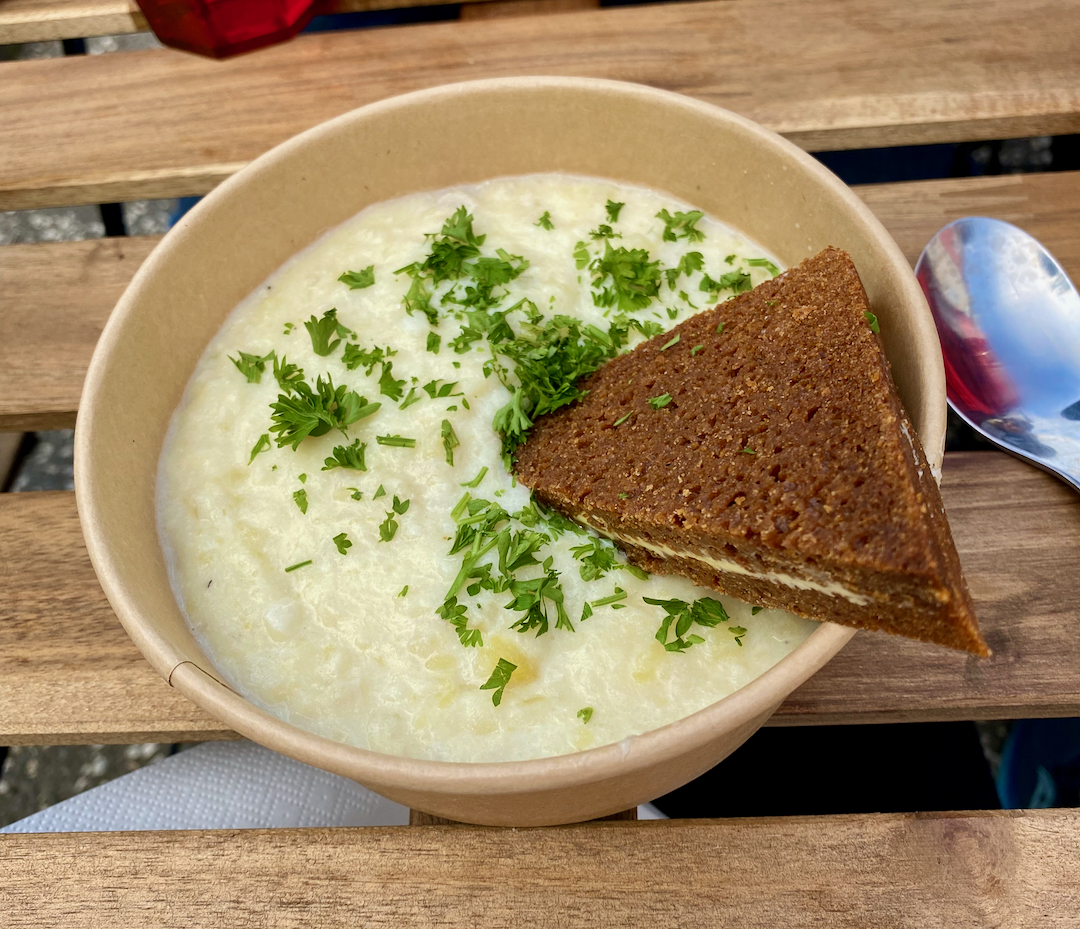 The rest of the day was “at leisure”, so we wandered around town, including paying a visit to the Sun Voyager sculpture on the waterfront. 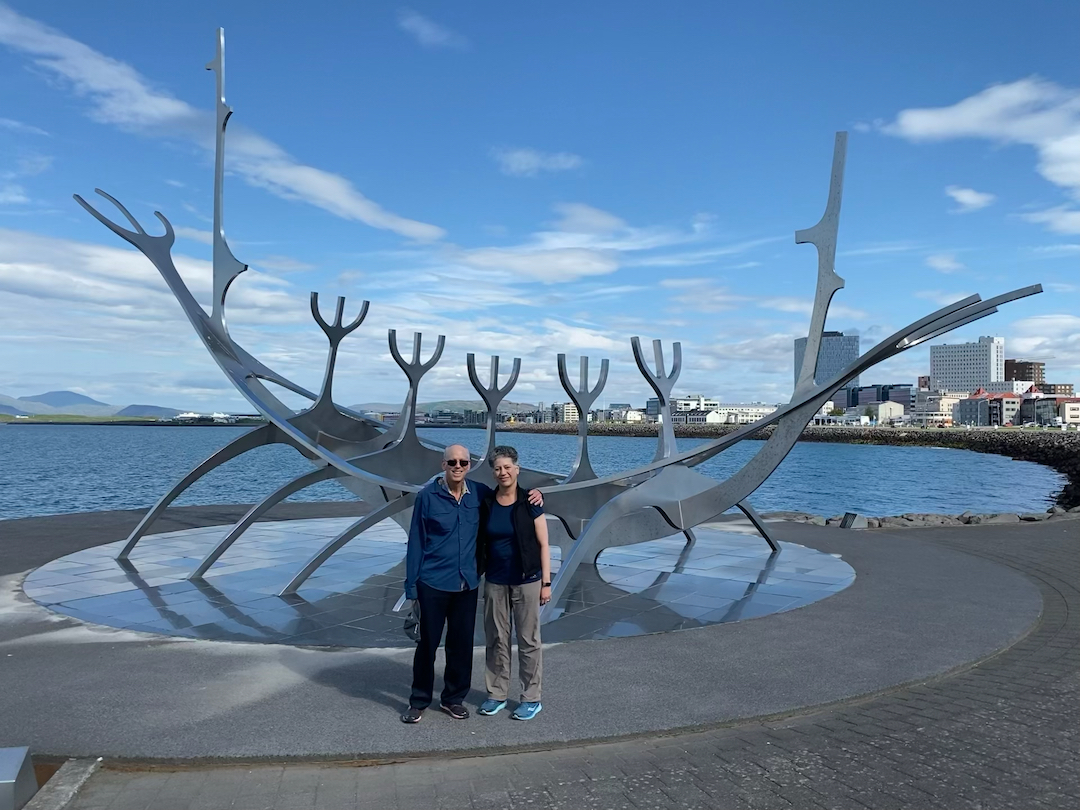 The weather was beautiful – sunny and 66 degrees – and outside restaurant seating was packed!

Tomorrow, we take a city tour in the morning – it’ll hit places we haven’t been yet, so we expect to stay with the group all day.

I follow a jet-lag reduction routine that I found a long time ago in Jane Brody’s column in the New York Times (if you’re a subscriber, you can read the article here; if not, most of the info is here). It seems to work well. Last night, I took my melatonin at 10pm, as directed, and was out soon thereafter, waking around 7am today and staying awake and feeling good all day – well, until I took melatonin this evening and started to feel tired again!

We visited two of the Reykjavik city museums today. This morning, we went to the Settlement Exhibition, which tells the story of the earliest days of the city, based on a 10th Century longhouse they discovered while building a hotel nearby. It was dark inside, so we didn’t take photos inside, but the outside was somewhat interesting. 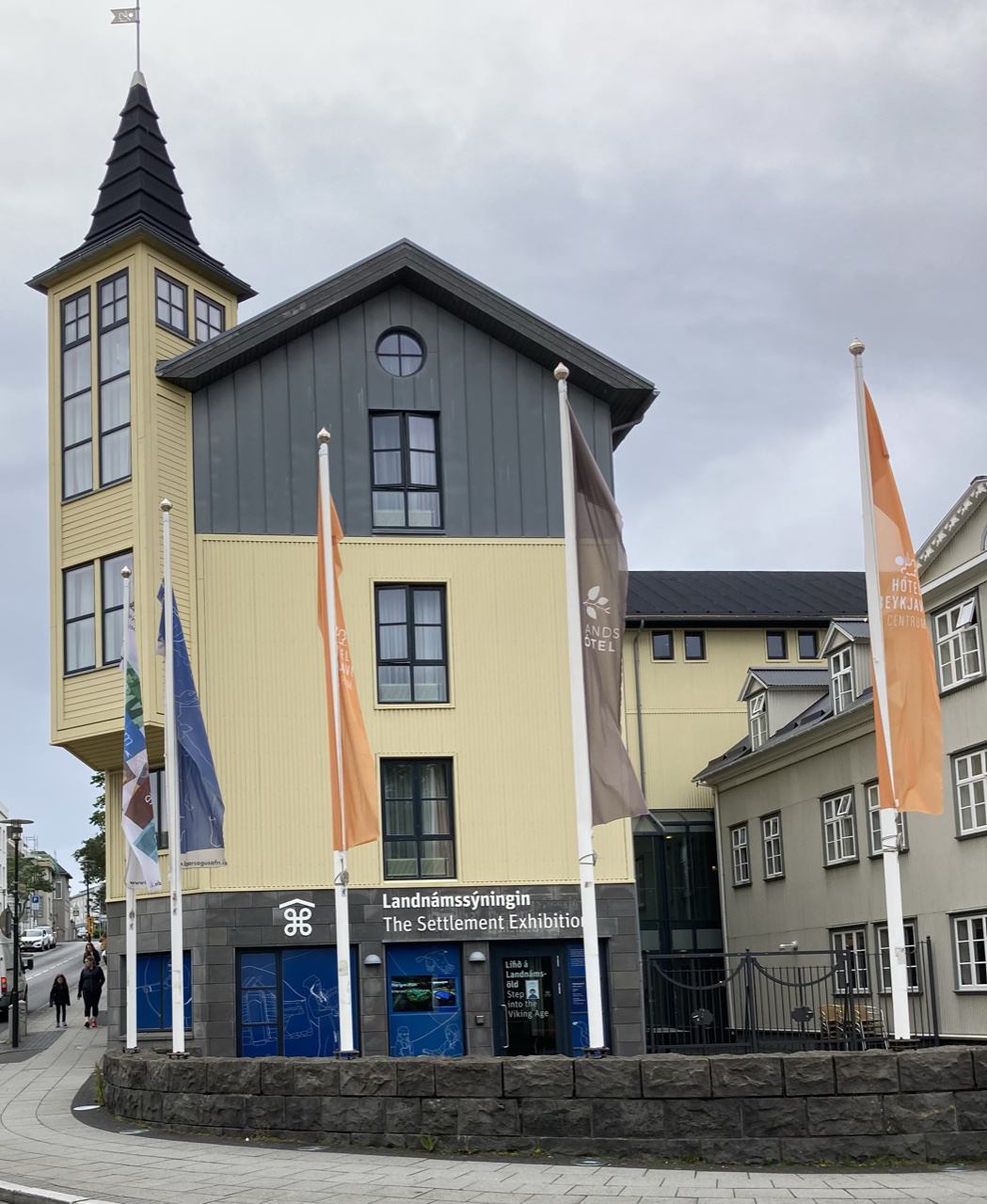 We lunched at Cafe Rosenberg, where we both had lox and bagels with honeyed cream cheese. 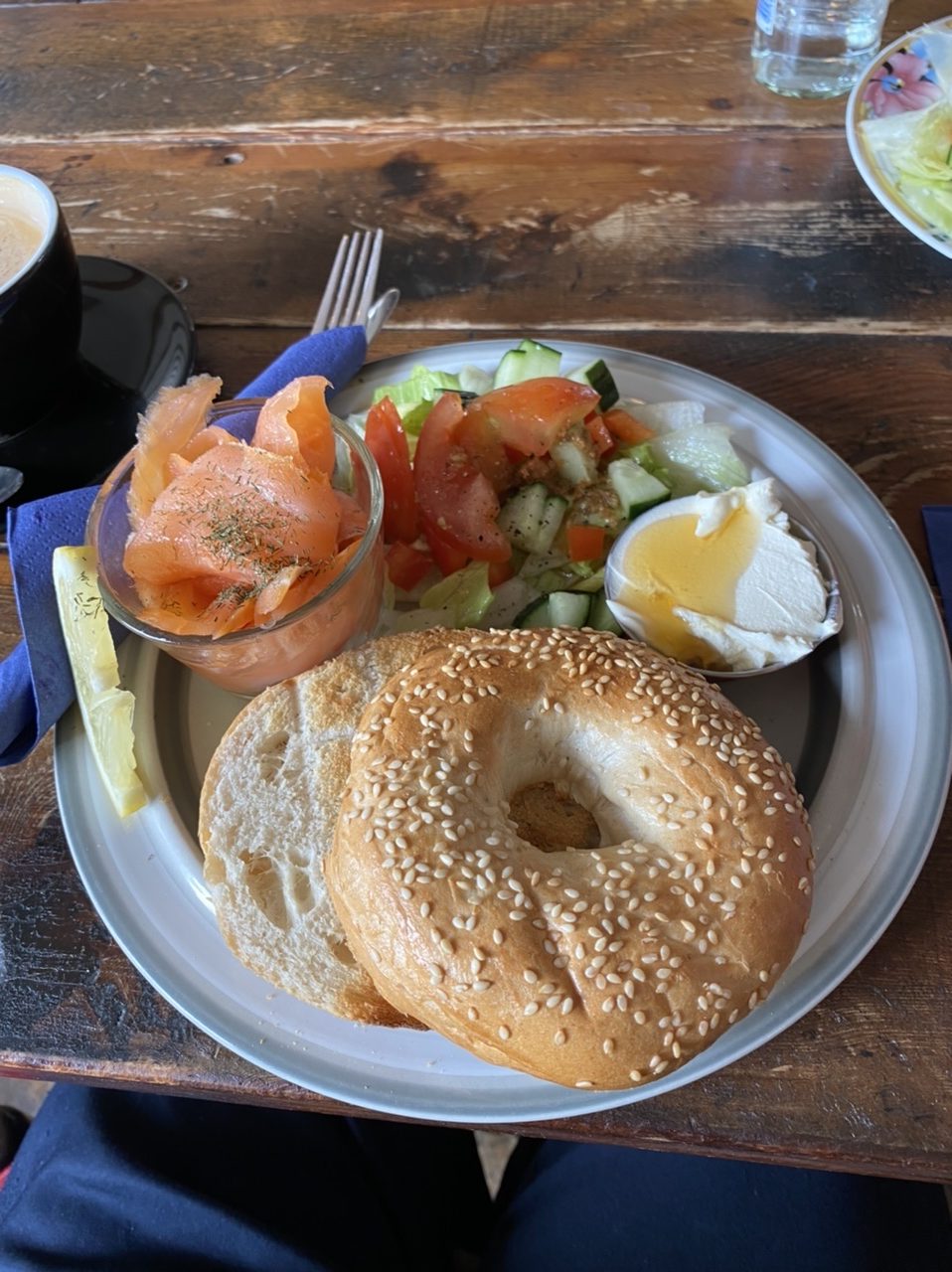 Somehow, we had room for dessert and went to Gaeta Gelato. Fortunately, they offered “little” cones (only $6!) that were just about the right size. 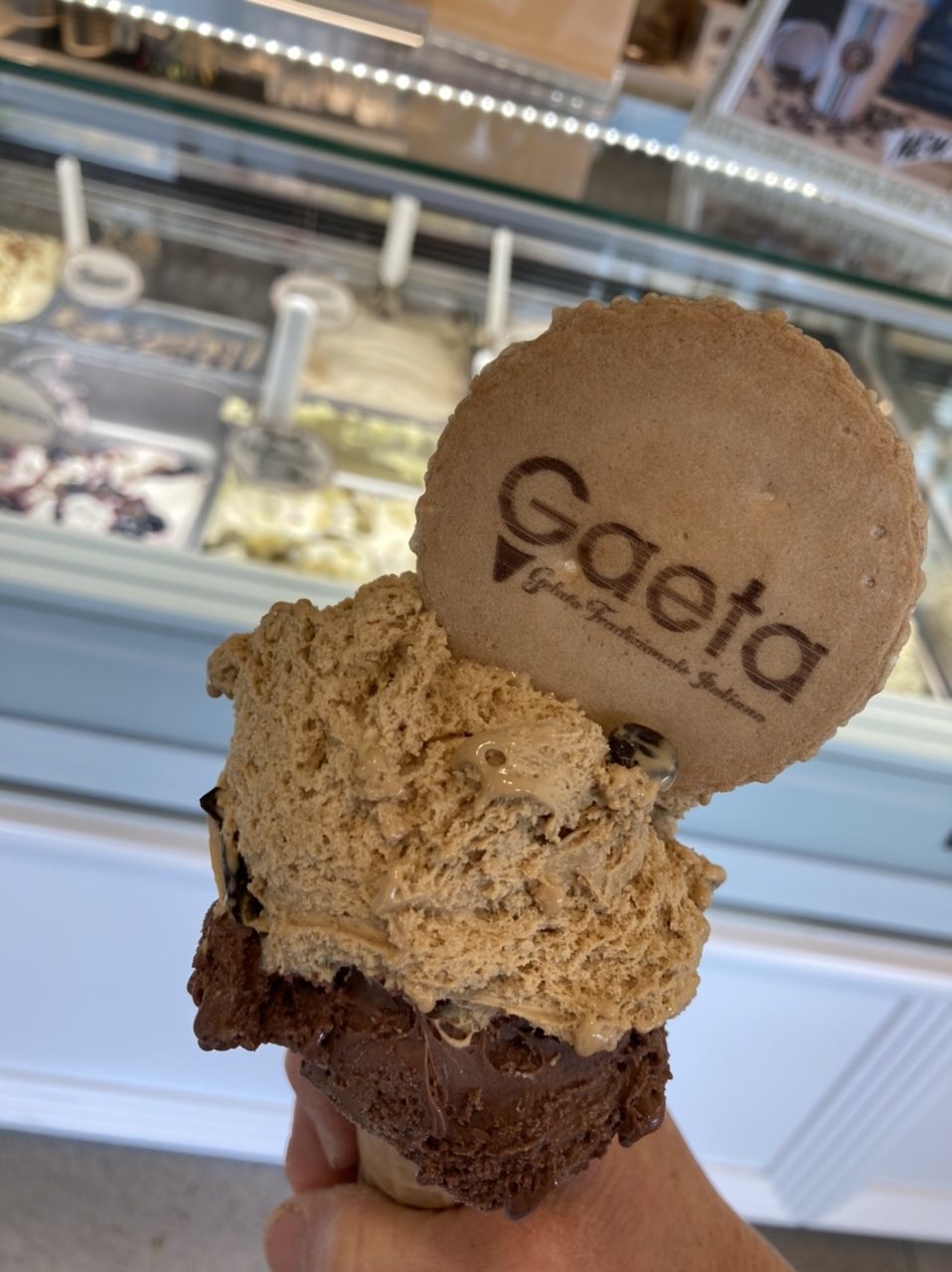 This afternoon, we went back to the Old Harbor to visit the Maritime Museum. 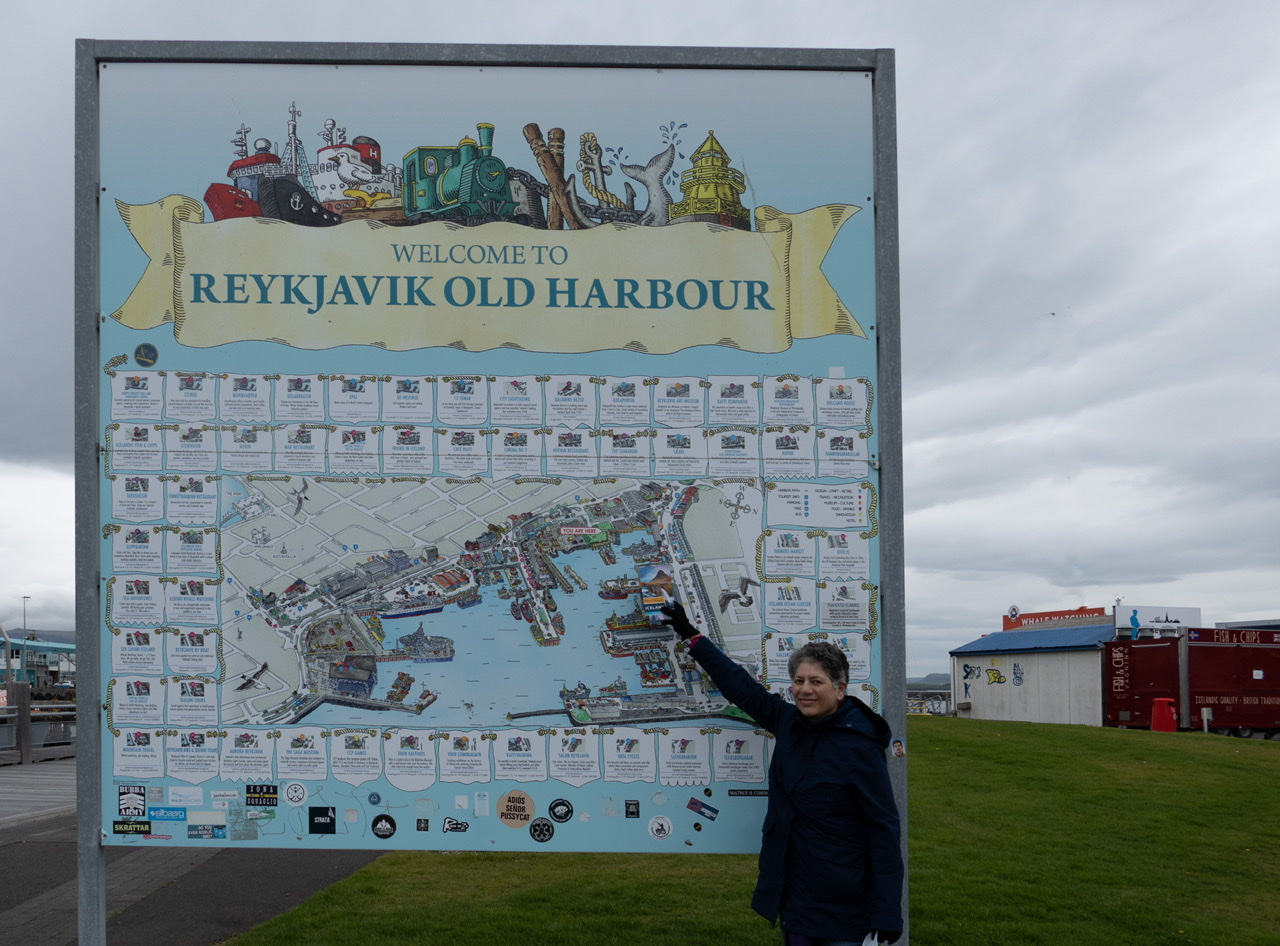 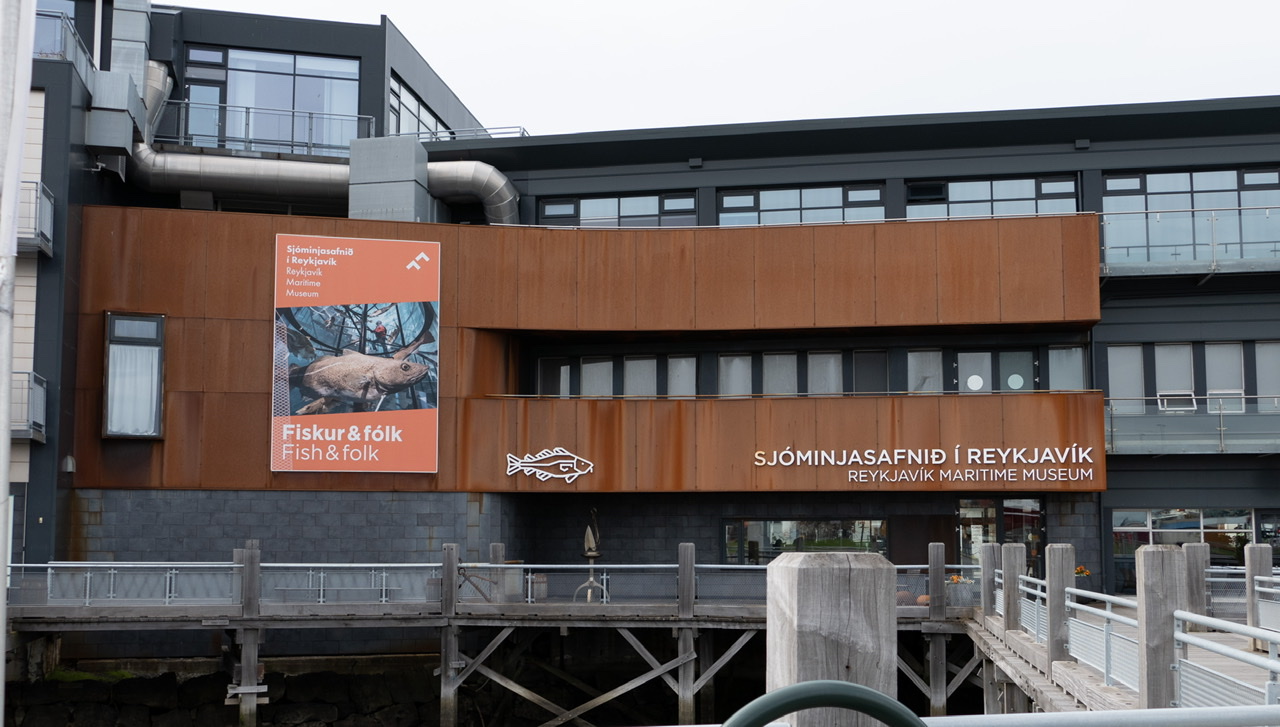 We saw both exhibits at the Maritime Museum – one on the recovery and exploration of the Melckmeyt, a 17th Century Dutch ship that sank while trading with Iceland, and the permanent exhibit about “Fish and Folk”, how fishing shaped Iceland and Icelanders. Both were worth seeing – we spent more time with the permanent exhibit, though. 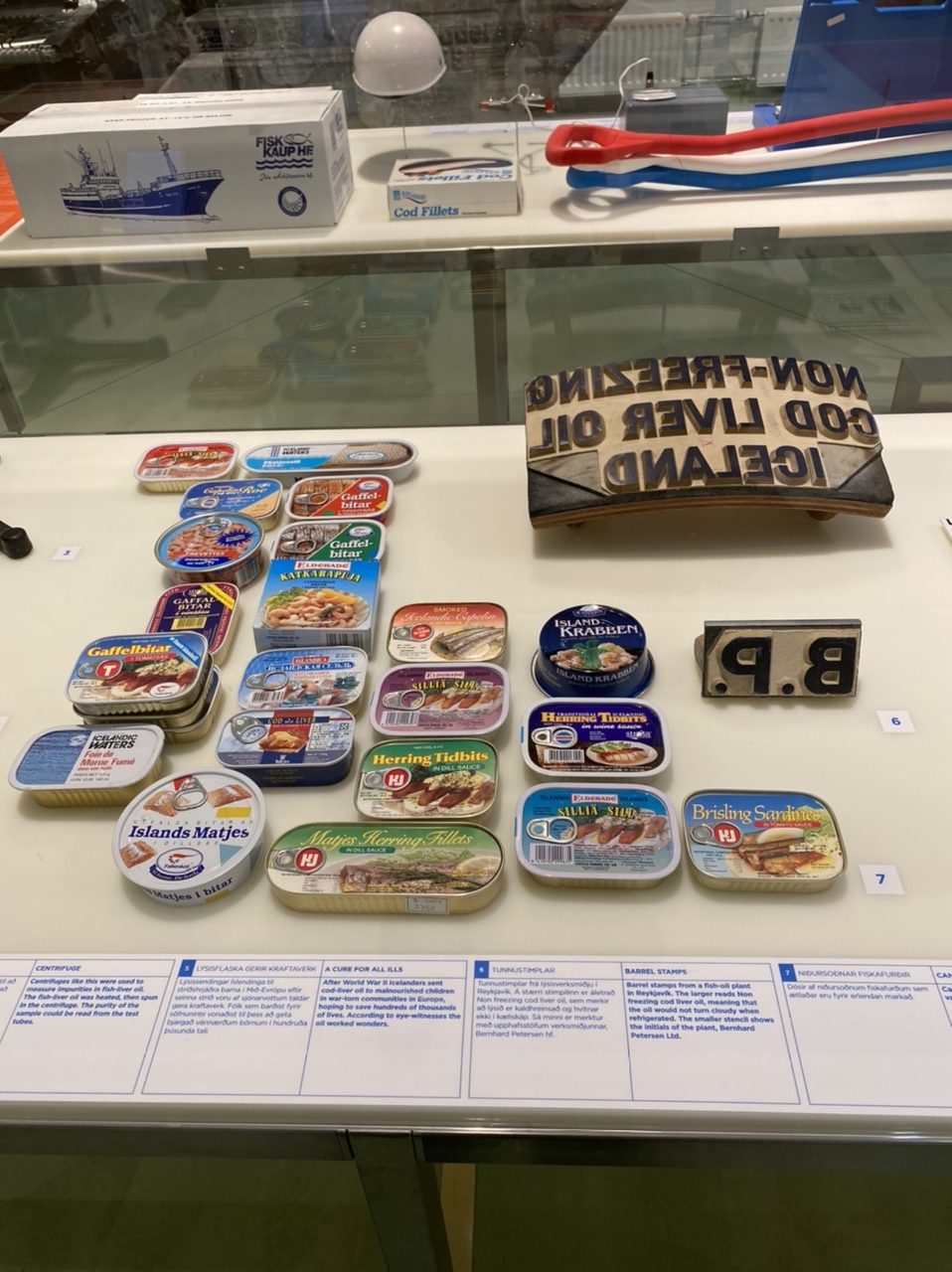 After the Maritime Museum, we wanted fish; our friends had done some research and found Messinn, less than a five-minute walk from our hotel. It was a great catch – their specialty is “fish pans”. Diane had the Atlantic Wolffish and I had the cod with curry and chili – both were excellent. And somehow, we had room for dessert and split a piece of chocolate cake with pistachio ice cream! 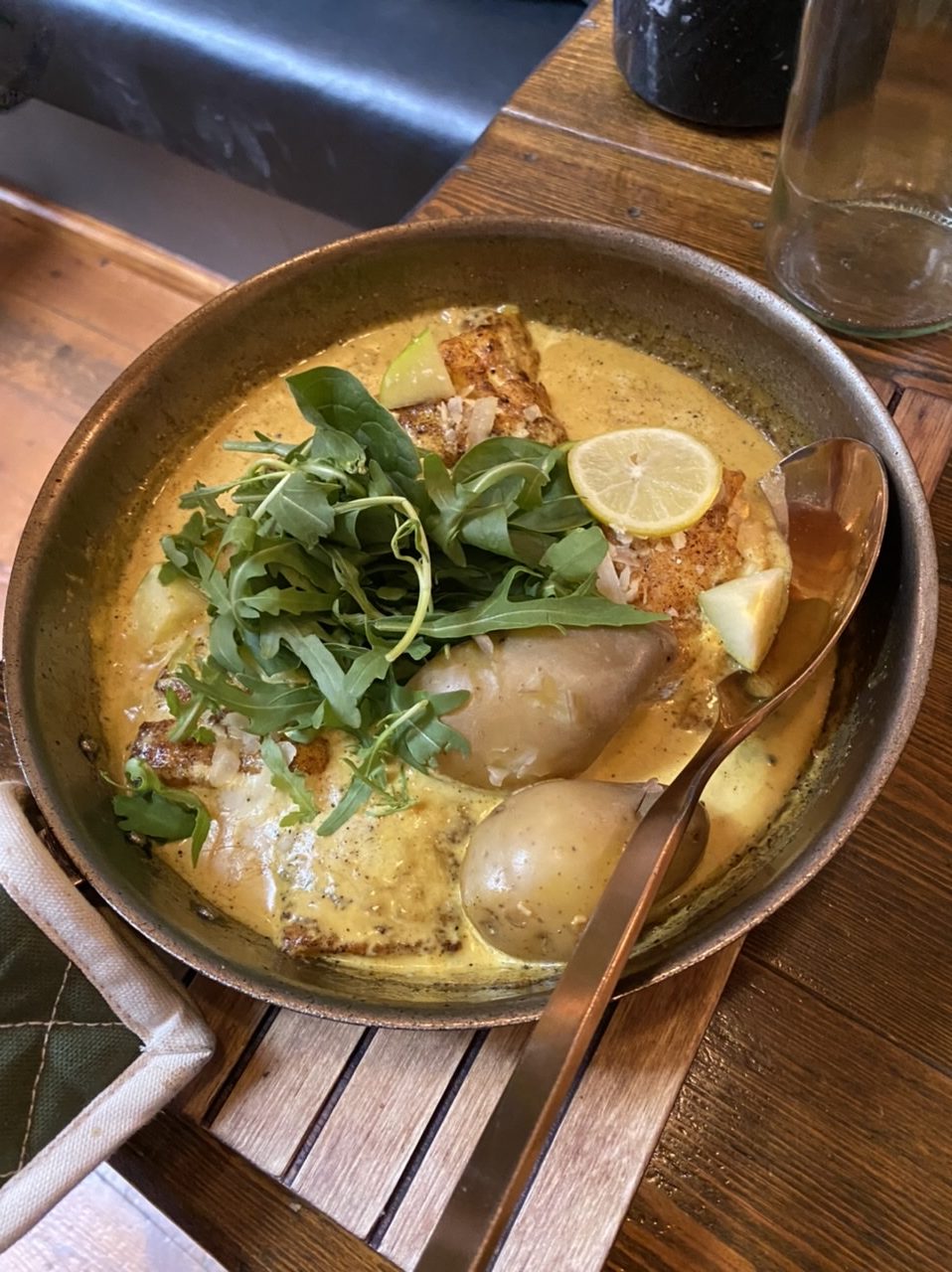 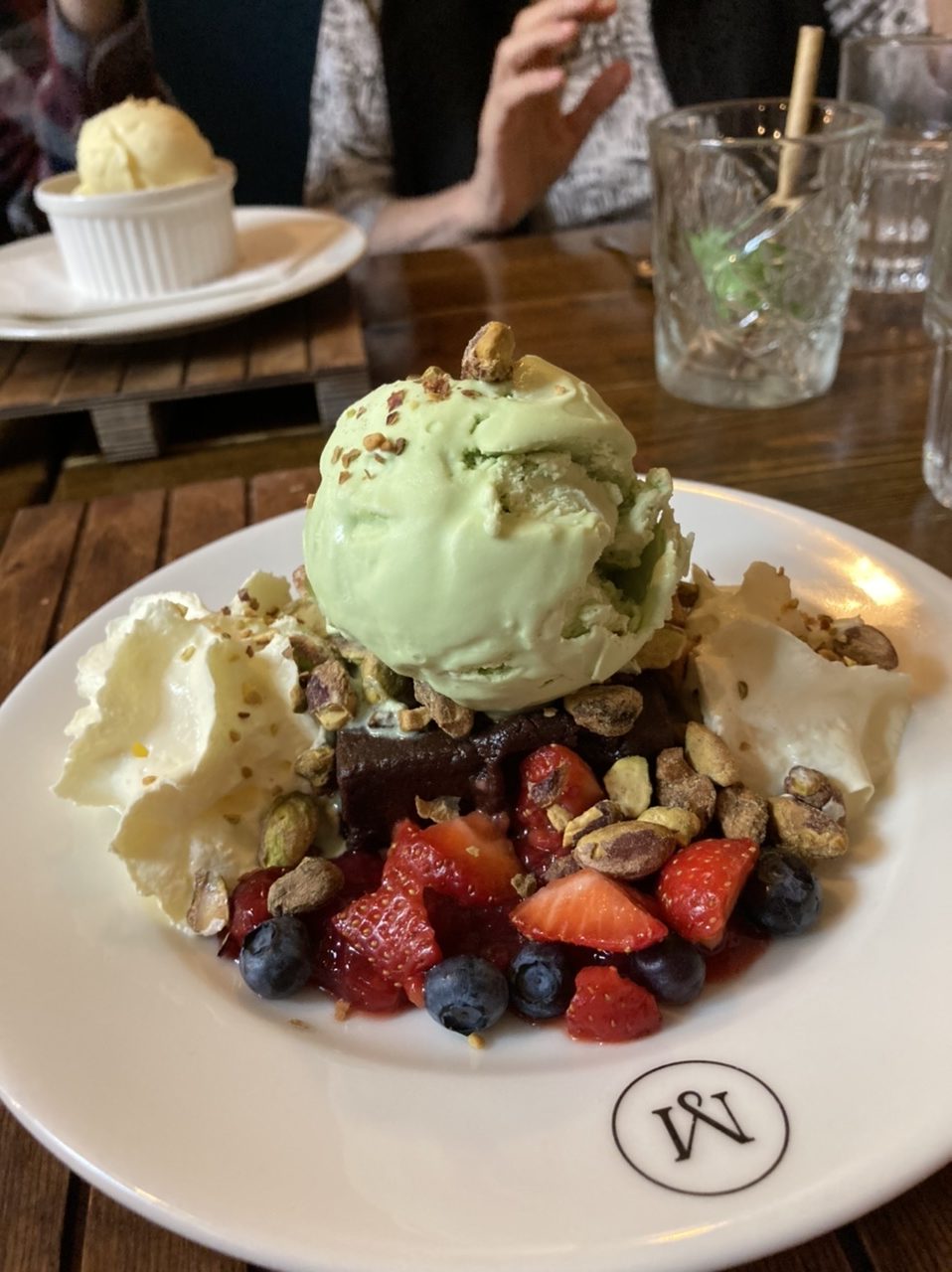 Tomorrow will start early; we leave the hotel at 8am to join the rest of our group for breakfast and a swim at the Blue Lagoon, followed by a tour of the HallgrÃ­mskirkja Church (I’m hoping they include a trip to the tower, since we’ve already seen the rest of the church). The rest of the day will be “at leisure” (which means we get to figure out our own meals – I don’t think that will be much of a hardship).