We were on the bus at 8:30am so we could be the first guests at Drayton Hall, a plantation in the Low Country that was founded in 1738. It’s the only plantation house on the Ashley River to survive the Revolution and the Civil War, and was donated to the National Trust for Historic Preservation by the Drayton family in 1976 when a new generation inherited the property and decided they didn’t want to live there because it was lacking modern conveniences like indoor plumbing and electricity! 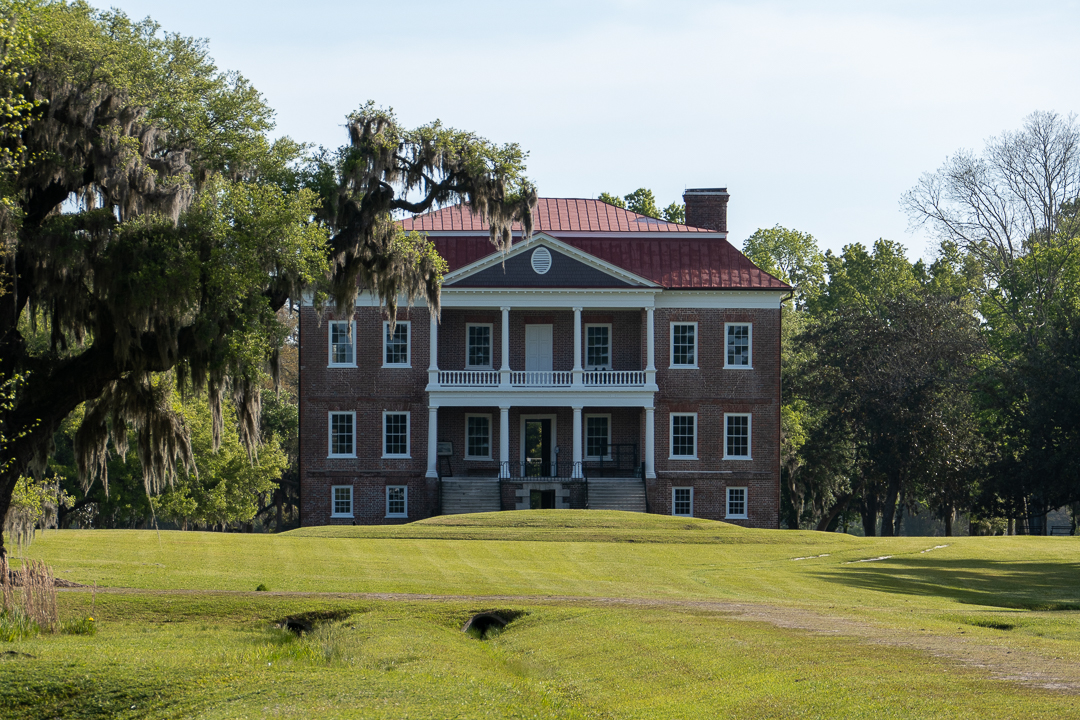 We were met at the visitor center by our guides for the morning, Carter Hudgins (the CEO) and Eric Becker, the Manager of Landscapes and Horticulture (our tour was sponsored by the National Trust, so we got VIP treatment). Eric gave us a quick tour of the garden at the visitor center and explained their philosophy on the landscape throughout the estate. 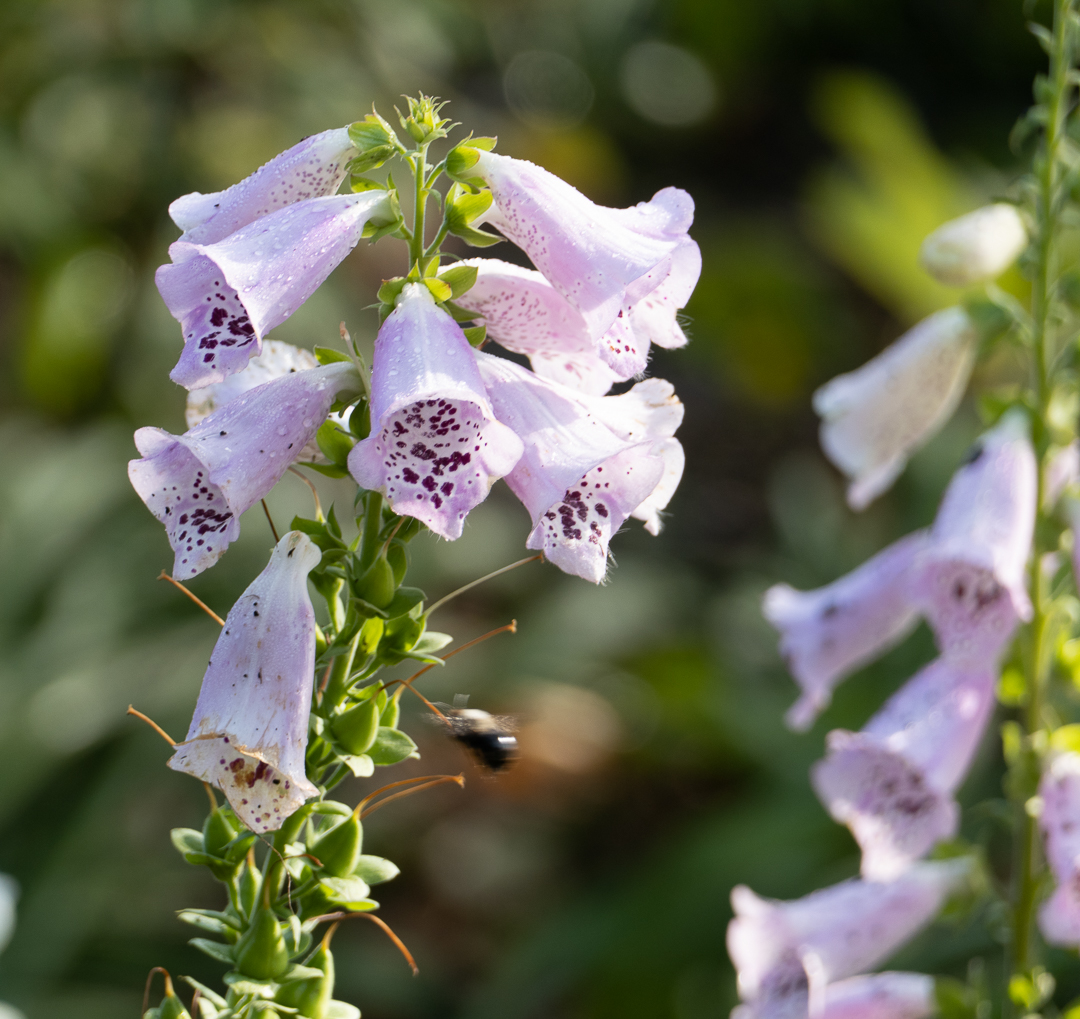 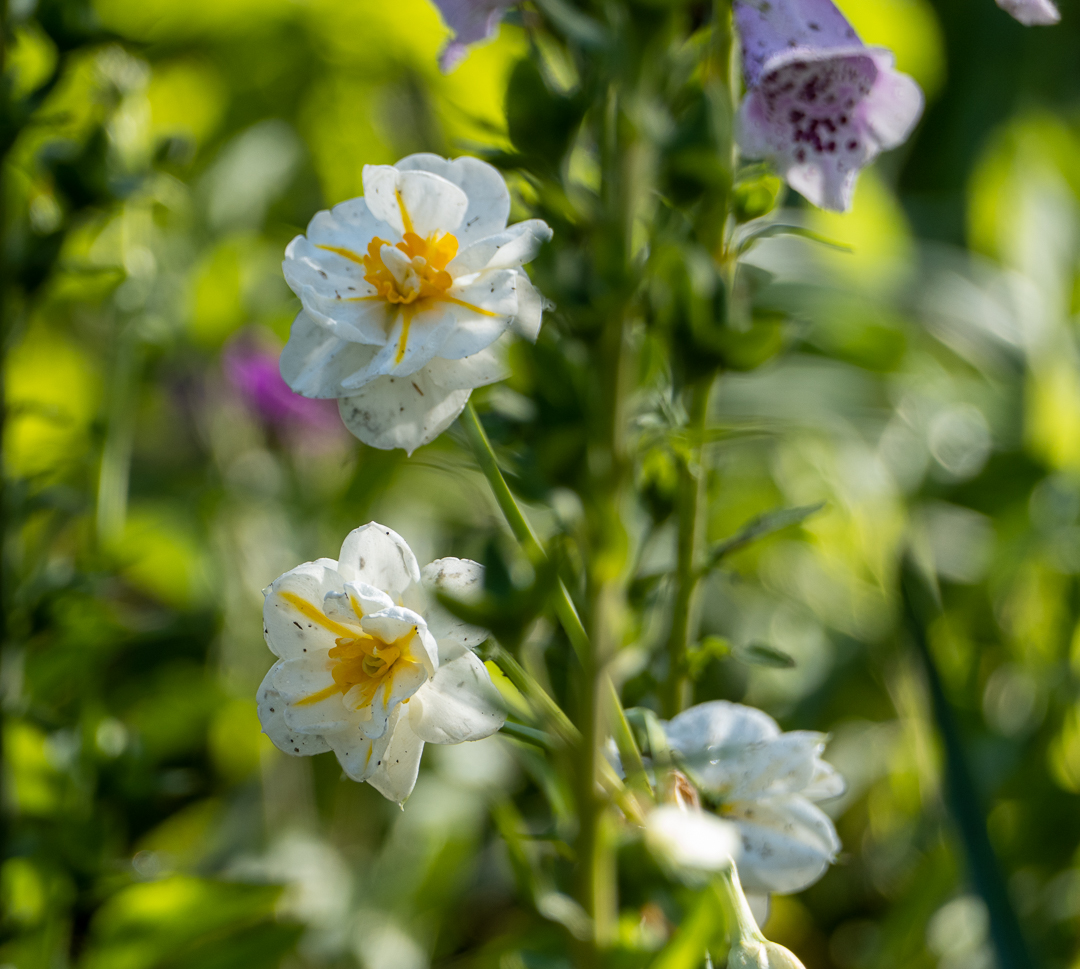 Carter then took us to the house itself, which is under active conservation – they’re currently repairing the staircases, so we could only visit the rooms on the first and second floors. 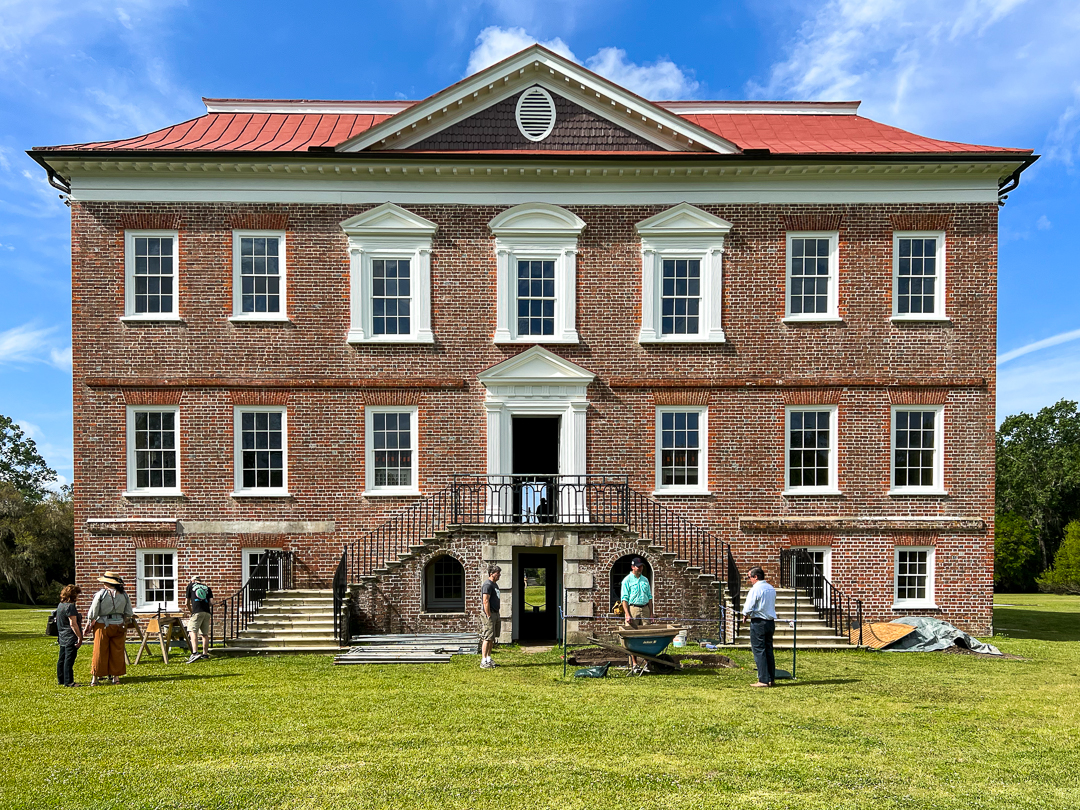 We looked at all of the rooms on the first floor, where most visitors would be received. Drayton Hall has the only hand-carved plaster ceiling in the country, as well as a Rumford fireplace in the rooms which served as the office and library. 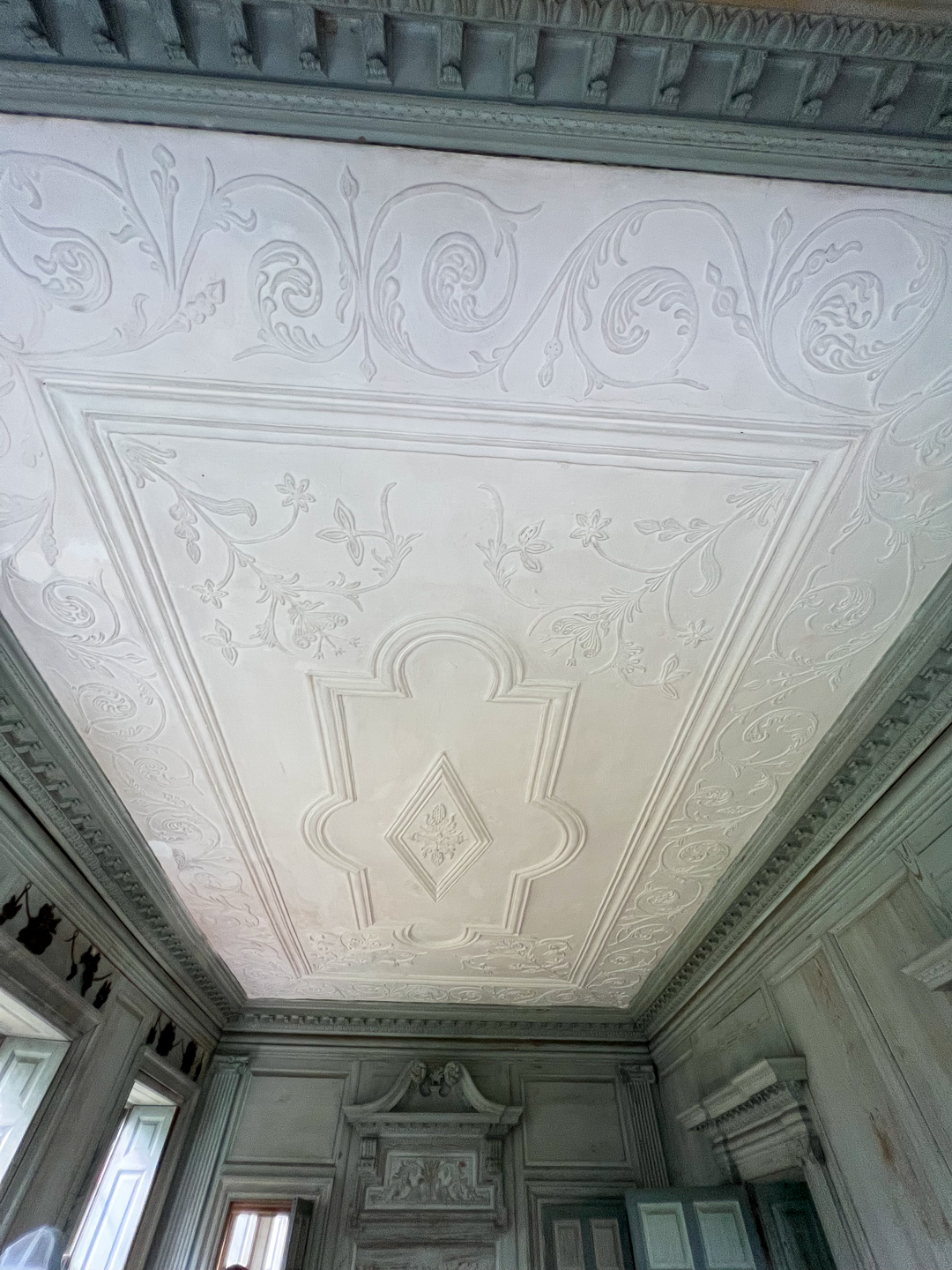 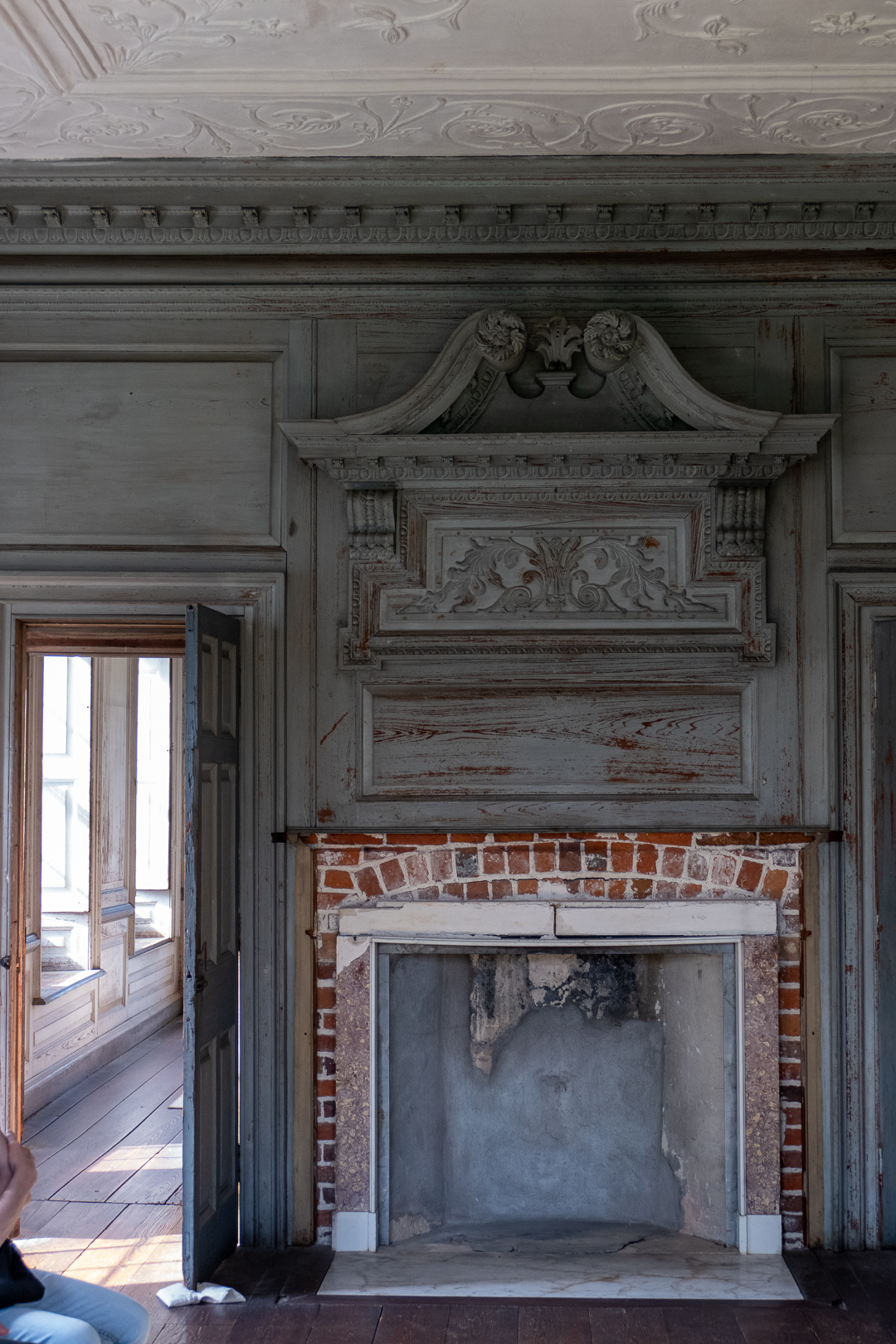 He talked about the choices they made to conserve the property as they received it in 1976 versus restoring it to an earlier period; one big question about restoring is the choice of period – should it be 1738, when it was built, or the Victorian era, when it was painted white, or some other time or mixture of times?

After the house tour, I went down to the Ashley River to enjoy the view, both of the river and of the house. 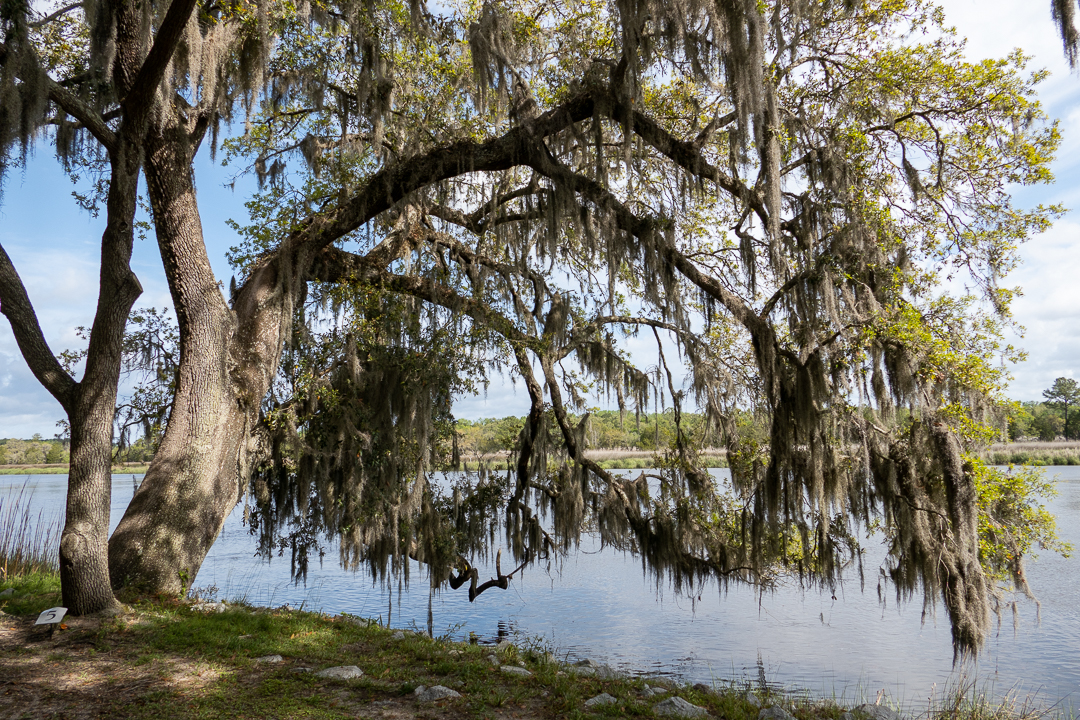 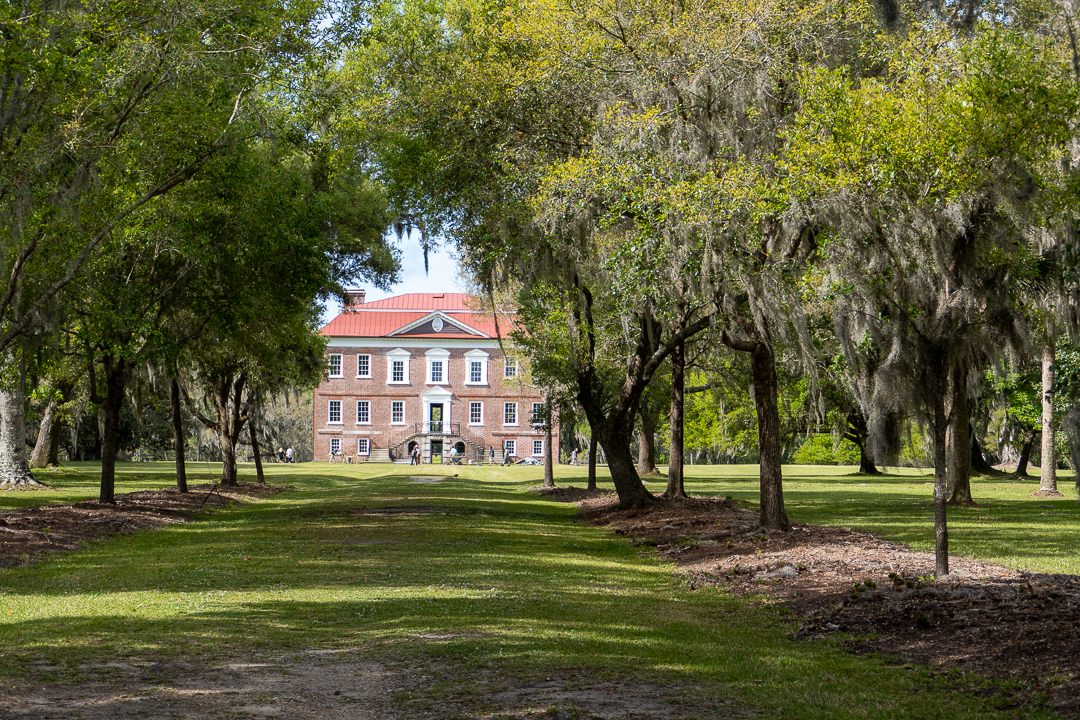 And then it was time for a brief visit to the gift shop before getting back on the bus for our second plantation, Middleton Place. Middleton is the seat of the Middleton family; they made their fortune from rice cultivation. Rice is a labor-intensive crop, and that meant slave labor; there was a lot of discussion (not defense) of slavery during our visit, and it was evident in many of the exhibits.

Middleton was the first landscaped garden in the United States, patterned in some ways after Versailles, so it was only natural for our Study Leader, John Meffert, to lead us on a garden walk. We started at the Reflection Pool, which boasts fountains, alligators, and turtles. 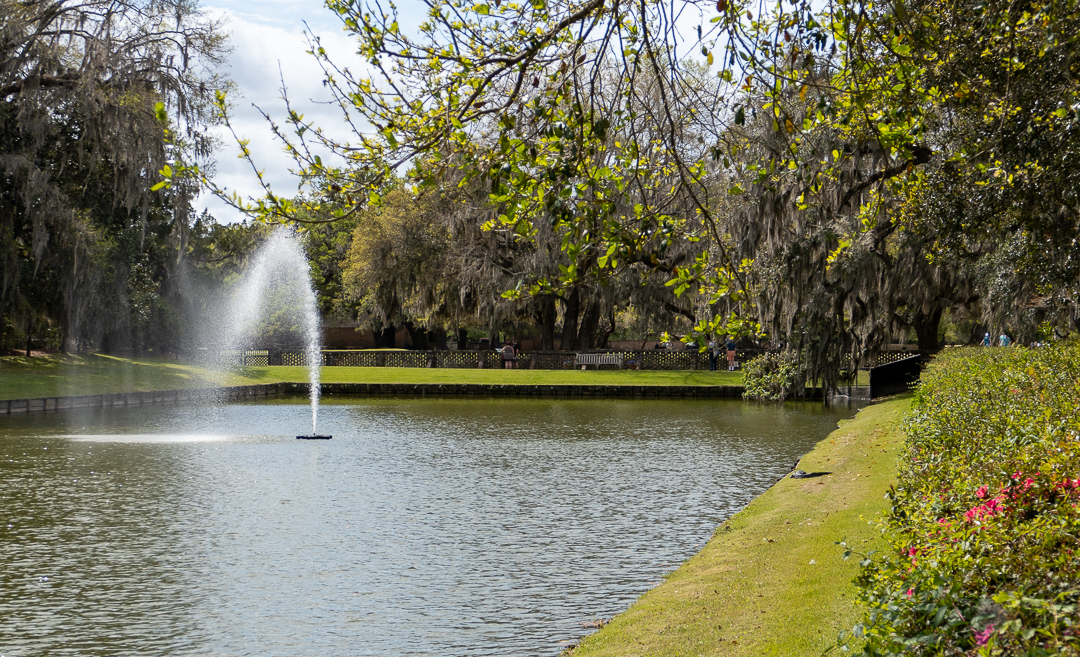 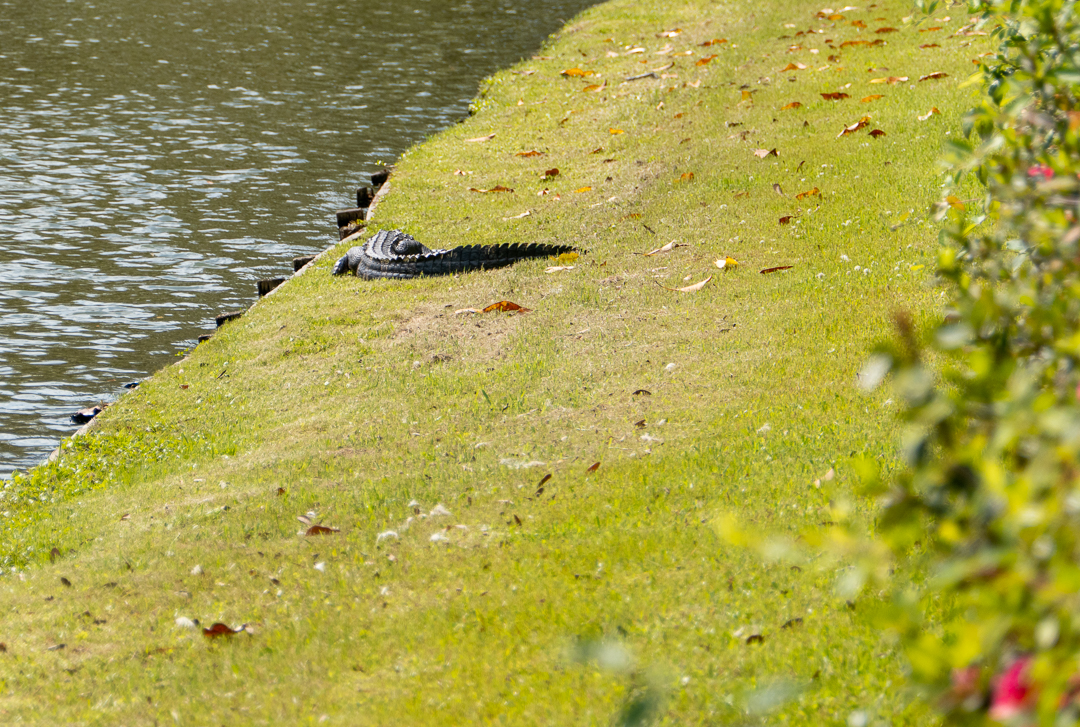 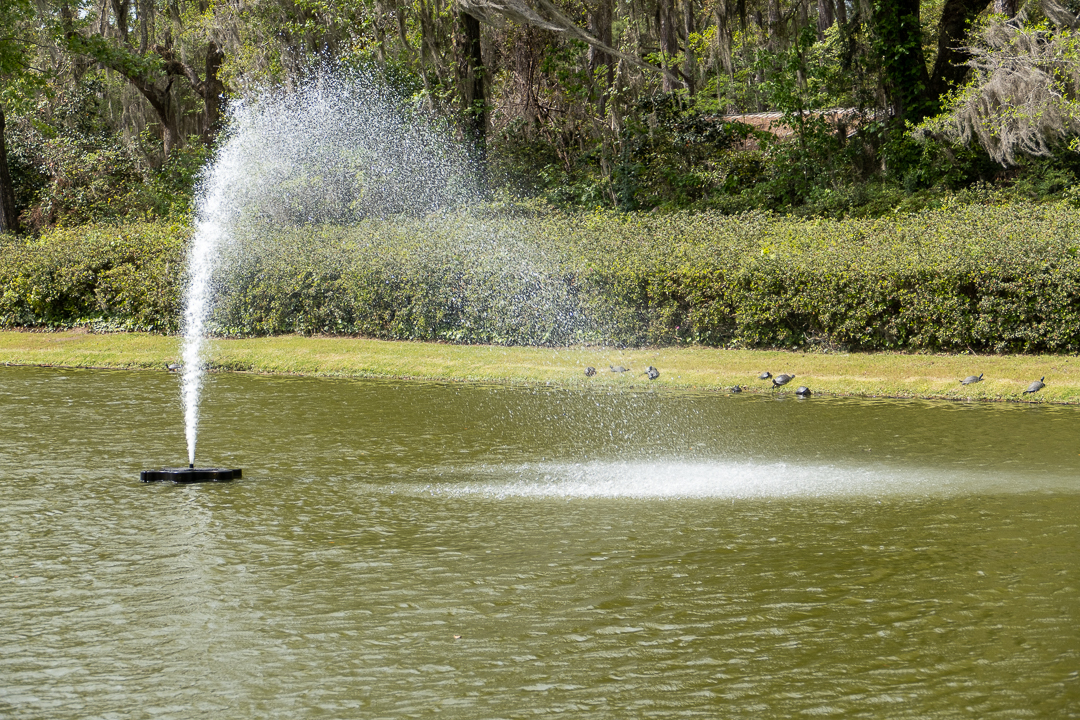 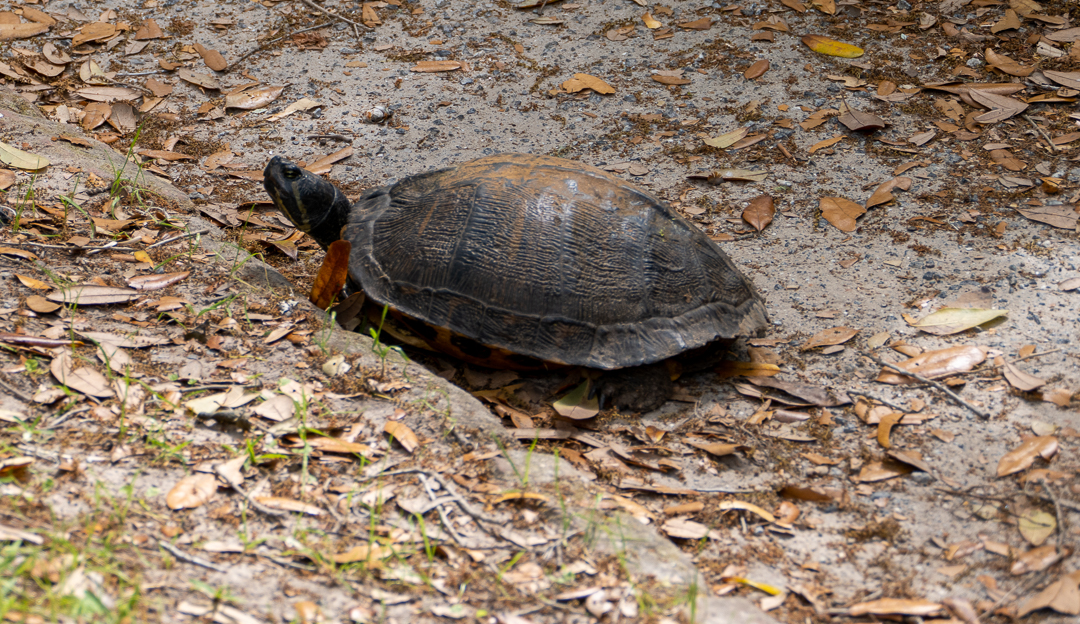 The gardens have quite a bit of sculpture scattered about, mostly Italian (some donated by the Italian branch of the family, who chose not to return to South Carolina when they were in line to inherit the plantation), like this wood nymph. 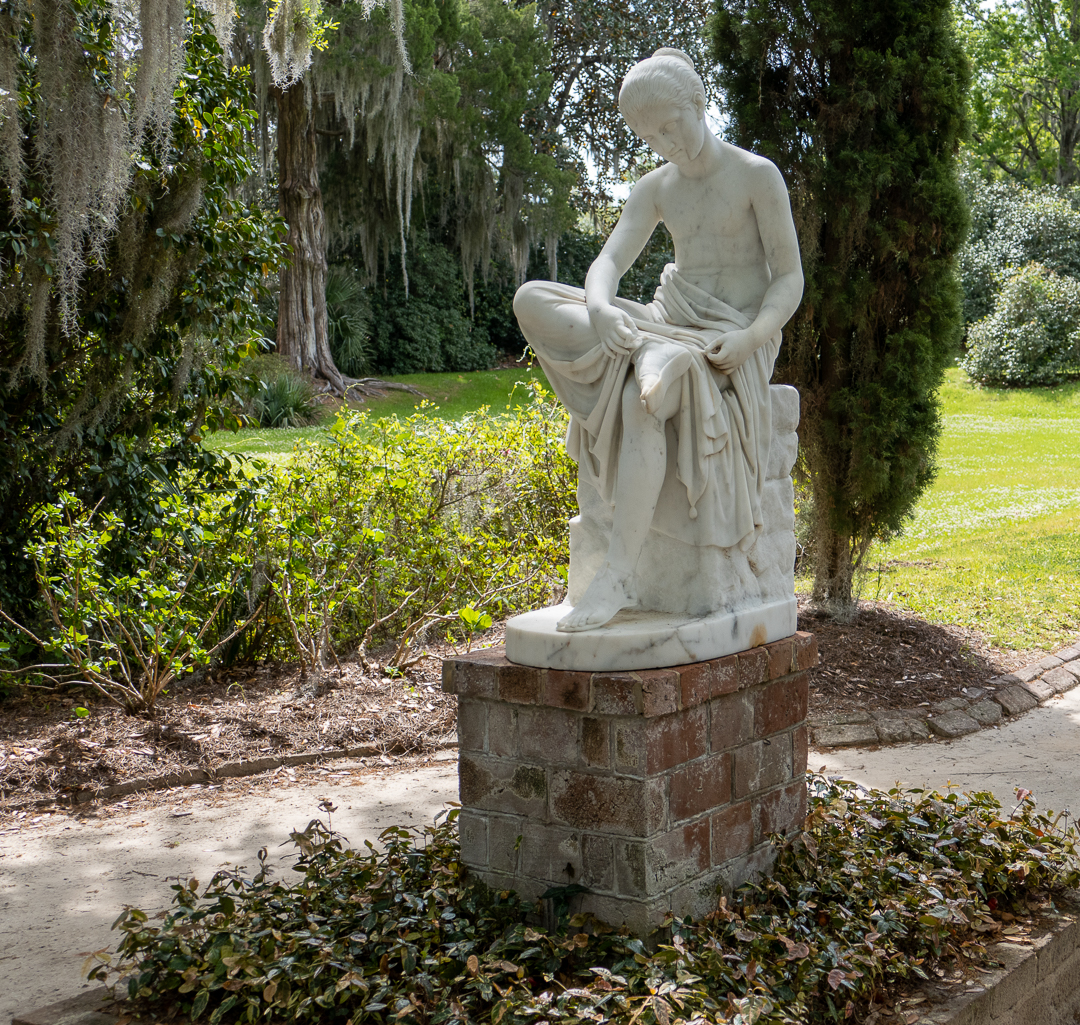 After our garden walk, it was time for our tour of the House Museum. Originally, it was the “south flanker” of the three-building main complex; all three buildings were burned during the Civil War, but this was the least damaged, and the Middletons restored it and moved into it in 1870. The other two buildings collapsed completely during the Charleston earthquake of 1886.

The museum has been almost entirely furnished with authentic Middleton-owned furniture and clothing (some of which was buried during the war); some of it is on loan from other branches of the family, so photography wasn’t allowed – our docent was very thorough and informative. We were on a “Behind the Ropes” tour, so we were able to go into some of the normally off-limits rooms; the docent even showed us the actual clothing that Henry Middleton (the founder) wore for the Benjamin West portrait that was on display in the house.

After lunch, we had a little time to explore the outdoor exhibits, including Eliza’s House, a freedman’s cabin from the 1870s, where I met another Middleton – he was descended from people who the Middletons had enslaved and was looking at his own history.

And then it was back on the bus for a quick driving tour through The Citadel, South Carolina’s Military Academy. There was a competition of some sort happening on the field we drove around – but it was hard to see because the field was lined with military equipment like this jet! 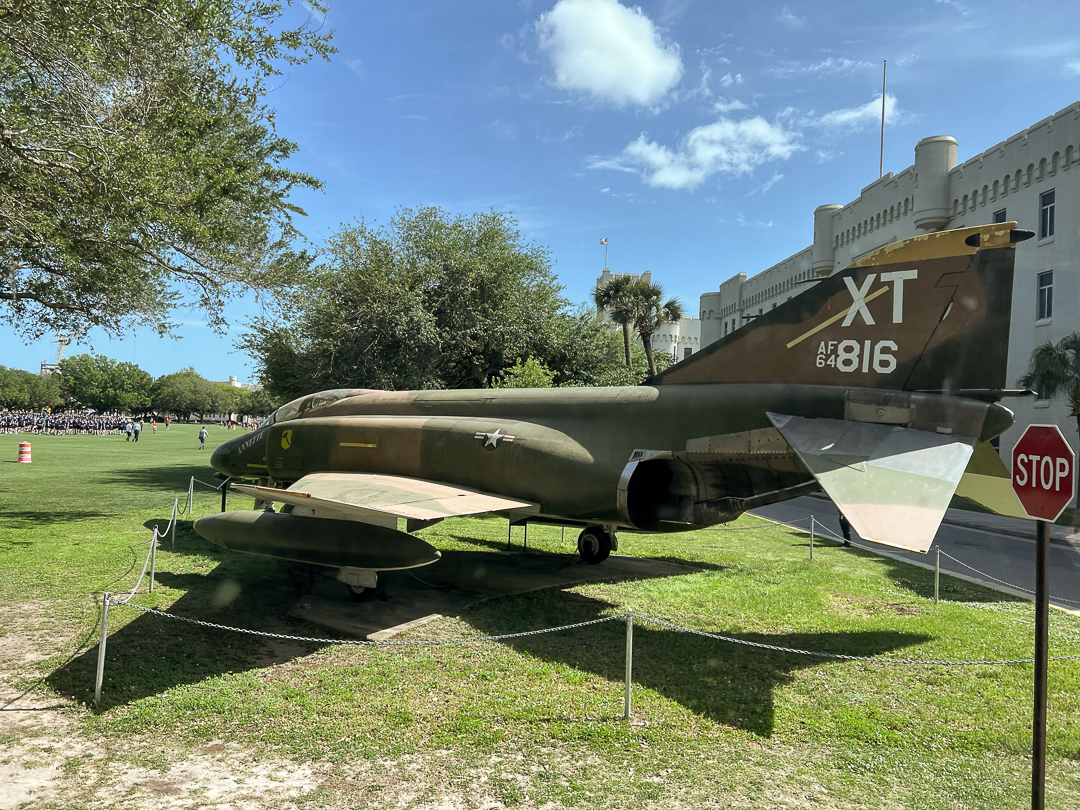 The Charleston Holocaust Memorial is in Marion Square, about a block from the hotel; Diane and I walked over there after the bus tour. It’s very simple, based on the use of a tallit (prayer shawl) as a burial shroud. I thought it was very moving and far too relevant. 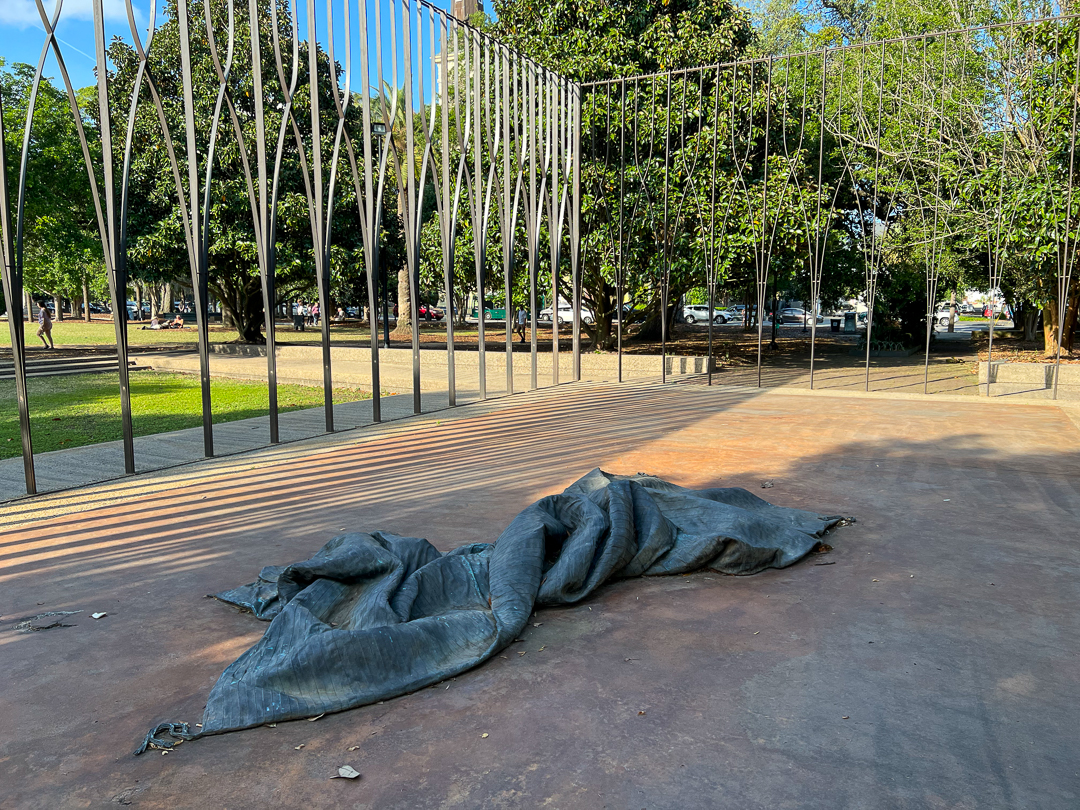 One thought on “Mostly Plantations”