The Princeton Area Walkers offer four Volksmarches in New York City – today, we did the one closest to our hotel, Midtown Manhattan.

The walk started at Bryant Park with a glorious view of the Empire State Building in the distance. 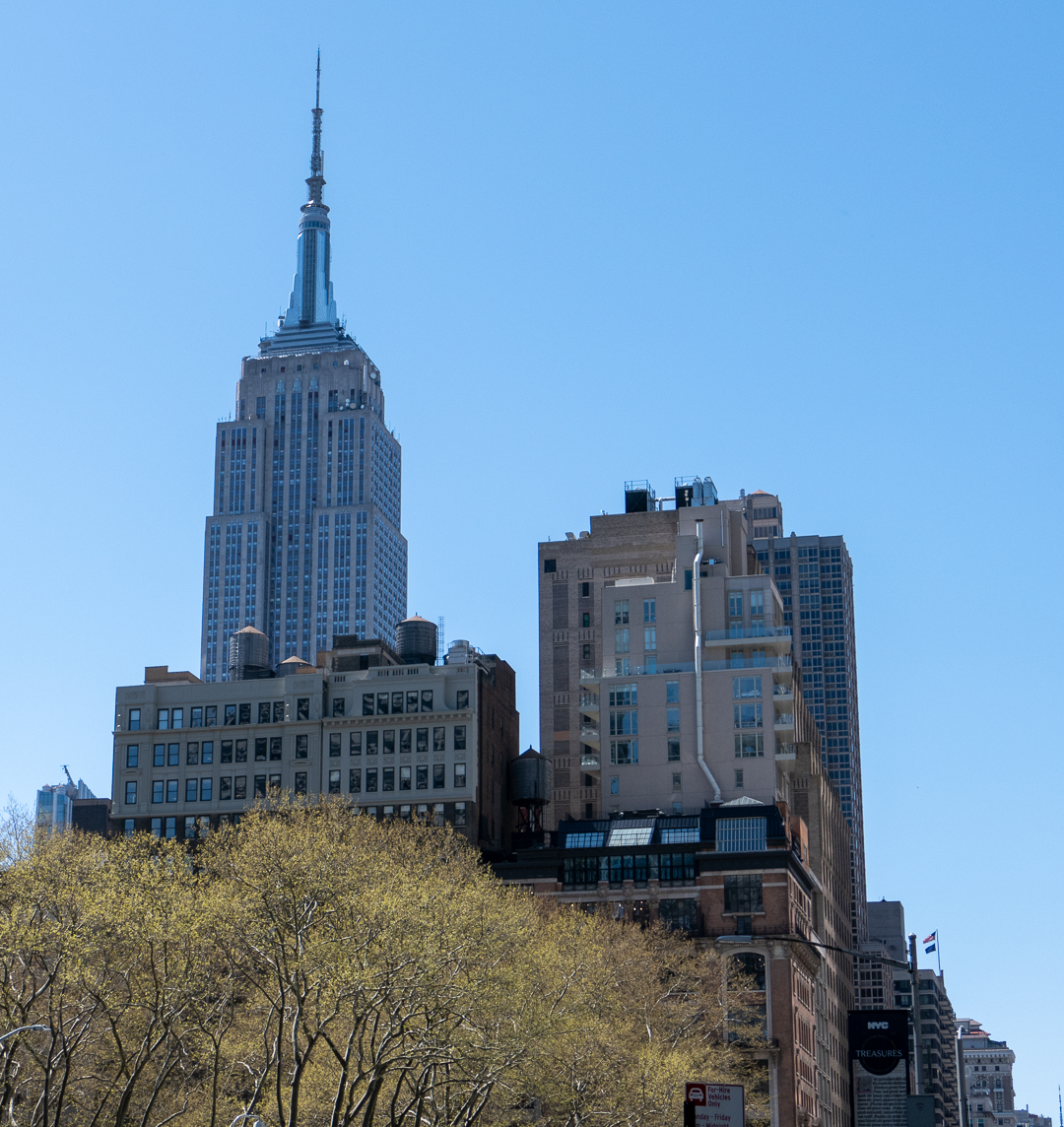 Bryant Park itself was well-supplied with flowers, especially tulips. 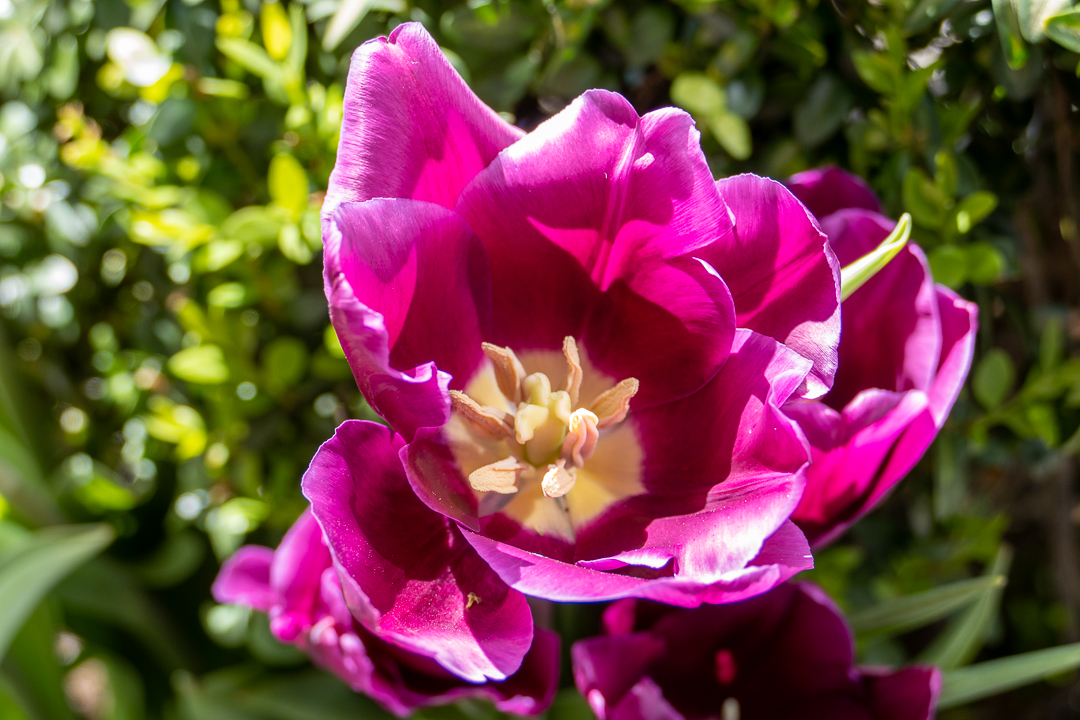 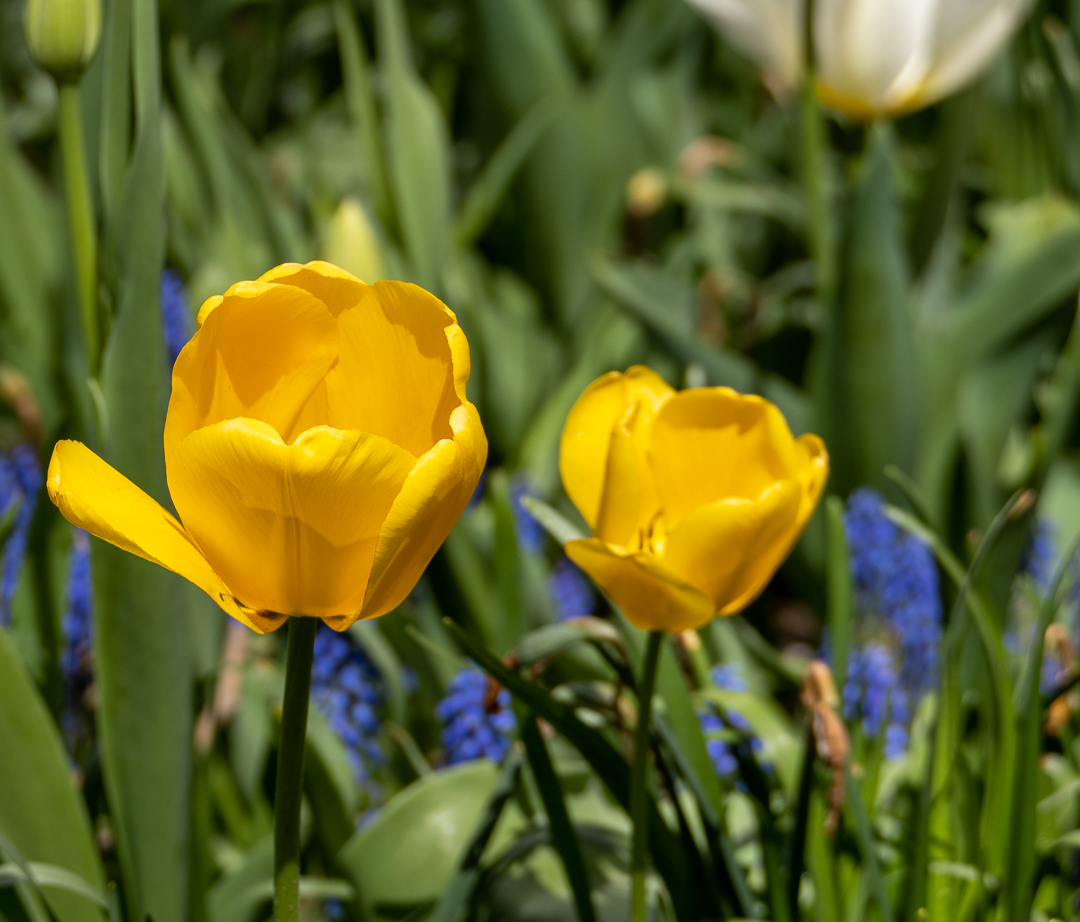 Even though the New York Public Library wasn’t on the walk route, we couldn’t resist visiting Patience and Fortitude (not seen in this picture).

And how could we resist visiting the Treasures of the New York Public Library exhibit?

The exhibit covered a wide range of topics – such as a poster advertising Houdini, the first printing of the Declaration of Independence, and a nice photo of the Moon taken just a few miles from home (using the 36-inch telescope at the Lick Observatory on Mount Hamilton – I don’t think my camera can compete). 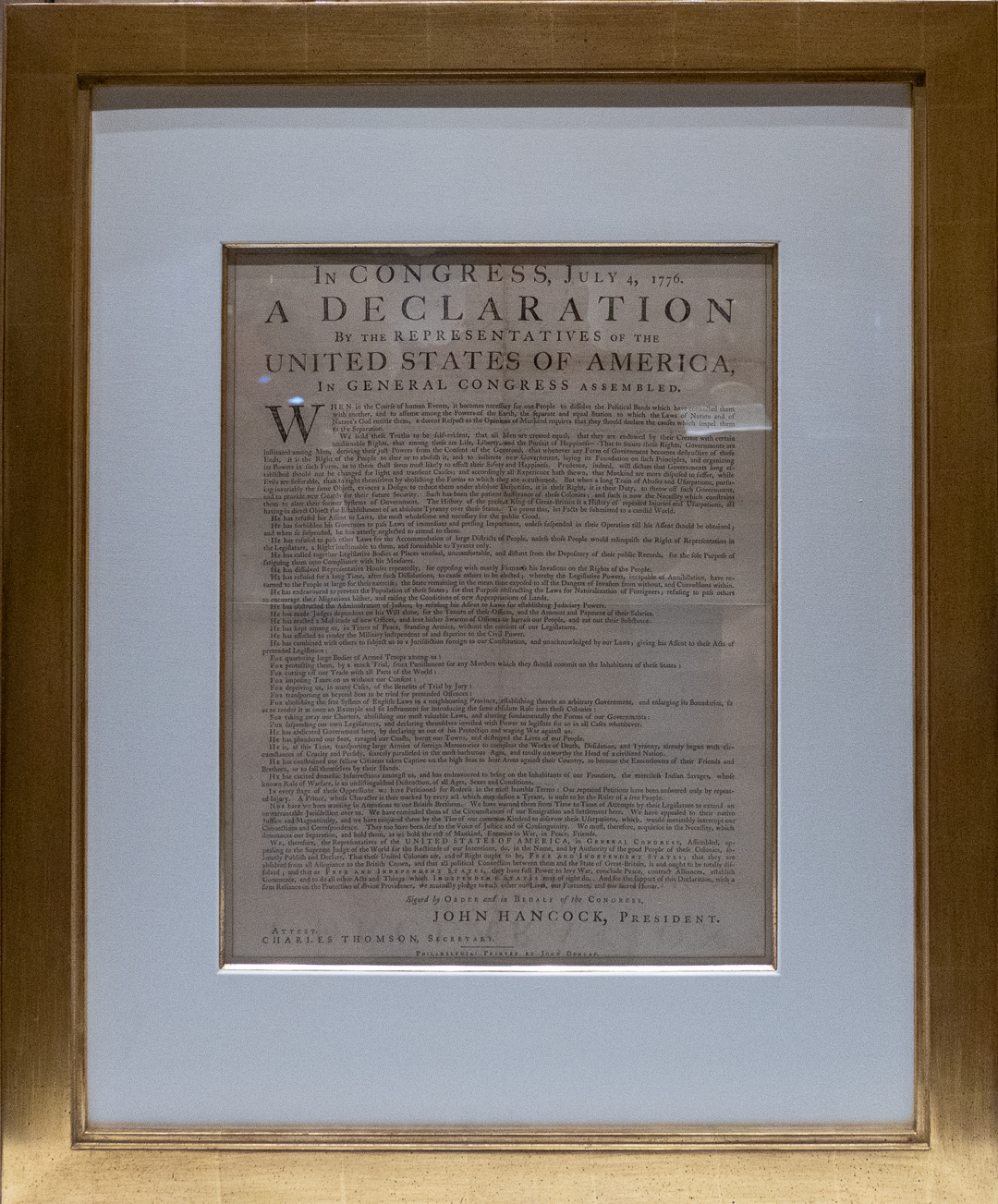 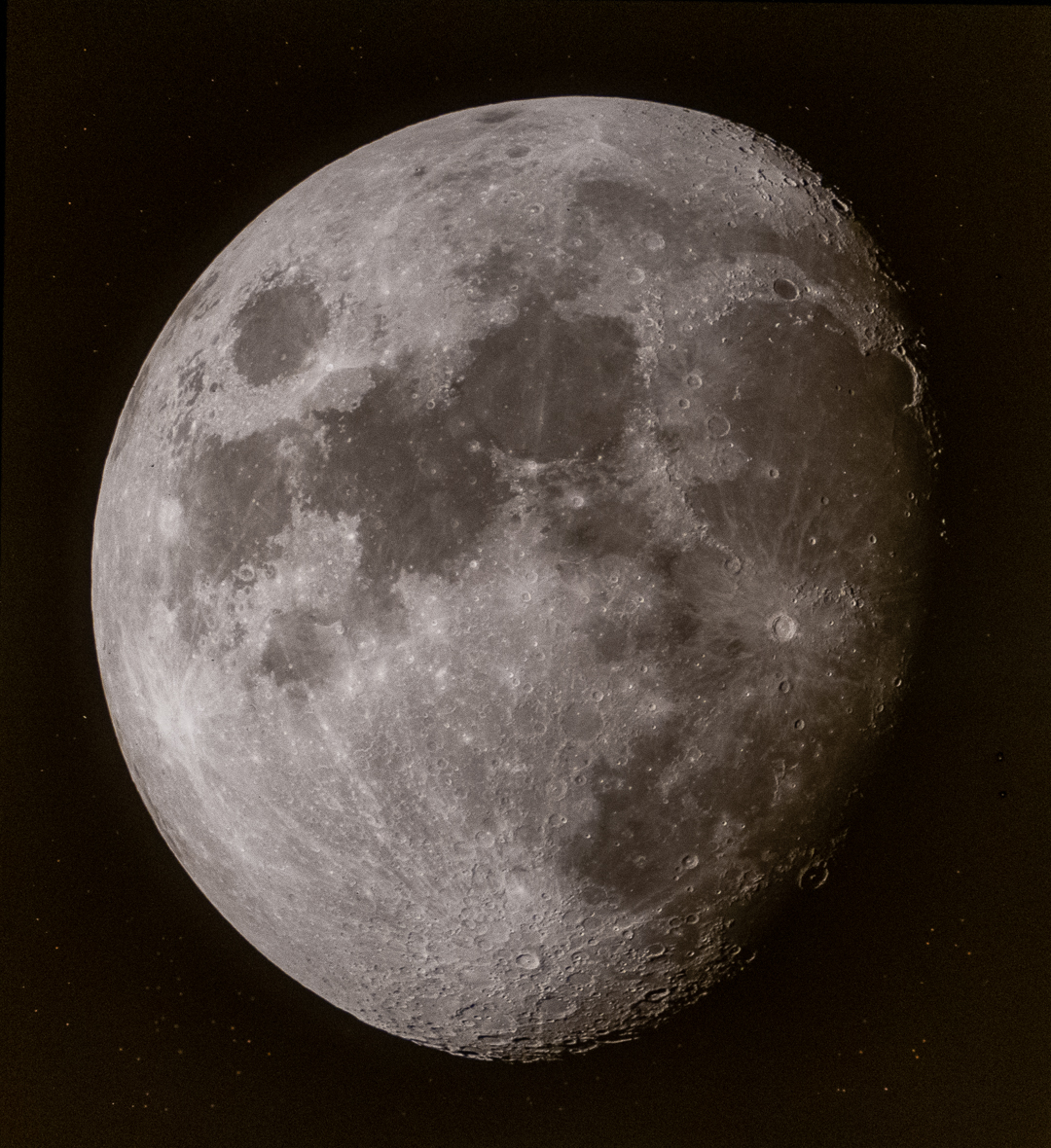 I really liked the exhibits on “Belief” including an original King James Bible and a good bit of Judaica, like this Megillah (for Purim), 18th Century Haggadah from Munich (for Passover), and the 1946 “Survivors’ Haggadah” used in the Displaced Persons camps, also around Munich. 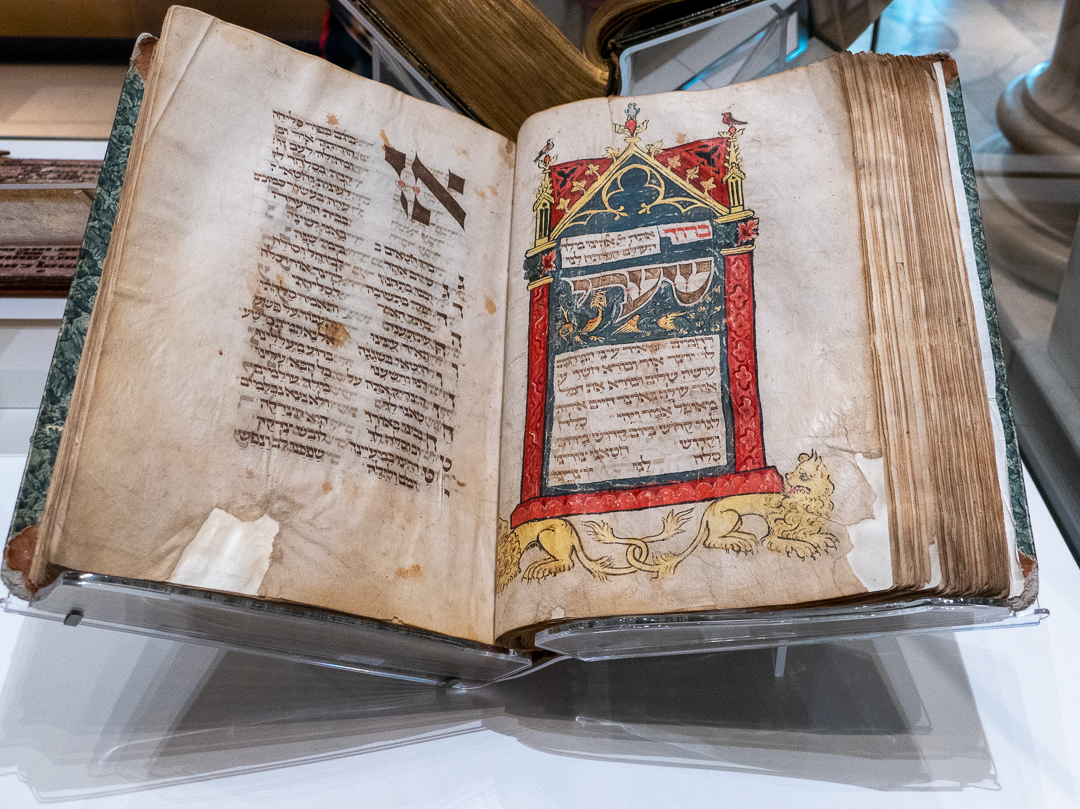 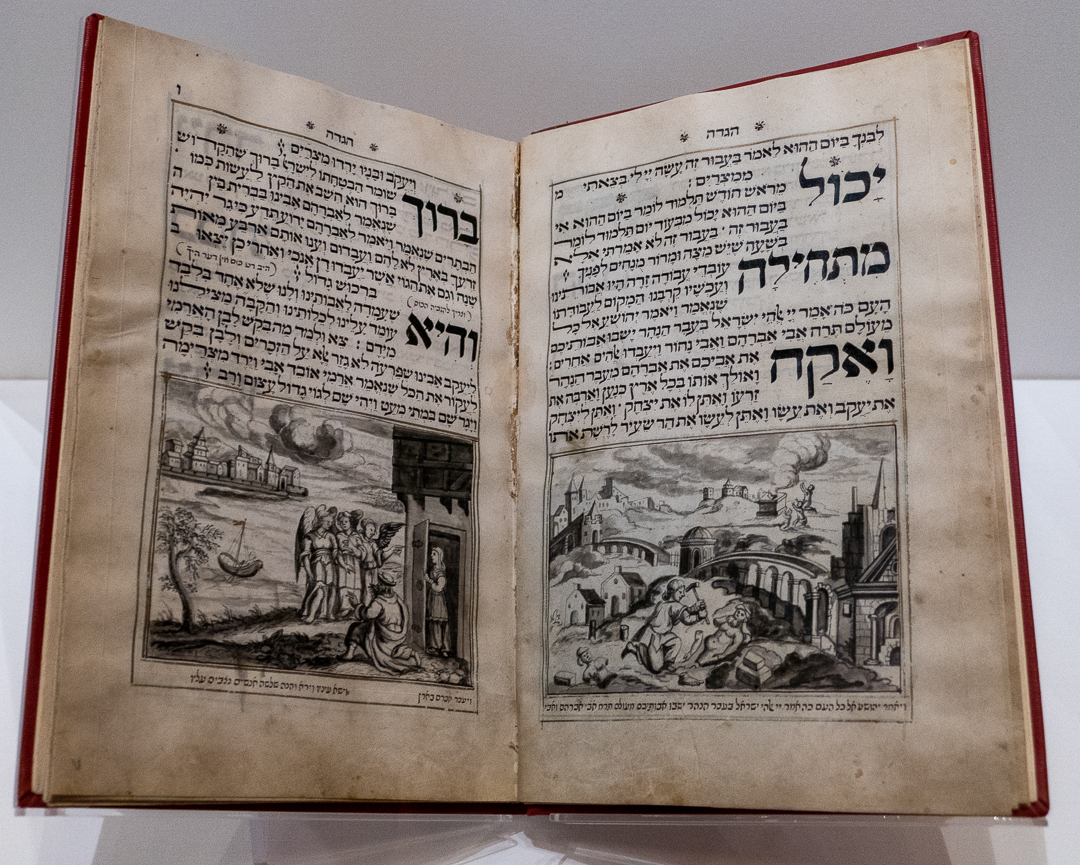 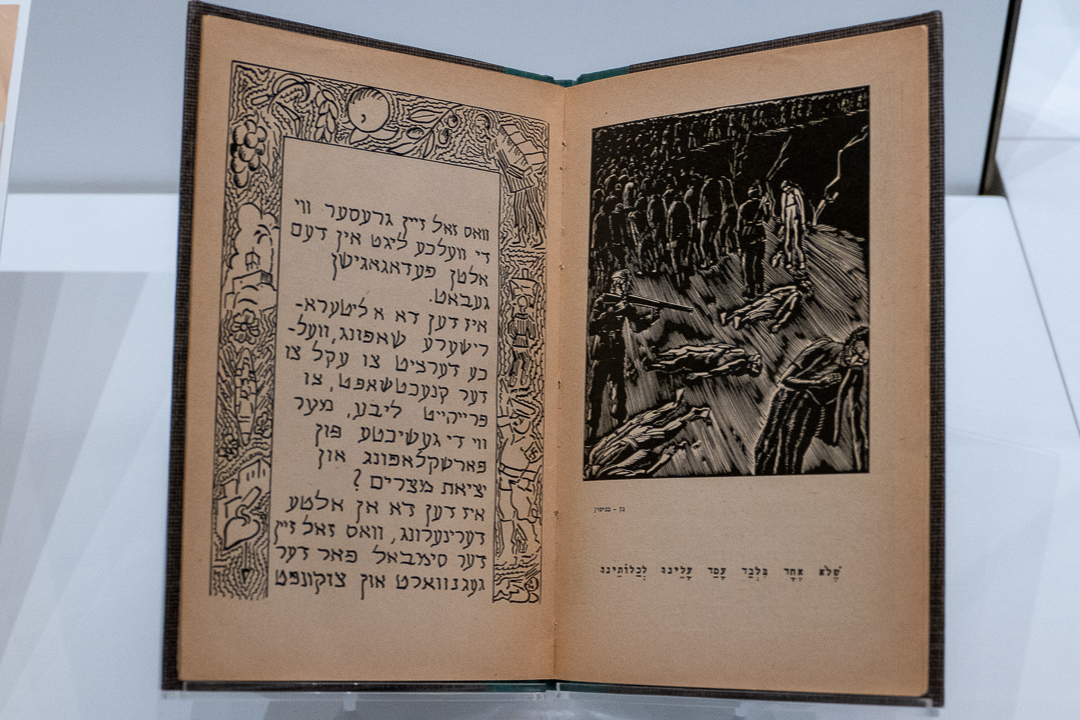 By the time we left the library, we’d been “walking” for over an hour and hadn’t even gotten to the second step in the instructions! It was time to pick up the pace, but on our way to the next stop (Grand Central Terminal), I got a nice view of the Chrysler Building. 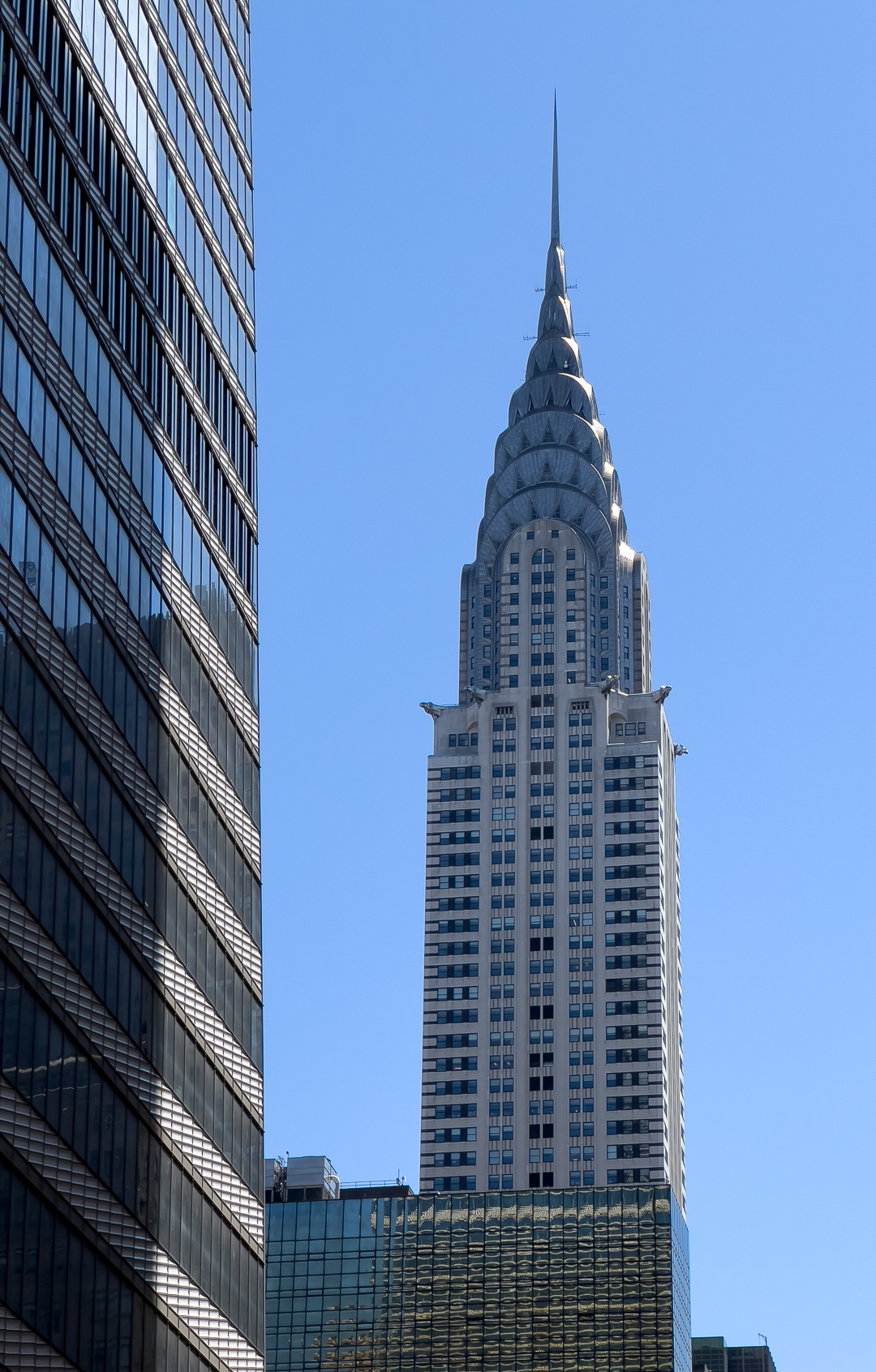 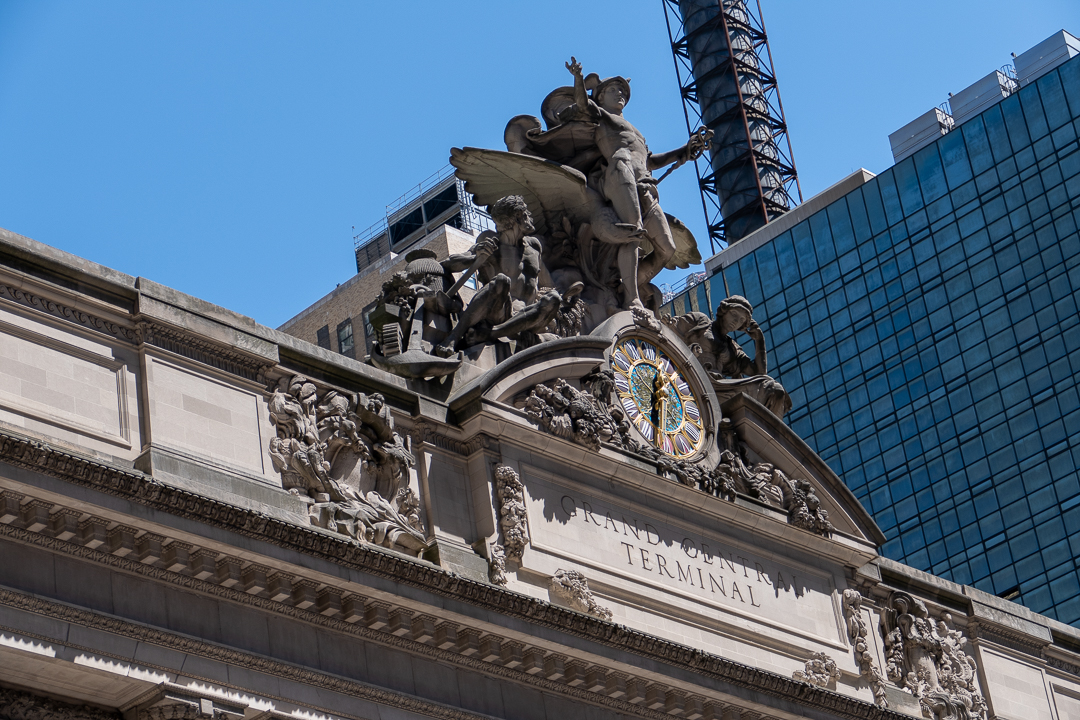 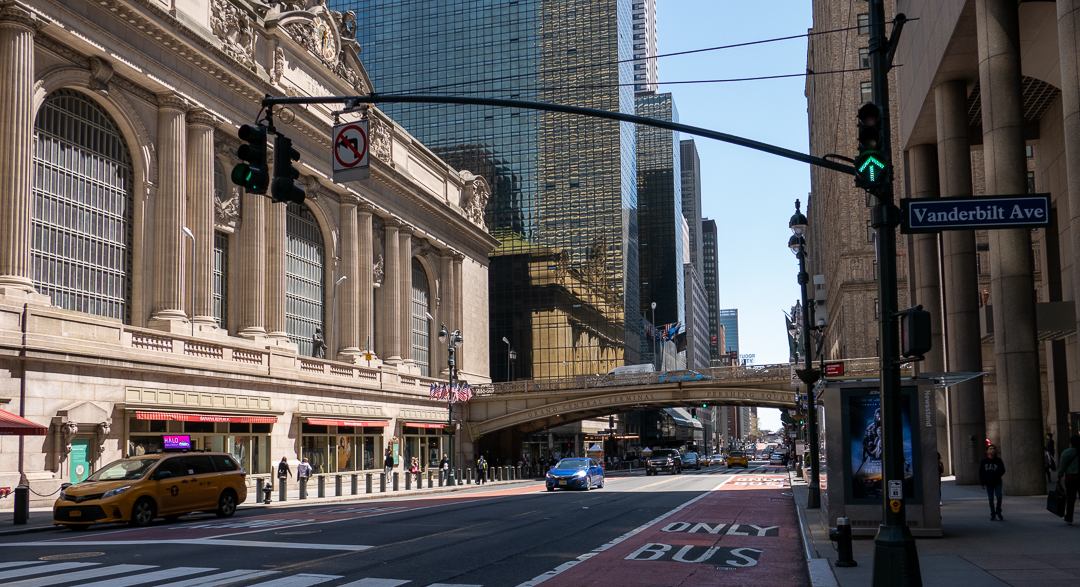 We’d taken a walk through Grand Central on Tuesday, so we made short work of it today, with only the briefest of stops to admire the Apple Store…oops, I meant the view from the Apple Store! 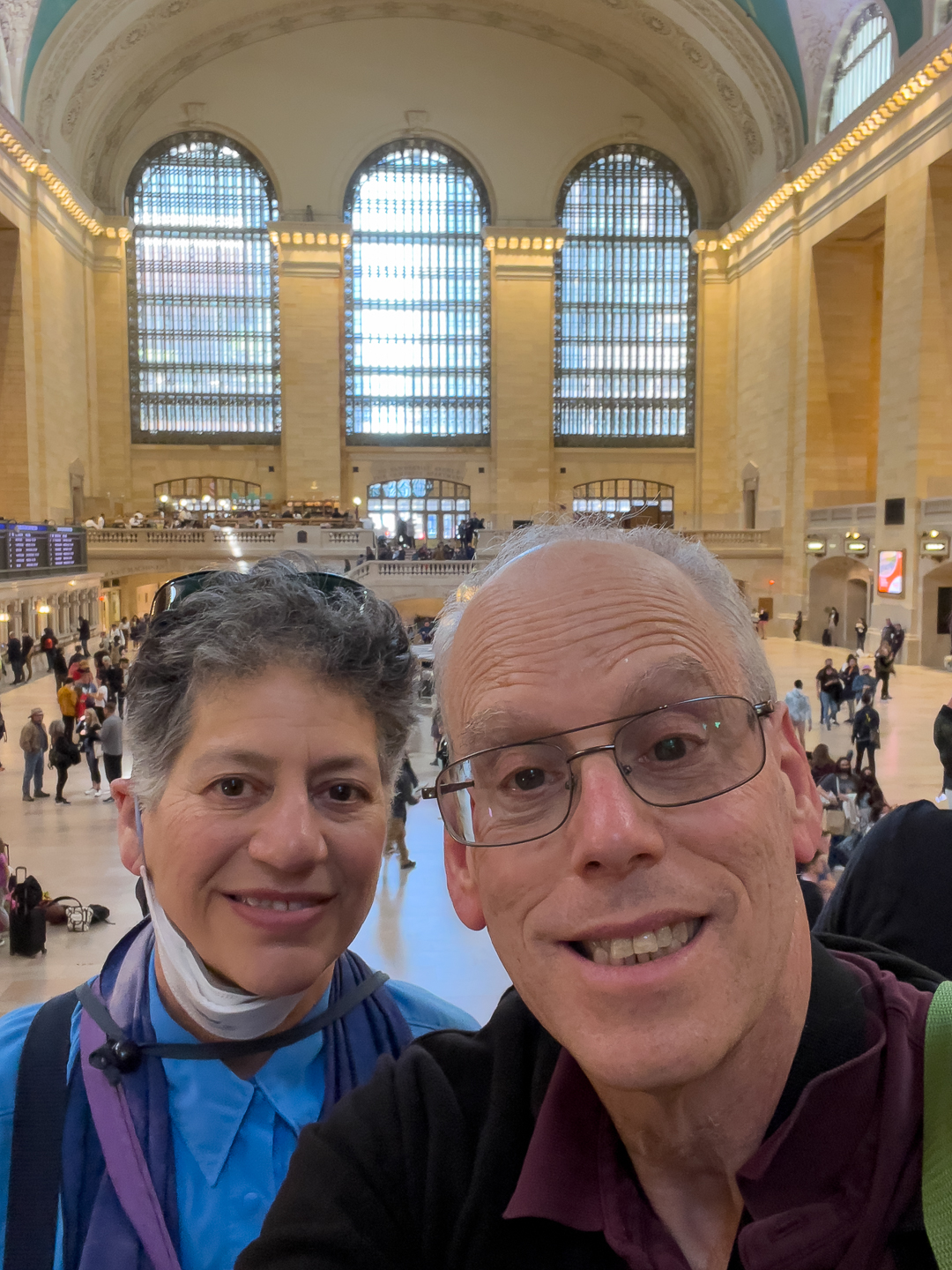 The walk took us back to 42nd Street and on to the UN. Trees were in bloom all around the complex – which seemed appropriate on Earth Day. 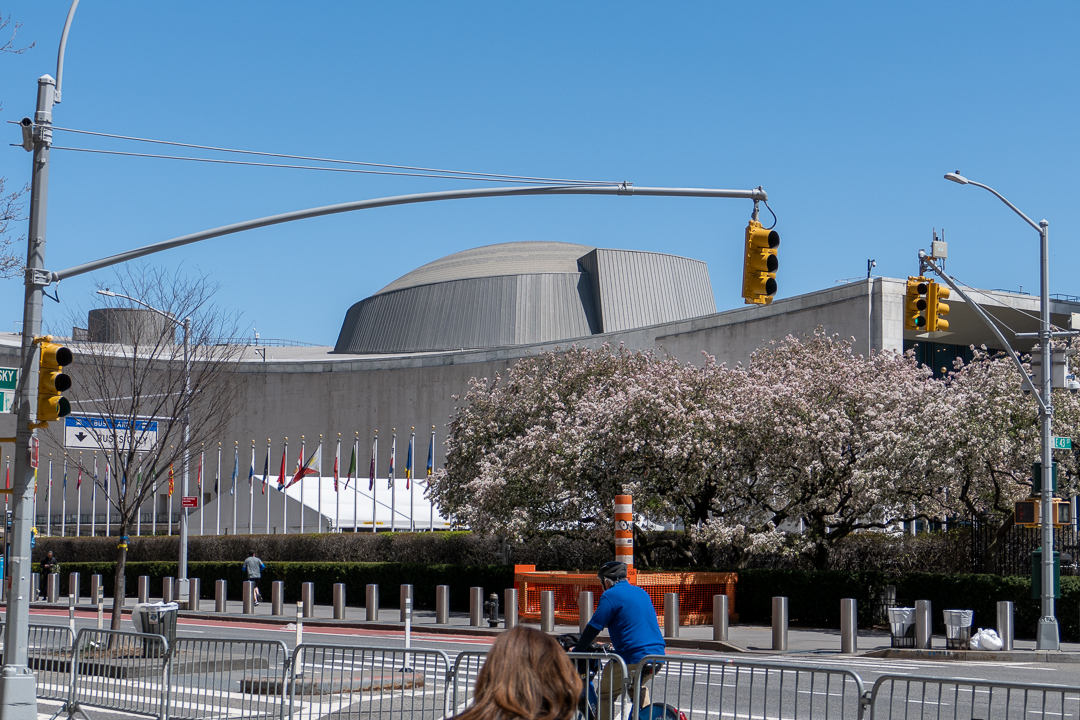 We had lunch at the Morning Star Cafe on 2nd Avenue; I had fond memories of the place (under a different name) from my 10 weeks in New York for IBM Systems Research Institute in 1980. I’ll try somewhere else next time.

We walked up 50th Street to Rockefeller Center, getting a nice view of St. Patrick’s glowing in the sun. The skating rink at Rockefeller Center used to be a winter-only facility, but that’s changed. 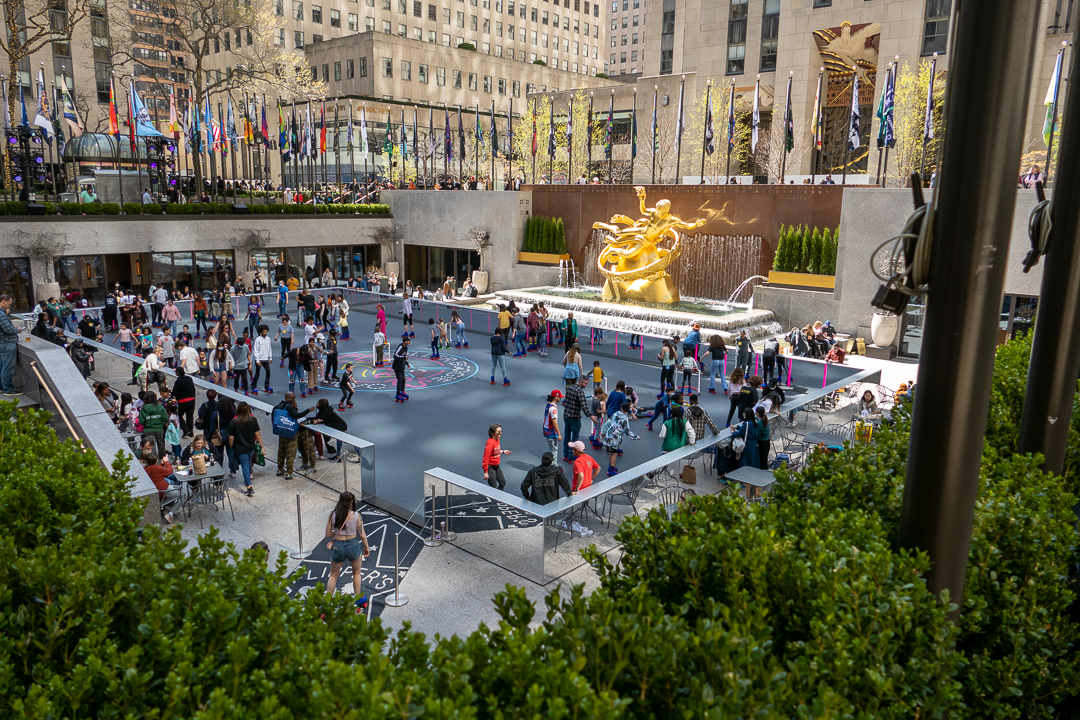 The plaza was ringed with flags for Earth Month, and there was an explanation at the entry to 30 Rock, our next stop. 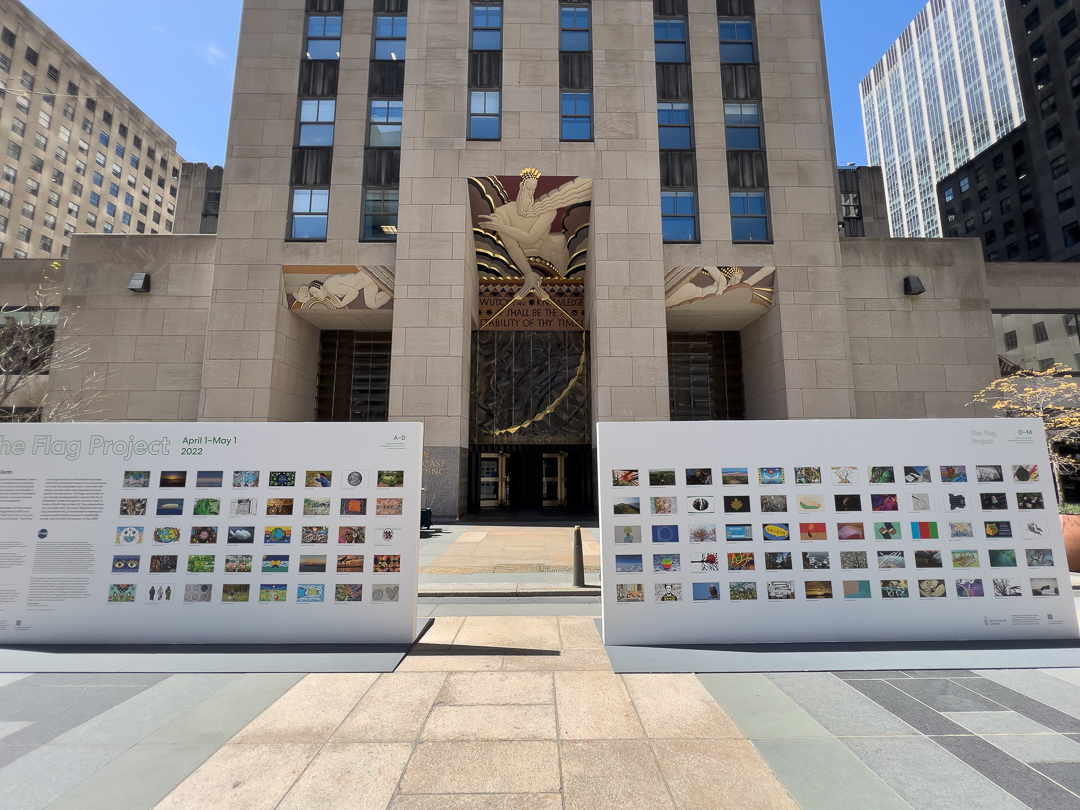 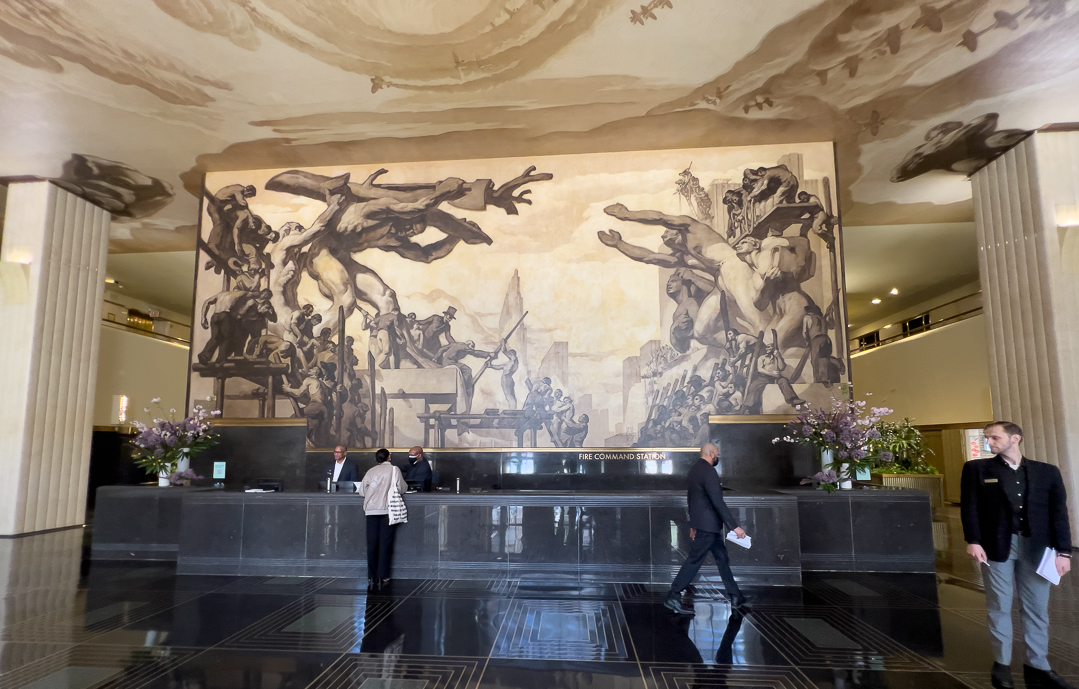 The route took us past the St. Regis, giving us a chance to dump our jackets, and then on to Central Park and Columbus Circle before reaching its northernmost point, Lincoln Center. We walked Broadway south to 42nd Street and turned on 8th Avenue for what might have been the most exciting spot on the route – the Port Authority Bus Terminal. The rest of the walk passed in a blur – to Macy’s, through Penn Station and up 7th Avenue (slightly off the official route) before we returned to our hotel. Dinner tonight was at Bengal Tiger. It’s a small Indian restaurant on the 2nd floor of a nondescript building. The place was packed when we got there just before 7, but we only had to wait about 15 minutes. They offered a three course $25 prix fixe, including dessert. And that brought back memories.

When Diane and I went on our honeymoon, we picked Toronto. There were many reasons, but one was that I’d been there a year or so previously and I really liked an Indian restaurant I’d eaten at. Of course we went there and enjoyed a great meal – until it came time for dessert. I’d ordered Gulab Jamun, based on the menu’s description of it as “Indian rosewater-flavored ice cream”. I didn’t like it at all, and didn’t do a good job of hiding my reaction – the restaurant offered me something else, but I’d been unwilling to have Gulab Jamun again.

Tonight, though, I felt brave and gave it another try – and this time, I liked it! It was warm (not at all like ice cream!) and pleasantly sweet. I guess I just needed to give it some time.