We didn’t do a volksmarch today – instead, we took a Bowery Boys Walk through the site of the New York World’s Fairs – Flushing Meadows Park.

We entered the park from the 7 train at Gotham Plaza, just as I had done on my visit in 1965 (Diane lived on Long Island, so her family drove to the fair and used an entrance near the parking lots). 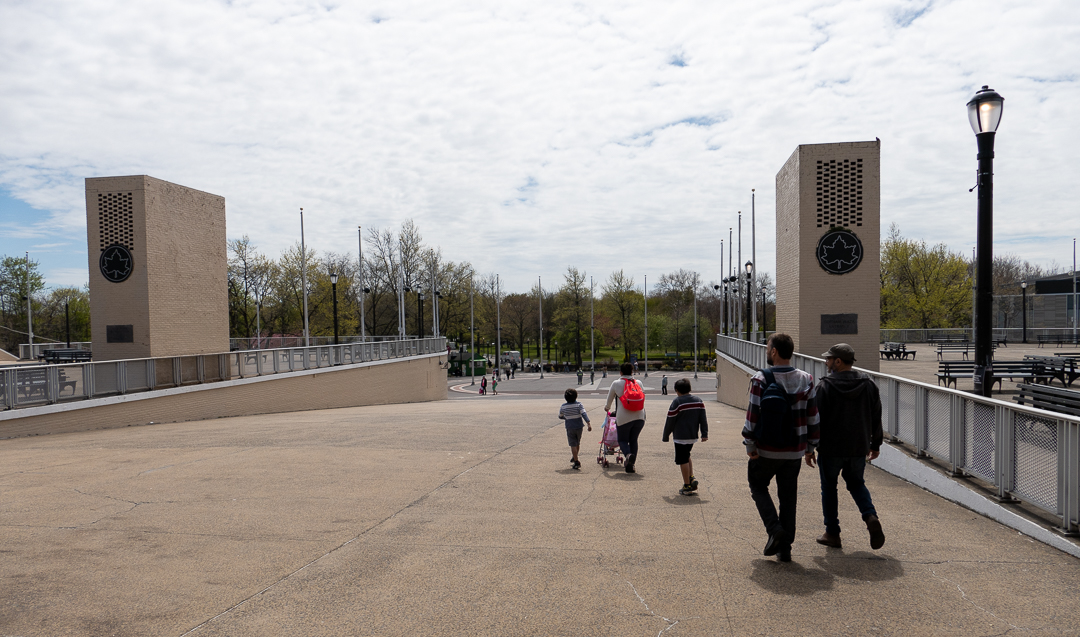 There’s an mosaic based on an Andy Warhol portrait of Robert Moses at the entrance to the park; it was installed in 1998 and has seen better decades. Warhol and Moses didn’t get along well – Moses had the murals that Warhol painted for the fare covered up; this mosaic is based on one of the images that Moses had covered. 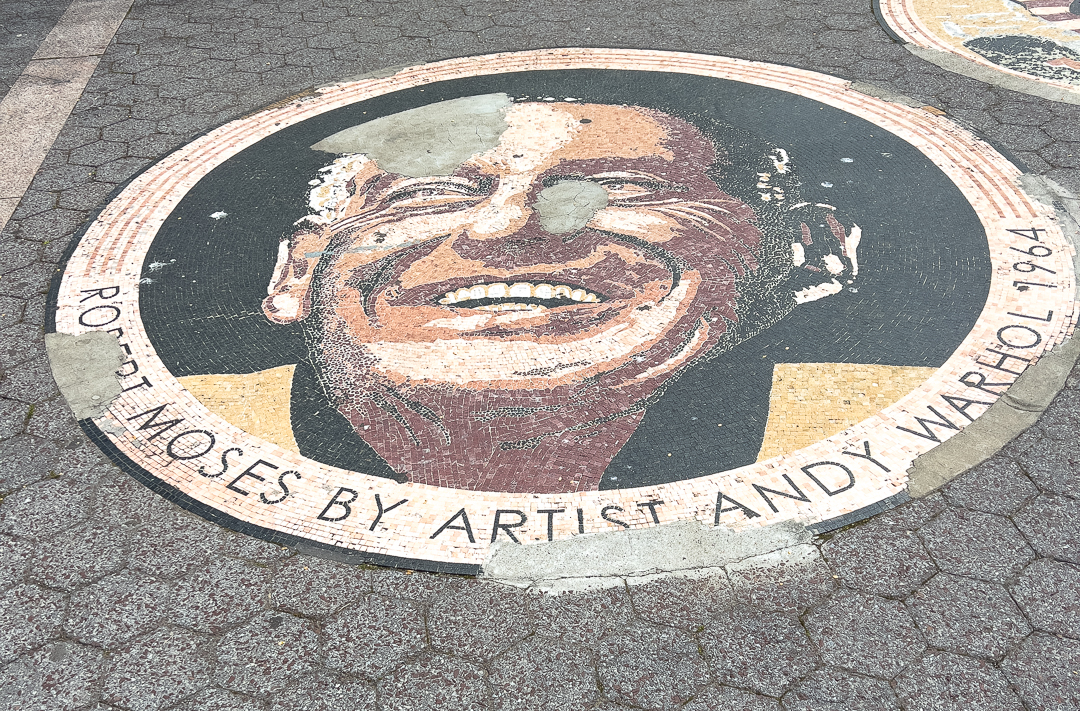 There were less controversial subjects for the mosaics, though, like Elsie the Cow, one of the stars of the 1939/40 fair. Our guide told us people were upset that Elsie didn’t have a companion, so the Borden Company created Elmer – who became the namesake of the glue. Diane’s Dad always called Elmer’s “cow glue”, but I guess “bull glue” would have been more appropriate. 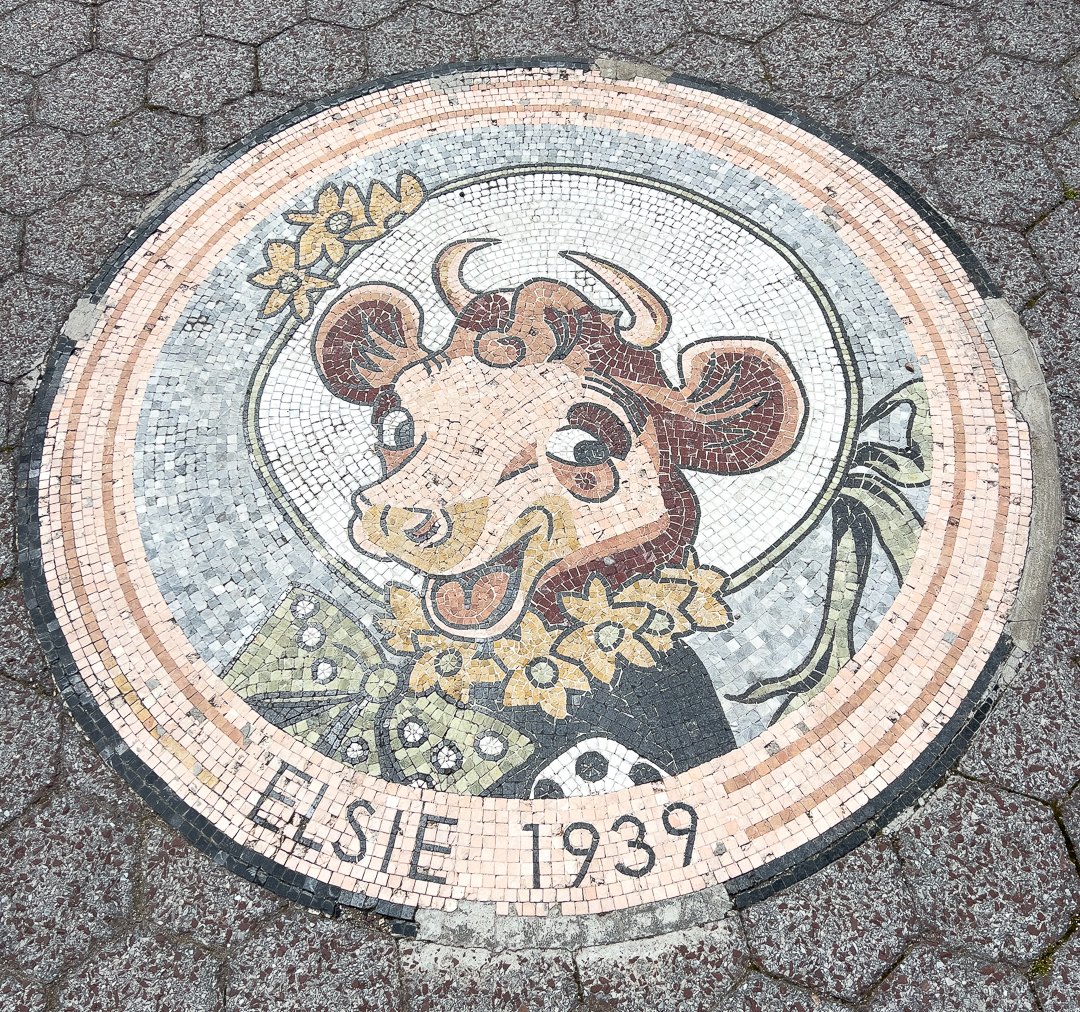 Our next stop was the Unisphere (which had been the site of the Trylon and Perisphere in 1939/40). It’s aging well, though the lights marking cities around the globe no longer light up at night. 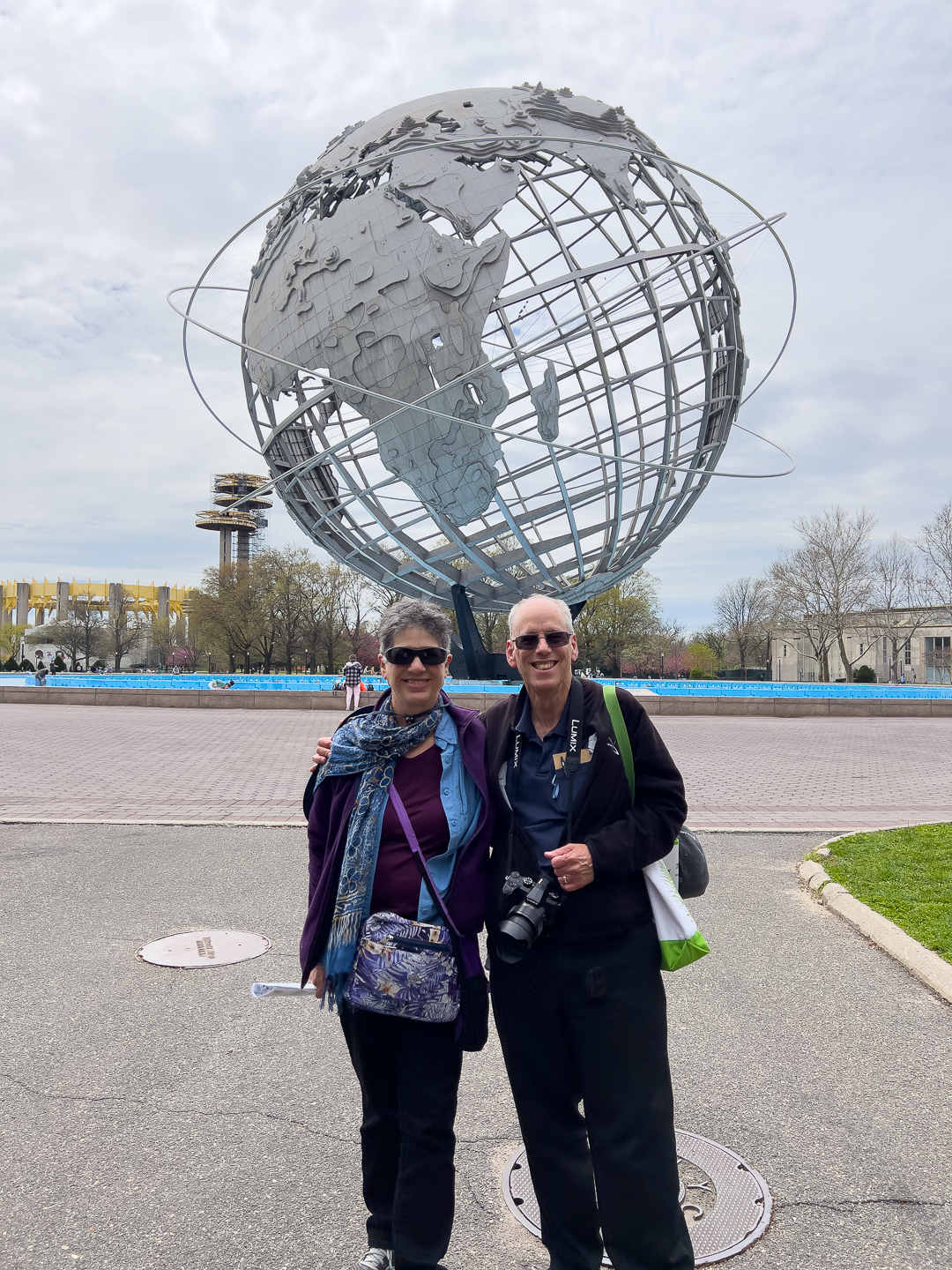 The 1939/40 World’s Fair took up almost 1200 acres; the 1964/65 version was 646 acres – much of the rest was used for parking lots. We walked through a good part of the park; there aren’t that many clear reminders of either fair left, since almost all of the structures were taken down soon after the fair ended, which left room for some nice trees. 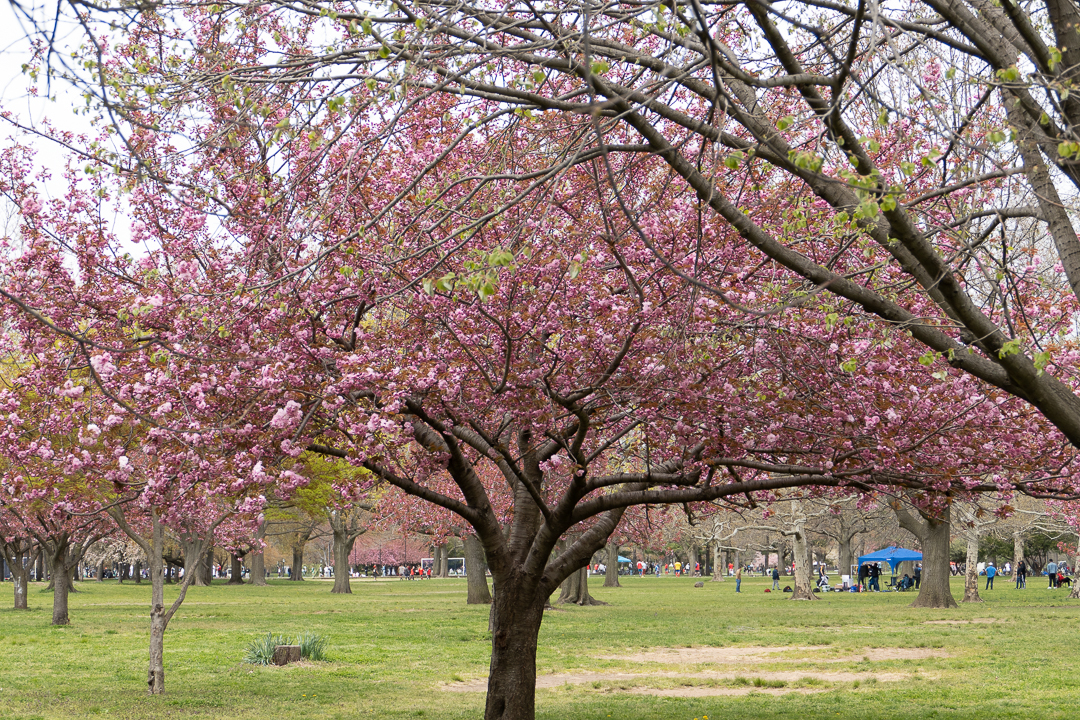 One remnant is much older than the fair – it’s the Column of Jerash from 120 CE, donated by the King of Jordan. It’s not the oldest artifact in New York City – that distinction goes to Cleopatra’s Needle in Central Park – but it is the oldest human-made object in Queens. 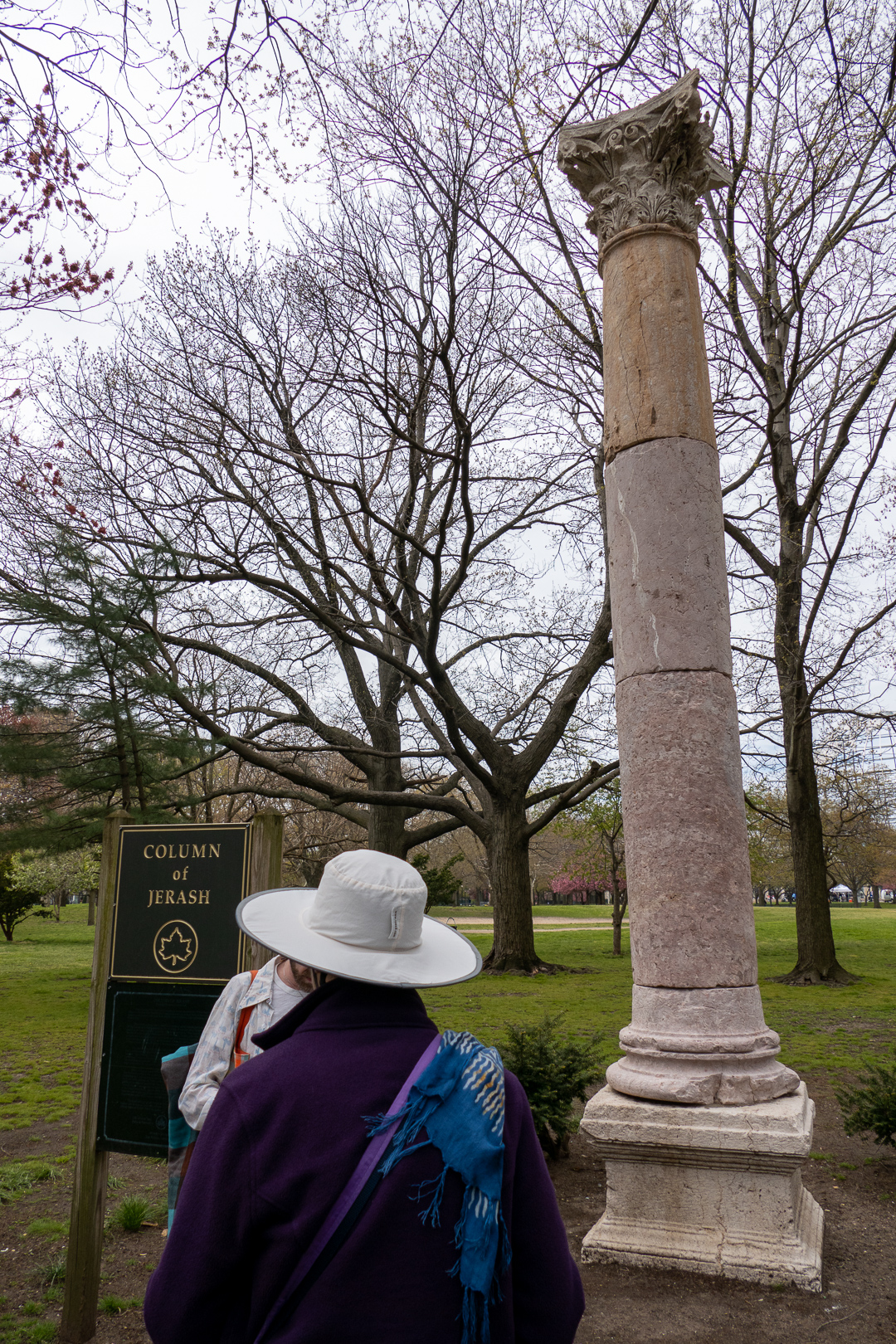 The New York State Pavilion is still standing, though the terrazzo floor embedded with a map of the state showing all the Texaco stations is long gone. It was used as a skating rink after the fair closed and Diane skated there; our guide told us about plans to try to restore it. 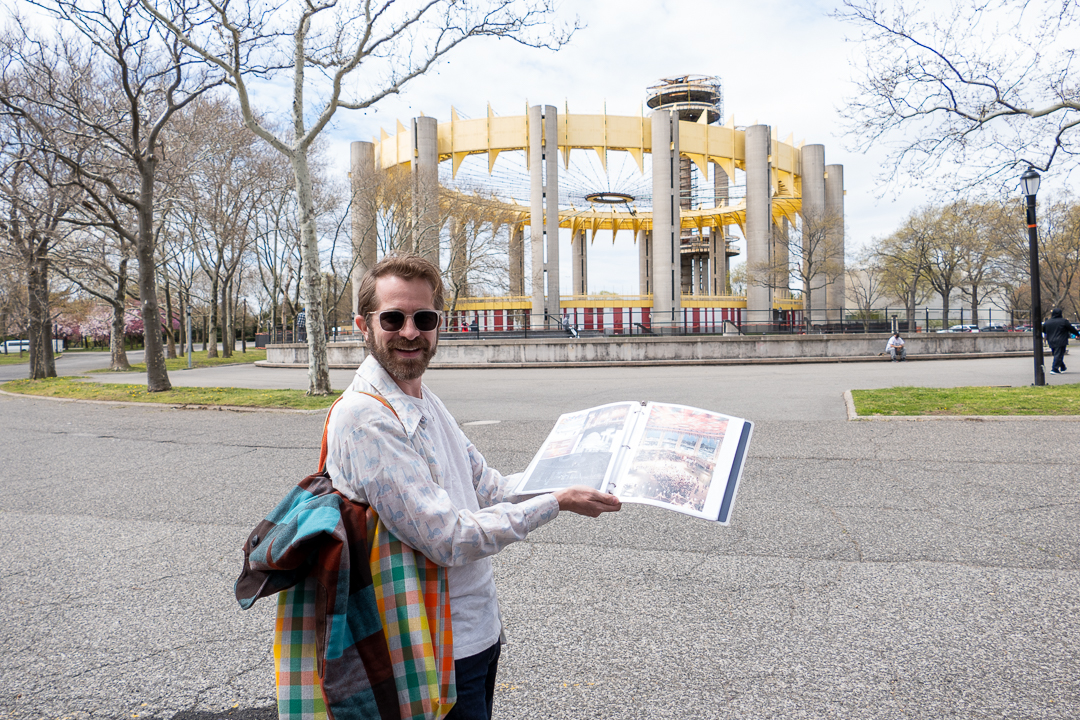 There are time capsules from both fairs buried together, to be opened in 6939; they were sponsored by Westinghouse, which is unlikely to survive as long as the capsules. 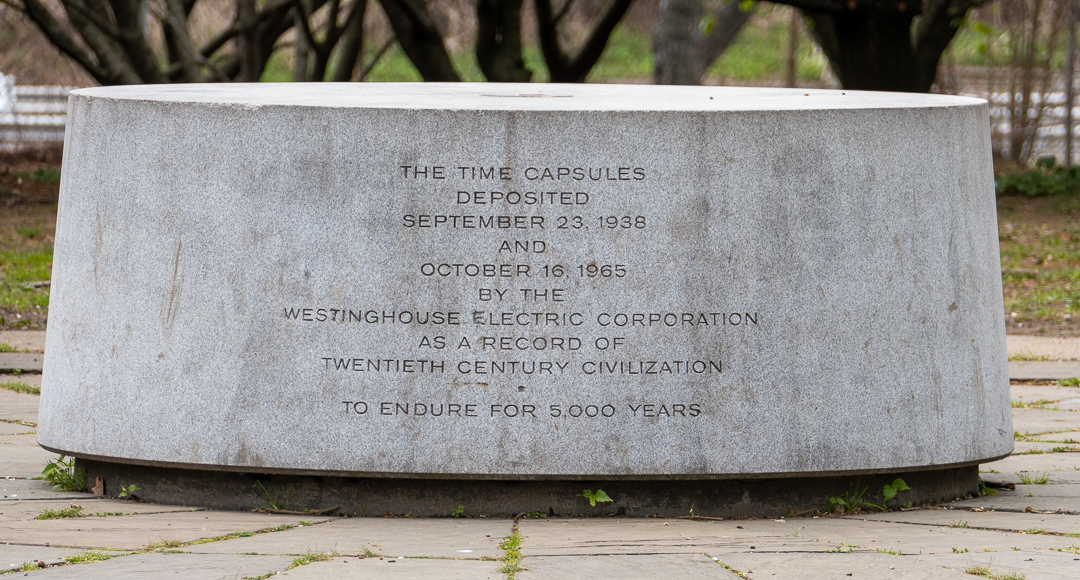 It was an interesting experience and brought back some memories of the time I’d spent at the Fair – Kyle told many stories and showed us photos from both fairs that helped bring the site to life.

I’m glad that the site has been turned back into a park for the most part – there were lots of people there playing games, barbecuing, and enjoying the weather. And it’s still tulip season! 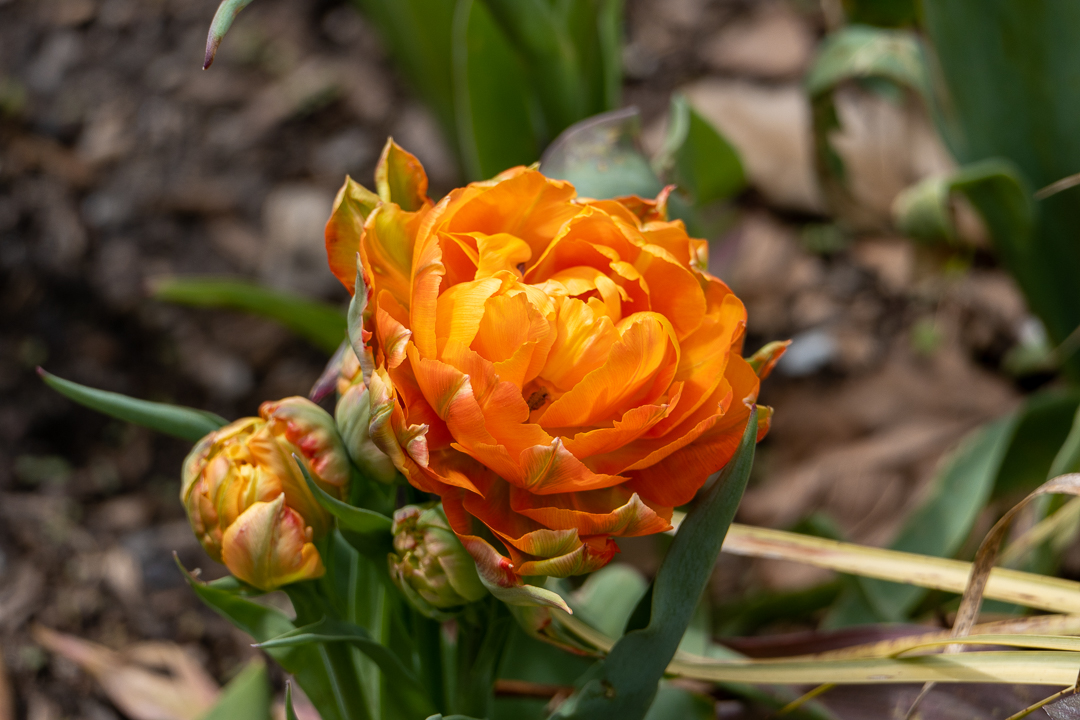 We took the subway back to midtown and did our part for global warming by having lunch at Angelo’s Coal Oven Pizza on 57th. It was delicious. 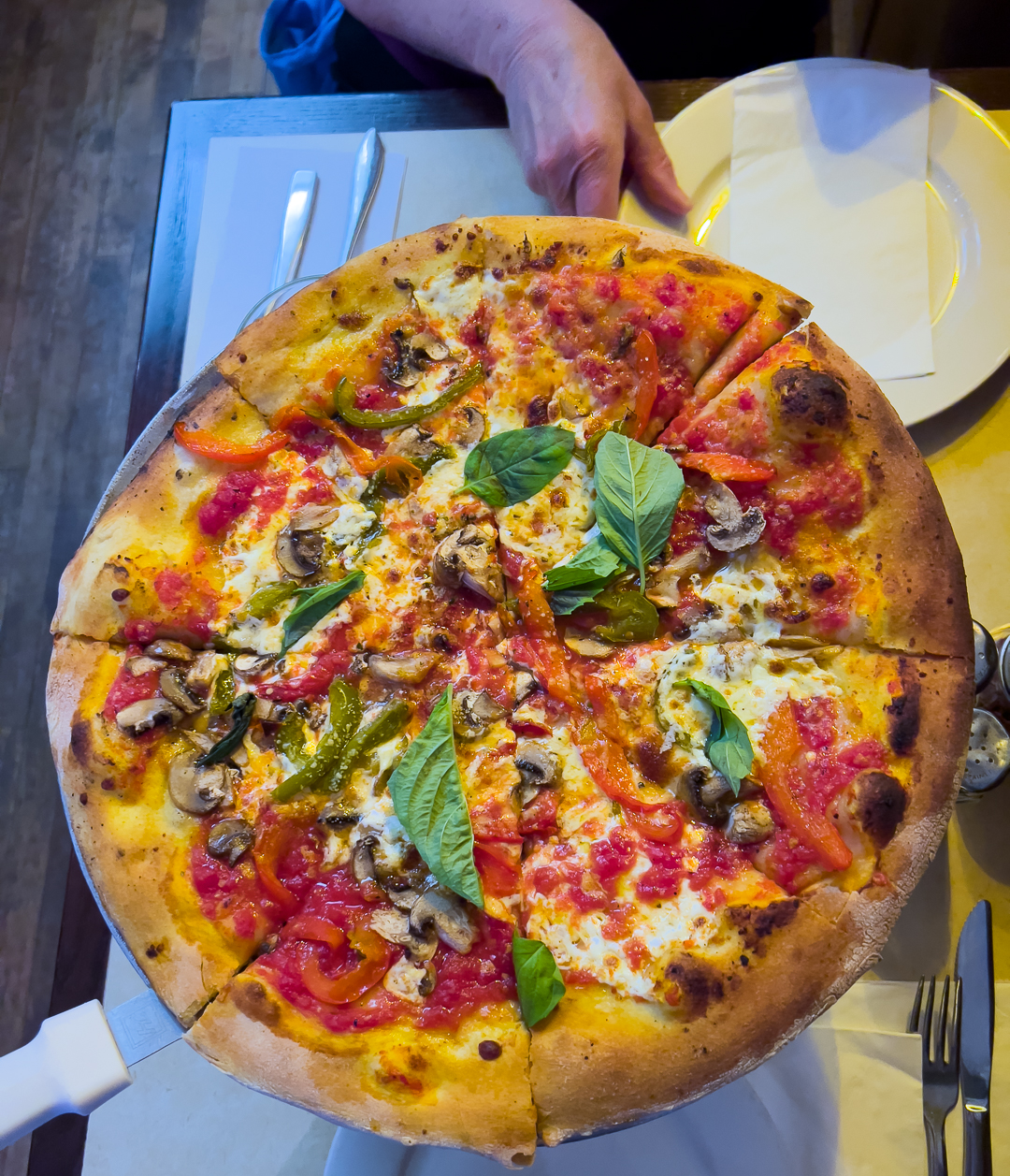 After dinner, we met an IBM friend for drinks at the Campbell Bar (formerly The Campbell Apartment) at Grand Central. It’s an interesting place, and it was quiet enough to encourage conversation – so when a band started setting up, we left. 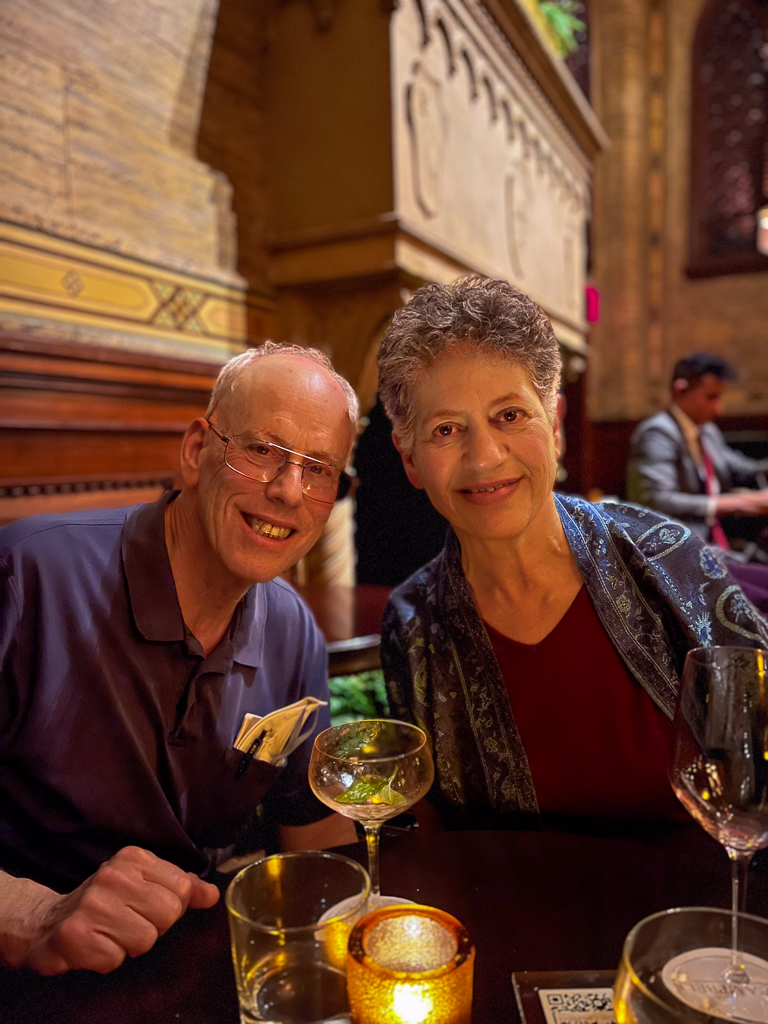 Our last stop for the day was for ice cream, at Emack and Bolio’s on Second Avenue. It was excellent, and I look forward to trying their Boston location next time we visit Jeff.