Our first excursion today was a guided walk through Annapolis. Annapolis has many striking buildings and homes; the Hammond-Harmon and Chase-Lloyd Houses are wonderful Georgian homes which face each other across a fairly narrow street. 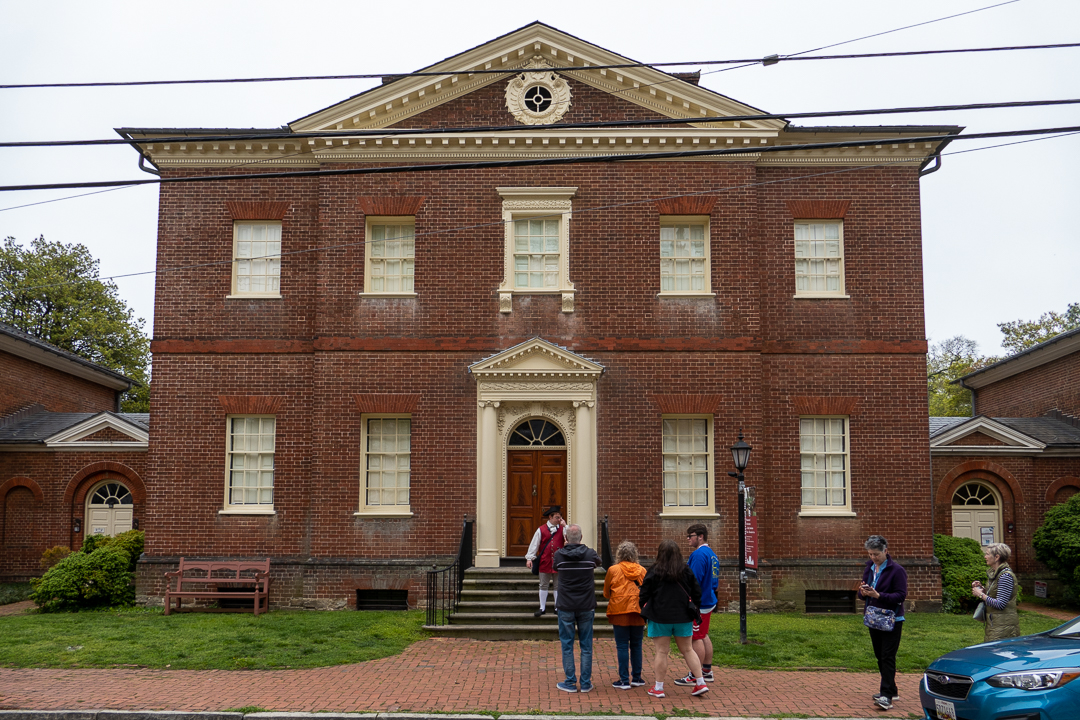 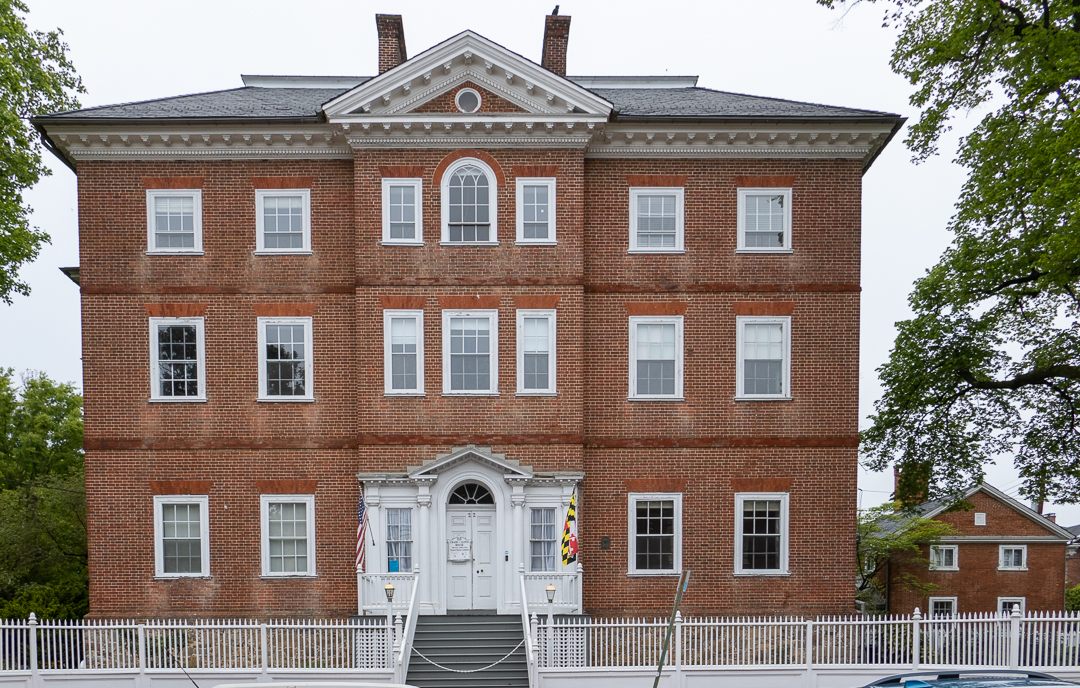 The Maryland State House was only a five-minute walk away; it was the US capitol for a short time at the end of the Revolutionary War and is where the Continental Congress ratified the Treaty of Paris. We were told the dome is magnificent – but it’s under construction, so all we could see was scaffolding. 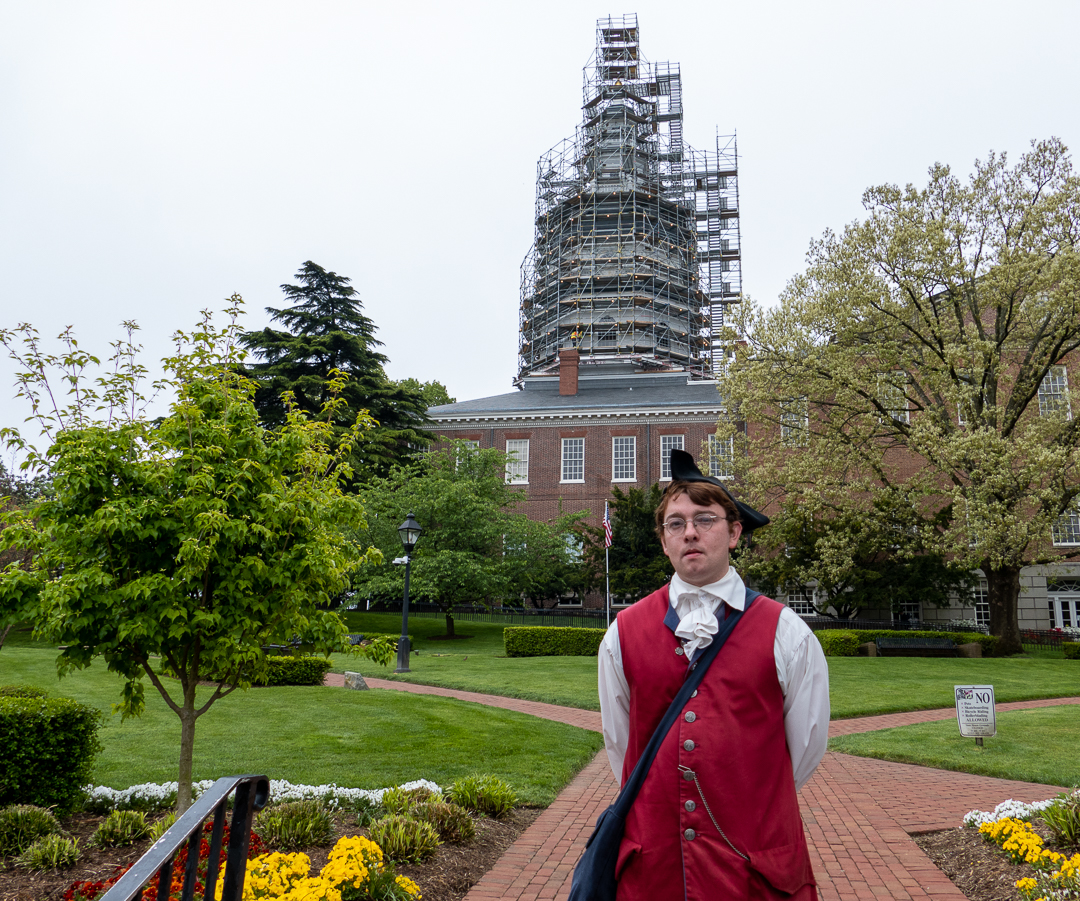 After the end of the Revolutionary War, George Washington wanted to return to private life; he formally resigned his commission here. They have reconstructed the moment of the resignation in the Old Senate Chamber and there’s a painting by Edwin White depicting the moment in one of the staircases. 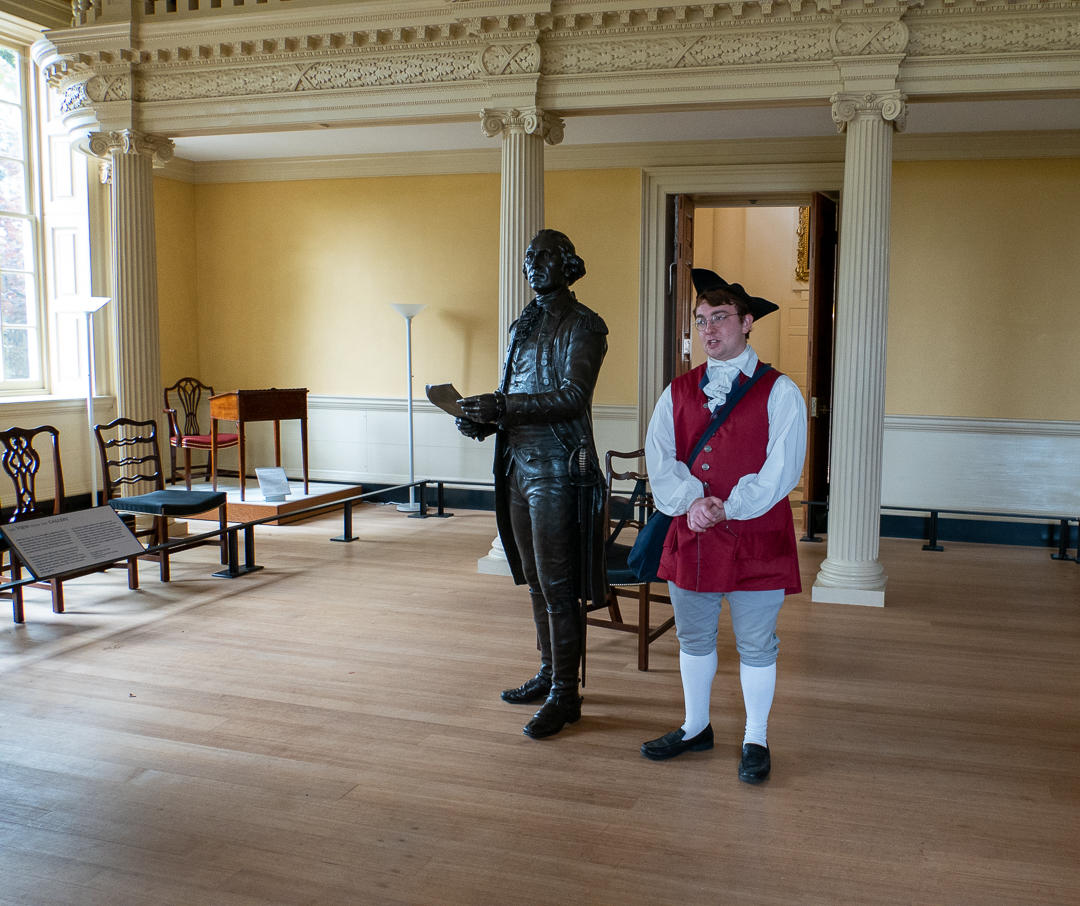 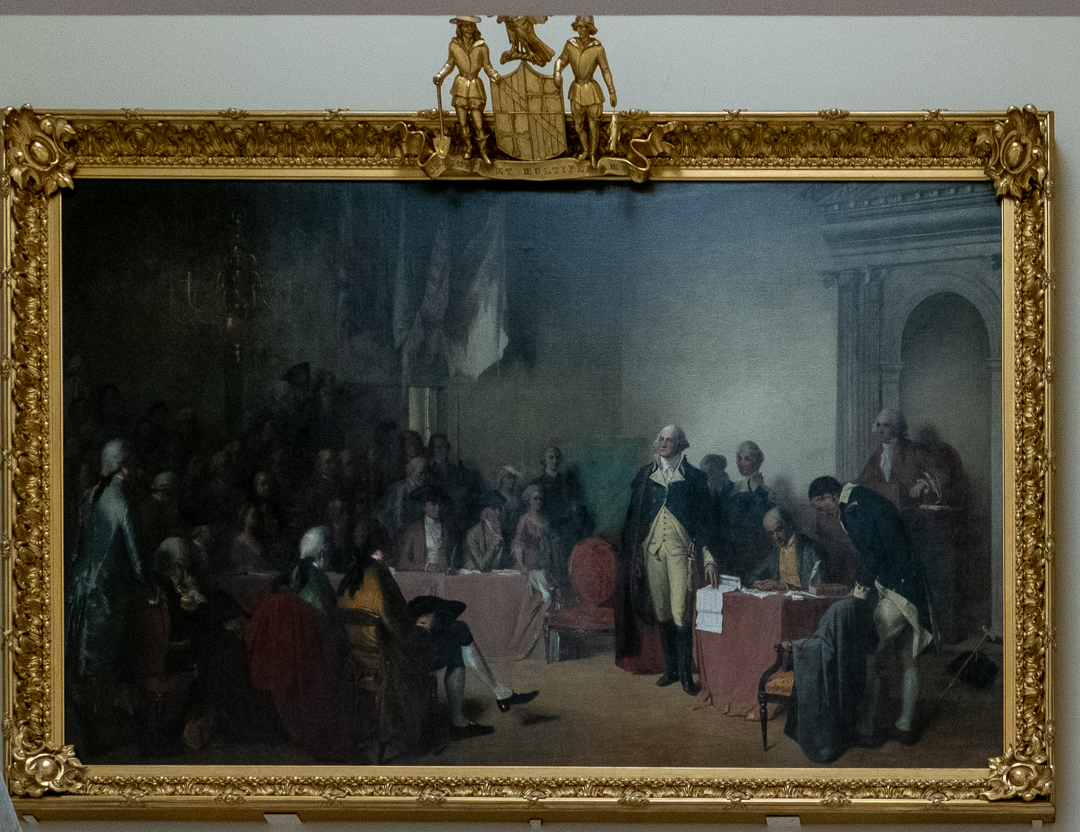 The Old House Chamber has been restored to its 19th Century appearance; there are statues of Harriet Tubman and Frederick Douglass and exhibits focused on the expansion of rights in Maryland to more and more people. I liked the way the shade behind the speaker’s desk is pleated. 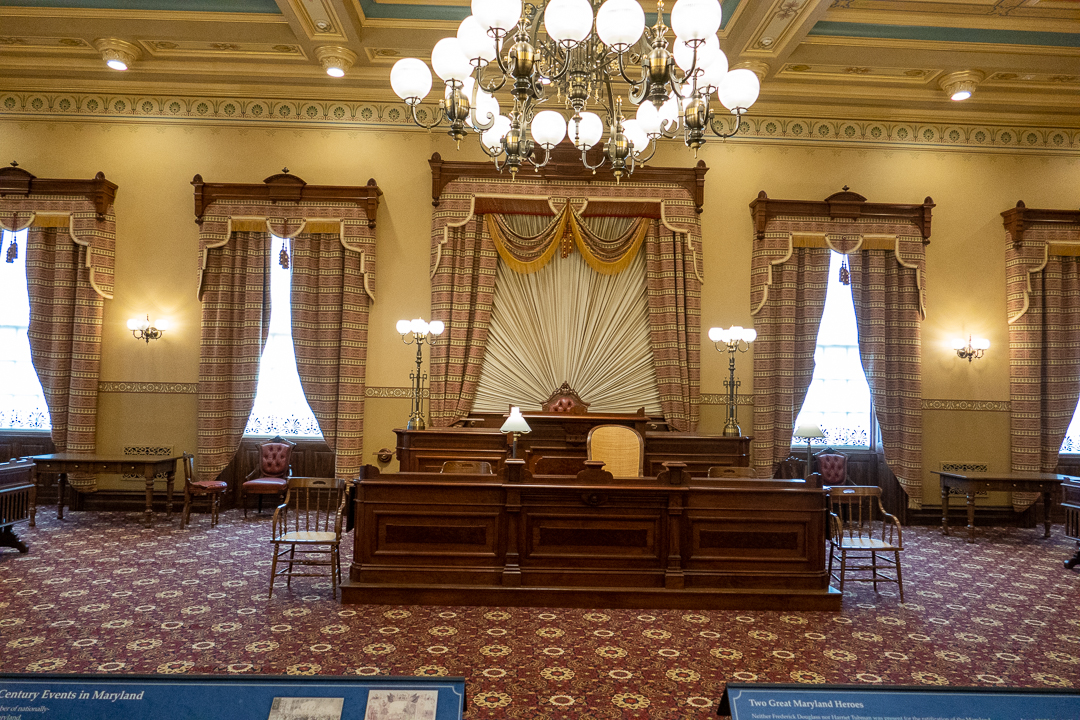 The current House and Senate Chambers were less distinctive than the old ones, but seemed pleasant enough. We weren’t able to go in (or even into the gallery), but the hallway doors were open. 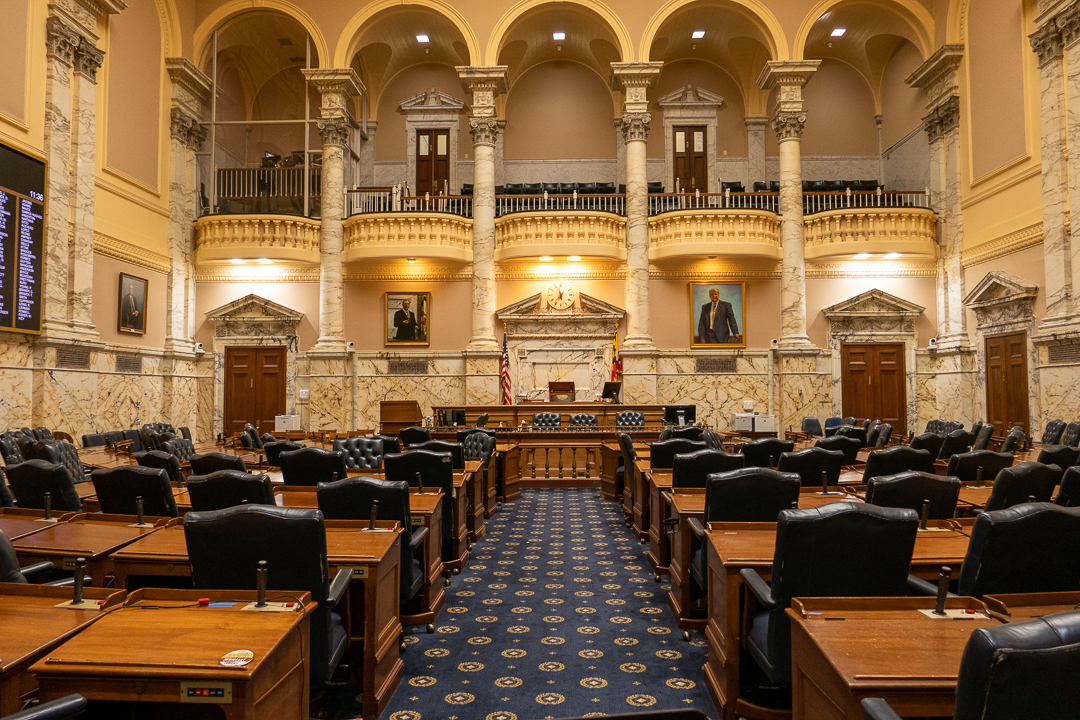 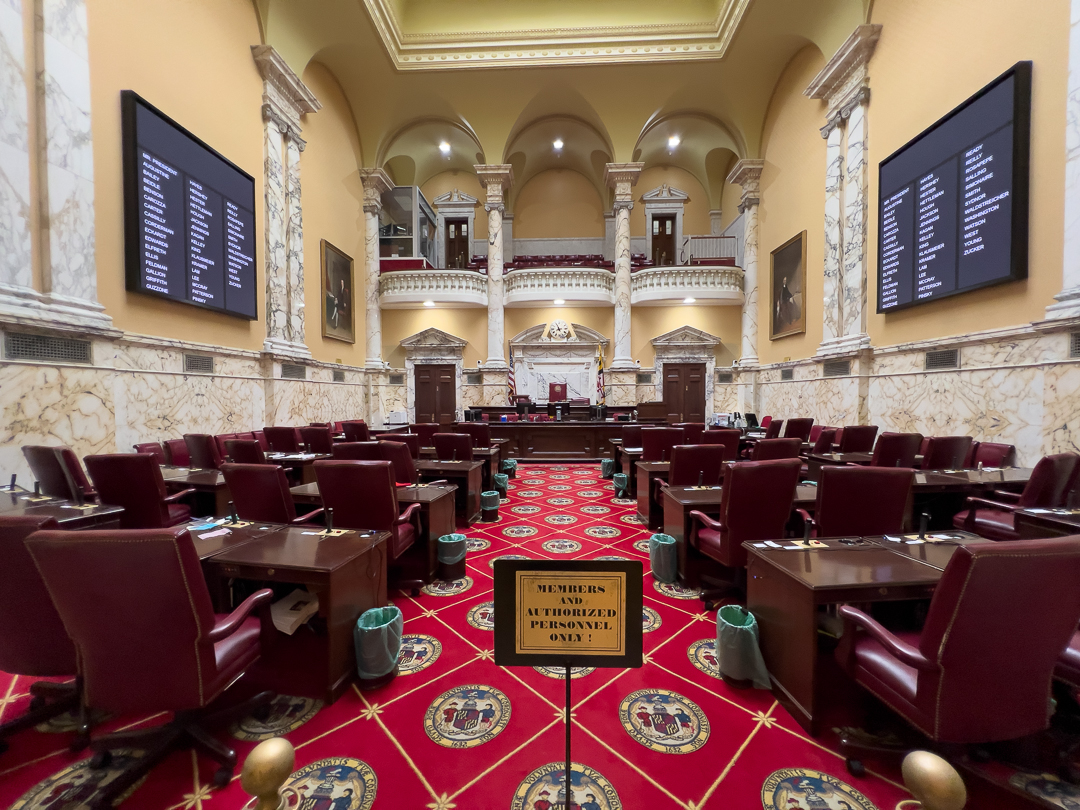 We decided to stay in Annapolis for lunch rather than tendering back to the ship. We had been planning to have a Reuben sandwich on board, so we did the next best thing and walked to Reuben’s Deli about a mile away; it’s a bodega/lunch counter and made a fine Reuben. On our way, we enjoyed some of Annapolis’s public art, including the Kunta Kinte/Alex Haley Memorial (which we weren’t able to look at this morning because the tide was in and the memorial was partially submerged), some bike racks, and a bird I can’t quite identify. 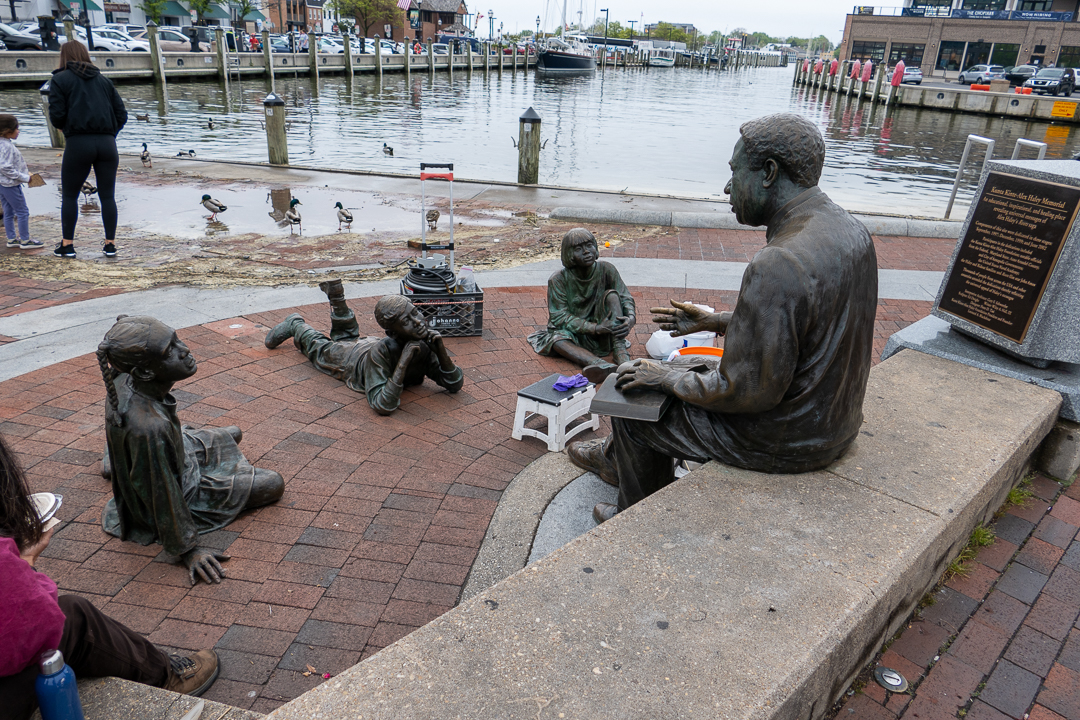 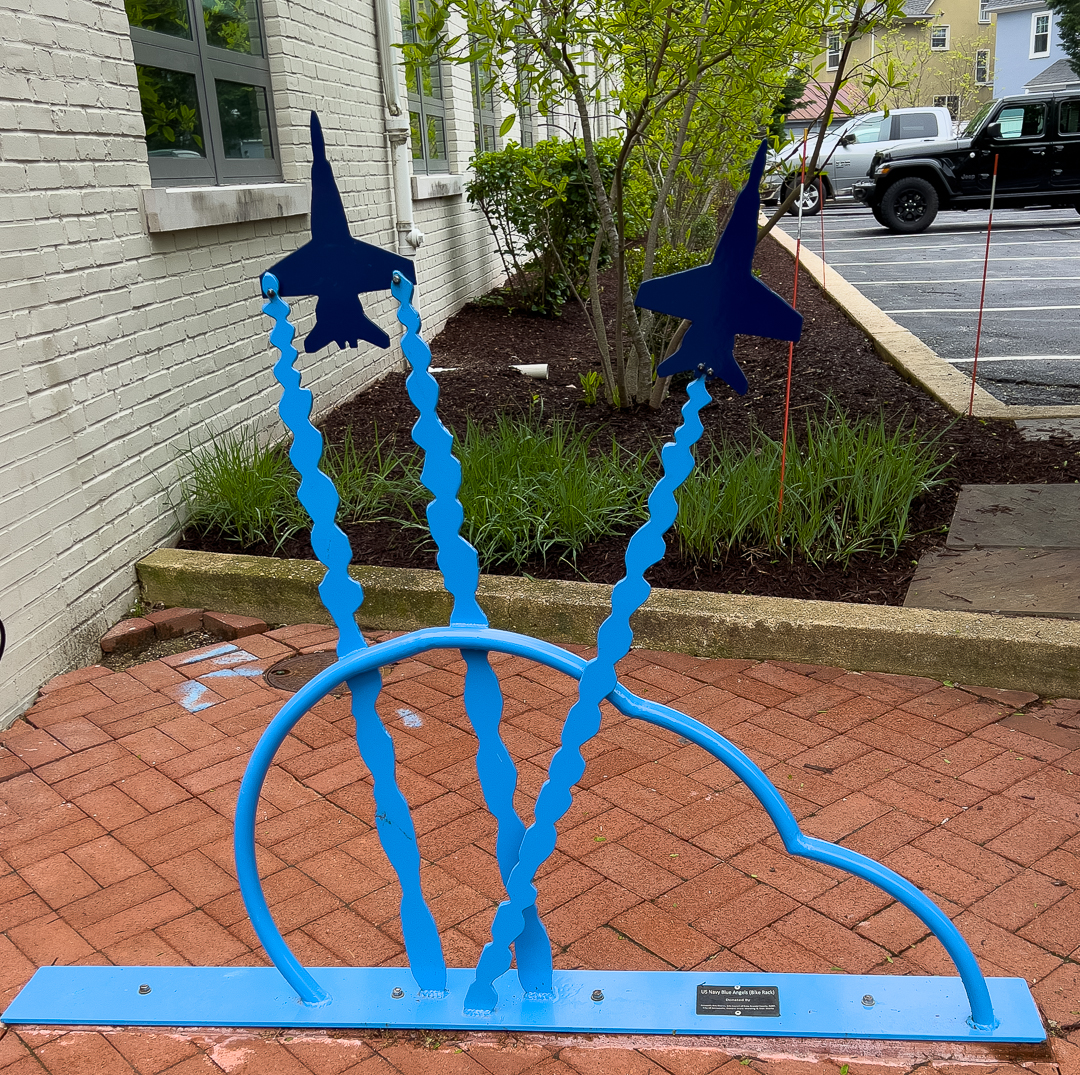 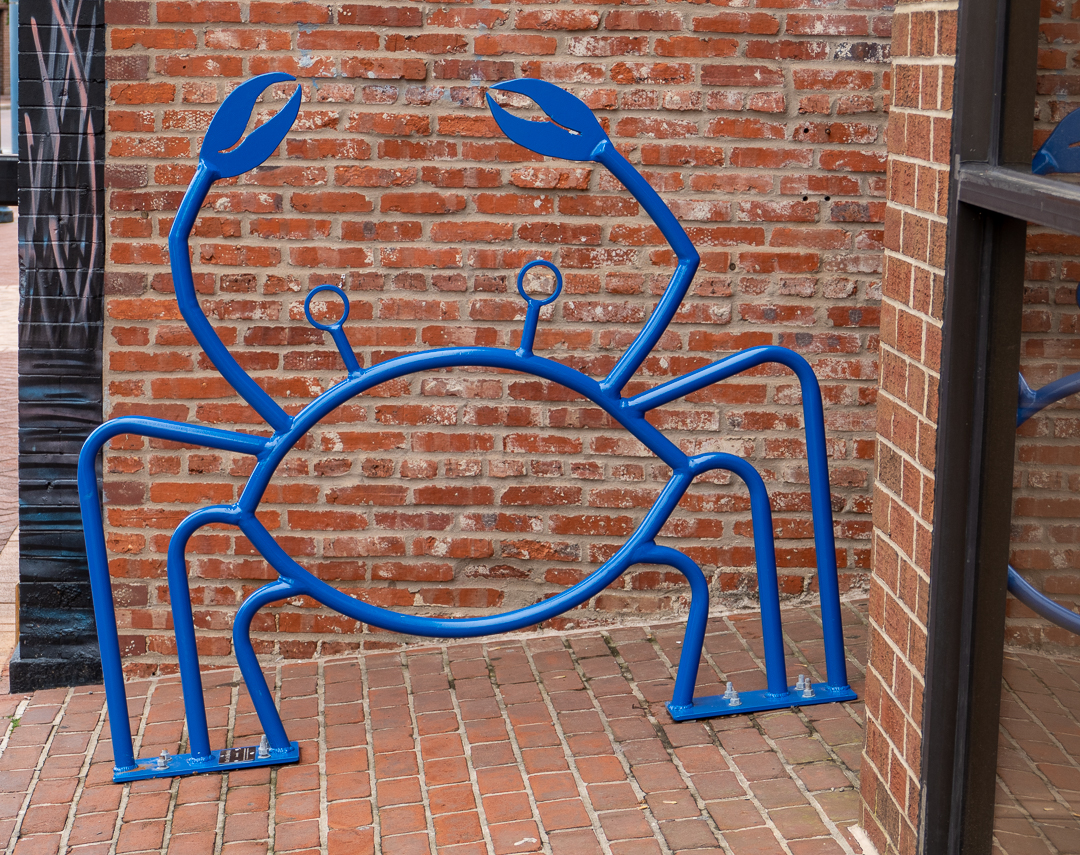 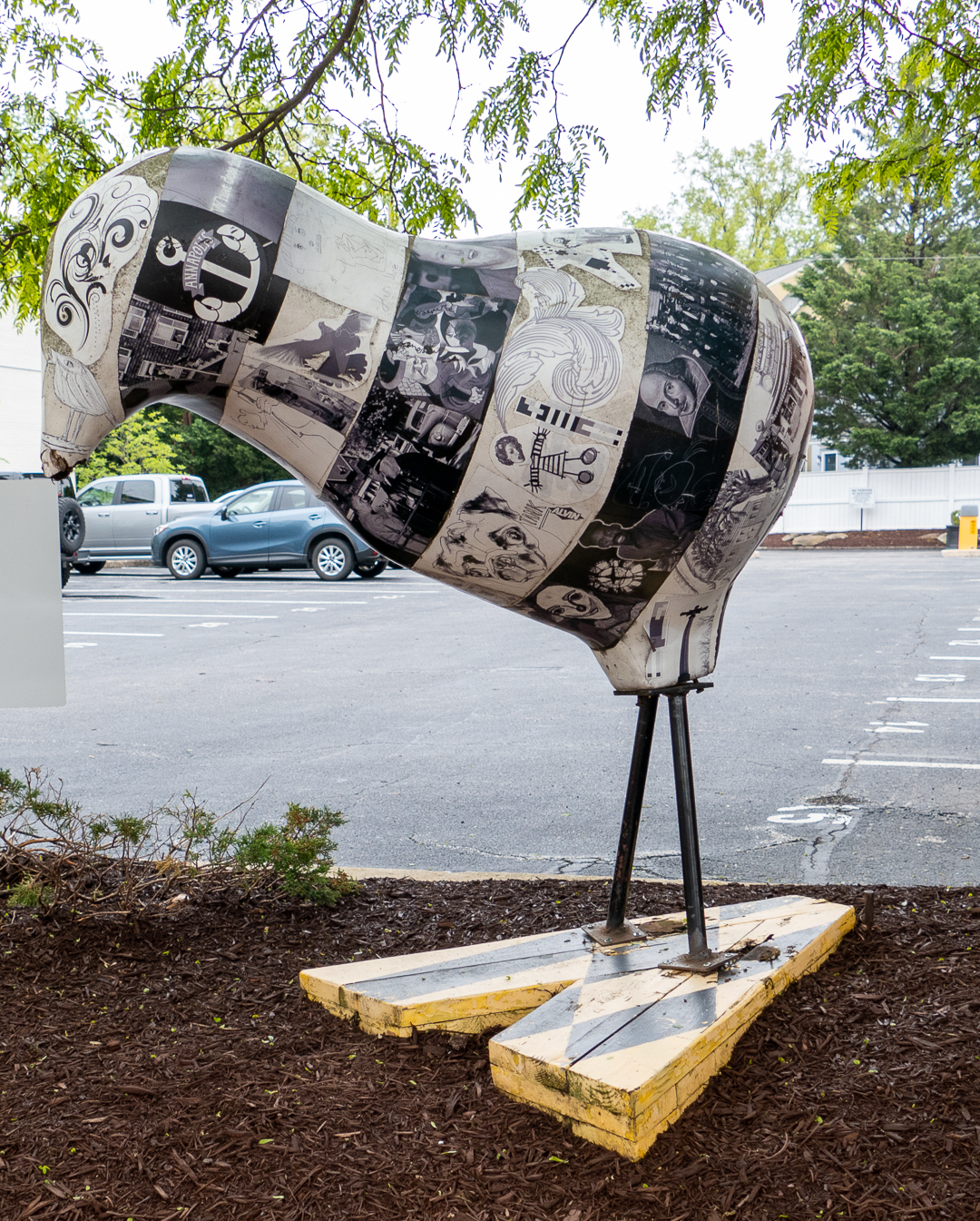 We walked back to City Dock to meet our afternoon tour; on the way, we discovered that the Maryland State Medical Association has only grudgingly accepted the modern era.

I wanted something sweet after the Reuben; we stopped at the Annapolis Ice Cream Company. I almost had their lemon chocolate chip ice cream – it was good, but there wasn’t enough chocolate so I went with chocolate chocolate chip. Yum! I didn’t get a photo of the ice cream, but I though their choice of flooring in the rest room was interesting. 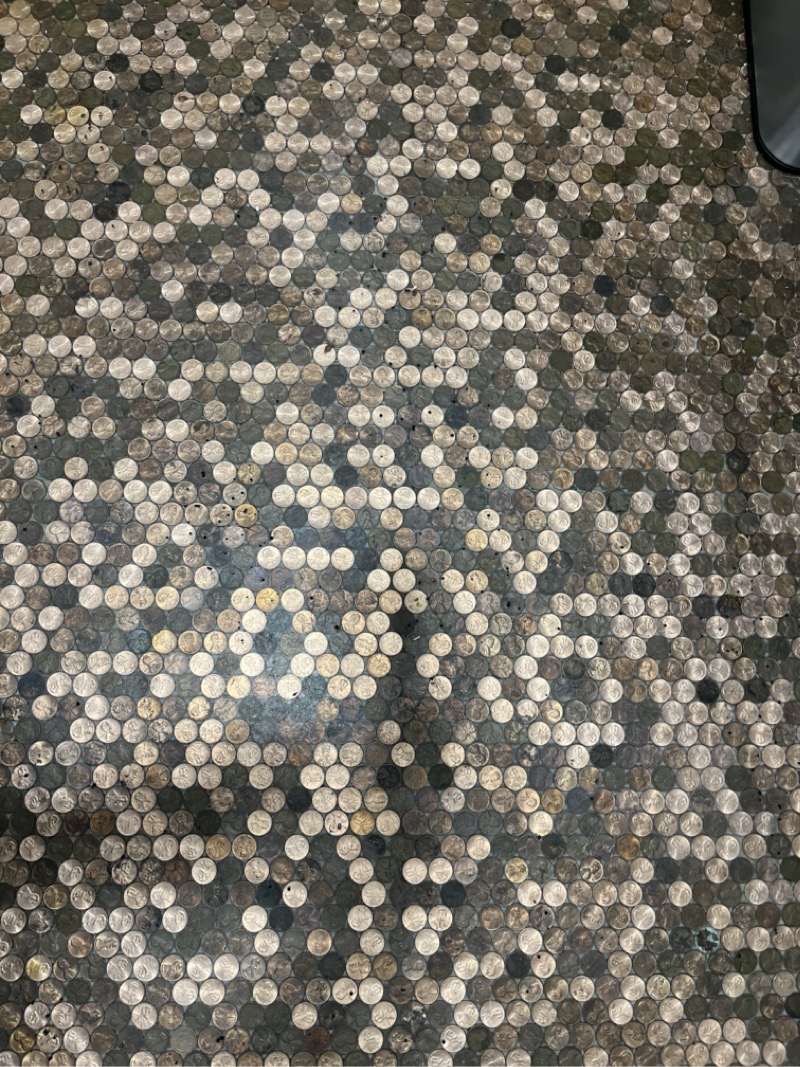 Our afternoon tour was a walk through the United States Naval Academy. The Barry Gate (Gate 3) was less than five minutes from the dock. 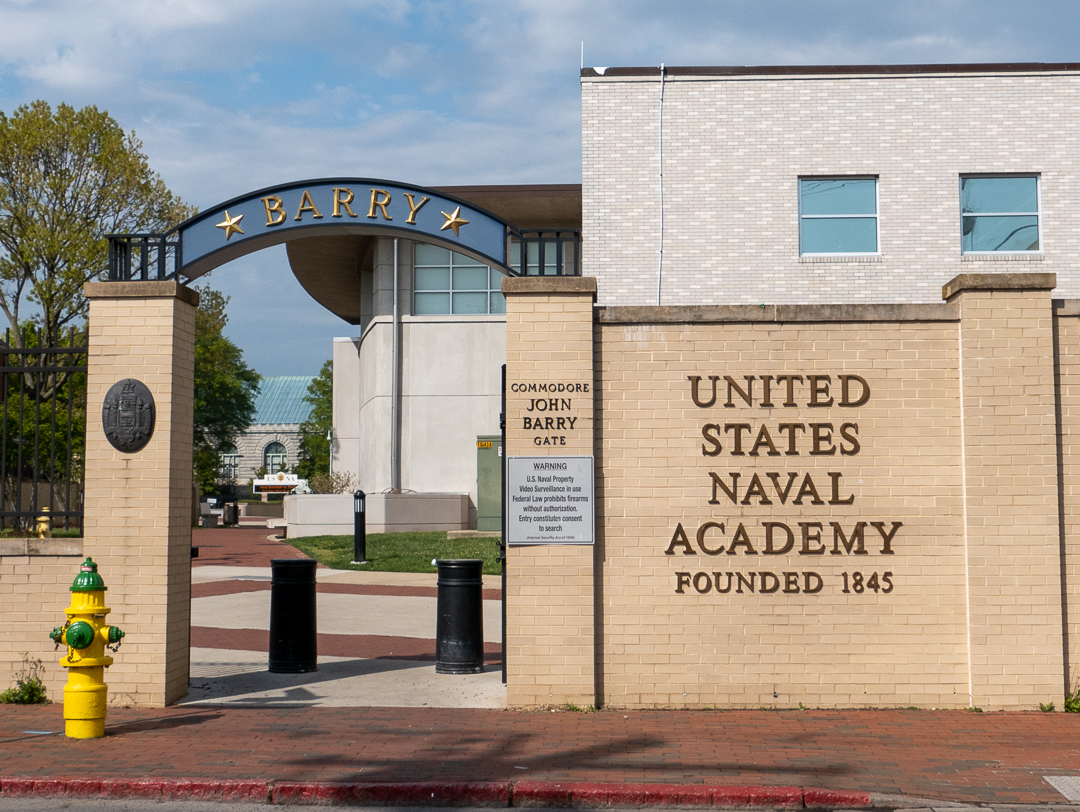 We watched the orientation film – it talked about the midshipman experience much more than it did about the Academy’s buildings and grounds. If I’d been in high school, it might have gotten me to apply for admission.

After the film, we met our guide. Our first stop was Captains’ Row – they want to preserve the quiet there. 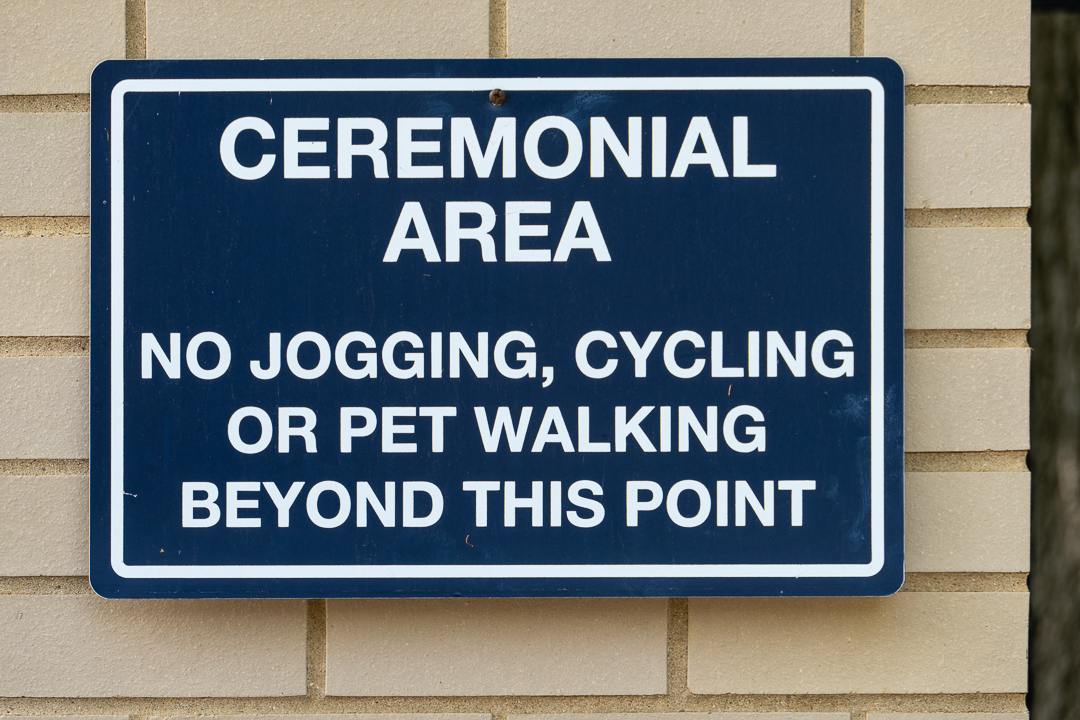 The houses on Captains’ Row were quite impressive, but they were nothing compared to the Superintendent’s quarters, which is next to the Chapel. 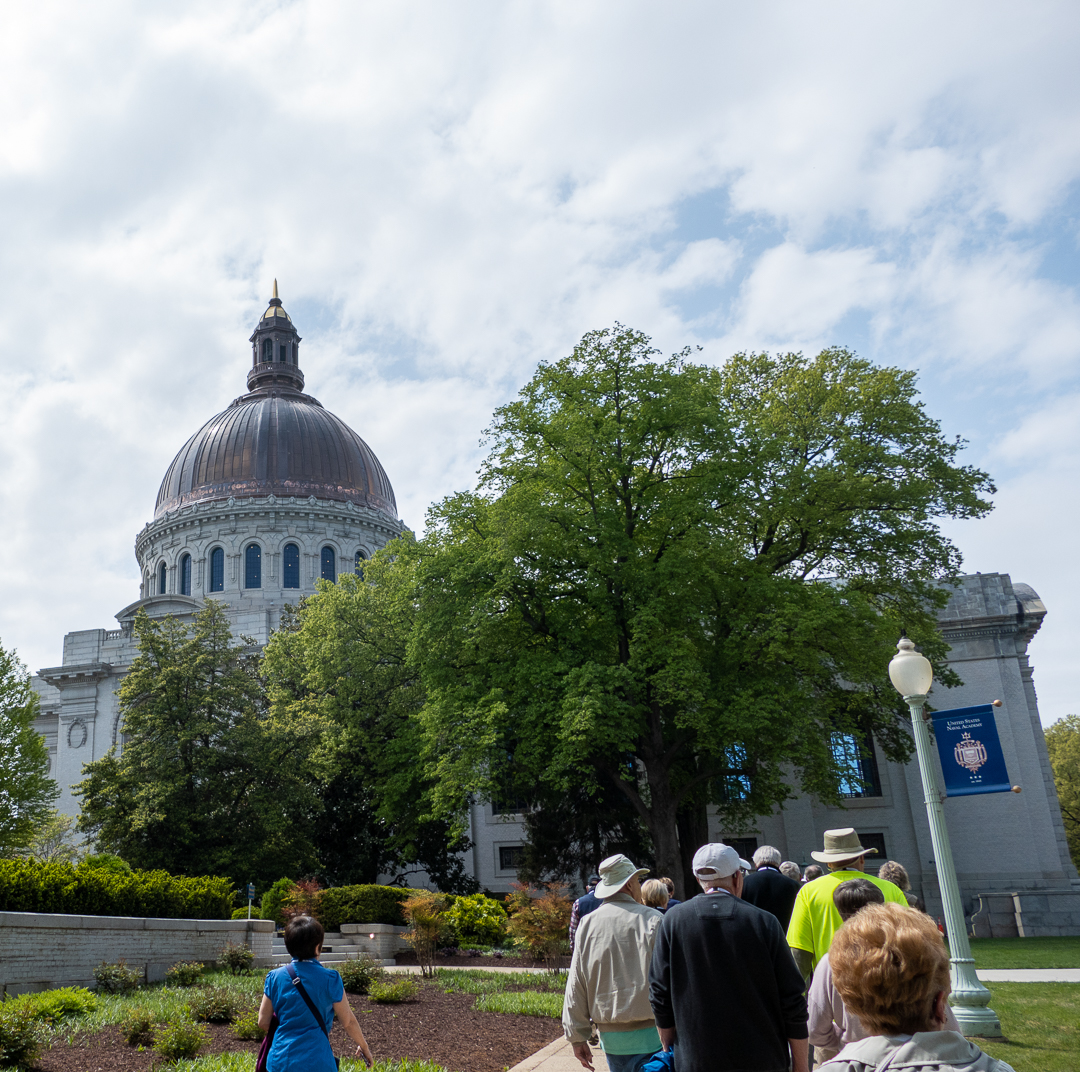 This chapel is used for Christian services; there is a Jewish chapel, too, but we didn’t visit it, and our guide said that there were facilities for other religions on the Yard, too. The stained glass windows lining the new part of the chapel all depicted Biblical scenes involving the water – one side from the New Testament and one from the Old Testament. I liked the window showing Jonah. Our guide said that the pipe organ had over 5,000 pipes spread throughout the chapel. They do Handel’s Messiah in December – he said it’s loud. And of course, they put ships in the middle of the pipes. 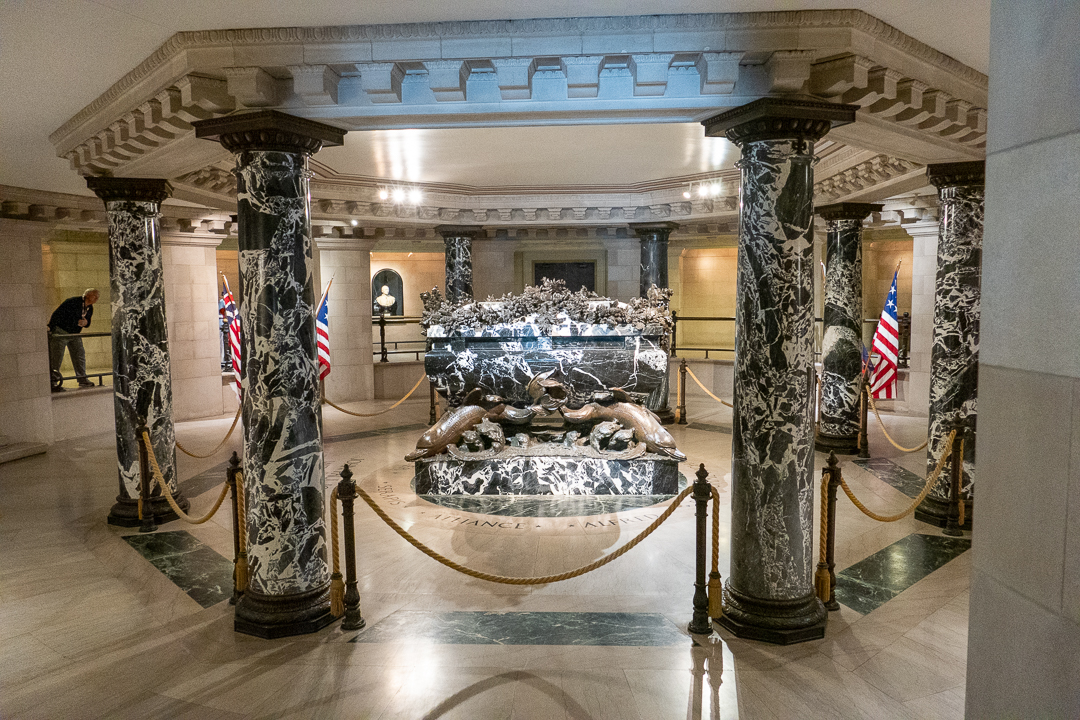 Our next stop was Bancroft Hall, the largest dormitory in the country; it houses Memorial Hall, which is dedicated to the memory of Naval Academy graduates who died in service. The bell from the USS Enterprise is outside Bancroft Hall; our guide said that they ring it every time Navy beats Army. All of the Naval Academy graduates at Midway survived the battle, but not all made it through the war. Their monument tells the story (with diagrams) of the battle.

There was much more to see, but we had to get back so we could tender out to the ship before dinner.

While we were waiting for dinner, we saw the midshipmen practicing their sailing skills.

We had another nice sunset, too. 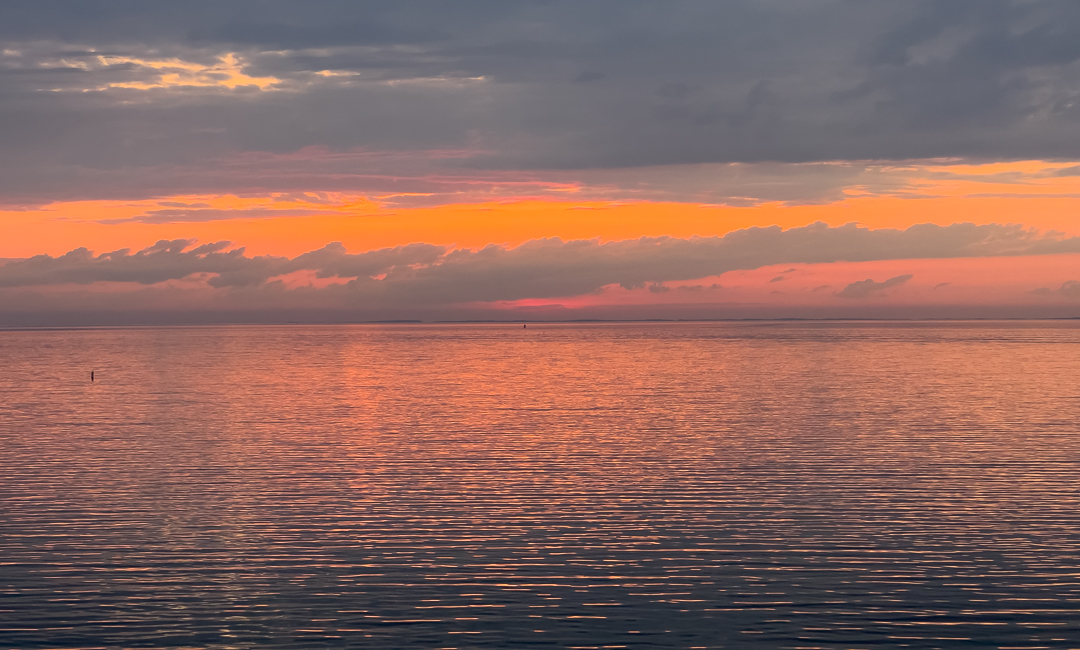 Our entertainers Robert and Stephanie had to leave us tonight to attend his uncle’s funeral; they gave us a going-away concert before leaving. I hope we can sail with them again! 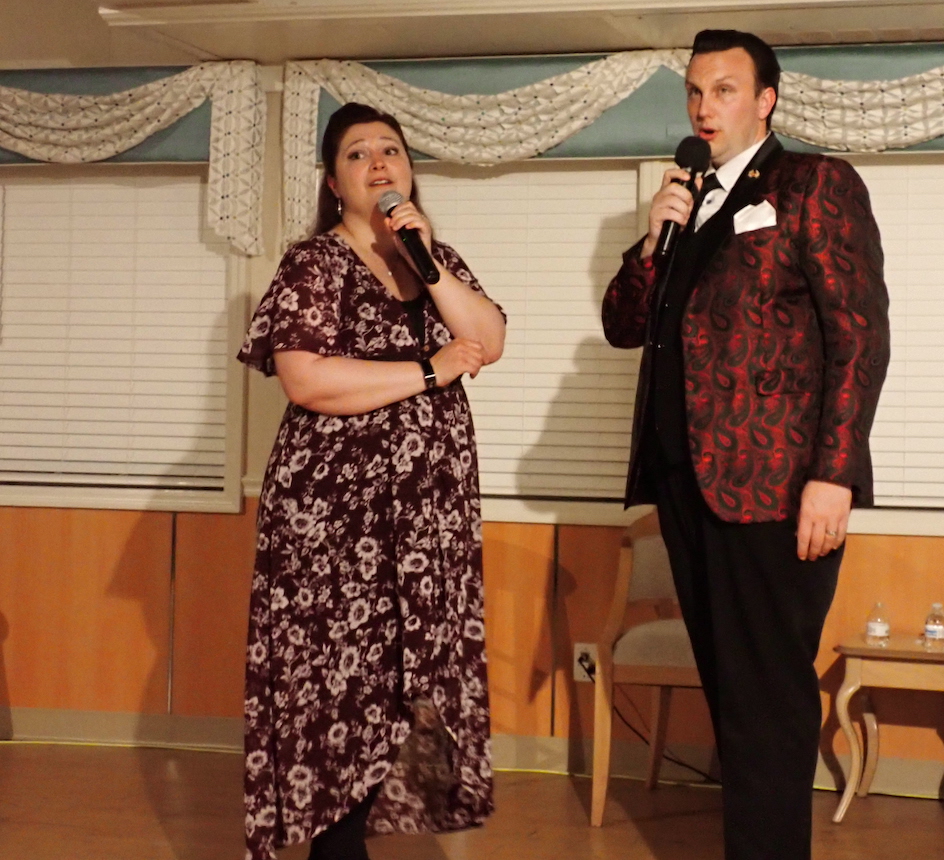