Our official Cruisetour doesn’t start until tomorrow, so we had nothing planned for us today. Instead of wandering aimlessly around Fairbanks, we decided to do the Historic/Scenic Volksmarch and wander around aimfully.

We got off to a slow start, having a leisurely breakfast and talking with other people on the tour, including our friends once they got to the restaurant. But eventually, we were ready to roll! 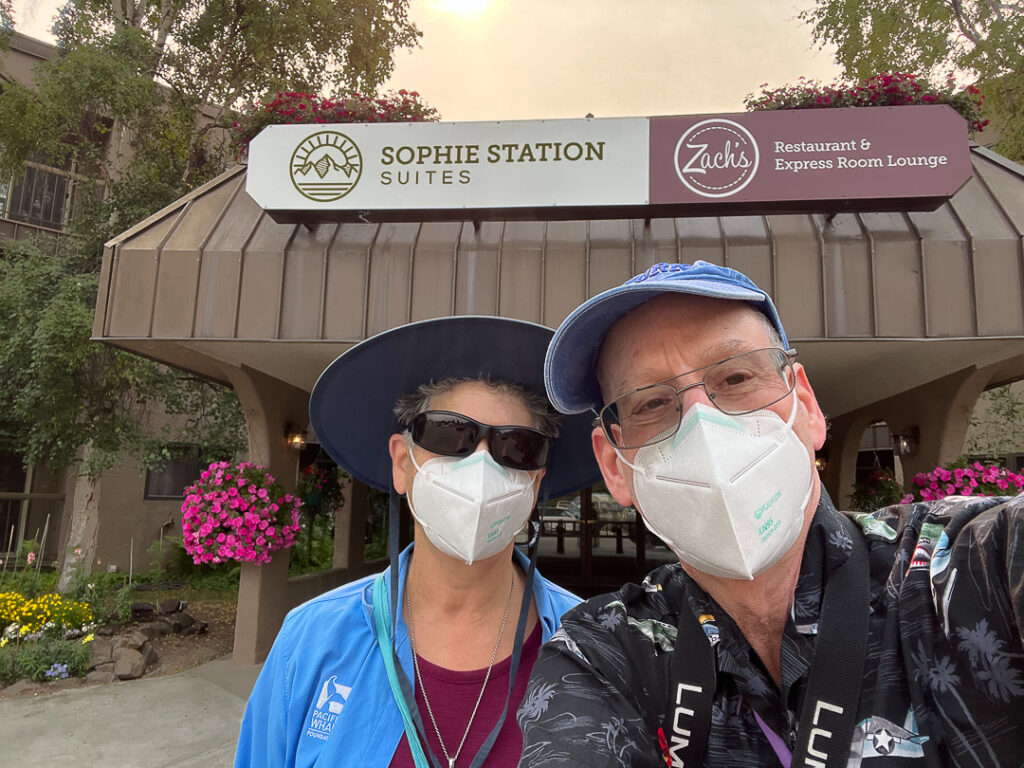 We registered and set out on the 10k walk; we had to cross the Chena River almost immediately.

We probably shouldn’t have followed the directions exactly – the bridge we walked across was under construction and the sidewalk was closed, but we persisted. A worker saw us just before we got to the end of the bridge and told us we were in the wrong place, but let us finish crossing.

The next stop on the walk was the Immaculate Conception Roman Catholic Church, the first Catholic church in Alaska. We were invited to go in and take a look – it wasn’t quite as ornate as the churches we’d just seen in Portugal and Spain, but it was still impressive. 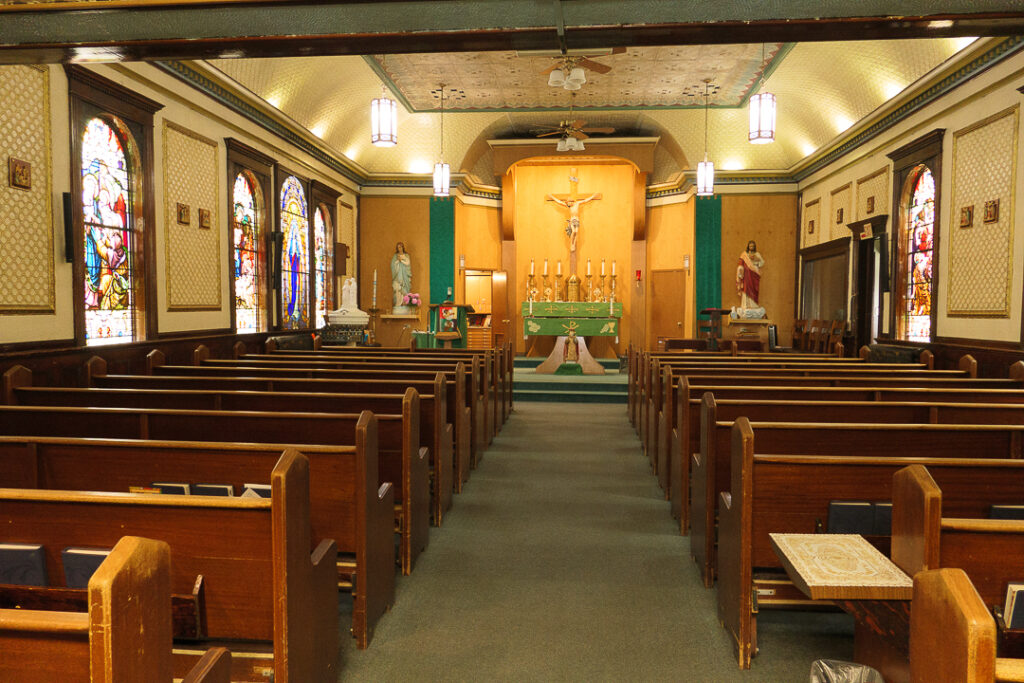 We left the church and walked past Doyon, Limited headquarters; Doyon is the regional Alaska Native corporation for Interior Alaska. Even their parking lot is sensitive to the special features of Alaska, like moose. 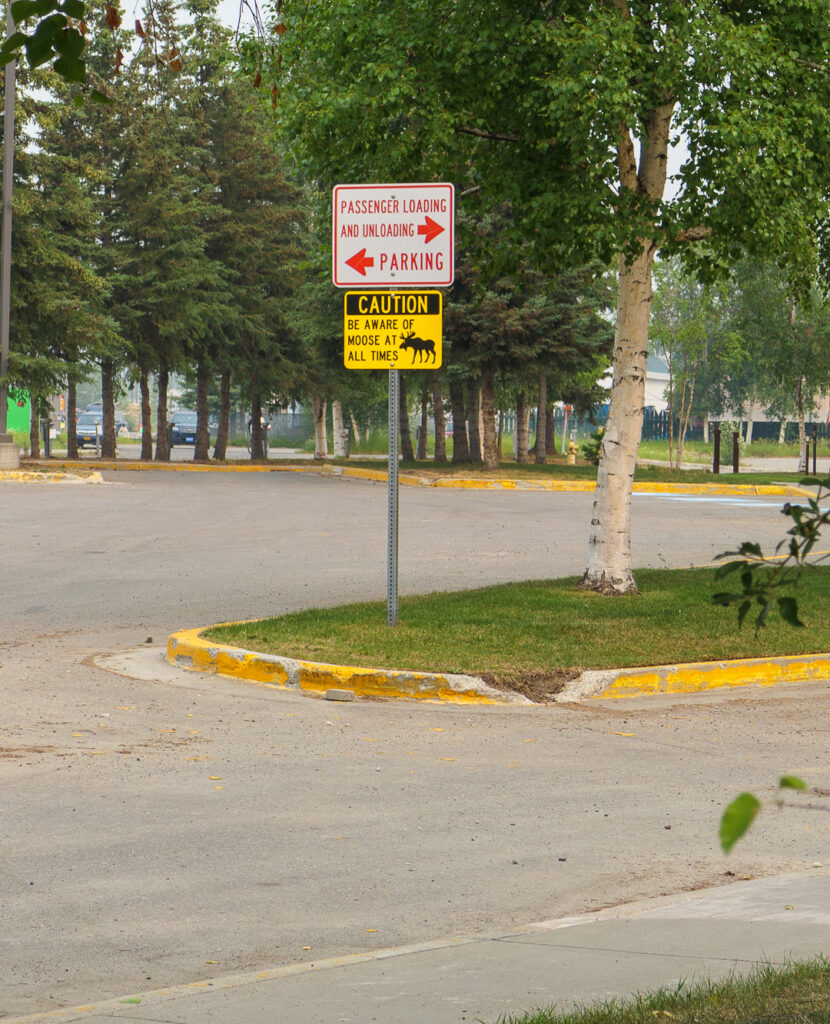 The walk took us back across the Chena to Golden Heart Plaza, which has a clock tower, plaques commemorating Alaska history and families, and the statue of the “Unknown First Family”. 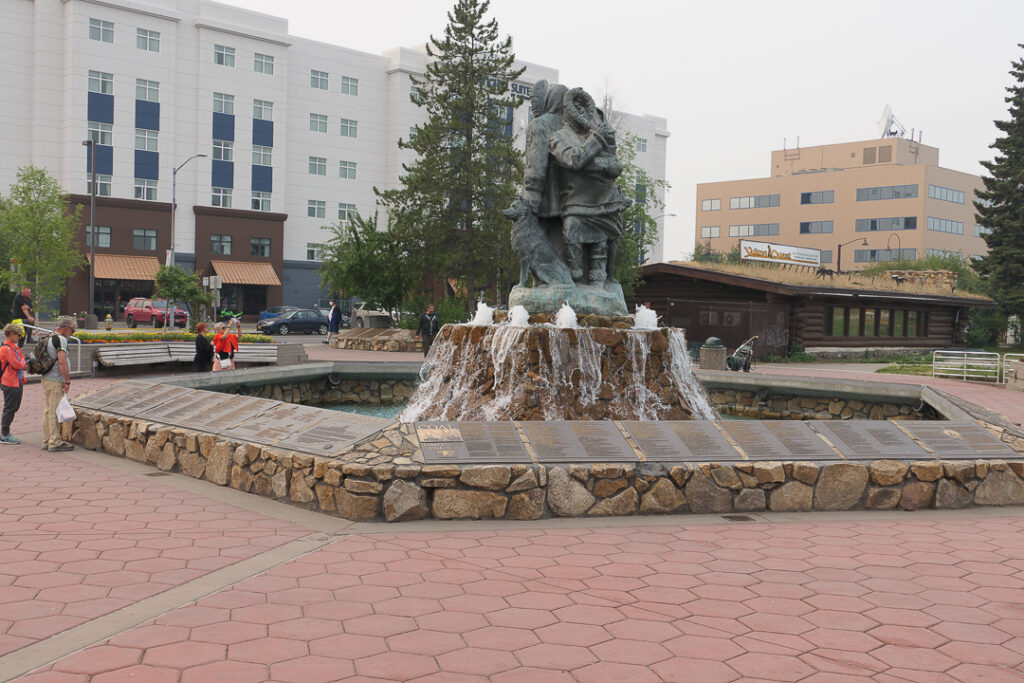 And there were flowers. 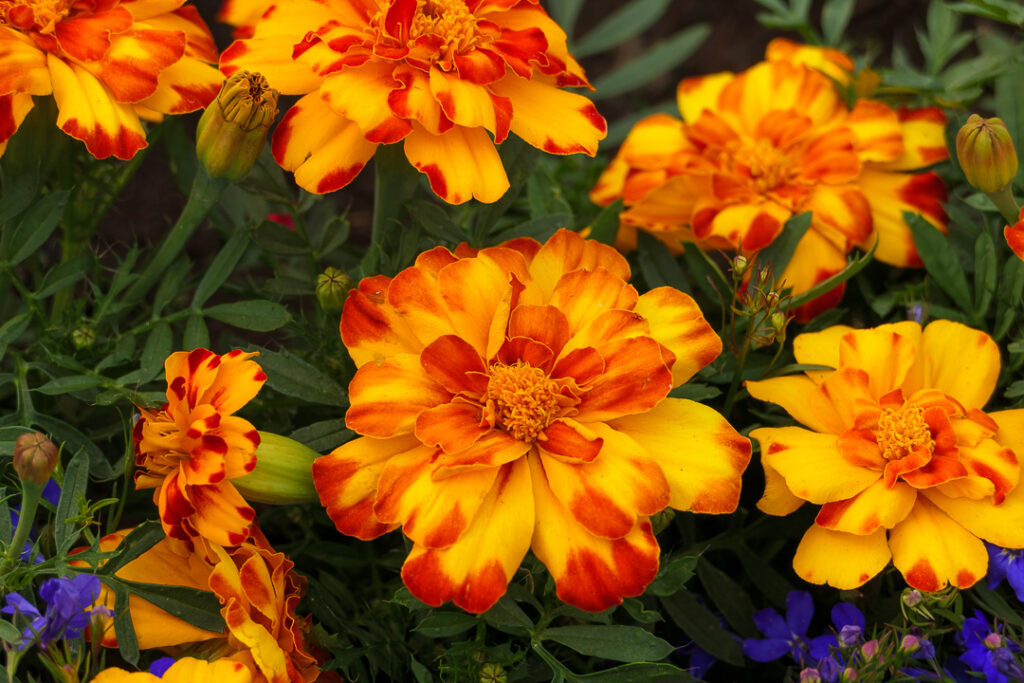 We left downtown on the 1st Street Bike Path and walked a couple of miles to Pioneer Park. Along the way, we passed more churches, like the St. Mathews Episcopal Church, which was originally built in 1905, burned down in 1947, and was rebuilt in the same pattern. 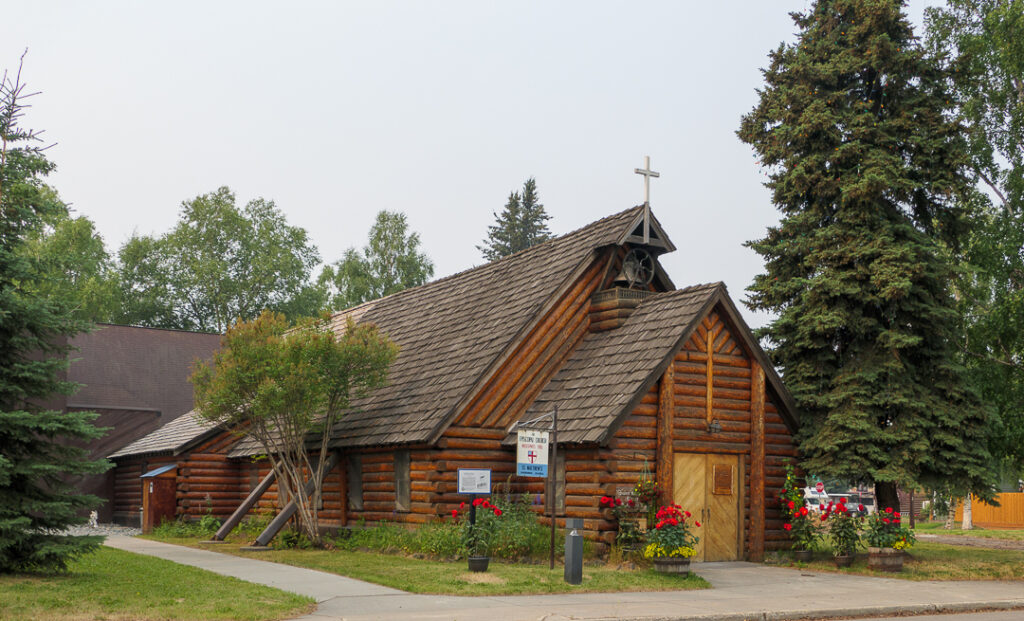 We also passed a power and steam heat plant, a water treatment plant, a hockey rink, none of which were particularly photogenic.

Pioneer Park was built for the Alaska Centennial Exposition in 1967 and is loaded with museums, shops, restaurants, and flowers. We had lunch at Souvlaki (recommended), visited the first checkpoint for the walk, and enjoyed the scenery. 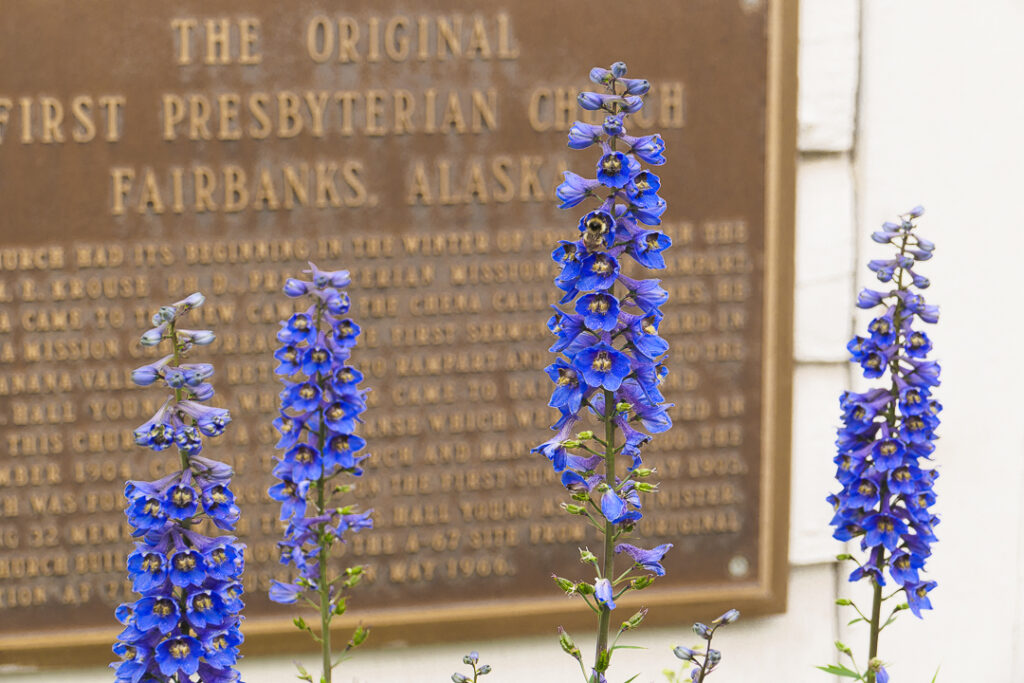 We even found a memorial totem pole. 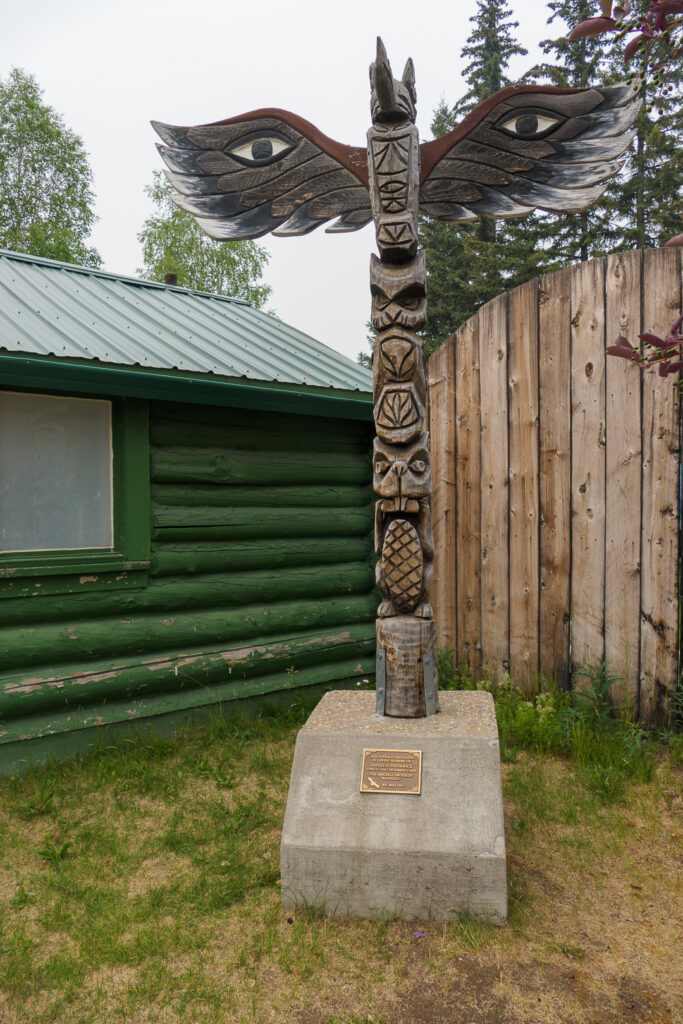 The return trip to town took us through a mostly-residential area with lots of historic houses. We walked past a wild park (sorry, it’s a “Natural Area”) and enjoyed the sculpture at Denali Elementary School. 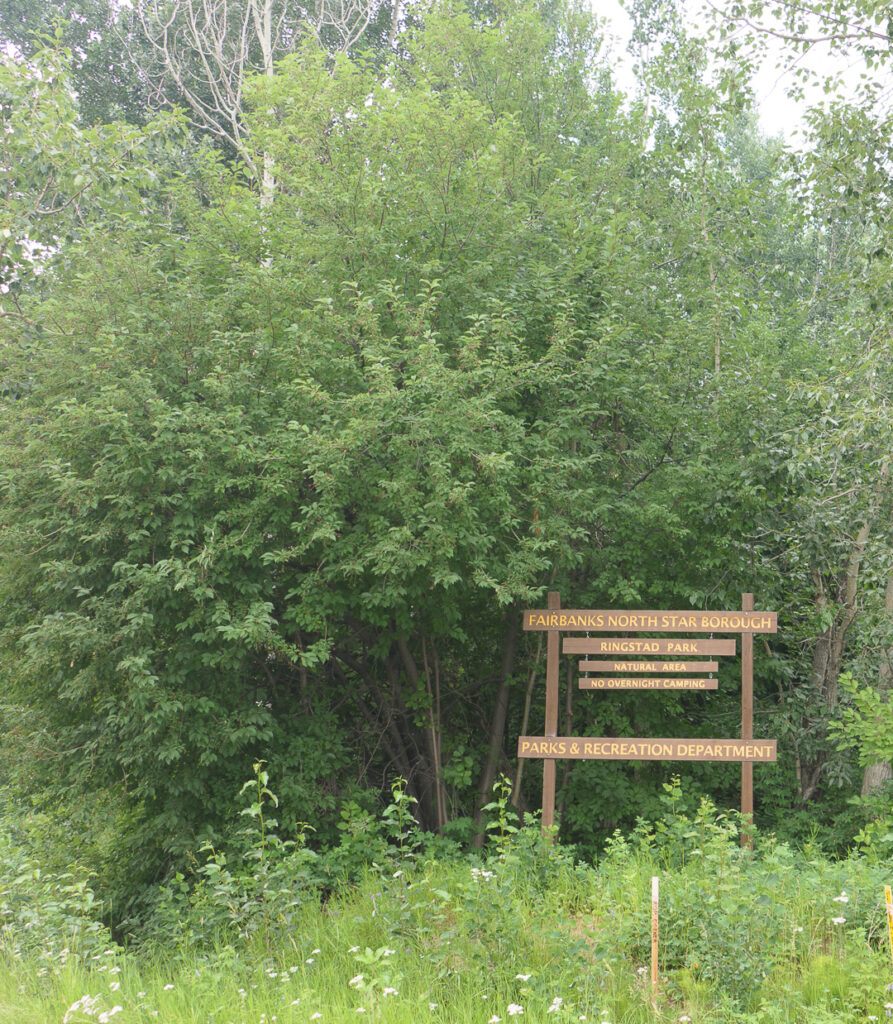 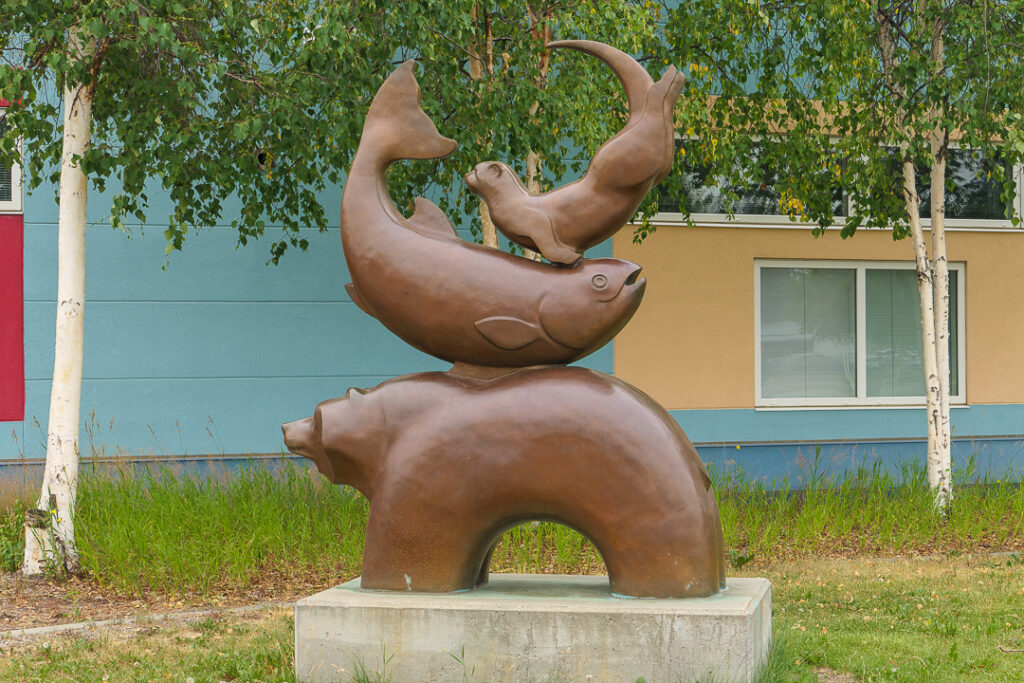 Once we were downtown, the walk took us past Fairbanks’ first skyscraper, the Northward Building, built in 1952 to alleviate the housing shortage. It was the first apartment building in town. 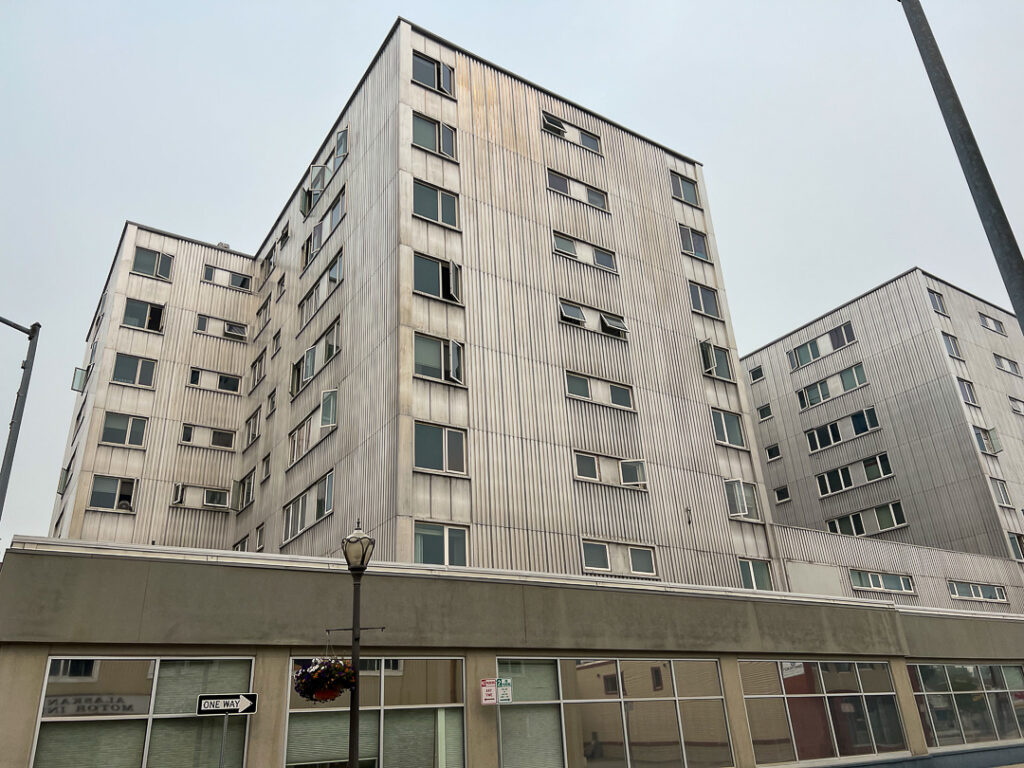 The second checkpoint of the walk was in the Clay Street Cemetery; we were getting tired (and the smoke was getting to us), so we didn’t stop for photos – instead, we went onward to the modern Morris Thompson Cultural and Visitor Center, which featured air conditioning, bathrooms, water, and wi-fi!

After we left the Visitor Center, the walk took us to a different part of Golden Heart Plaza, where we found a monument to a very different era. 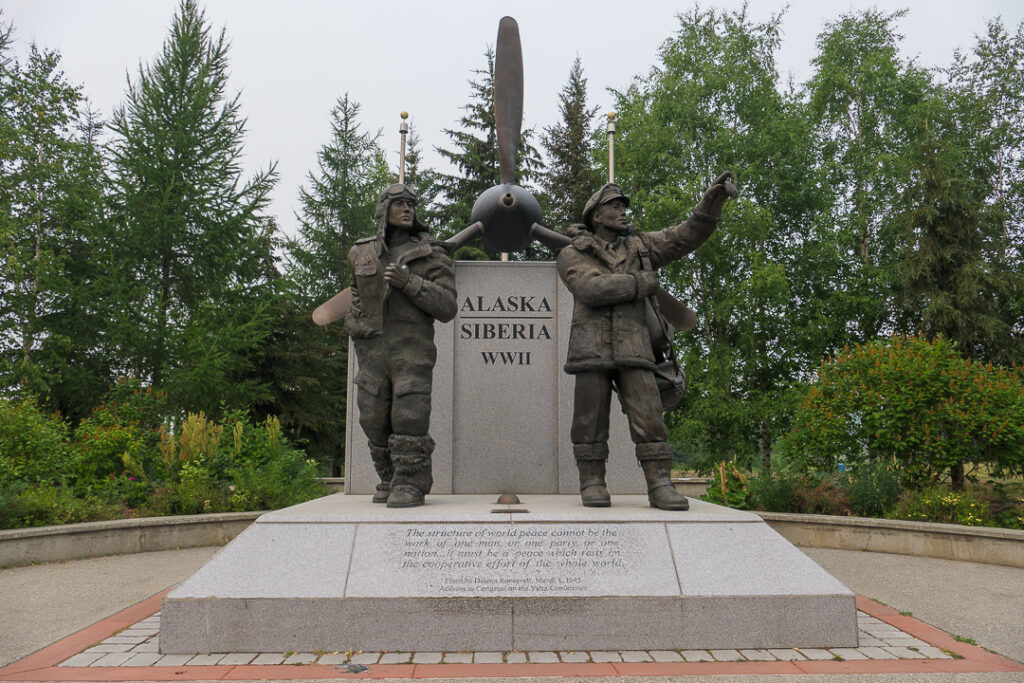 I saw a gleaming sculpture in the distance and we went over to it – it’s called Polaris and commemorates ice, quartz, and the Aurora Borealis. 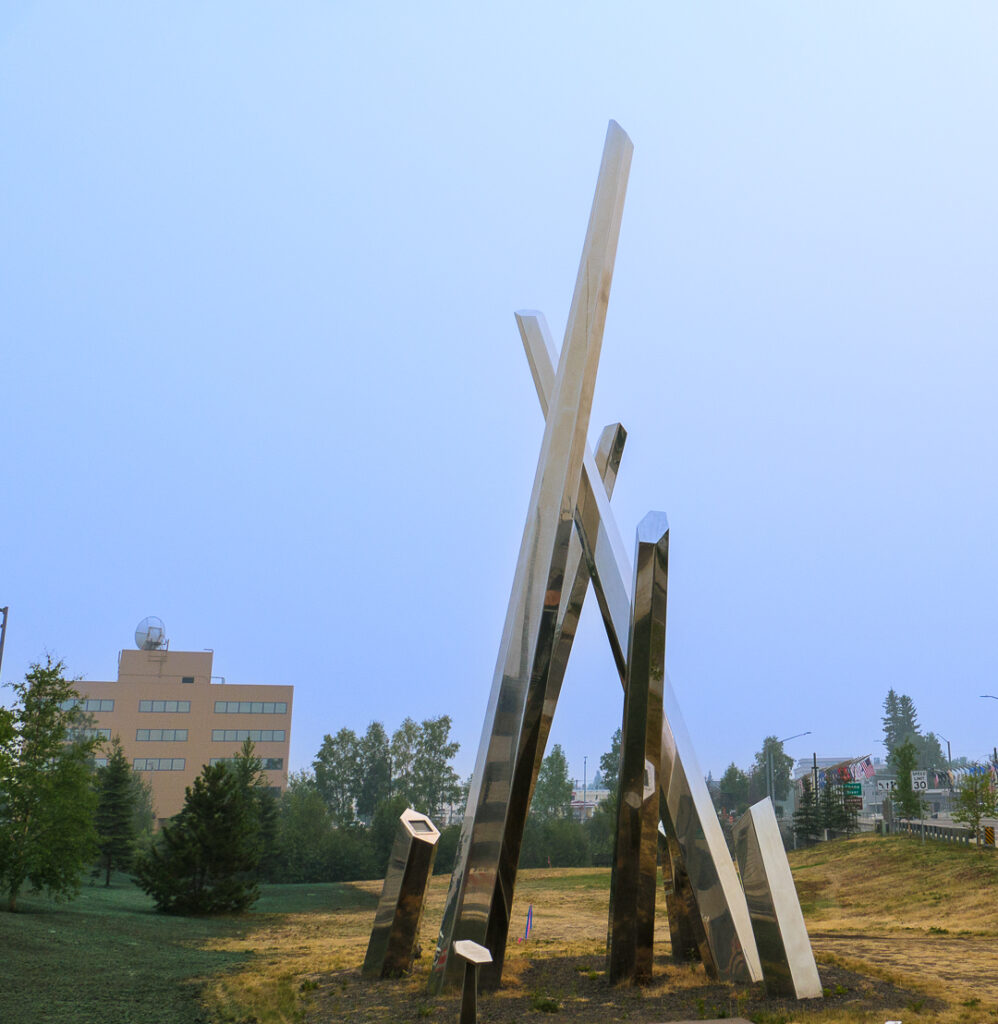 Unfortunately, that’s not what the sky really looked like – the smoke was thickening and the AQI was well into the unhealthy range, so the sky was an ugly gray. 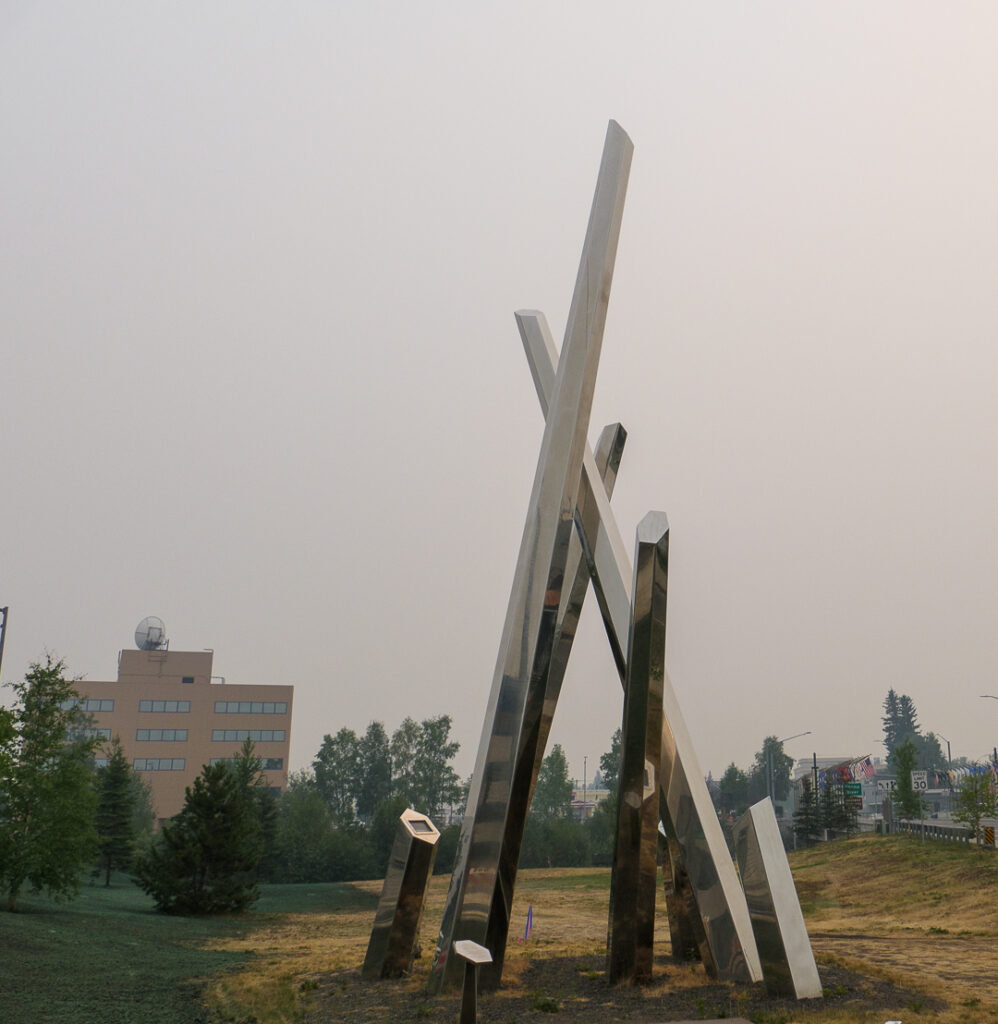 We finished the walk at Milepost 1523, the official end of the Alaska Highway. 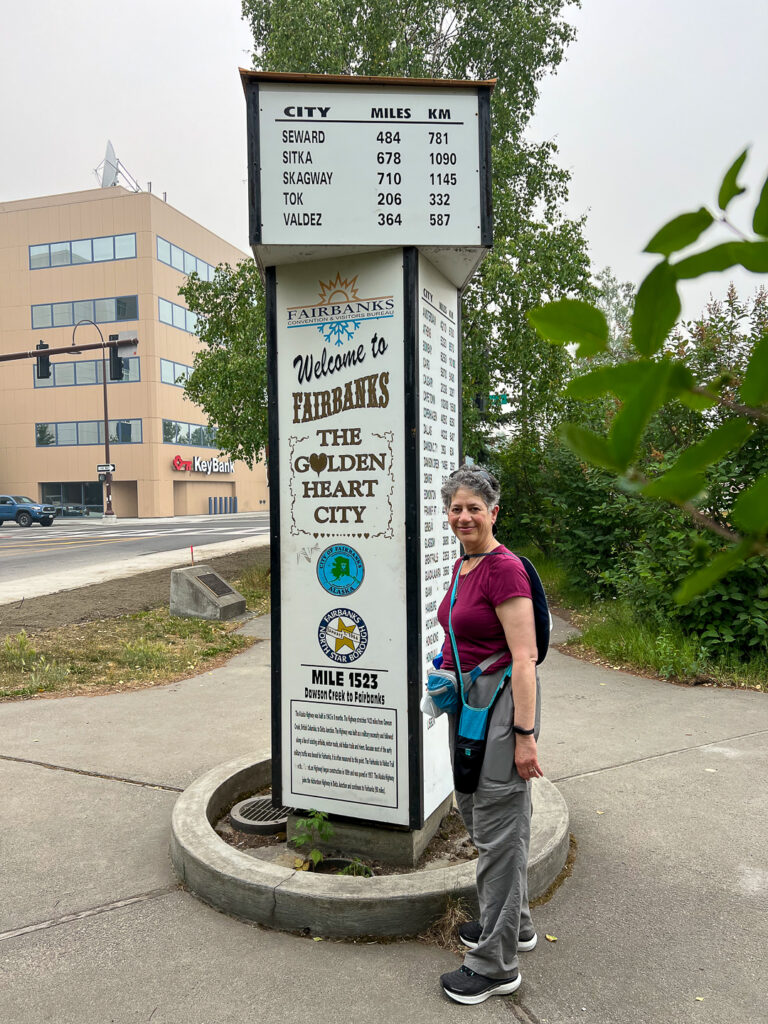 There’s lots more of Fairbanks to see, but this was a good way to get the flavor of the place. Several people stopped us along the way to chat and suggest places we’d enjoy visiting – it was almost eerie!

One thought on “Exploring Fairbanks on Foot”