I took an Amazon Fire Stick 4K with us to Hawaii last month so we could keep up with The Late Show with Stephen Colbert during our travels. I couldn’t find the remote control before we left, but I was sure I could use the FireTV app on my phone instead.

Wrong. It would have worked fine if the Fire Stick and the phone were on the same wifi network, but I couldn’t connect the Fire Stick to the resort’s network without the remote control. Eventually, I gave up and picked up a Fire Stick Lite at the Target on Kauai, which came with its own remote – the whole thing cost $16, and it let us watch Colbert.

I decided that today was the day I was going to find the remote. And I did – it only took two hours.

I started by taking the cushions out of the couch, where I found the VOX remote for our TiVo. I’d gotten that remote at the launch party for TiVo’s voice controlled products in 2017 and quickly decided that the voice control was a gimmick, so I went back to using my Logitech Harmony universal remote and forgot all about the VOX remote. I wonder how long it’s been in the couch?

I won’t bore you (or myself) with the other places I looked and all of the things I moved before I finally found the remote, less than a foot from where it should have been. 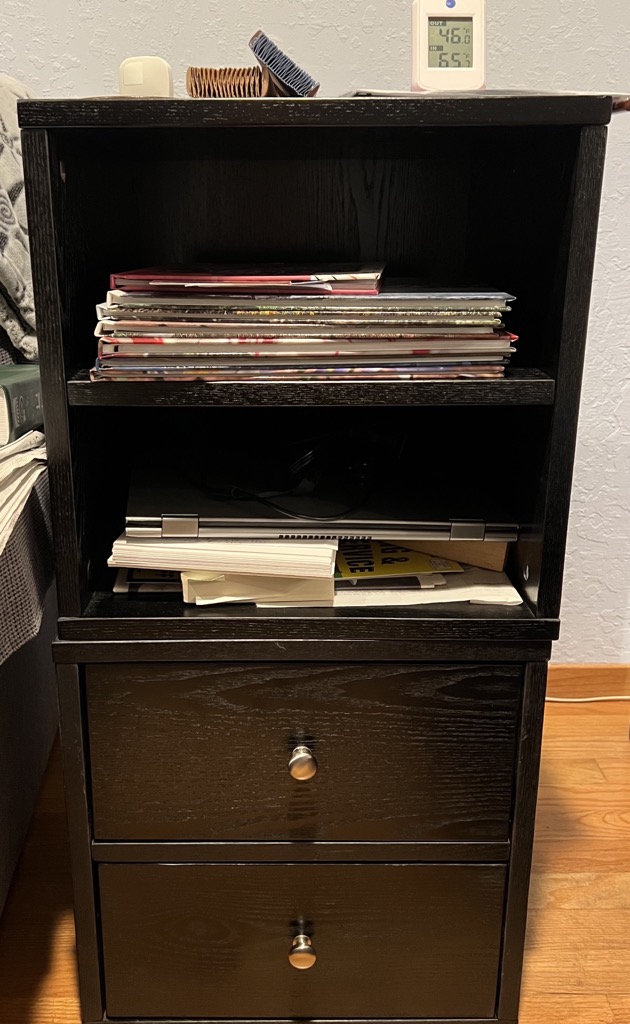 I keep all my rarely-used remotes (now including the TiVo VOX remote) in the pullout drawer third from the top in the photo above. The Fire remote was at the very back of the open shelf above that drawer. I’d looked on the shelf a few times, but today was the first time I removed everything, and there it was!

I put the remote and the Fire Stick 4K in my travel kit and I’m looking forward to using it the next time we’re in Hawaii. Know anyone nearby who wants a Fire Stick Lite?