We knew we’d have to get up fairly early on Monday to make our flight home, so we decided to practice by setting an alarm clock for Sunday morning, too. It wasn’t too painful.

Since Yelpers had praised Melissa’s breakfast, we decided to go there — our timing was great (maybe the clock was a good idea after all), since we didn’t have to wait at all, but by the time we finished, there were at least a dozen people waiting for tables. The food was OK (next time, I go for the waffle with blueberries), and the coffee was very good.

On our way back to the hotel, it started to rain — just a couple of drops, but as soon as we got to our room, the skies opened up. So we packed and checked out, borrowing an umbrella from the hotel for the rest of our time in Banff (and it worked wonderfully — we didn’t see another raindrop when we were outside…of course, we spend most of the time inside). We wandered around and did some shopping (not much buying, though); then we had lunch at Evelyn’s Coffee Bar. I thought about having dessert there, but I’d had my eyes on Cows the entire time we’d been in Banff; they had reviews in their window calling them out as equal or even better than Bertillion in Paris, and I was ready to put them to the test. They didn’t come close to living up to the reviews, but the ice cream was perfectly acceptable; nonetheless, I’m going to go elsewhere next time I’m in Banff.

And with lunch and dessert finished, we decided it was time to hit the road. Our rental car, a Toyota Matrix, didn’t have a cargo cover, so I was reluctant to go anywhere busy, but we weren’t quite ready to go to the airport, either. We decided to drive the Minnewanka Loop, which turned out to be a nice way to cap off our visit. We drove to Lake Minnewanka. We didn’t have the time (or the cargo cover) for the lake cruise, but just walking around the section of the lake near the parking was very enjoyable and scenic. 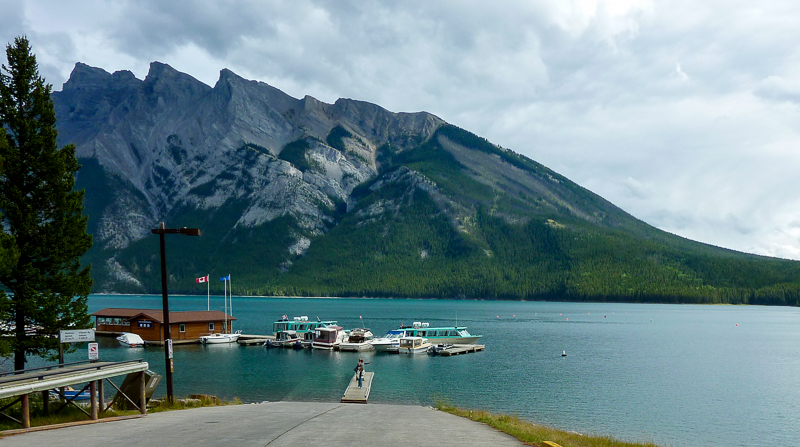 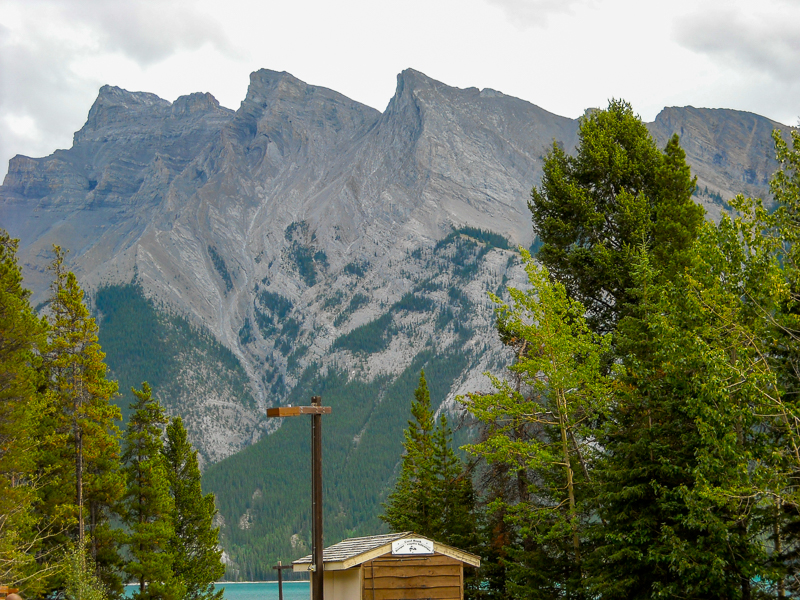 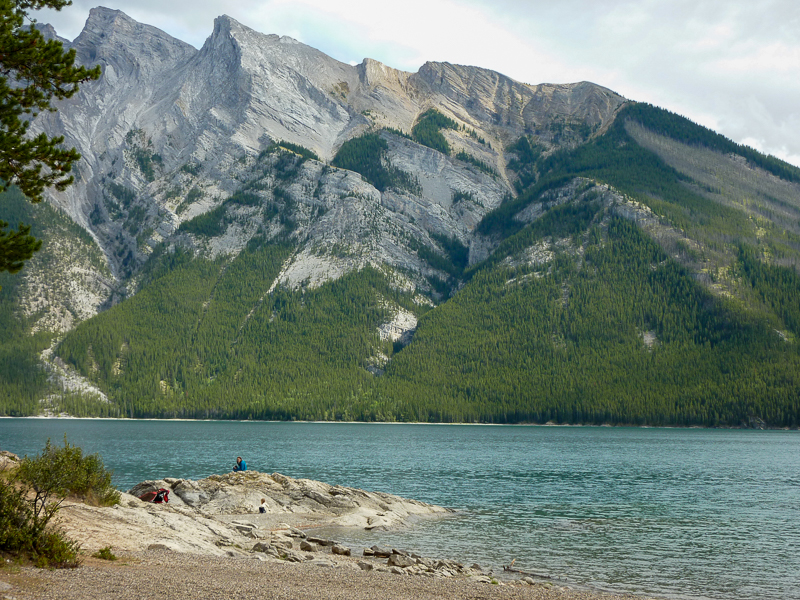 When we left, we decided to finish the loop instead of driving right back to the highway; we didn’t get very far before running into a goatjam on the road, so we parked and took a few photos, too. 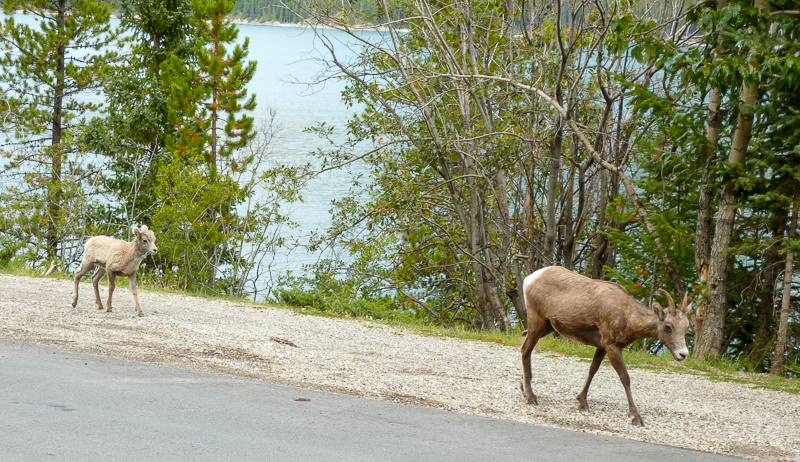 We made one more stop on the loop, near mountains whose name I don’t know. 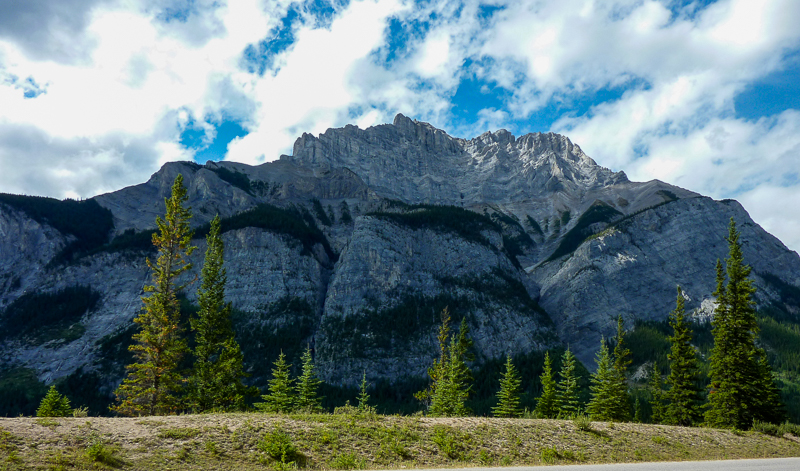 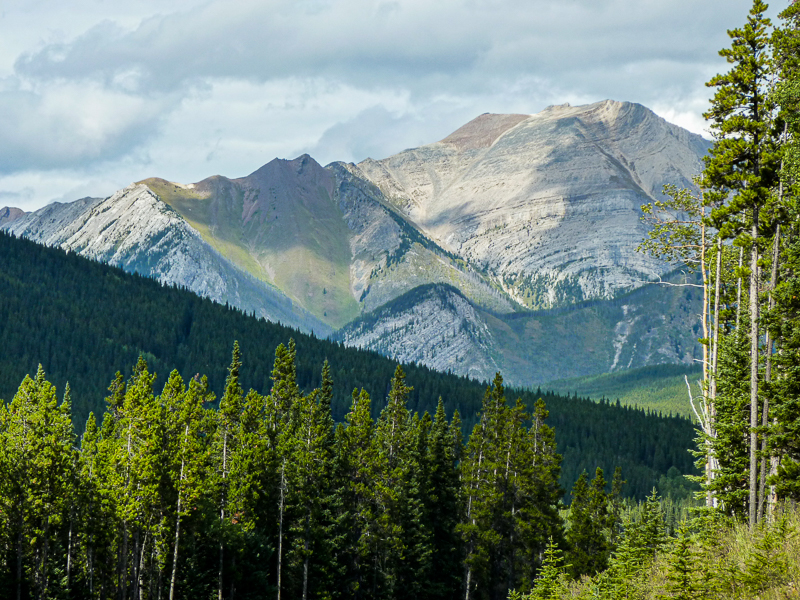 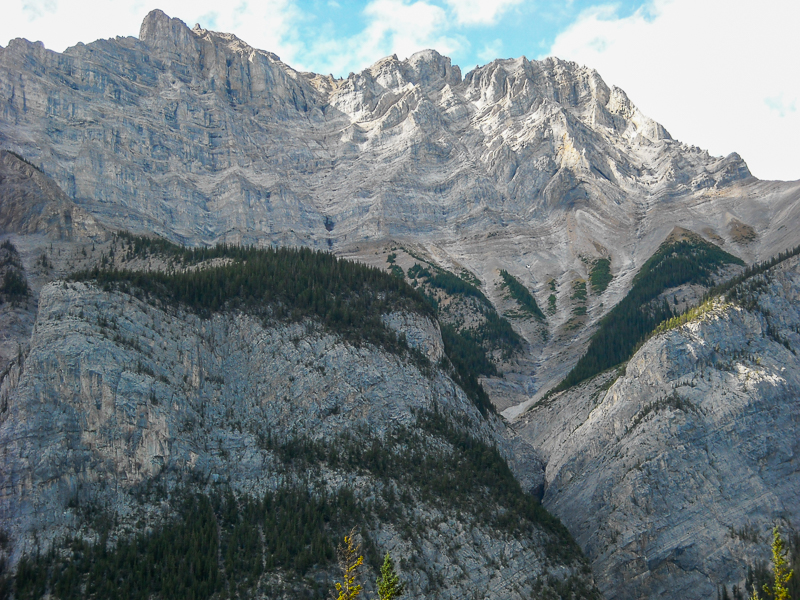 And then it was time to return to civilization. Soon enough, we were back at Calgary Airport and ensconced in our room at the Delta Calgary Airport Hotel, which was pleasant enough, though the views left everything to be desired after three nights in Banff. We’d returned our car, so we were limited in our dining options; the airport didn’t entice, so we ate dinner at the Compass Restaurant in the hotel, which was somewhat overpriced and too noisy (thanks to the TV in the YYC Lounge, adjacent), but tasty enough.

And that was basically the end of the trip; Monday morning, we walked across the road to the terminal, checked in, cleared customs, and flew back to SFO, picked up our car, had lunch, and drove home. No excitement, no photos.