The hotel provided a great buffet breakfast in their open-air restaurant – we chose to sit outside in the shade to enjoy the atmosphere. After breakfast, we met our guide for the day, Frank, and got on the bus for Doka Coffee Estate on the slopes of the Poas Volcano. 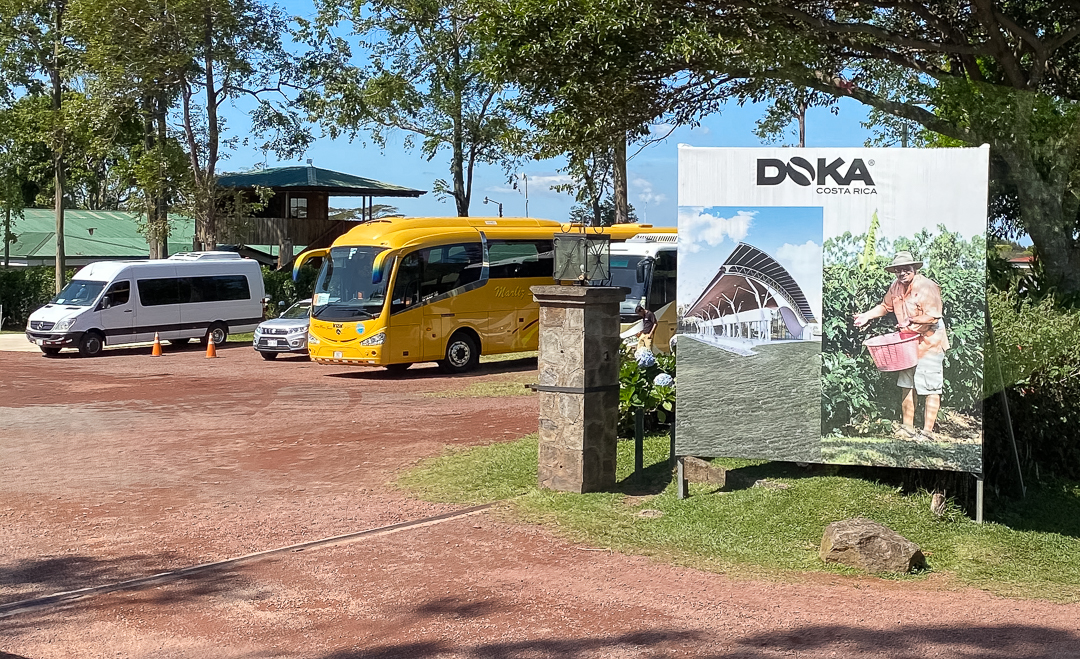 We started with a cup of iced coffee with cinnamon, milk, and chocolate in their snackbar. 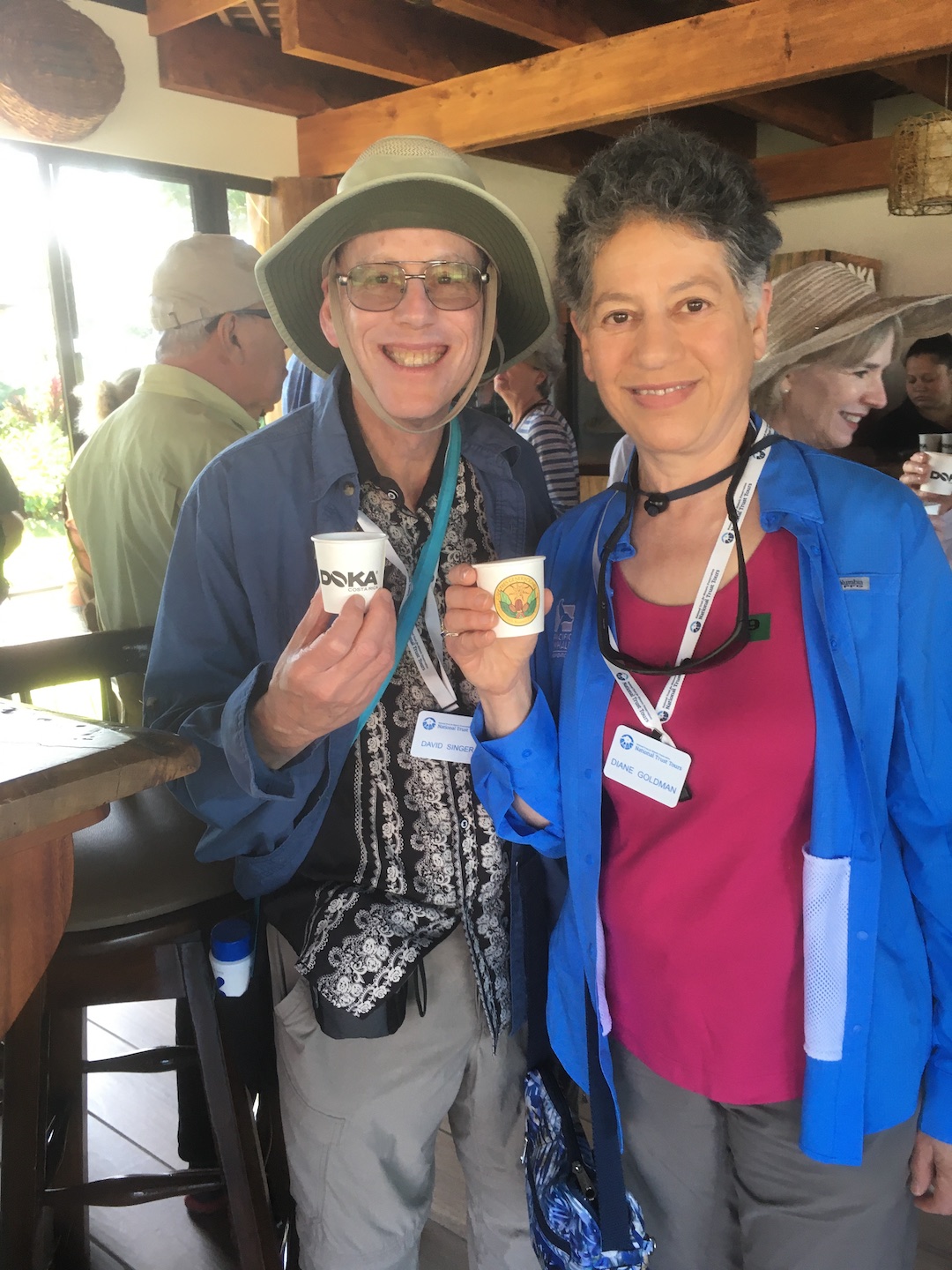 Jonathan from Doka took us on the tour of the plantation and processing facility. Ripe coffee cherries are red, and there are typically two beans per fruit. The pickers use the red baskets to collect the cherries; each plant is visited multiple times as beans become ripe. They are paid by weight ($2 for 13 kilos) and a good picker can pick more than 150 kilos in a day. Most of the pickers are from Nicaragua because picking doesn’t pay enough for Costa Ricans! 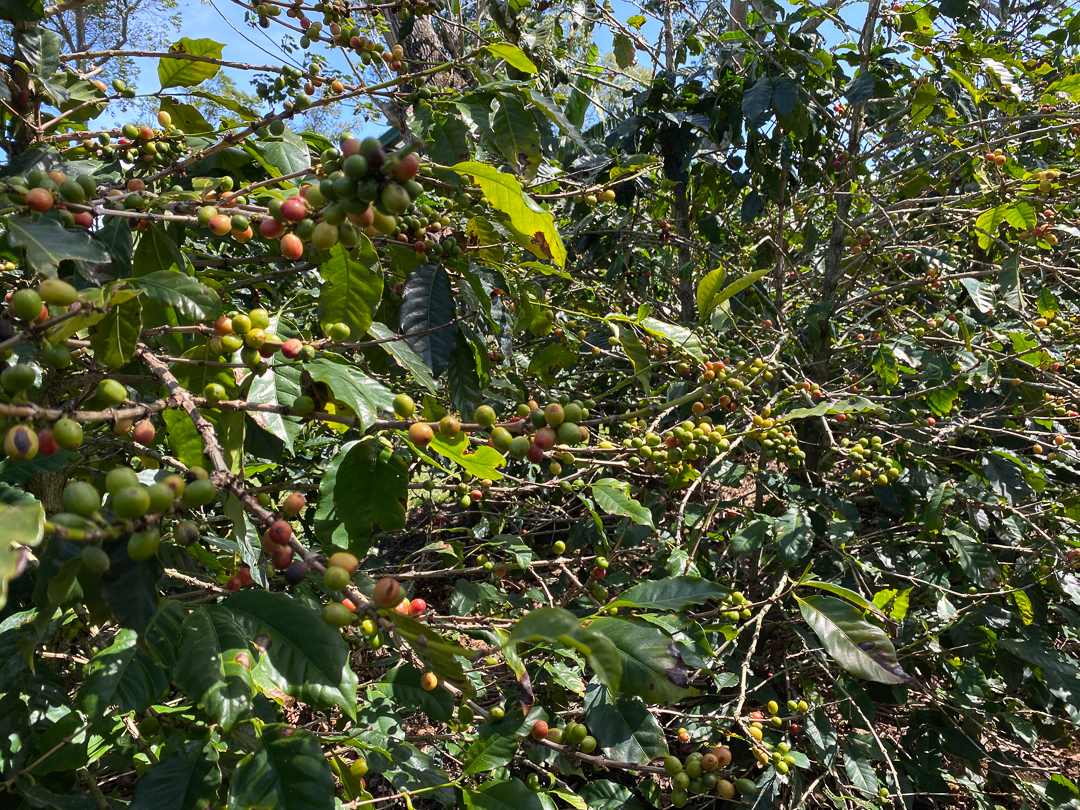 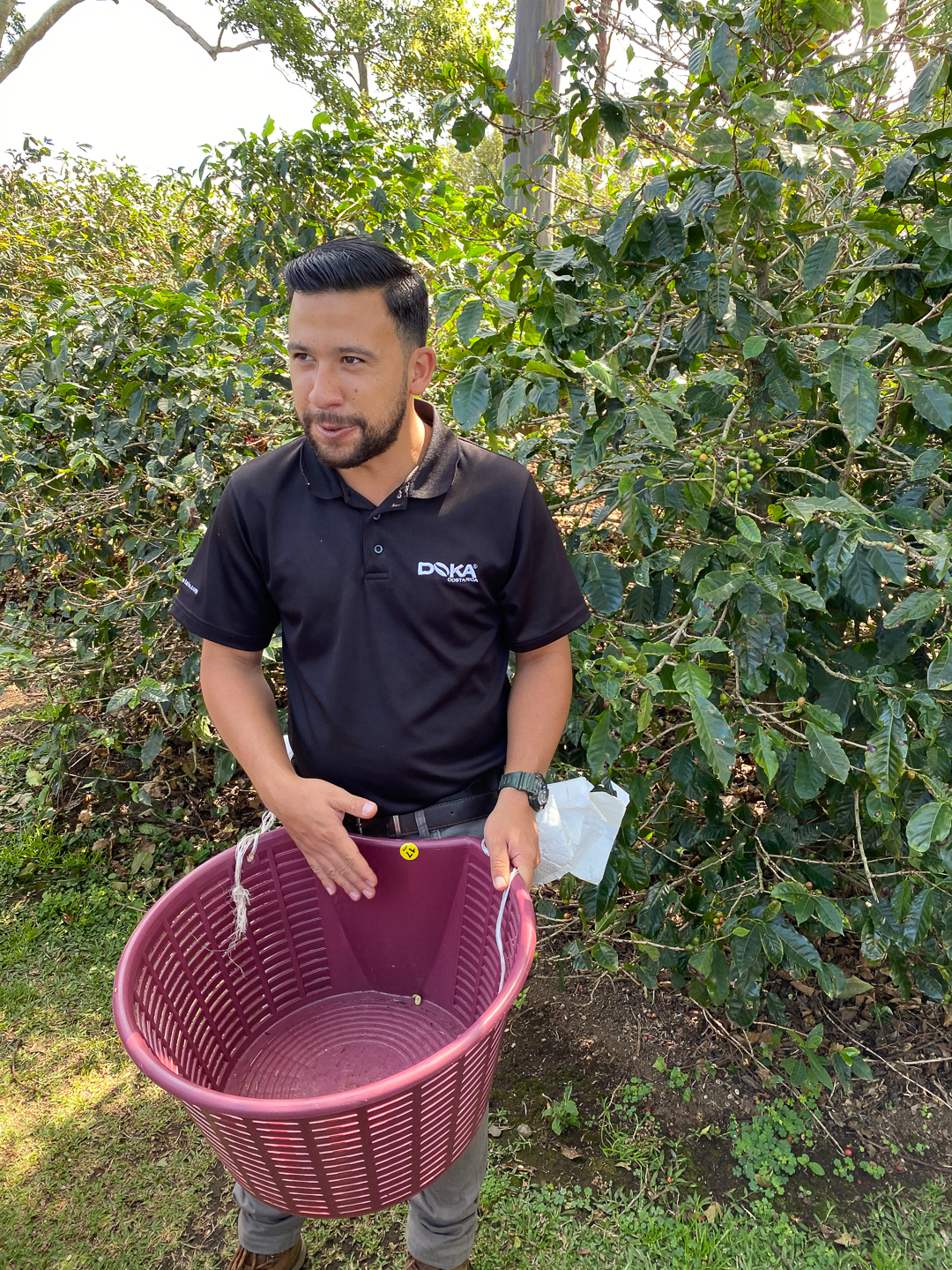 The processing starts in the coffee receiving station – they drop the beans in the water to separate them by weight and density. The heaviest beans are the highest quality, but nothing is wasted.

The next step is “coffee peeling” – the machines use friction to remove the pulp from the fruit and sort by size. 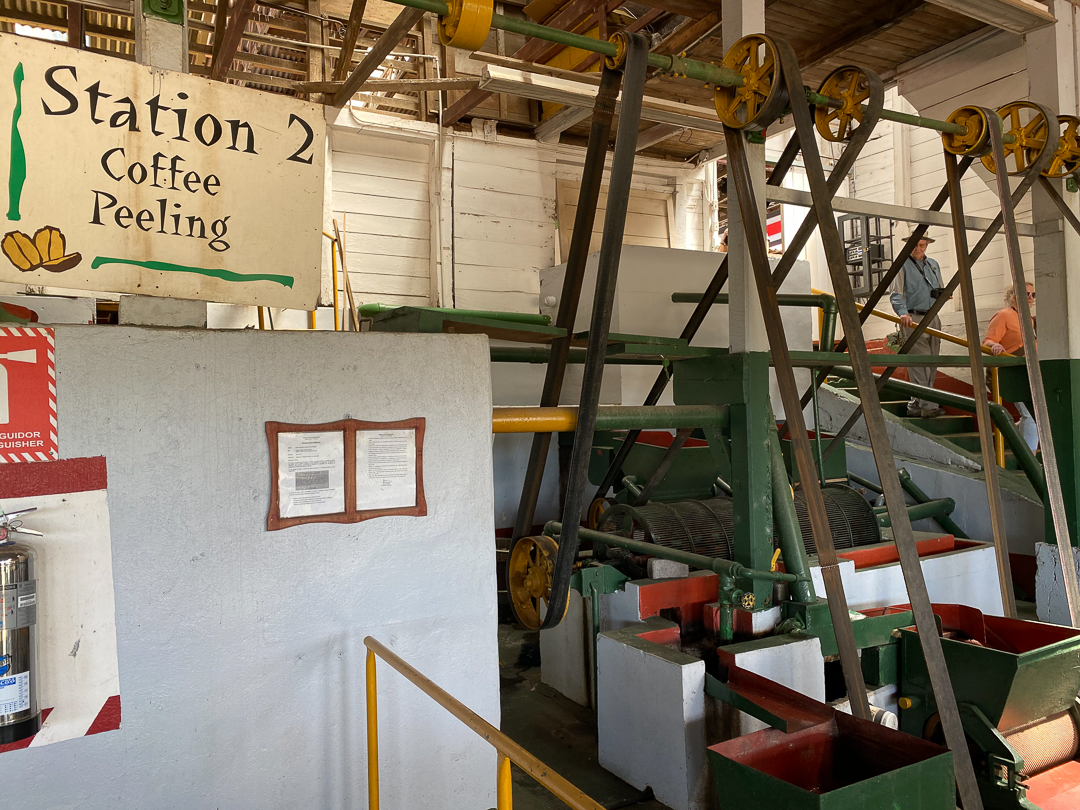 The beans then ferment for 32 hours and are taken outside to dry in the sun, followed by mechanical drying. 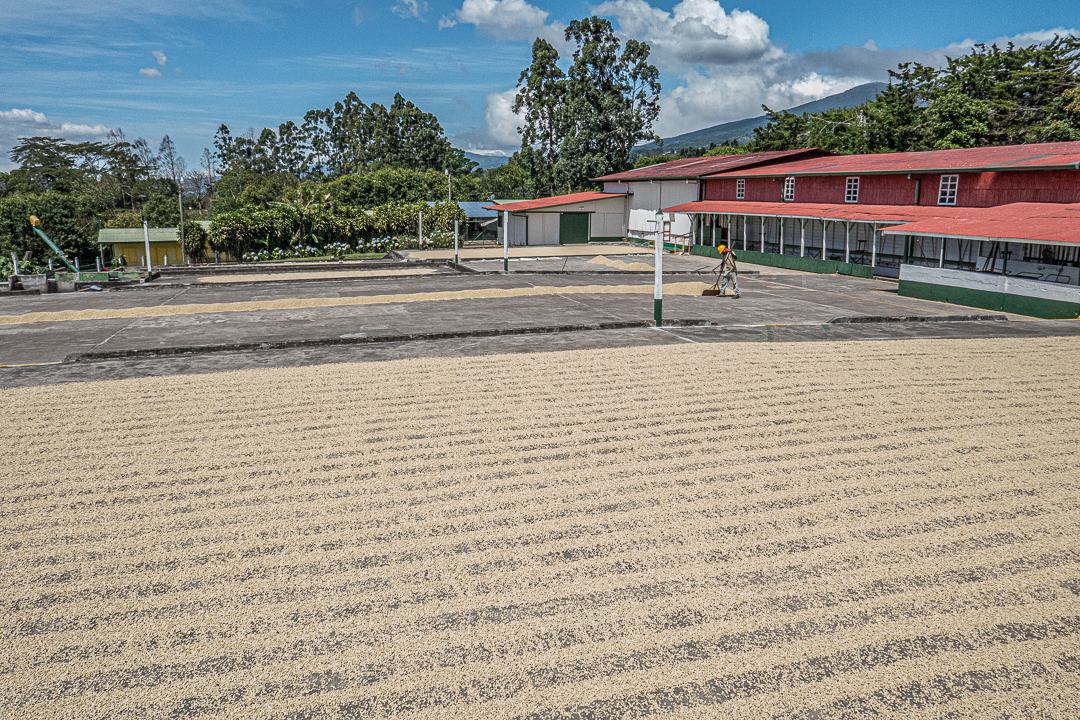 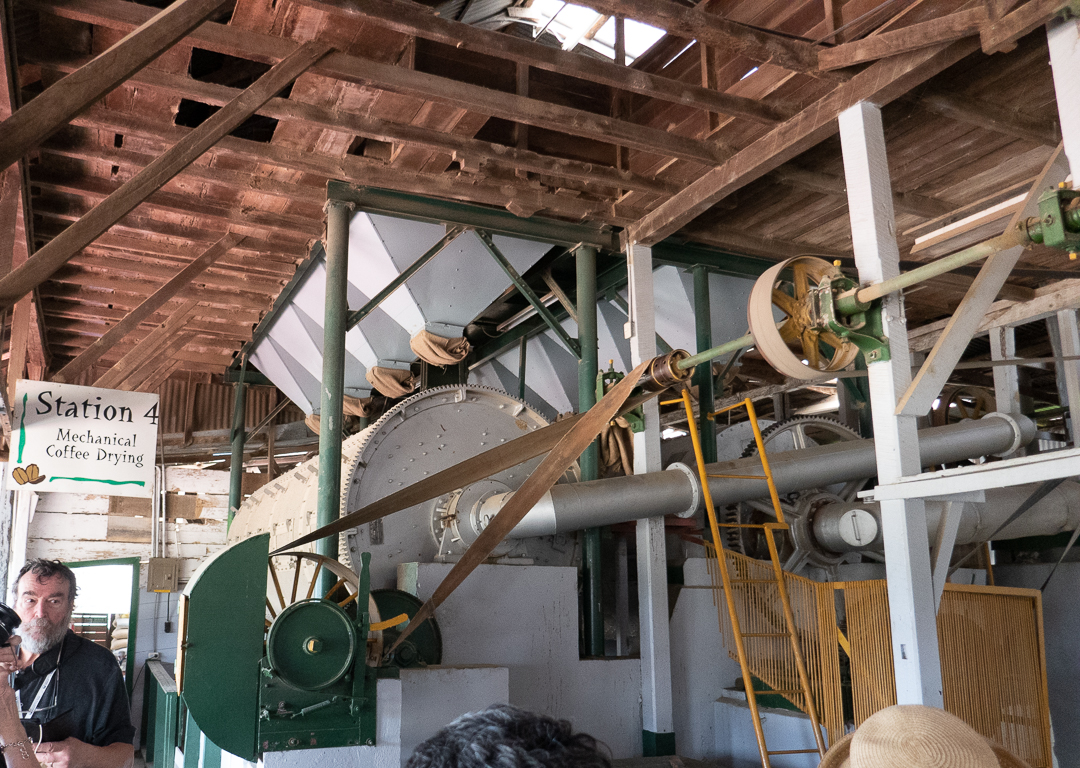 The coffee is then bagged and rests for four months. 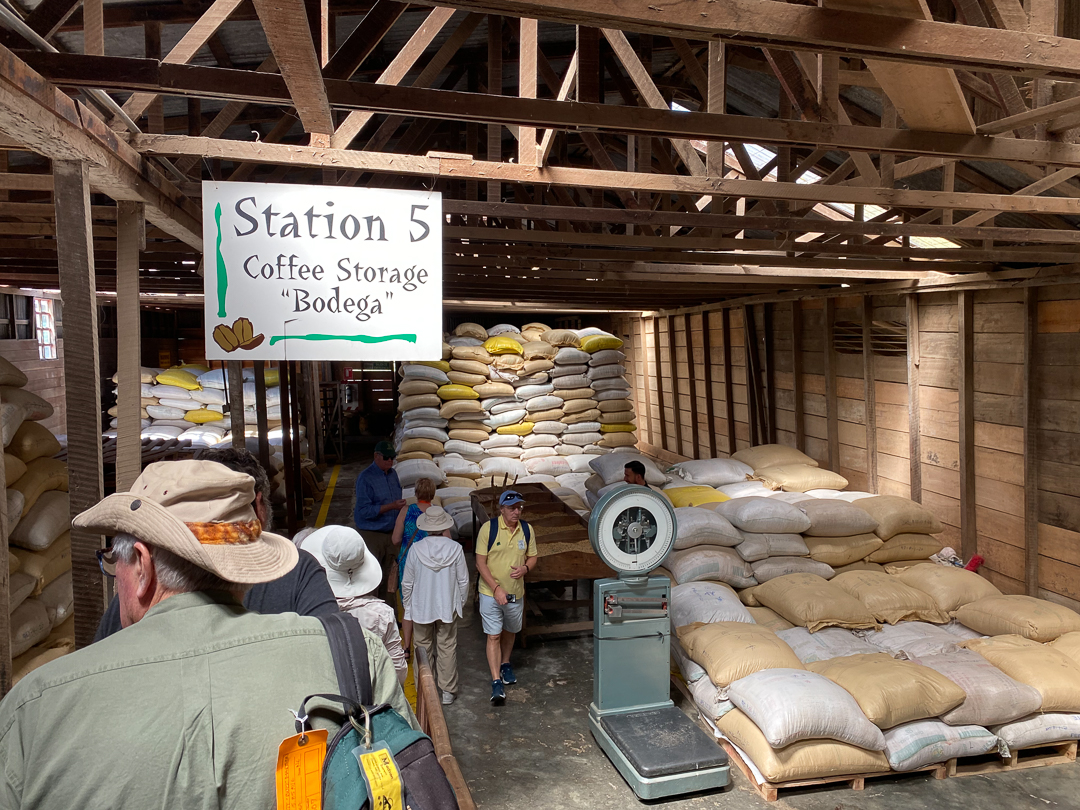 Most of the coffee is exported unroasted, but they roast some for their own line, “Cafe Tres Generations” which is sold locally (and also available online). Low-quality beans are sold unroasted into the local market. I bought a bag of roasted beans to bring home.

We left Doka just before noon and Frank passed out some snacks to tide us over on our trip to SibÃ¶ Chocolate. I was surprised to notice that the cassava chips were Kosher, complete with the Orthodox Union’s hechsher! 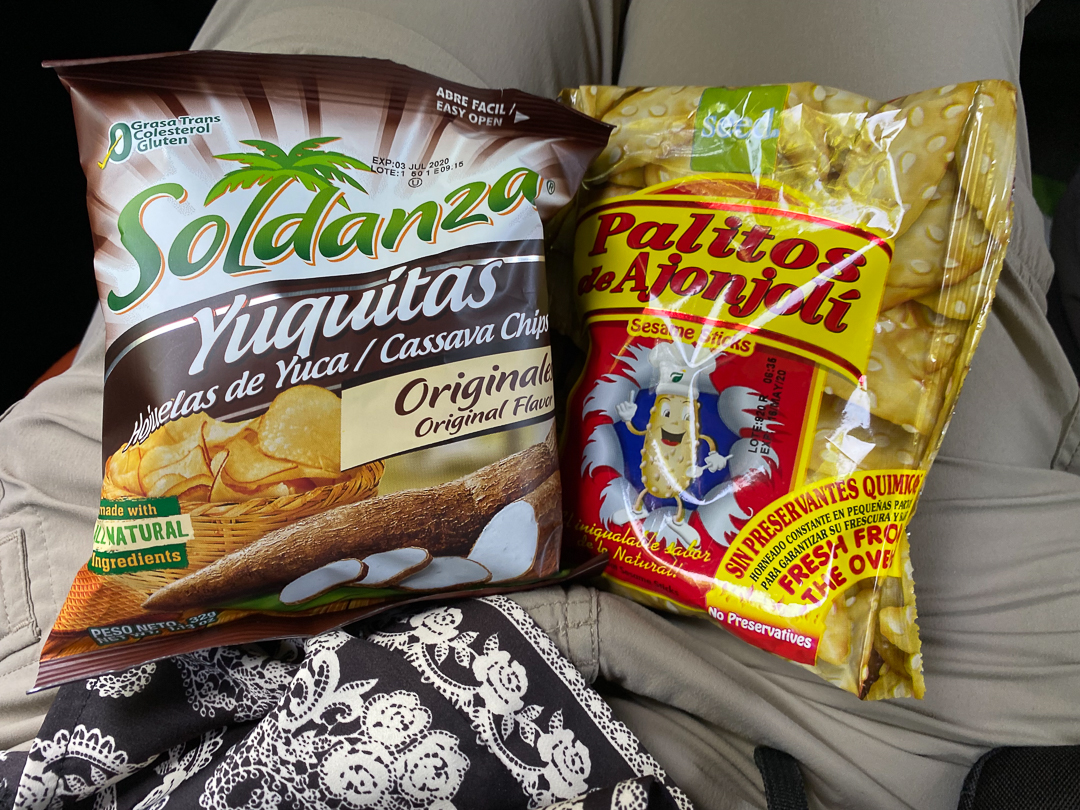 The trip was uneventful, except for one hairpin turn when the bus stopped, hanging over the edge of the road. Frank had to get out and direct the driver around the bend. 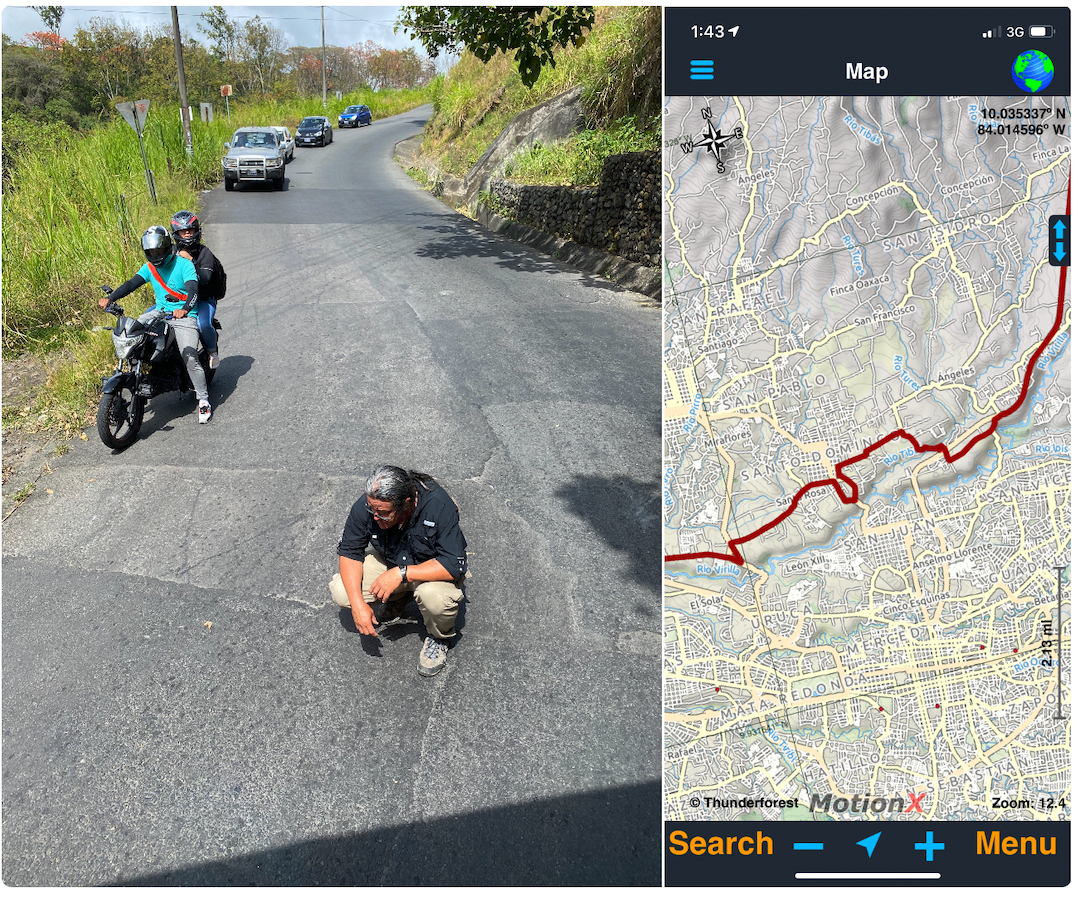 We arrived at SibÃ¶ Chocolate a few minutes later; it had started raining, so we dashed inside for lunch and the “Chocolate Experience”. 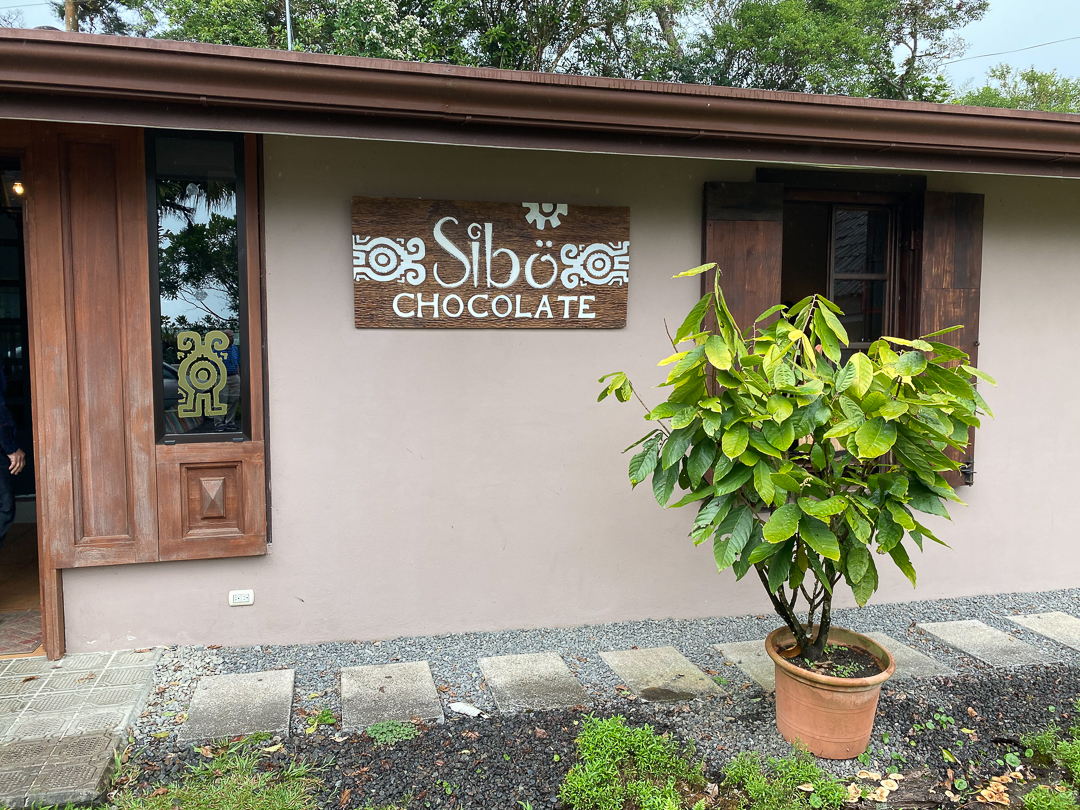 Lunch was delicious, but it wasn’t the main attraction – we were there for chocolate, and the owners (Jorge and Julio) obliged with a 90-minute presentation and tasting. 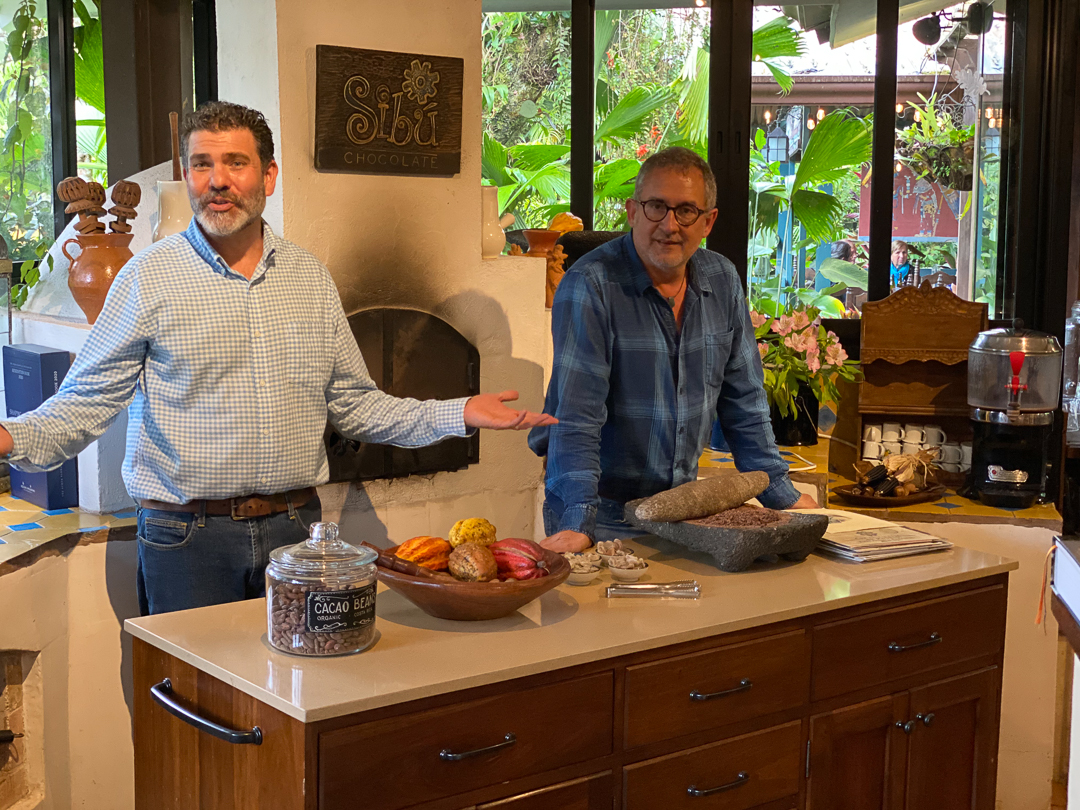 We began with a fresh cacao bean (and instructions to suck on it, not bite it). 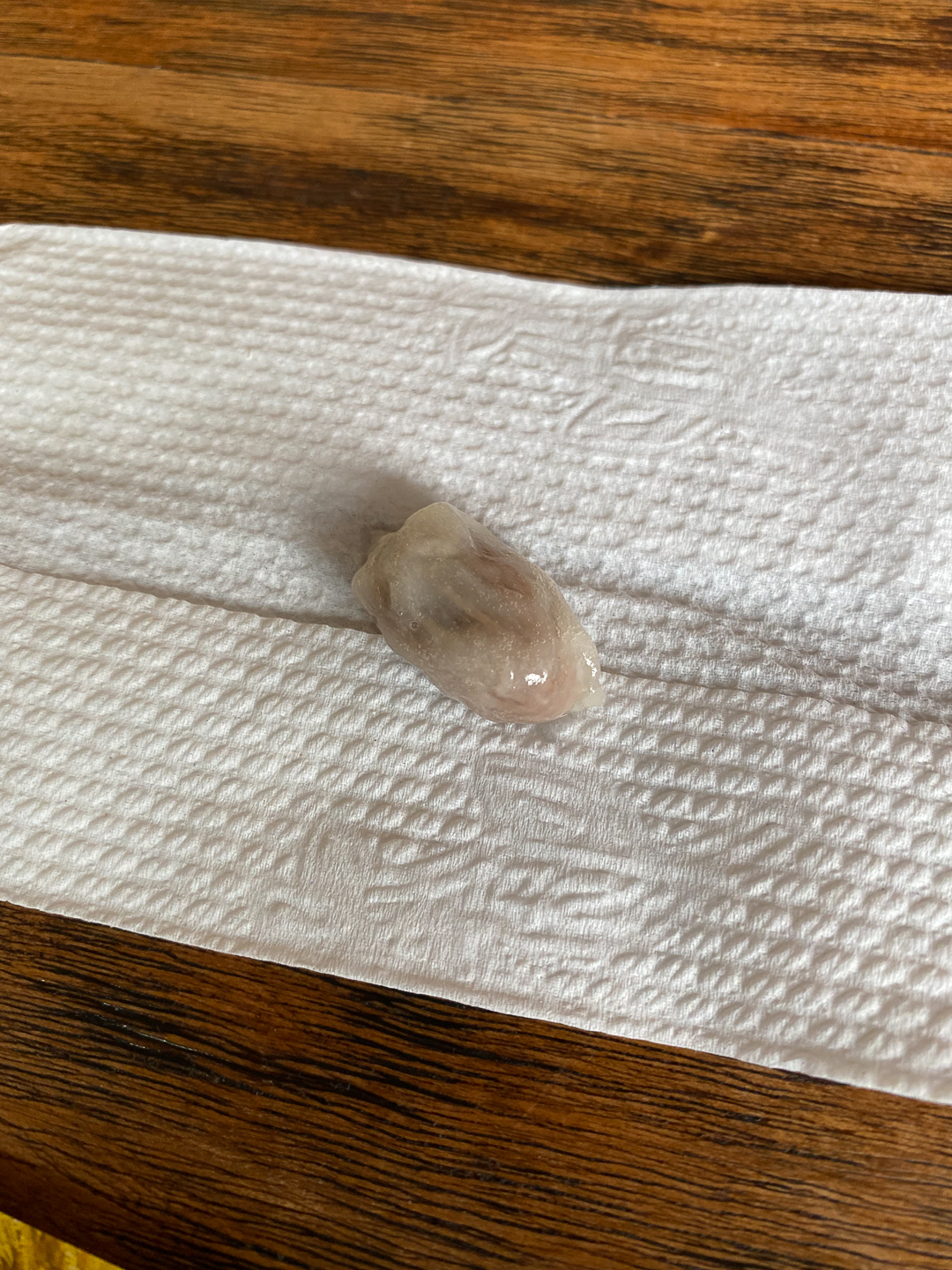 It had a slightly fruity taste and was slimy – not what I expected! As the tasting continued, they told us about the history of chocolate around the world and especially in Costa Rica. Along the way, we enjoyed a reconstructed Mayan chocolate drink (supposed to be an aphrodesiac and a cure for Montezuma’s Revenge), but the main attraction was a selection of six truffles made by SibÃ¶.

We brought a few bars of their chocolate back to the hotel – none survived the entire trip, of course.

We finished the evening in the Executive Lounge at the hotel, talking with one of our new friends, Desi (who was the host for the Nebraska group on the main trip). 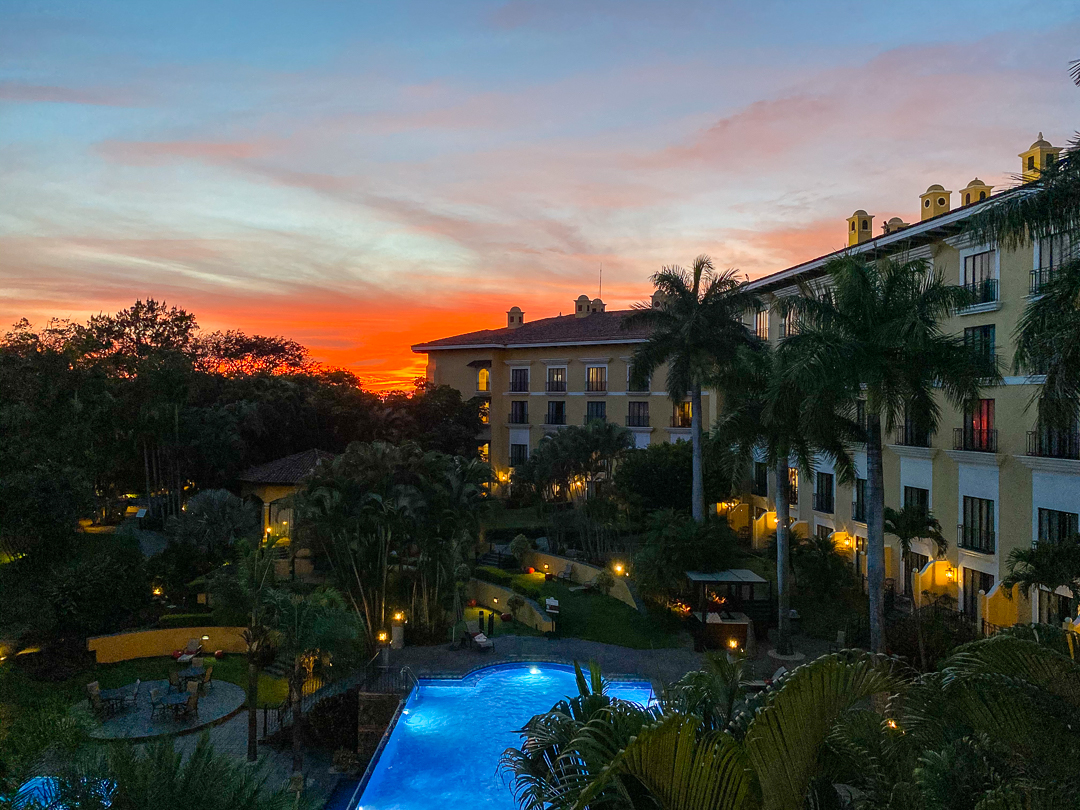