We had breakfast in the Plaza Court here in the St. Regis; I’m glad I’m have Titanium status or it would have been really expensive!

After breakfast, we walked down to Radio City Music Hall to start the Central Park Volksmarch. 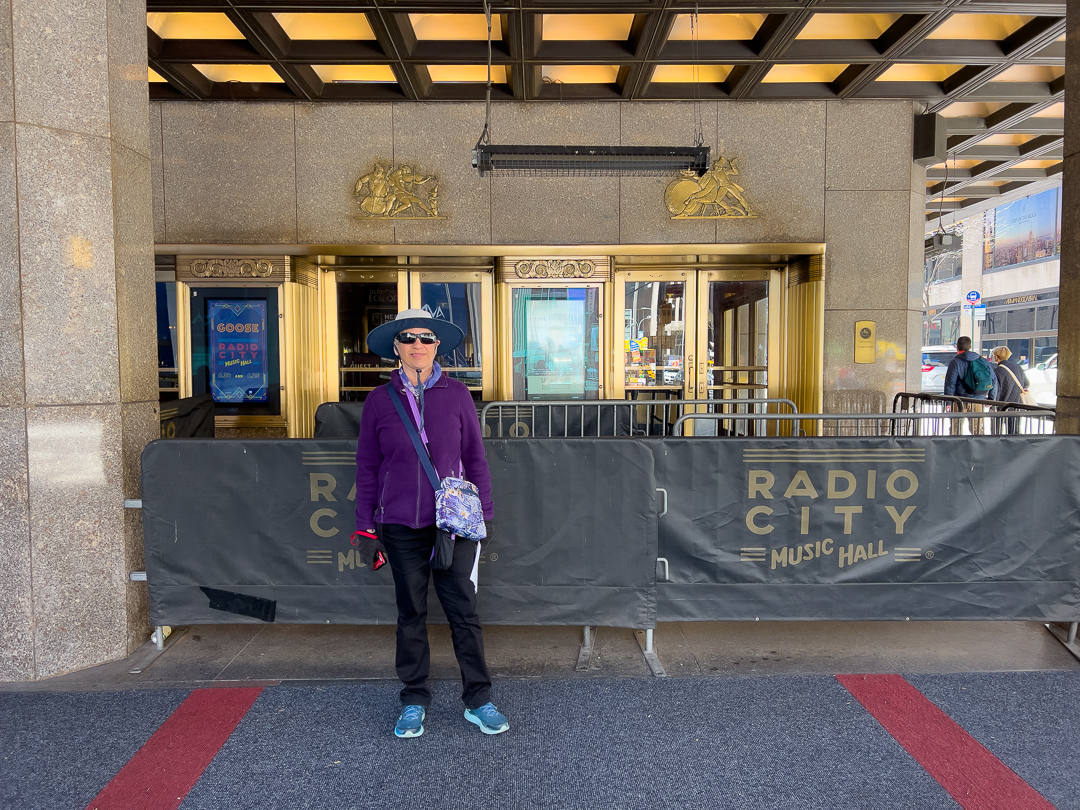 The first instruction took us right back 6th Avenue to the park; en route, we saw one of many street corner Covid testing places. This one looked more respectable than most of them did. 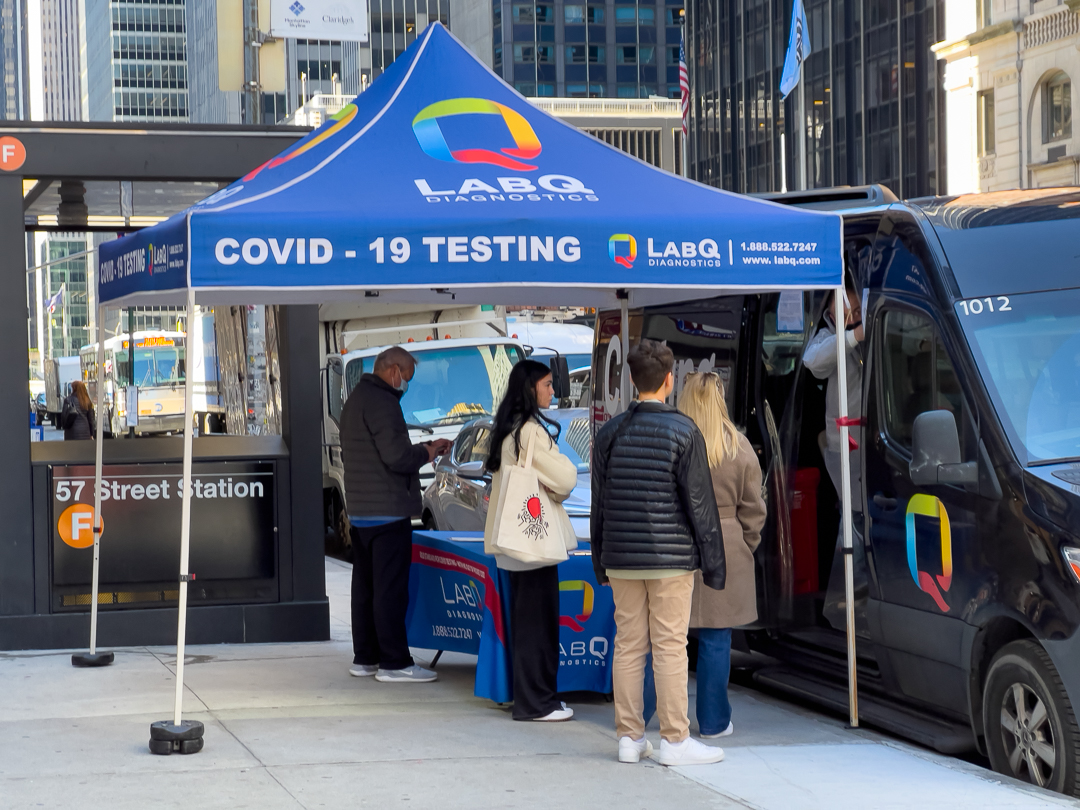 Soon enough, we were in the park at the General Sherman statue at Grand Army Plaza.

Diane and I had both attended IBM’s Systems Research Institute in the early ’80s; it was a ten-week session in Manhattan, so there were ample opportunities to explore the city. But neither of us did much exploring of Central Park – it was not considered terribly safe territory. Things have changed for the better! 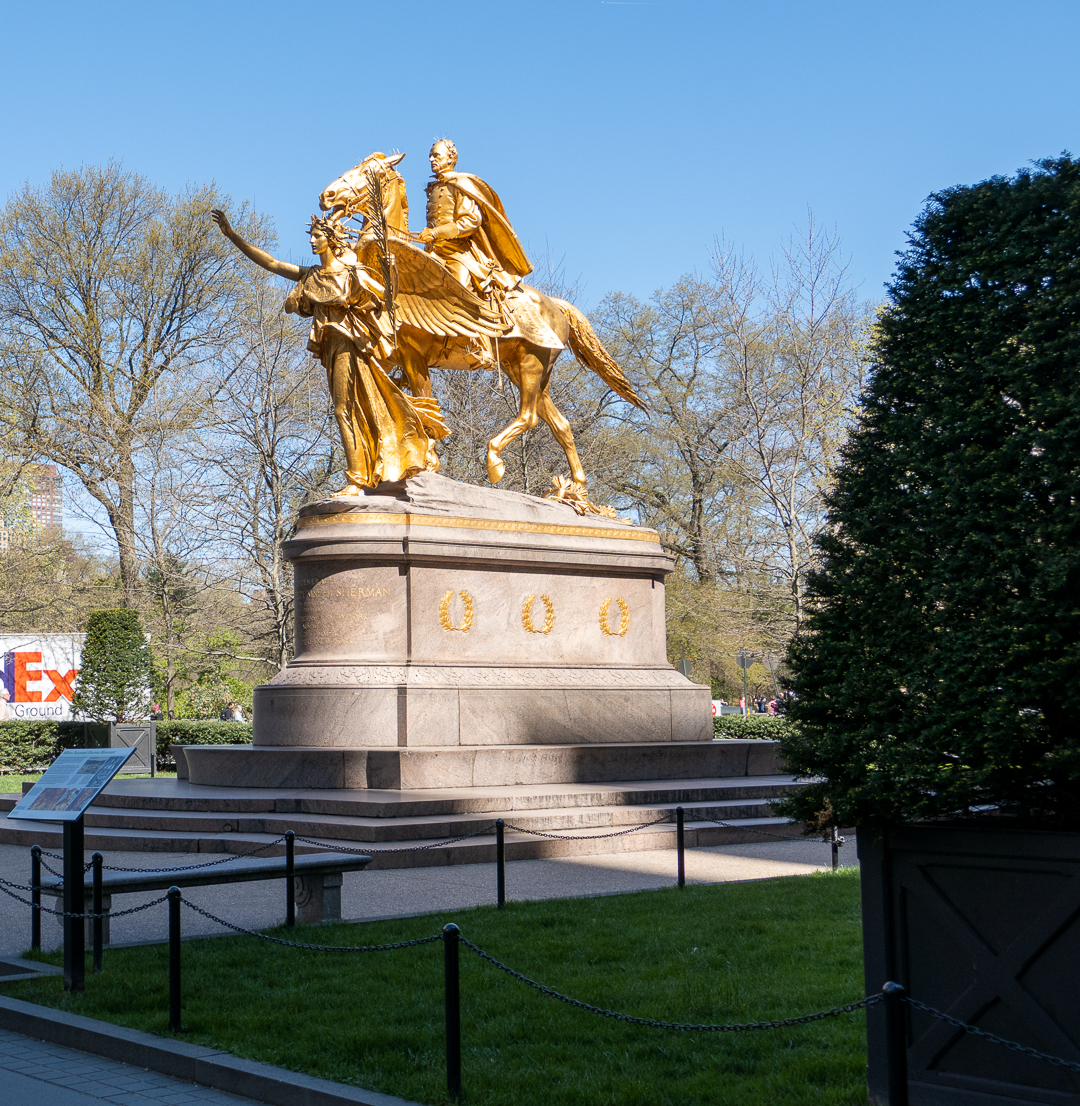 There was a temporary statue of Diane Arbus at the entrance to the park. 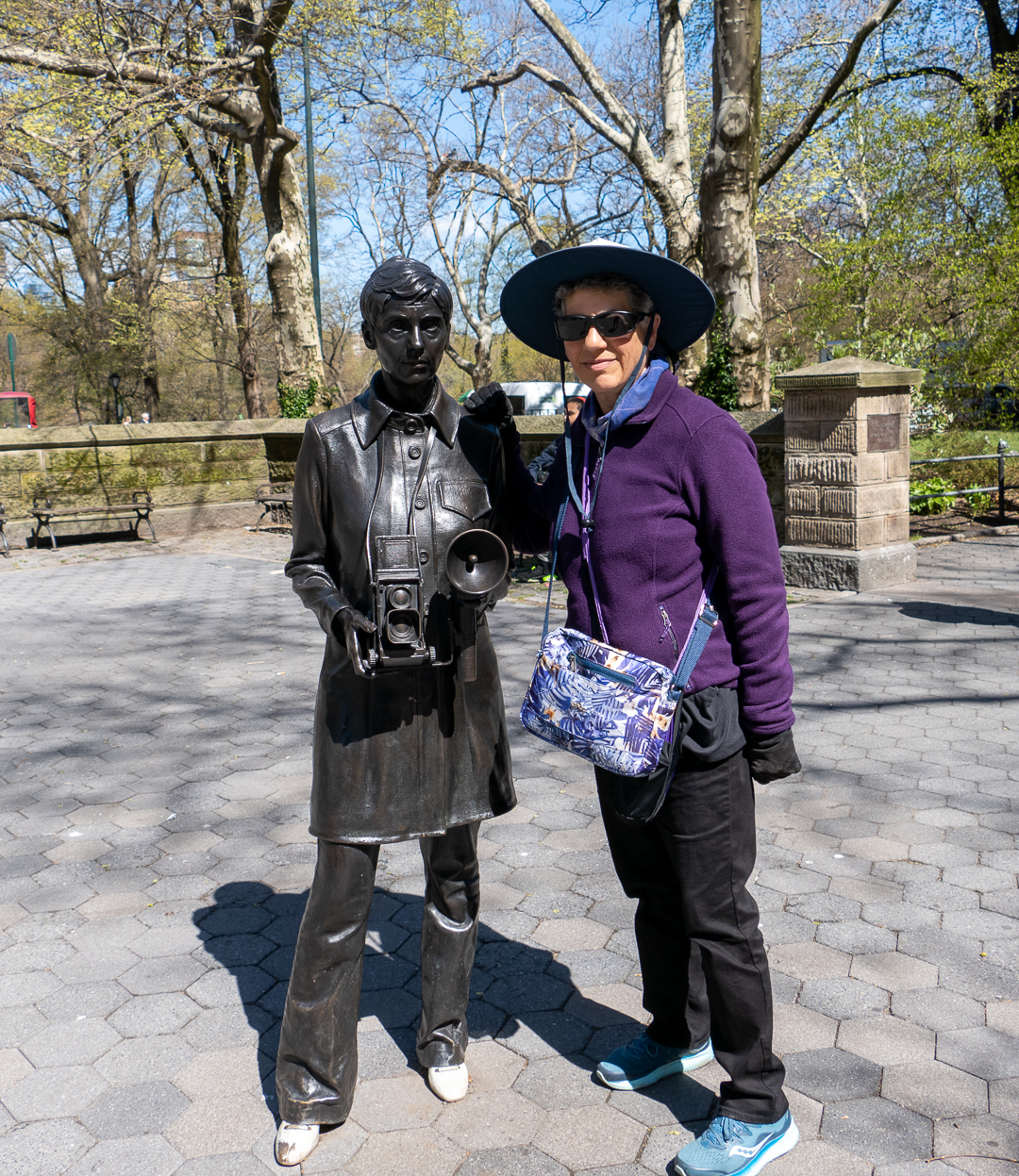 The route took us through the Central Park Zoo. We didn’t have time to go see the animals, but we did enjoy the Delacorte Clock’s performance. 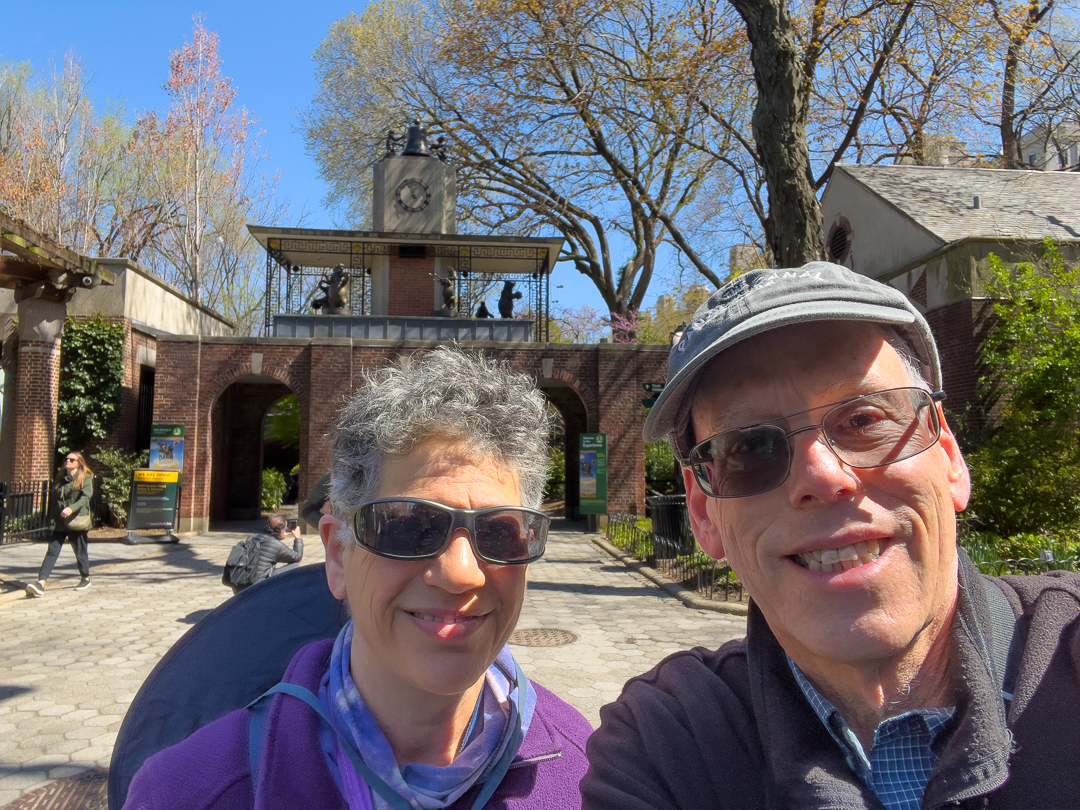 There were, of course, flowers, like this wild daffodil we saw en route to the next landmark, the statue of Balto the sled dog. 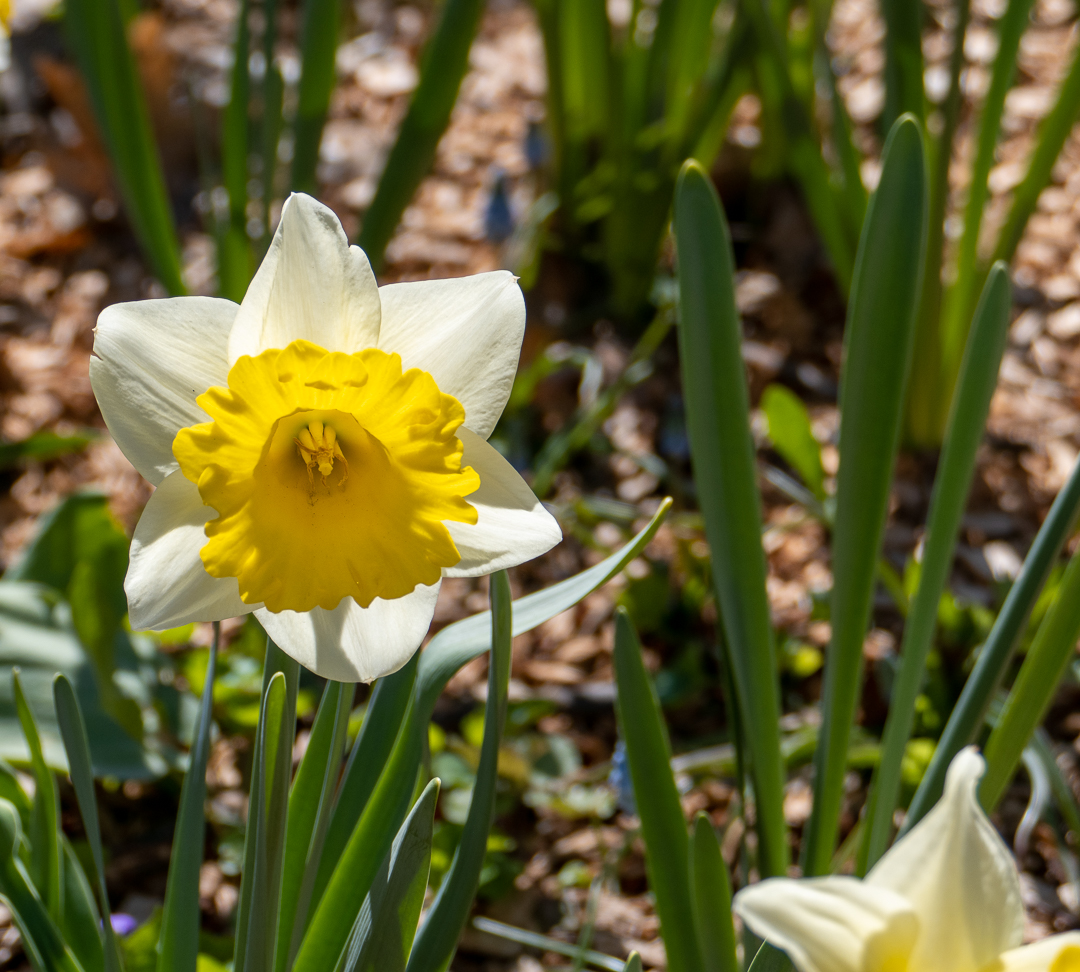 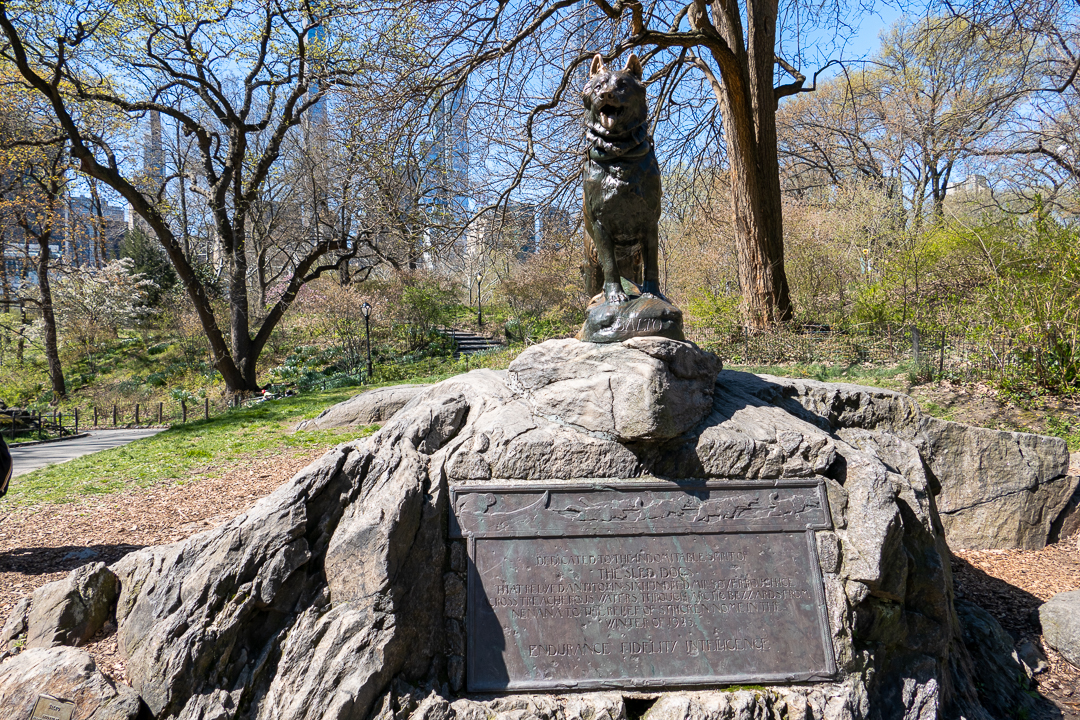 We continued on, passing the Boathouse and the model boat pond, as well as the first robin of spring and some tulips. 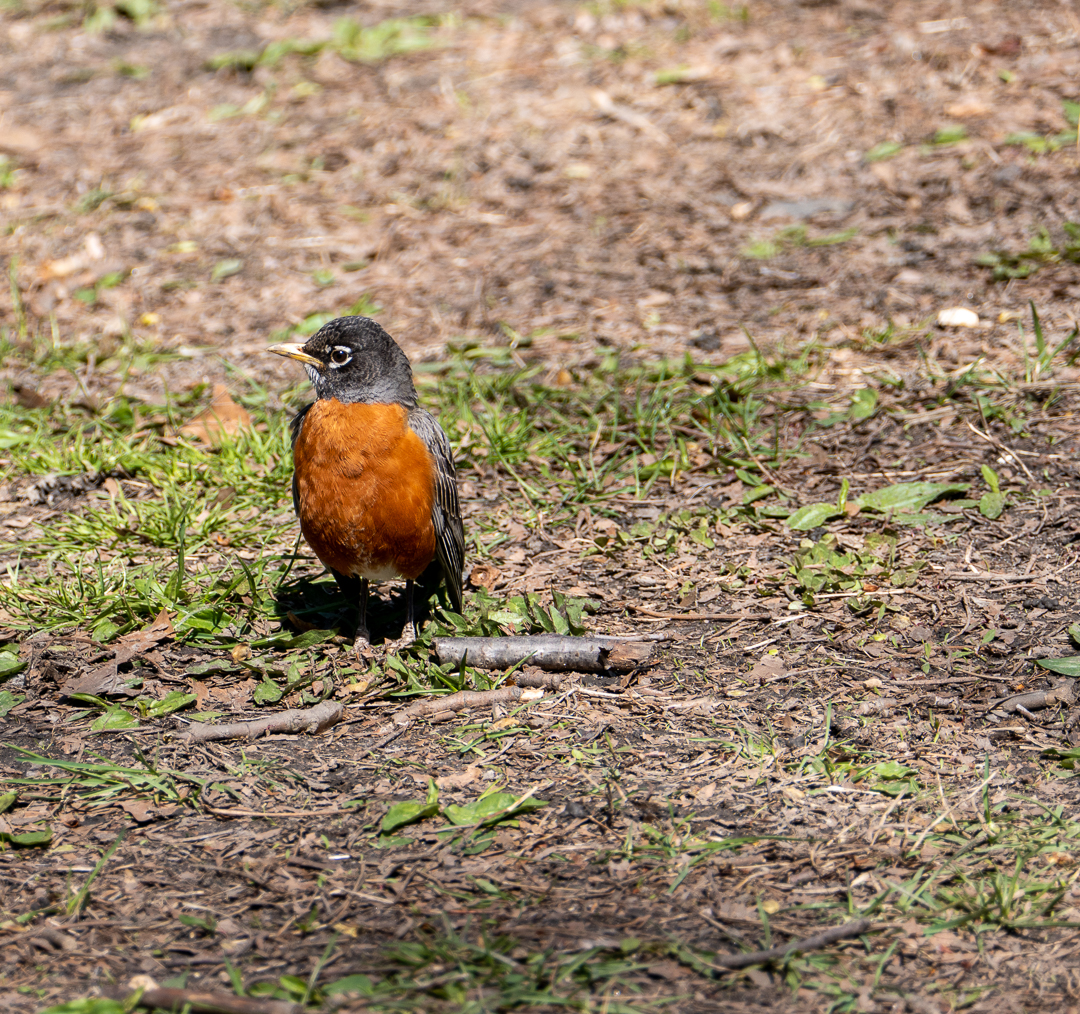 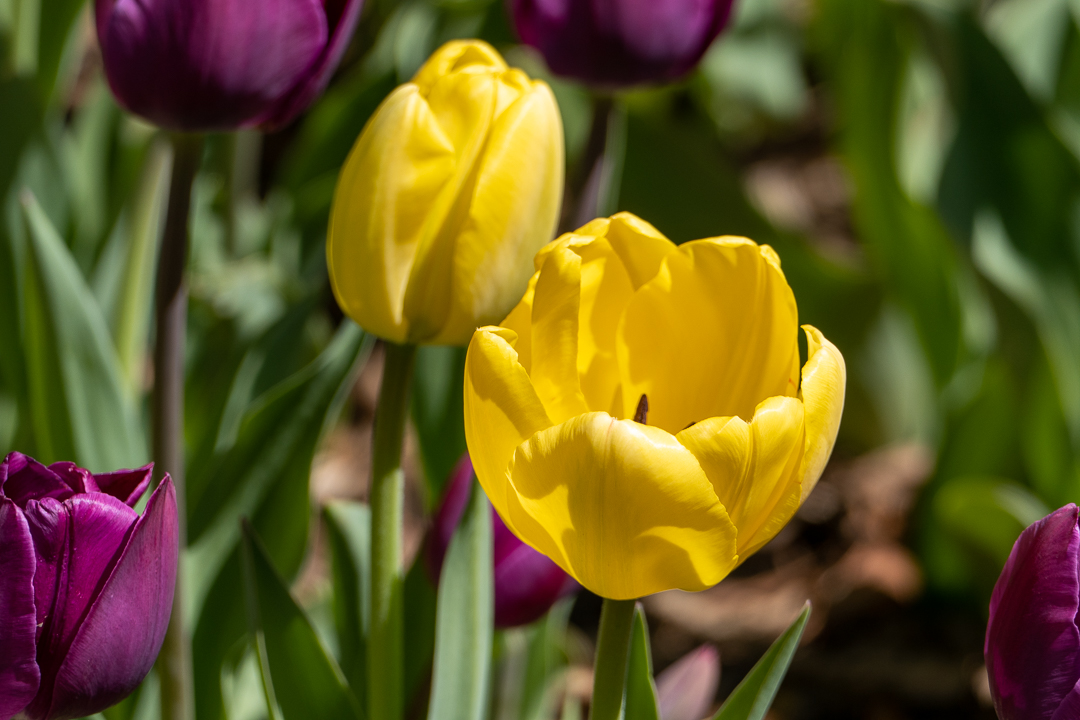 We walked past the Alice in Wonderland 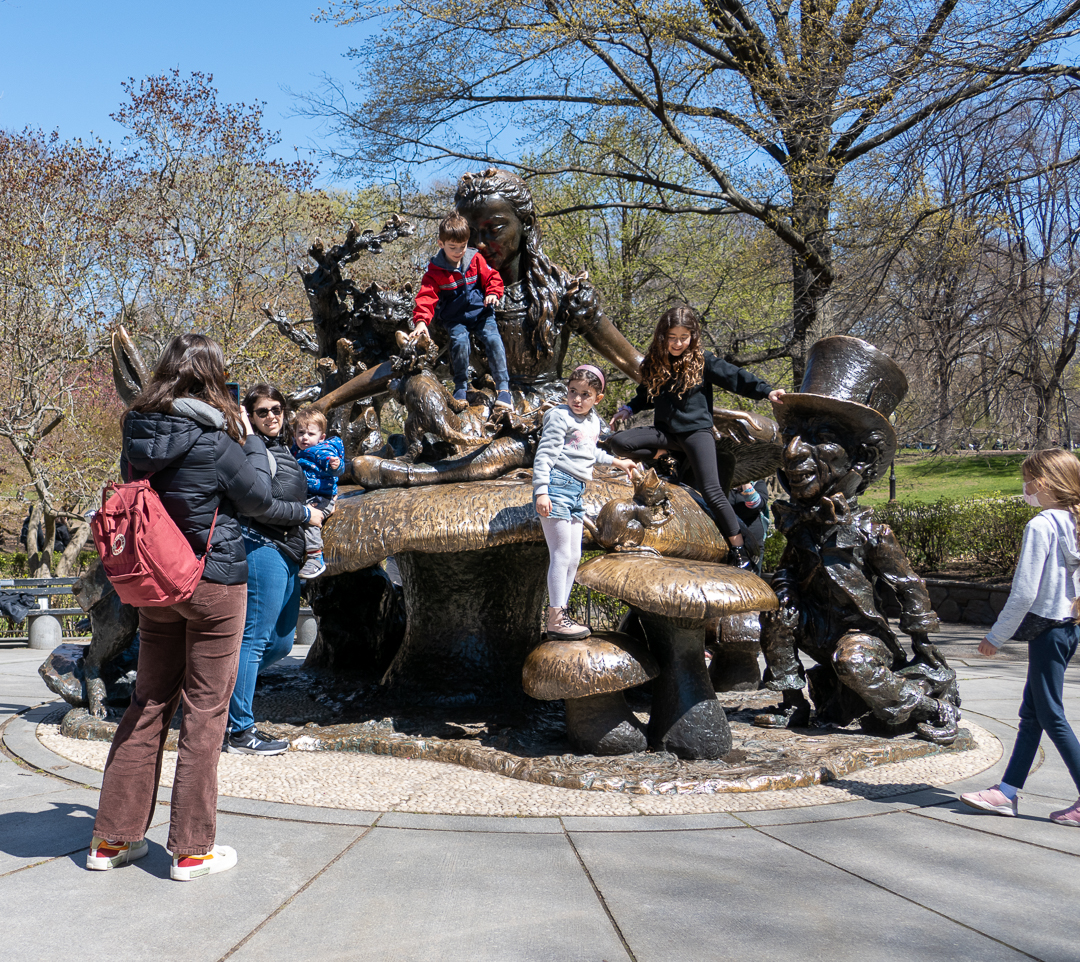 statue and the back side of the Metropolitan Museum of Art before reaching Cleopatra’s Needle. Cherry trees were in bloom, too. 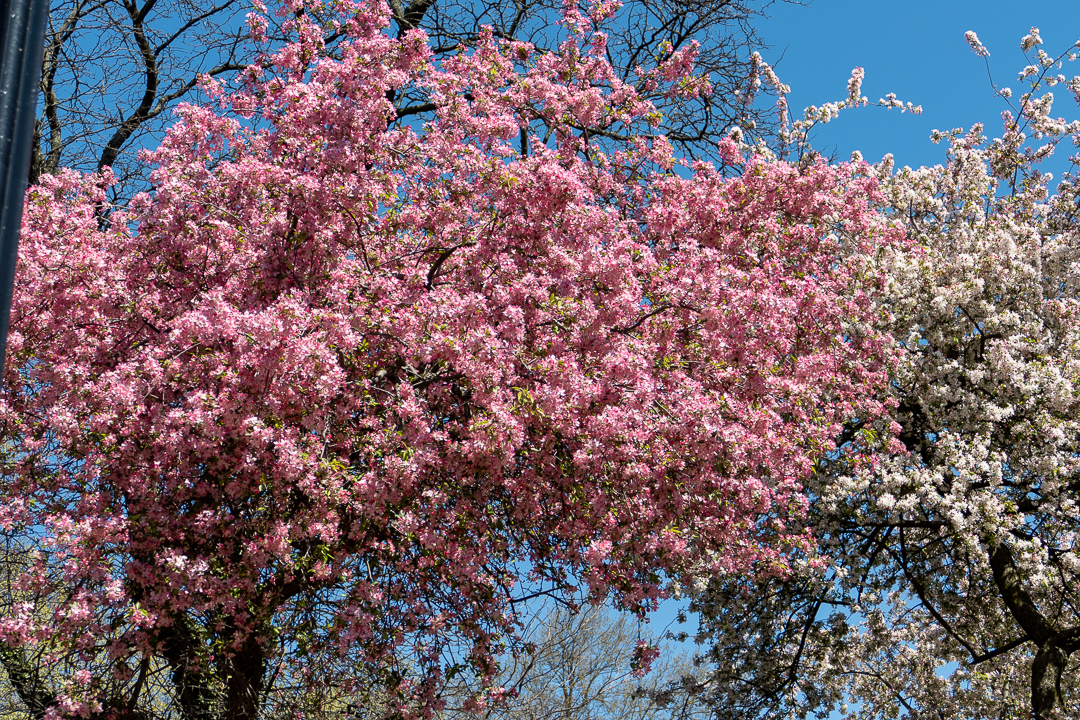 We walked around most of the Reservoir, enjoying the views of the city. 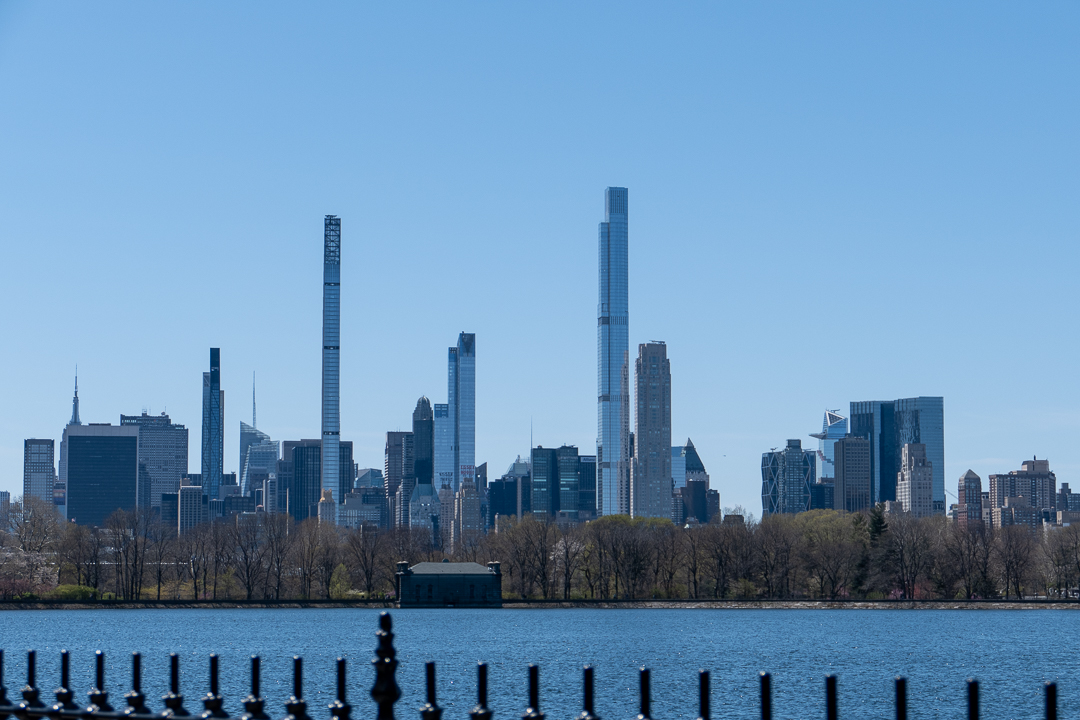 We left the park to walk down Central Park West to the Dakota by way of the American Museum of Natural History and the New-York Historical Society. 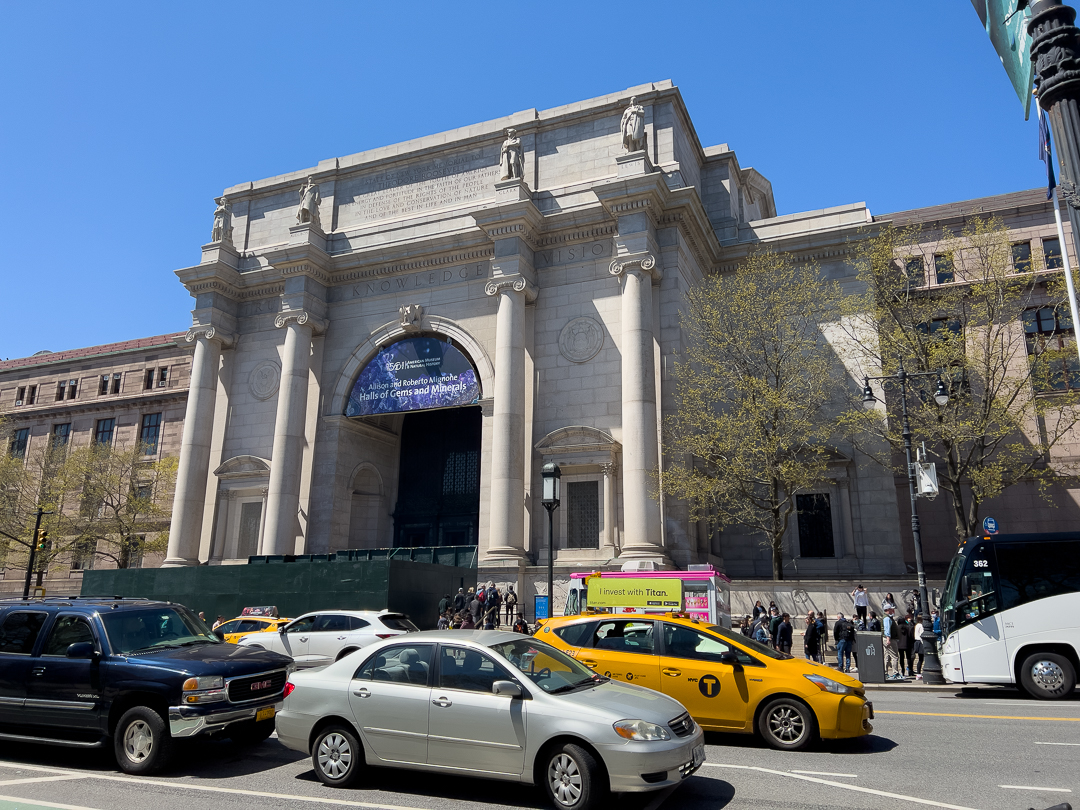 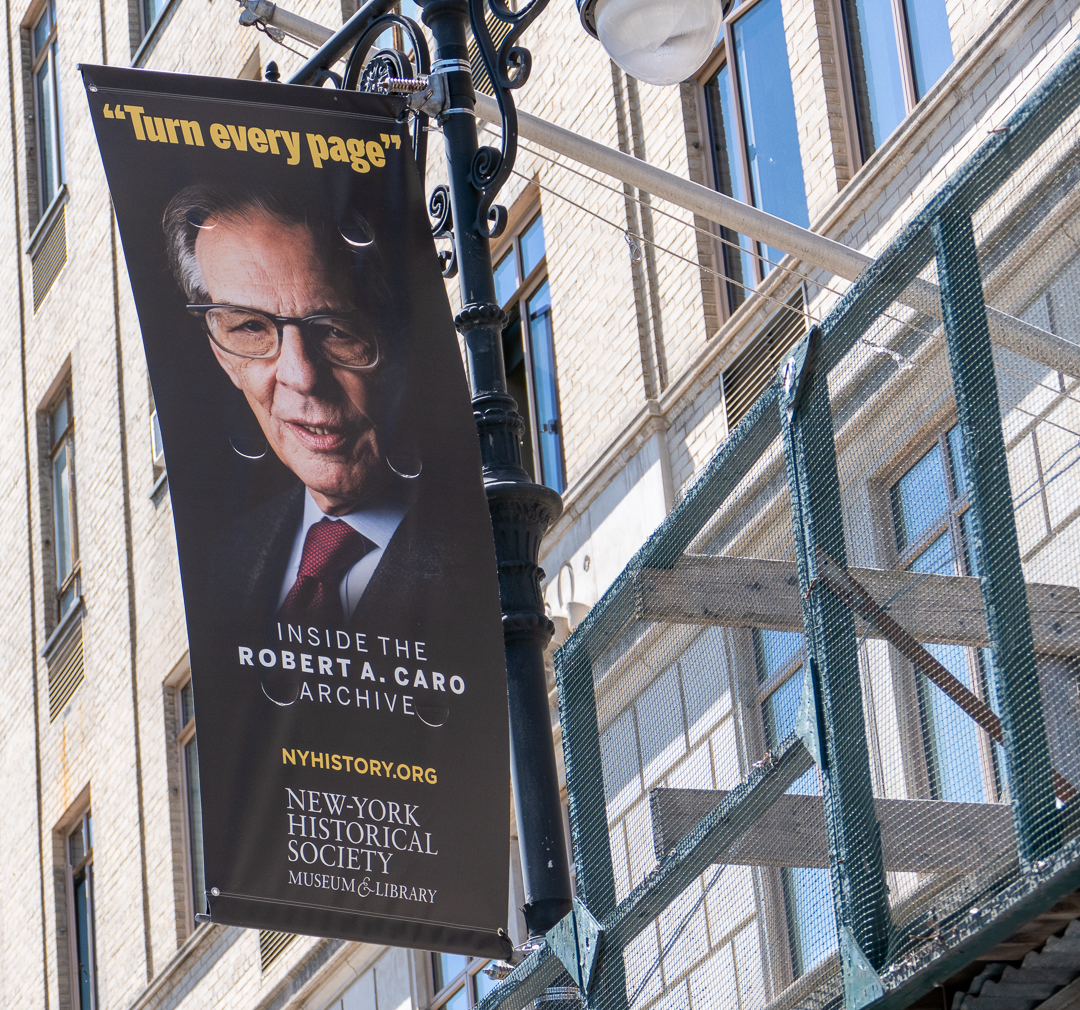 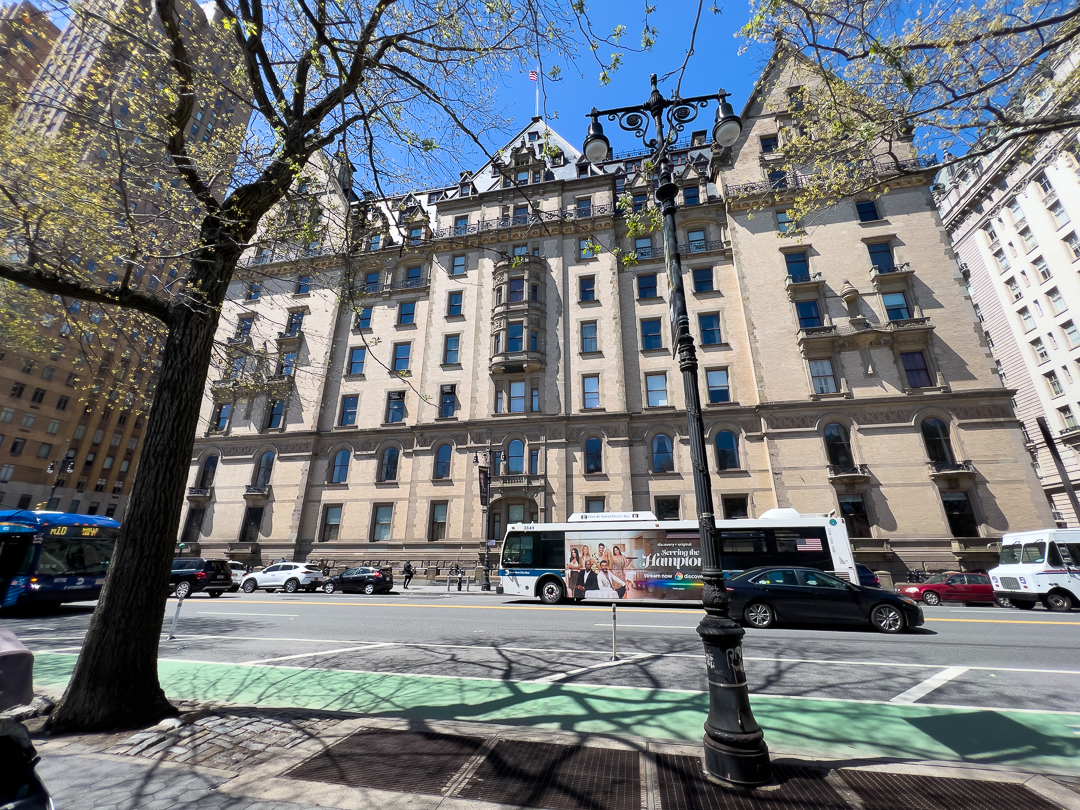 Then back into the park to see Strawberry Fields and the Imagine Mosaic. 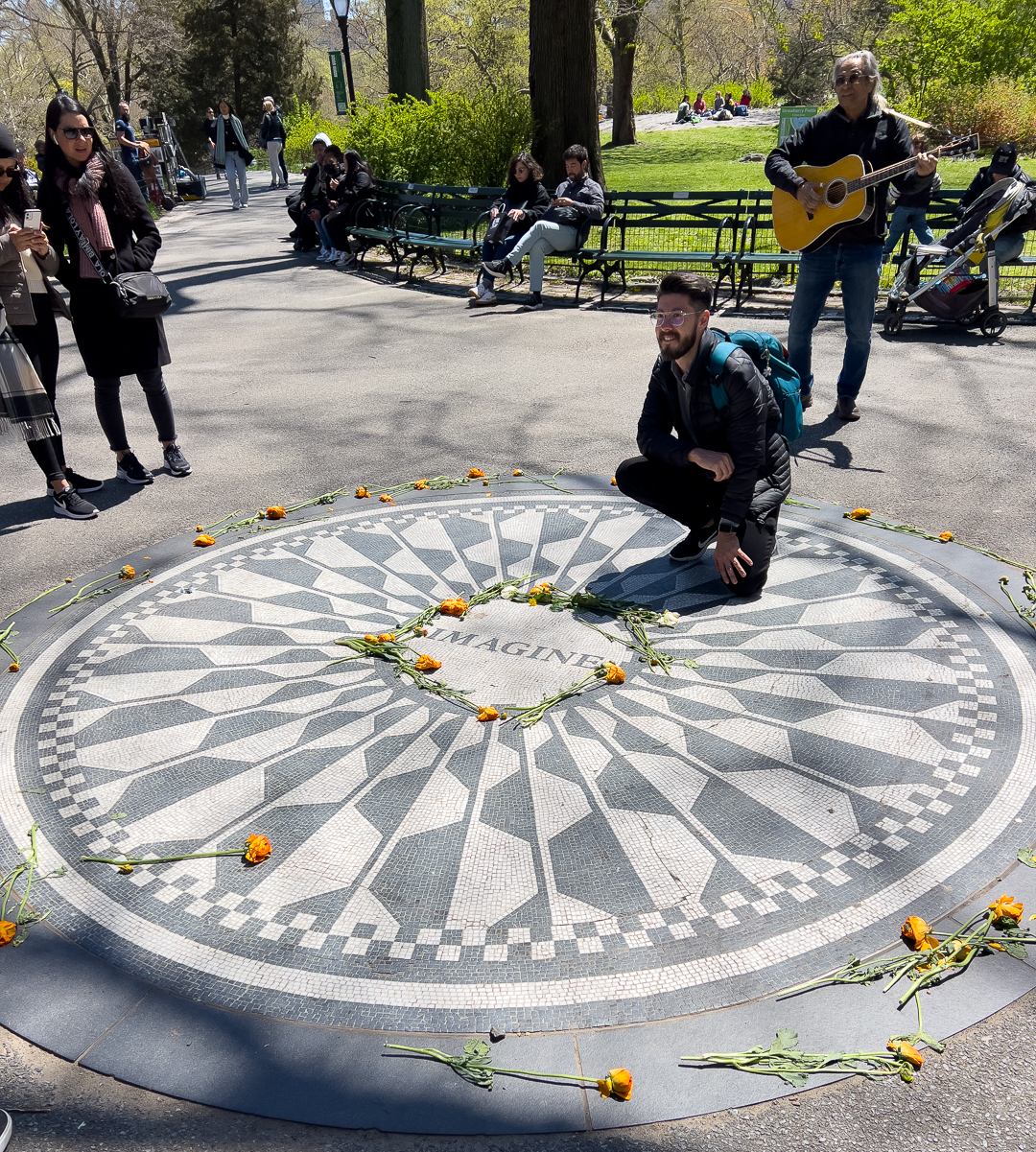 Our last stop was the Bethesda Fountain. We picked up sandwiches from Le Pain Quotidien and ate them in our room in the short time before we had to leave for The Ed Sullivan Theatre and a taping of The Late Show with Stephen Colbert.

We had priority tickets, so we were guaranteed seating as long as we arrived by 4pm. We got there at 3.

A few minutes later, we’d had our tickets and Covid vaccinations checked and received the wristbands that would let us into the theatre.

Once they started letting people in, the line moved quickly. 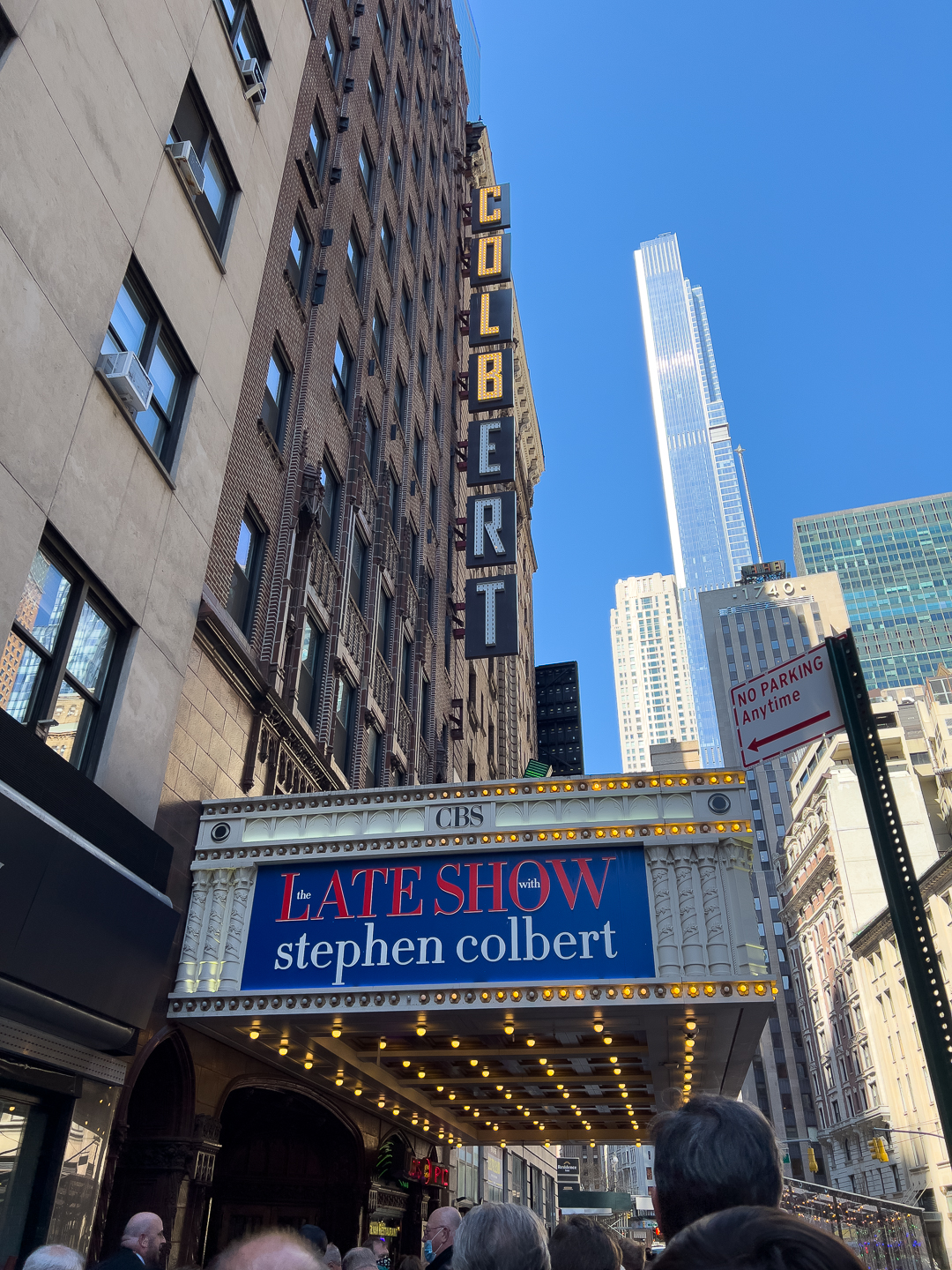 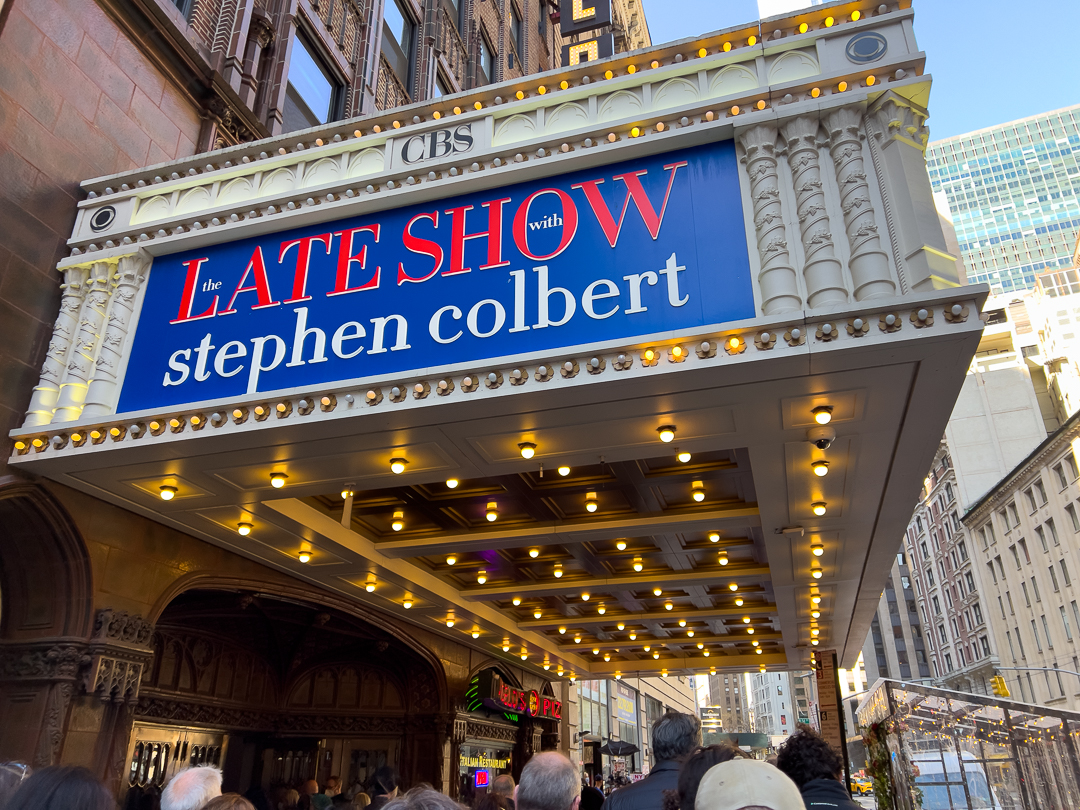 We stayed in the outer waiting area for what seemed like an hour (but was probably only 30 minutes). 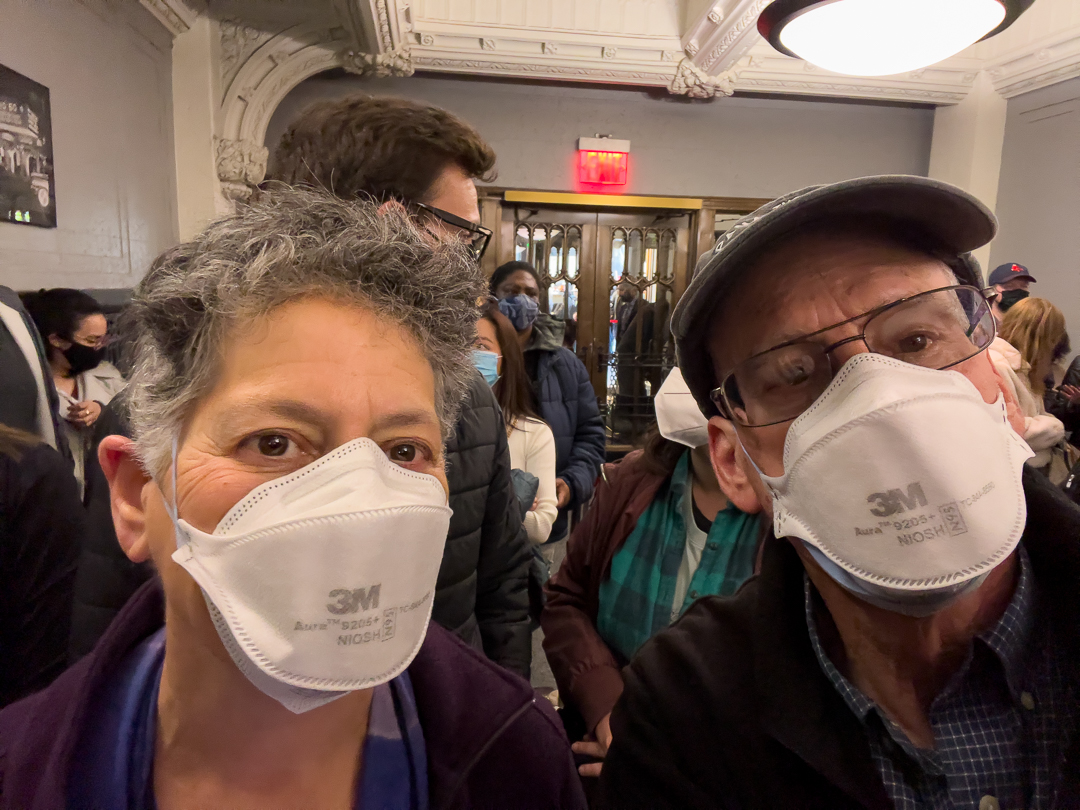 After a first and only chance to go to the bathroom, they let us into the theatre – but we had to turn off our cellphones, so I have no photos. We were warmed up by Paul Mecurio, then instructed on how to be an energetic audience by Mark, the stage manager. And then the real fun started, with Jon Batiste and Stay Human doing a short set, then Stephen came out and did some audience Q&A until it was time to roll tape.

We saw the cold open, heard the credits, and Stephen ran out on stage and the show proper began. It’s live on tape – so there were a couple of re-dos when something went wrong, but nothing major. Alexander Skarsgård was the first guest; they shot the interview in one continuous segment, then they recorded the intro and outro for the commercial break during the interview. Jack White was next – they recorded the interview, then “Maybe Dropping Soon” (which will air some other time, not tonight).

Jon Batiste and the band performed entire songs during each break – they were the highlight of the afternoon.

They set up the stage for Jack White’s first song, recorded it, and then had to reset for the second song (which is in support of a different album, so I expect it’ll air in a couple of months). Stephen took more audience Q&A while they were setting up for the second song – which had to be recorded again due to technical difficulties.

And that was it – everyone left.

I was happy to see a drawing of Ed Sullivan as we left. I’m looking forward to seeing tonight’s show – not to see myself on TV (we were seated in an area that doesn’t get much love from the cameras), but so I can hear the whole show. Often Stephen and his guest kept talking while the audience was still laughing, and we couldn’t hear the first couple of sentences!

If you can attend a taping, it’s a lot of fun – but it’s a long process!